OMA NATIONALS: FOUR IN A ROW FOR WHIBLEY 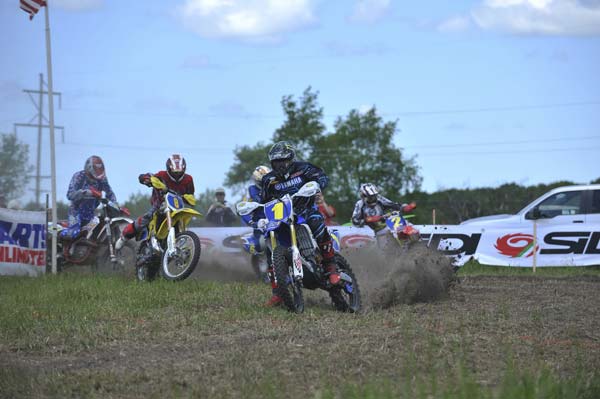 Paul Whibley (1) dominated the Michigan OMA round from start to finish, letting most of the fighting for position go on behind him.

AmPro/FMF Yamaha’s Paul Whibley led the Maxxis Wolverine Cross-country National, round five of the Parts Unlimited Off-road Motorcycle and ATV Nationals, from start to finish outside of Mesick, Michigan. It marked his fourth consecutive series triumph. American Beta’s Chris Bach ran a strong second, keeping Whibley on his toes all afternoon at the Twisted Trails Offroad Park while Obermeyer/AmPro Yamaha’s Jordan Ashburn maintained his perfect record of podium finishes with his third-place ride.

Whibley made things easier on himself–and more difficult for the competition–by decisively snagging the $200 FMF Holeshot Award ahead of RM250-mounted privateer Shane Klimek, American Honda/GEICO Powersports/JG Off-road’s Scott Watkins and the rest of the field.

“It was a good way to start a day,” Whibley noted. He then proceeded to spend the next couple hours maintaining a narrow margin over Bach who never gave up despite riding the final lap and a half of the eight-mile course with no tip on the brake pedal. “We were pushing pretty hard because Chris was back there and he was pushing pretty hard as well.”

One thing that worked in Whibley’s favor, however, proved to be the extensive tight woods sections: “It’s quite tight trees [here] so even though it’s a maybe 10-second lead, it’s hard for him to make up because it’s so slow in a lot of that stuff.”

It’s been a while since Chris Bach has been an OMA regular, but he’s lost little if any of his tight woods skill and finished a strong second.

Bach, who’s concentrated on the GNCCs for the past few years after starting his career in the OMAs, said, “I knew what to expect, obviously, from practice yesterday, but at the same time, in practice I tried to do a lap slow to get used to the trails and I tried to sprint the second lap yesterday to see if my mind would process the tight trees.

“It wasn’t even the same [today during the race]. The first lap today we were going so much faster. I wouldn’t say I was out of control, but I was definitely out of my comfort zone.”

Jordan Ashburn earned third place the hard way after starting dead last. He’s the only rider besides Whibley to finish on the podium at each round so far.

Whibley would end up nearly two minutes faster after completing six laps in two hours, 19 minutes and 32 seconds, with Bach’s time 2:21:28. Ashburn would complete the podium with his 2:24:12, though he did it the hard way after botching the start. “I charged real hard the first lap and went to passing people and got up as far as I could. I knew [the leaders] would be gone because I knew they got a good start and it’d be hard to catch them.” So, he spent most of the day a lonely third, though Watkins nearly caught him in the final miles, the Honda rider finishing less than two seconds behind in fourth.

Husaberg’s Nick Fahringer battled a case of arm pump that saw him go backwards in the pack for a while, though he shook that off eventually and clawed his way to fifth.

Aaron Wegner gets ready to pass pro motocrosser Kelly Smith en route to winning Open A and earning sixth overall. A former OMA Pro, Michigan’s Wegner stays close to home nowadays and was at home in the woods, unlike Smith who simply saw it as a way to get seat time as he prepares for the next Arenacross season as well as a future GNCC.

Michigan’s Aaron Wegner proved the fastest of the locals, taking his Gas Gas EC 250 to the Open A win and sixth overall. That put him a little over 10 minutes ahead of the next A rider, Lite A winner Derek Spangler, with Pro Adam Bonneur splitting them in the overall standings. A riders Ron Sharphorn and Daniel Janus rounded out the top 10.

Though he had some trouble with the tight stuff, Scott Watkins rallied back to finish less than two seconds behind Ashburn for fourth place.