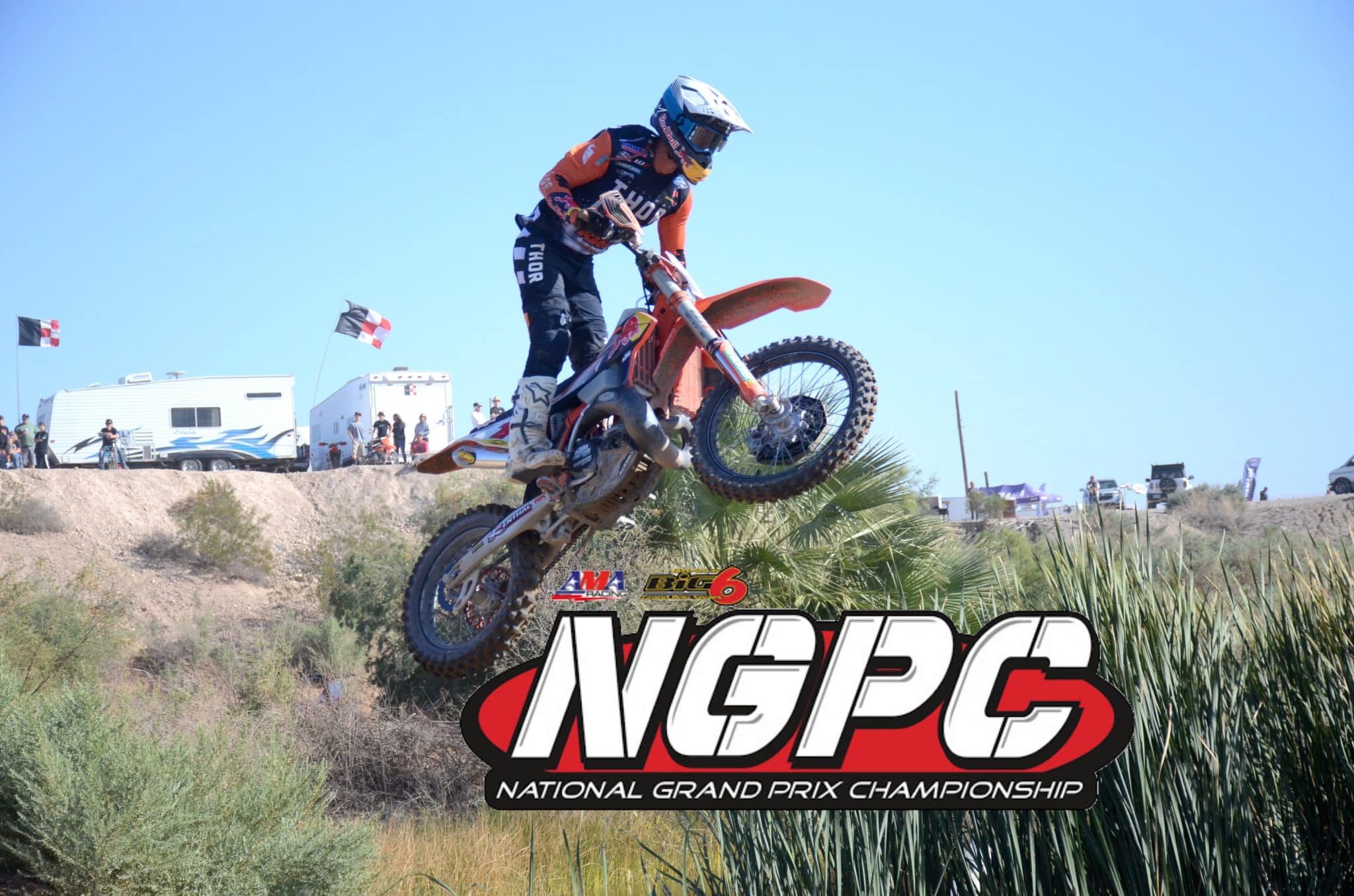 The Vikings M/C and the National Grand Prix series ended their 10-round championship in beautiful Lake Havasu, Arizona. The race location is in the downtown part of Havasu across the London Bridge at Crazy Horse Campground. The course layout is another non-traditional course that is only 3+ miles long, filtered with deep sand and big rocks, and is only one bike-length wide in many places, making it a challenge for most to complete one lap without a tip-over. The layout even skims the beaches of the lake, making it a unique feature that no other rounds have. The weekend’s story was that of the Olivera brothers; both have wrapped up their championships, taking the Pro 450 class and the Pro 250.

Uniquely, Dante Oliveira elected to bring a KTM 300 to the race after asking the boss [Timmy Weigand] if he could do so. Younger brother Mateo made his pro debut in the premier class, which made the class that much more exciting to watch. The weekend saw a sold-out parking area and over 800+ racers on the race course, making it one of the most challenging courses of the year.

The 450 class saw some of its best racing all year long. Dante Oliveira captured the holeshot on his Red Bull/KTM 300 and led the opening lap with Kilmartin/Husqvarna Justin Hoeft in tow. Behind them was a freight train of racers; Austin Walton, Mateo Oliveira, Trevor Stewart, Dare Demartile, and Tyler Lynn, all within a 15-second gap, trying to capture the podium positions.

Lap three saw a lead change; Justin Hoeft made his move on Dante and started to open up a small cushion of comfort. Factory Husqvarna’s Austin Walton also moved around the KTM rider and tried to reel back Hoeft. Unfortunately, the Kilmartin racer made a slight mistake exiting the pits that saw him tuck the front and slide out, giving the lead back to Dante Oliveira. Scrambling to get himself back into the race, Hoeft watched Mateo Olivera, Austin Walton and Trevor Stewart all go by within 10 seconds before he could get going. As the laps started to click off, the racers finally spread out, and the top three leaders had created their pack at the front. Dante elected to take an early pit; the KTM factory rider on the two-stroke 300 watched Walton and younger brother Mateo ride by as he grabbed a quick splash of fuel. As the riders approached the pit area again, Walton and Mateo rode into their pits and saw Dante ride straight back into the lead. Dante unleashed the hammer and never gave the lead back to Walton. There were a few charges by the Rockstar/Husqvarna racer, but none was ever close enough to pressure Dante into a mistake.

RPM/KTM racer Mateo Oliveira finished a solid and respectable third overall in his first NGPC in the pro division. The move by Dante Oliveira to run a KTM 300 was a power move; he has had a year that most riders could only wish to have. To show up at Havasu on a two-stroke and win was a sign that he could win on any bike and any course that the National Grand Prix series has.

The Pro 250 class was just as exciting as the premiere class. With class champion Mateo Oliveira racing the 450 class, it led doors for new racers to nab their first win. Returning to the series was RPM/KTM racer Gus Riordan; Gus has been racing on the east coast this year at the GNCC series but made his return to Lake Havasu. It didn’t seem, though, as Gus had skipped a beat. After grabbing a second-place start, Riordan passed early leader Justin Seeds and never looked back. The RPM/KTM racer looked to be doing what his teammate Oliveira had been doing all year, getting to the front and trying to pass as many 450s as possible. As he started hunting down the pro pack, the swarm of the 250s were fighting for the remaining podium positions.

Kilmartin/Husqvarna Kai Aiello, SLR/Honda Parker Ross, Gainslinger Kawasaki Cole Zeller, and SLR/Honda Jack Simpson were all in a bar-banging battle trying to trek down Riordan. The four-pack of racers could be seen one by one swapping positions with each other countless times over the ruthless track. Parker Ross finally broke just a tad free from Zeller and Aiello; Ross solidified his position as Zeller and Aiello couldn’t match pace.

The battle for third was on; the last half of the race saw Zeller and Aiello only 3 seconds apart. As the two went out on their last lap, Aiello was pressuring Zeller with the margin only a bike length apart. The Gainslinger rider held off the hard-charging 3-Brothers racer from grabbing his first podium in the National Grand Prix series. Riordan won with ease and made his way up to 10th overall on the day.

The women’s pro race was a story that’s been told all year long; Brandy Richards showed up to race on a KTM 125SX. Oddly enough, the track at Havasu is tight and technical, which almost made her go faster on the 125. Nevertheless, she went on to win the Pro class as she has nearly all year. The weekend story was that of JCR/Honda rider Tara Geiger. Tara raced her last professional race and will retire from racing professionally. One of the most diverse racers to ever race a motorcycle competing in XGAMES, ISDE, NATIONAL MOTOCROSS, and the first female to backflip a bike, to name a few. She finished 2nd place ahead of RPM/KTM racer Kaitlyn Jacobs.