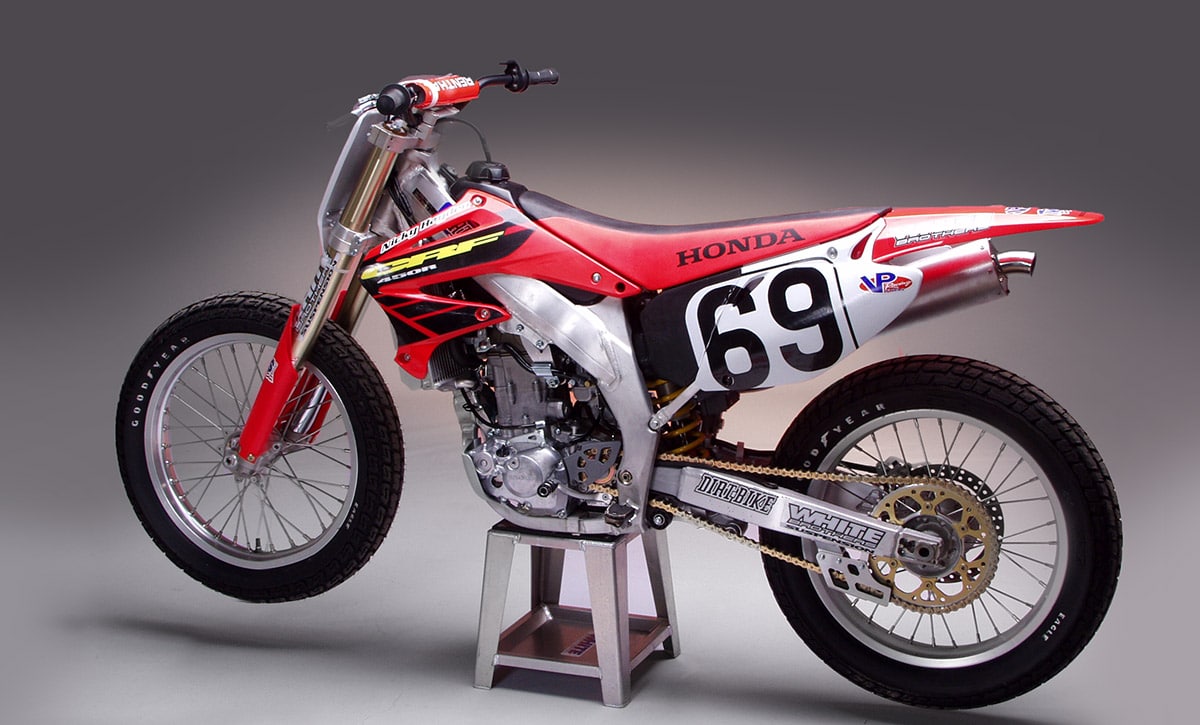 Late in 2001, Gary Jones, Chuck Miller and Nicky Hayden conspired with Dirt Bike Magazine to build an especially off-beat project bike: a dirt-track CRF450R. The bike was set up to run in the Formula USA/SFX National Dirt Track Series, which was designed around 400cc  four-strokes and allowed restricted Rotax 600s and Yamaha 426s to run against bikes like Suzuki DRZs. The idea was to get a wider variety of bikes into the winner’s circle, and it certainly did that. Terry Poovey was dominating the series with his ATK, but dicing with everything from the usual Wood Rotax dirt-trackers to CCMs and any number of Japanese bikes. Through most of the series, those numbers hadn’t included Honda. That would change.

Gary Jones took the project as a personal challenge. After building a YZ250F flat-tracker for Dirt Bike the previous year, Jones learned a lot about the subtleties of swingarm angle and what it took to make an effective MX-to-dirt­ track conversion. Honda racing manager Chuck Miller was convinced that he was the right guy for the CRF project and that 20-year-old road race star Nicky Hayden was the right rider, and he put the wheels in motion for a brand-new CRF to be delivered to White Bros. At the time, the Honda CRF450R was unreleased and highly anticipated. The first steps of the project were straightforward enough. The suspension was lowered and 19-inch Talon wheels were installed with Goodyear tires. But the motor was the biggest project. In order to make it legal,  the Honda’s 40mm Keihin carb had to be restricted to 37mm. The rules are very specific about where and how the restrictor was to be placed. Jones got on the phone and did some research. He talked with dirt track guys, stock car guys and anyone else who had experience with restrictor plates. It turns out that if you just stick in a restrictor plate without knowing what you’re doing, you’ll have a big disadvantage. The science of air flow and turbulence is very mysterious. Jones learned that a groove cut on the inboard side of the plate could create a tiny vortex effect and actually facilitate better air flow. The trick was to make the groove the right width and depth. That took dyno time. Jones also designed a custom E-Series exhaust system. The standard White Bros system is designed for motocross, as it should be. The Jones version was designed more for peak power output. Power manageability, that would be Hayden’s problem. On the White Bros. dyno, the bike produced 51 horsepower–about three more than an unrestricted CRF450R.

Then Jones and Hayden started experimenting at Ken Haeley’s ranch, where  they could turn lap after lap on a private flat track. They tried different footpeg locations, different handlebars, different suspension. Was the bike going to be competitive with a purpose-built dirt-track hardware?” “I don’t know,” admitted Hayden. “It’s fast, but it doesn’t always hook up.”

“If I had more time, I would design  a shorter swingarm,” said Jones. “Then it would get better traction, But right now, there aren’t any parts in the country, so I don’t want to risk cutting up the stock swingarm. 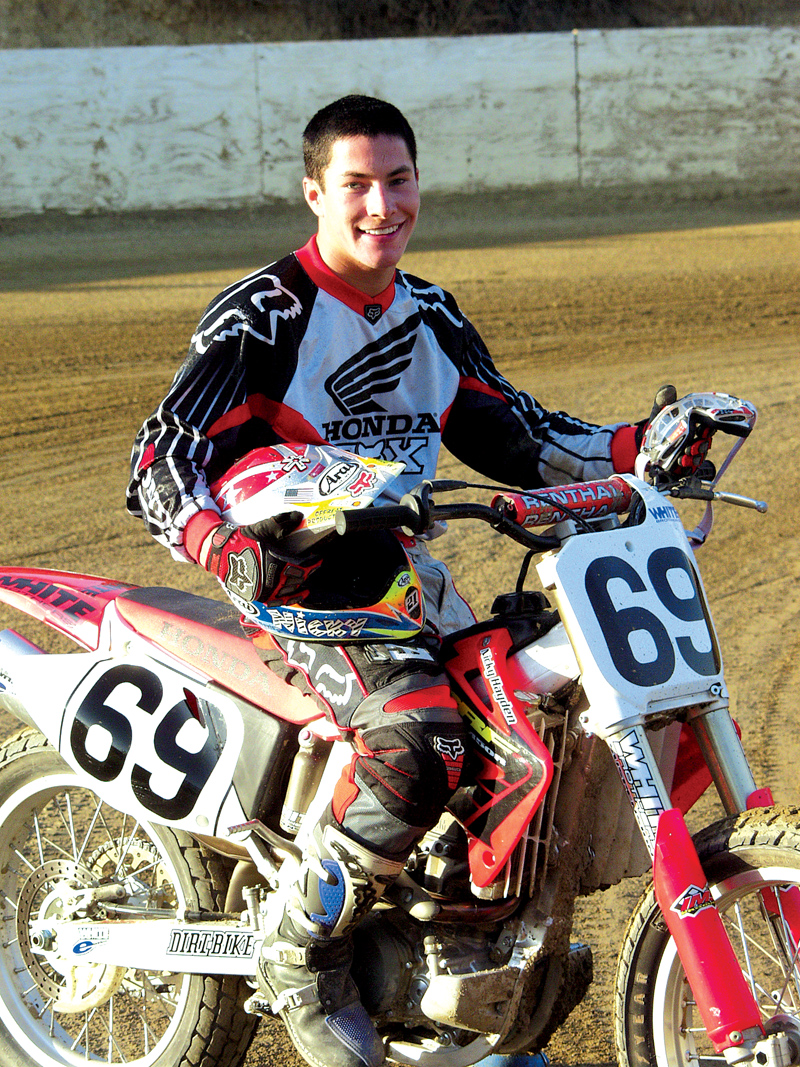 “This weekend” was the inaugural Del Mar short-track as well as the Pro­ Singles Mile in San Diego, California. They were the last two rounds in the Formula USA Dirt Track series. Terry Poovey had a commanding lead in the points and had to finish eighth or better in one of the two races. When Hayden entered the short track on the Dirt Bike/White Bros. CRF  he was regarded as a complete wild card. He was a road racer on a motocross bike thrust into the middle of a points race.

No one took Hayden seriously in his heat. He came off the line poorly on the unfamiliar bike and got rattled around by the field of veteran short-trackers. He would have to take his shot at the main event from a semi, where only the winner would transfer. Hayden did what had to be done; he won. That increased his confidence. He began to feel he could run up front. That set the stage for an epic battle in the main. Hayden started slow while Rich King battled up front with Poovey. One by one, he picked off riders. Hayden would generally lose time in the turns and make it back up on the straights. Then he began going deeper and deeper into each turn and getting completely sideways on the exits. It all came down to the last lap: Poovey was leading and Hayden was on the outside hoping to slingshot into the lead at the finish line. But at age 43, Poovey is no sucker. He took the young­ster right to the wall to clinch the win as well as the National championship. It was one of the best races of the year.

The same racers met again the next day on Del Mar’s mile track. The trac tion wasn’t quite as good, putting the already spin-happy CRF at a disadvantage, but Hayden still managed a fifth in the main. Not bad. 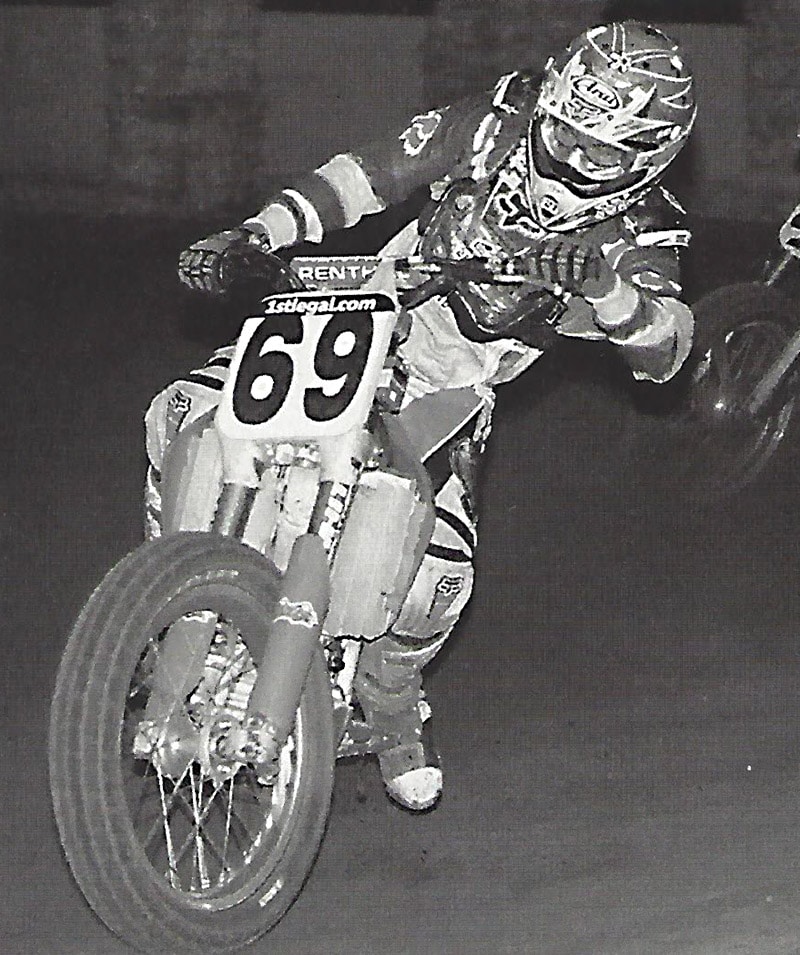 Frankly we never expected that much success out of the project. It all made sense the next weekend, though, when we finally got a chance to ride the bike. It was a rocket! The CRF had been boosted to 600-level performance. We started asking more questions about restrictors and the mysterious groove in the intake manifold. Would it work for a motocrosser? Would Jones build an MX version for us?

Gary just smiled. “I think I’ll build one for me, first.” 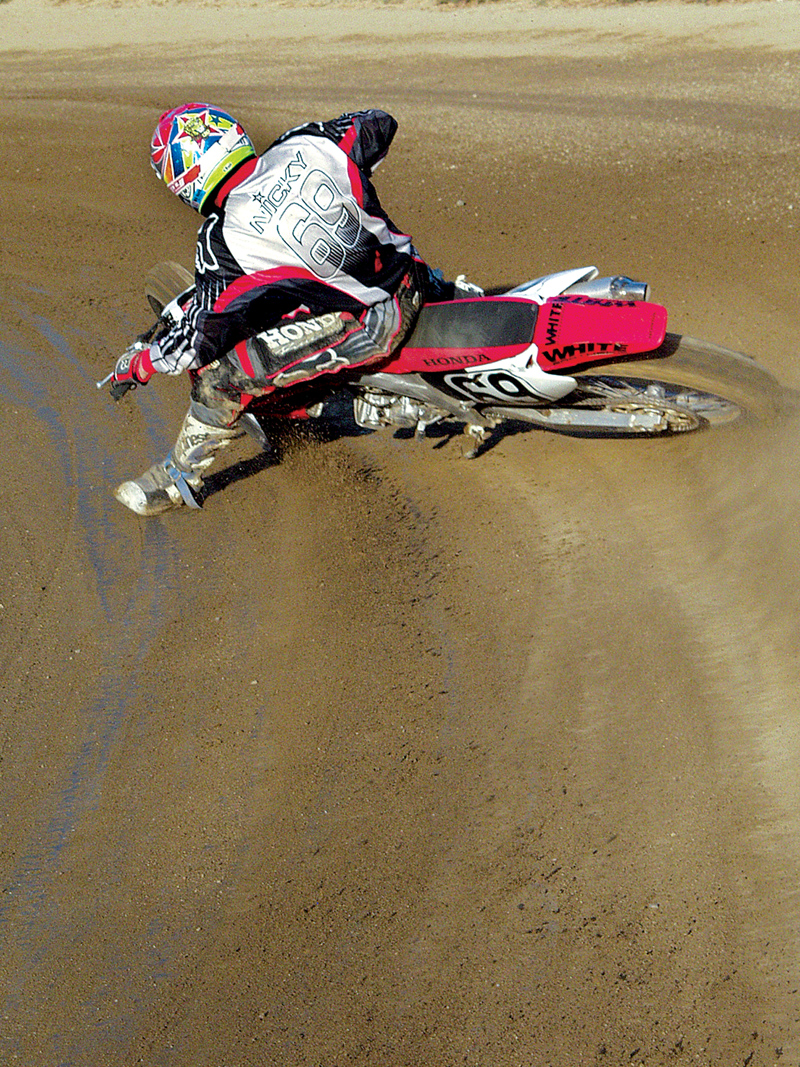