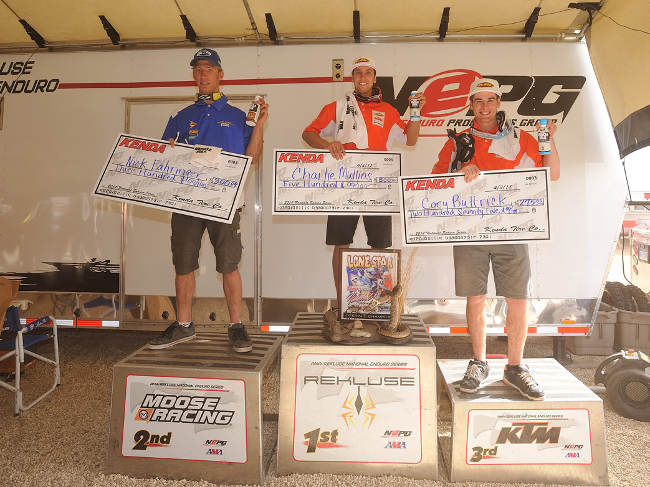 Husaberg Factory rider Nick Fahringer earned his career best finish with a 2nd place result at the third round of the AMA National Enduro Series held in Kalgary, TX.

The Lone Star Enduro was the most demanding of the three rounds raced this season. The temperatures were in the mid-nineties with high-winds. Riders described the course as hard-packed, very dry and rocky.

Fahringer and his teammate, eight-time National Enduro Champion, Mike Lafferty, started the day off well turning top five times in the first test. The second test was made for the Husaberg riders as Fahringer took the win and Lafferty finished in 2nd just 6 seconds behind him. “I felt great all day. The course was very hard-packed which made it quite slippery but my Husaberg seemed to hook up well all day,” stated Fahringer.

Fahringer placed 3rd in the next two tests, while Lafferty was able to put together two more solid 2nd place results in test three and four. At the start of the fifth test, both Lafferty and Fahringer were sitting in great position to fight for the win alongside KTM’s Charlie Mullins.

In the fifth test, Lafferty encountered mechanical problems which caused him to withdraw from the race. His teammate, Fahringer, continued to push forward and finished the fifth test in 6th position. “The fifth test was a short, fast section. They took part of a GP course from an earlier race and ran us through that section,” commented Fahringer. “I rode pretty decent in the section but didn’t quite have the speed that Mullins did through it and I lost some valuable seconds.”

Fahringer redeemed himself in the final test earning another 2nd place time behind event winner, Charlie Mullins. Fahringer’s consistent performance throughout the day put him in 2nd overall for the race resulting in Fahringer’s best career National Enduro finish.

“It feels great to get on the podium and to finish 2nd overall today. I am bummed that my teammate suffered from some problems and hope to see him back up front at the next round.”