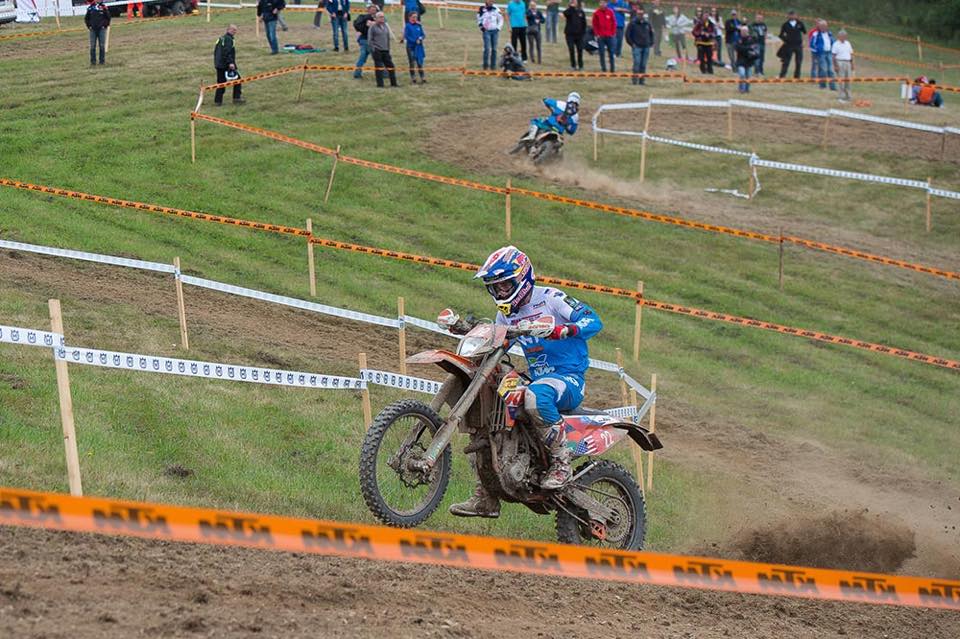 Here’s what Taylor Robert had to say about the ugly turn of events at the ISDE:

“Four days into ISDE, and there has been so many ups and downs that it’s hard to believe everything that has happened. It all started last week when I had a really bad crash on the practice day. I hit a piece of concrete that was hidden in the grass and it sent me straight over the bars and really jacked up my shoulder. It was a super violent crash and luckily my bike took most of the hit bending the subframe, exhaust, triple clamps and radiator. Heading into day 1 I wasn’t even close to 100% but I knew our team had a good shot at getting an overall win so I was going to give it all I had. Day 1 was ok nothing special but nothing terrible for myself but for the first time that I’ve ever seen, team USA came away from day one with the lead. Day 2 was awful for me and I had my worst finish at ISDE since my first one in 2010. I totally reset and went into day 3 with a better mindset ready to throw down. I started the day off better and after the first test I knew it was going to be a good day. Unfortunately between test 1 and the first time check myself and 7 other of the worlds best riders got lost and ended up on the transfer from the the previous day due to some very poor course marking. We all stopped and realized we weren’t on the right course but we knew that we were tight on time and we had to get to the time check instead of back tracking. We all ended up missing a punchcard checkpoint and all 8 of us got disqualified which we didn’t find out until late last night. Meanwhile my test times were getting better and better and then our team had another setback. Kailub Russell popped his knee out of place in test 2 and completely destroyed his bike in test 4 and would be out for the week. The rest of the team hammered down and we actually gained time on Australia for the overall even without one of our strongest riders. Last night the AMA and all other countries involved in the disqualified riders (France, Spain, England, and Italy) all appealed the FIM decision to disqualify us. This allowed all of us to start on day 4 but our scores will not be counted until a final decision is made by the FIM. Since I pulled my act together on day 3 and got 3rd overall on the day I was able to start on the front row with my good buddy Ryan Sipes today (who is seen shredding this grass track in the background of this pic) I took my momentum from day 3 and kept charging all day. Only to find out before the first test that Thad Duvall’s bike broke and our team was now completely out of the race no matter what the FIM decided on the disqualification. With all of this bad news, I just decided to go out and use this race as practice because I will be back hungrier as ever. I rode really well all day and came away with 2nd overall on the day and Ryan absolutely killed it and stretched out his overall lead. Tomorrow I get to start on the front row again with Ryan and we are going to go out there and just have a good time.”

Great Britain’s David Knight, who also was excluded, had this to say:

“ISDE day 4. As you might have seen us riders that got DQ’d yesterday have been allowed to continue under protest, I owe it to the GB team and helpers and all the Knighter fans here to continue the race. This morning I changed my front forks and different compound Metzeler front tyre and have had a great day, 3rd overall and also in E2. I relaxed and treated the day as a test session and finally had a day that I know I’m very capable off. I’d like to dedicate today to a friend Sandor Bitti Bitter who passed away yesterday. Cheers all for the support.”