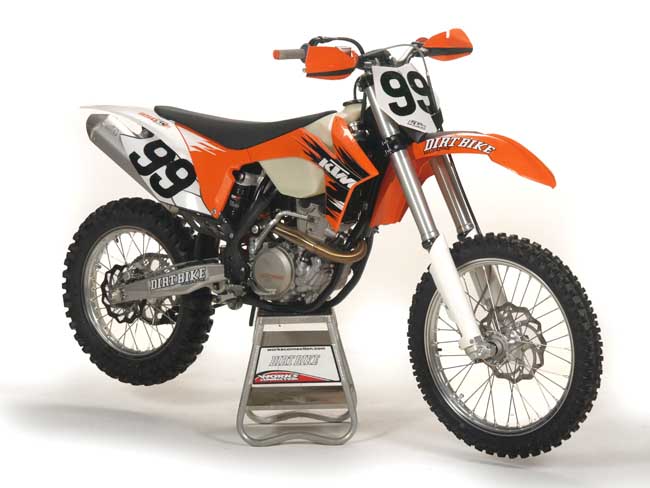 KTM presented two new models this week: the 350XC-F and a reborn 250XC-F. The company kept both models under wraps until now, but an off-road version of the 350 was a no-brainer. The bike that Tony Carioli used to win the MX1 world championship this season was perfectly suited for off-road riding and racing. A new 250XC-F was presented as well, and it’s a very different bike from the 250XCF-W currently in the line up.
Up front, some definitions are in order. The “XC” models are considered closed-course, competition bikes, virtually off-road versions of the motocross bikes. When the “W” suffix is added, that’s considered a trail bike, at least by the U.S. government. It meets EPA emission standards and is approved for operation on federal land. So the two XCs that KTM just announced are targeted specifically at racing. As such, they share most parts with the SX-F motocross bikes. In the case of the 350, that was an all-new bike released late in 2010. The motocross version was a fuel-injected bike with electric-start and full-linkage suspension, departing from the PDS design that KTM used for years. A fuel-injected 250SX-F motocrosser which also used linkage suspension followed in 2011. Unlike the 350, the 250 was kickstart-only with no electric starter.

In order to make the two motocross bikes into off-road racers, KTM’s biggest job was to give them redundant starters; they had to have both electric and kickstart. In the case of the 350, that meant grafting a kickstarter in place while the 250 needed an electric starter. Then wide ratio, six-speed gearboxes were designed. The 250 was already a six-speed, but the gearbox ratios were widened. The 350 started off as a five-speed, so a whole new gearbox has to be squeezed into the cases.
The rest of the motor components are the same as the motocross bikes. They have the same cam, the same compression, the same ignition and even the same pipe. As with the motocross bikes, the EFI system has three maps. With an aftermarket switch, you can alter the bike’s output slightly. The default map splits the difference between a mild map and a hot one.
The XCs also got 2.5 gallon fuel tanks, 18-inch rear wheels and kickstands. The suspension was revalved with off-road settings, and softer fork springs were used up front. The 350 and 250 share identical suspension components.

We were preprogrammed to like both bikes. A 350 off-road bikes has been on our wish list since the first rumors of the motocrosser came out. And the new XC didn’t disappoint us. It has a super long powerband. It makes low-end power that’s much more well suited for off-road than it was for motocross. On the MX track you can’t hang out below 7000 rpm; you just don’t have the time. But in off-road situations, that smooth, low-rpm output is perfectly  usable. And it still has the crazy top end. It just keeps going and going. On the trail, most riders will never get near the rev limiter. There’s no reason. But these bikes will doubtlessly see the track as well, and when you scream the 350, it’s almost like having another bike. Just like the MX version, there’s another level of power way up around 10,000 rpm.
The 250 is a more focused bike. It has to compete with a 250cc four-stroke that already exists in KTM’s line. The “W” is actually a very different bike, beyond the fact that it has a carburetor and no-link suspension. It’s in a milder state of tune, has wider gear ratios and even the engine cases are different, with a more massive electric starter.
But on the other hand, the EFI is smooth and hiccup-free. KTM seems to have avoided the harsh on-or-off power delivery that EFI bikes from Honda and Yamaha exhibit. The only time we experienced a pop-and-die was when Kyle Redmond got the bike absolutely vertical. The electronic brain is programmed to kill the bike if it’s left on its side for more than 30 seconds, but Kyle’s vertical time was much less than that.
Overall, we’re pumped with the two bikes. The 250 is exactly what its supposed to be: a racer. The Kailub Russells of the world will love it. The 350 is all that and more. It’s a legitimate trail bike as well as a racer. For more information, check out up coming print issues of Dirt Bike.
Share FacebookTwitterGoogle+ReddItWhatsAppPinterestEmail