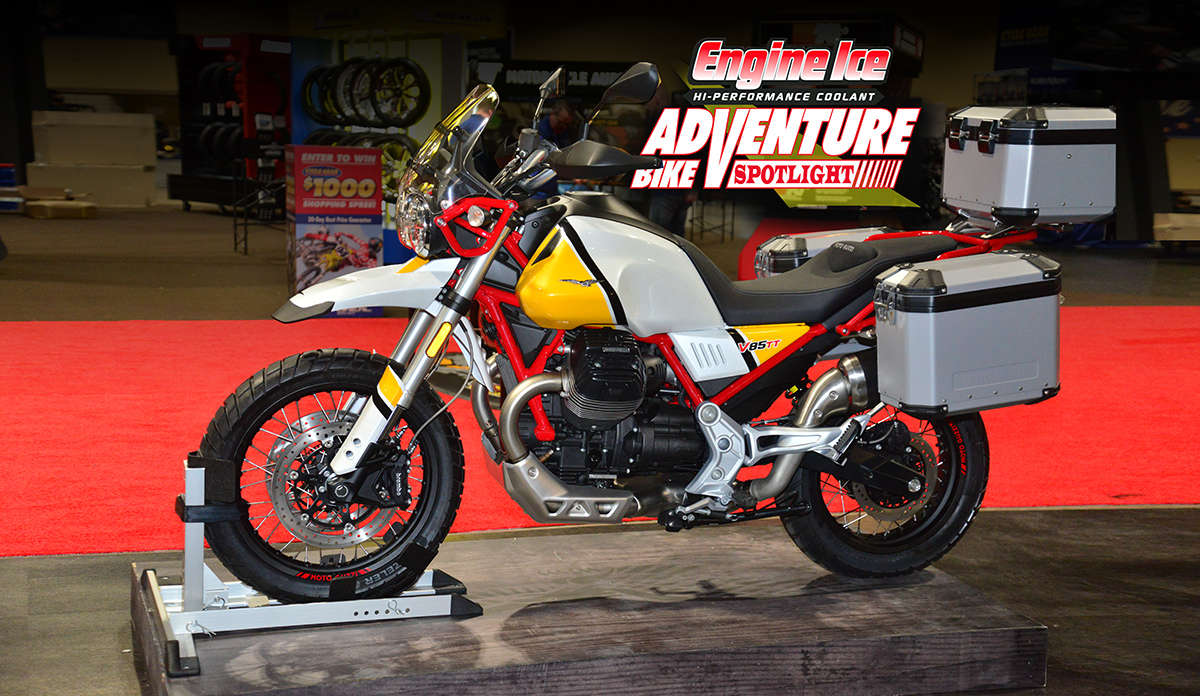 The Progressive International Motorcycle Show in Long Beach this weekend presented the perfect opportunity to go adventure-bike spotting. All of the motocross bikes for 2019 have long since been announced, but this is right in the middle of street-bike introduction season, and that means that companies that only dabble in the dirt are showing their stuff. Here are some of the more interesting ADV bikes from Long Beach. 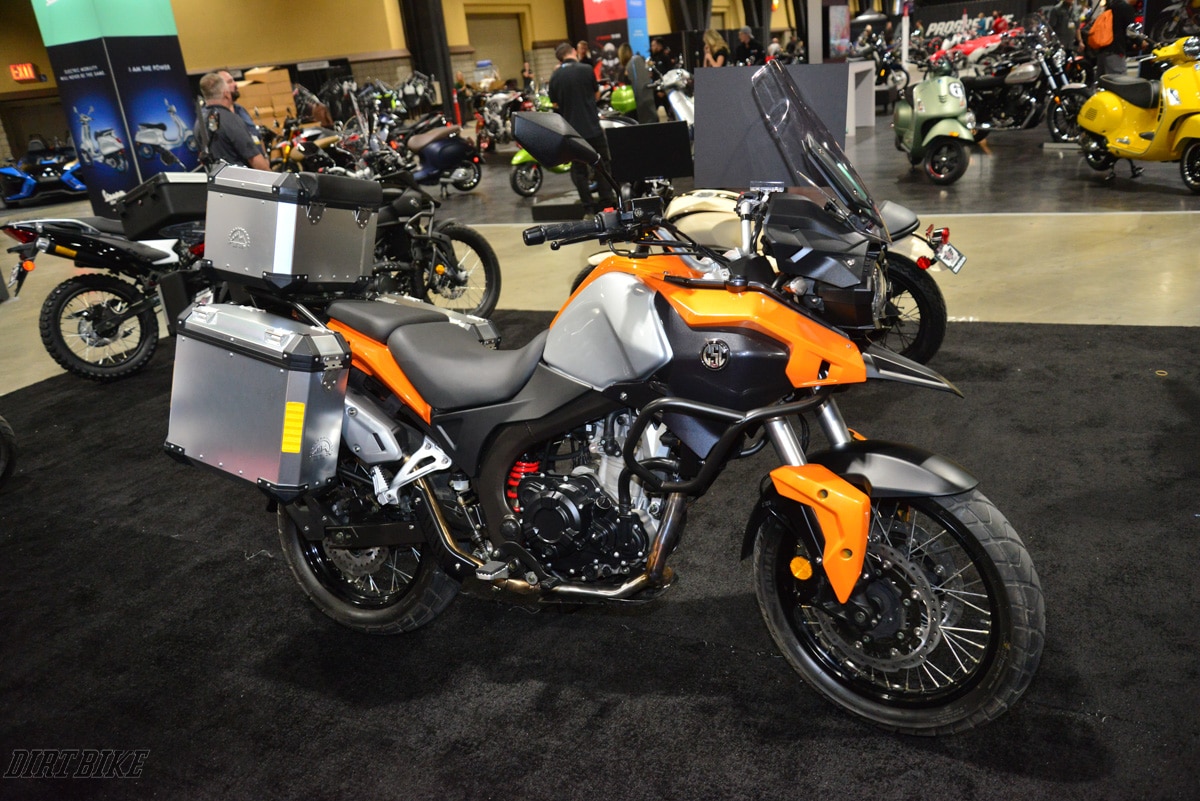 This is a brand-new entry-level ADV bike from an upstart company. CSC has already had some success with a 250cc dual-sport bike, and now there’s a new 450 in the line. The RX4 has a 450cc fuel-injected DOHC motor with a six-speed gearbox. The 5.3 gallon fuel tank gives it a range of around 300 miles. CSC also offeres removable aluminum panniers that are priced well and look awesome. The company sells its products on line and offers a two-year warranty. https://www.cscmotorcycles.com/ 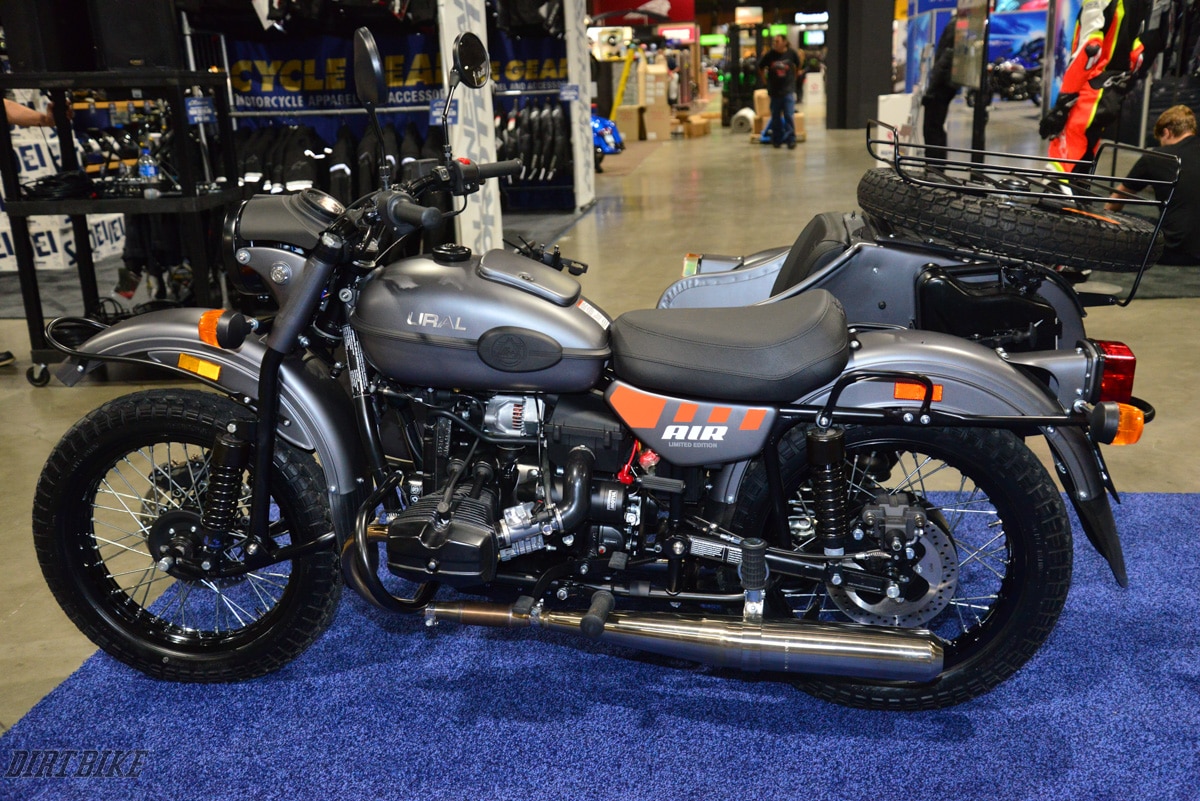 When Germany retreated from Russia in 1944, the motorcycles that were left behind so impressed the Soviet Army that they inspired a breed of Russian-made offspring. Ural motorcycles still adhere to that legacy today. The Gear Up is the most dirt oriented of the 750cc opposed-twin sidecar motorcycles. It has two-wheel drive, reverse and a spare tire. They now have Keihin fuel injection and produce 41 horsepower. There’s an optional three-year warranty. https://www.imz-ural.com/ 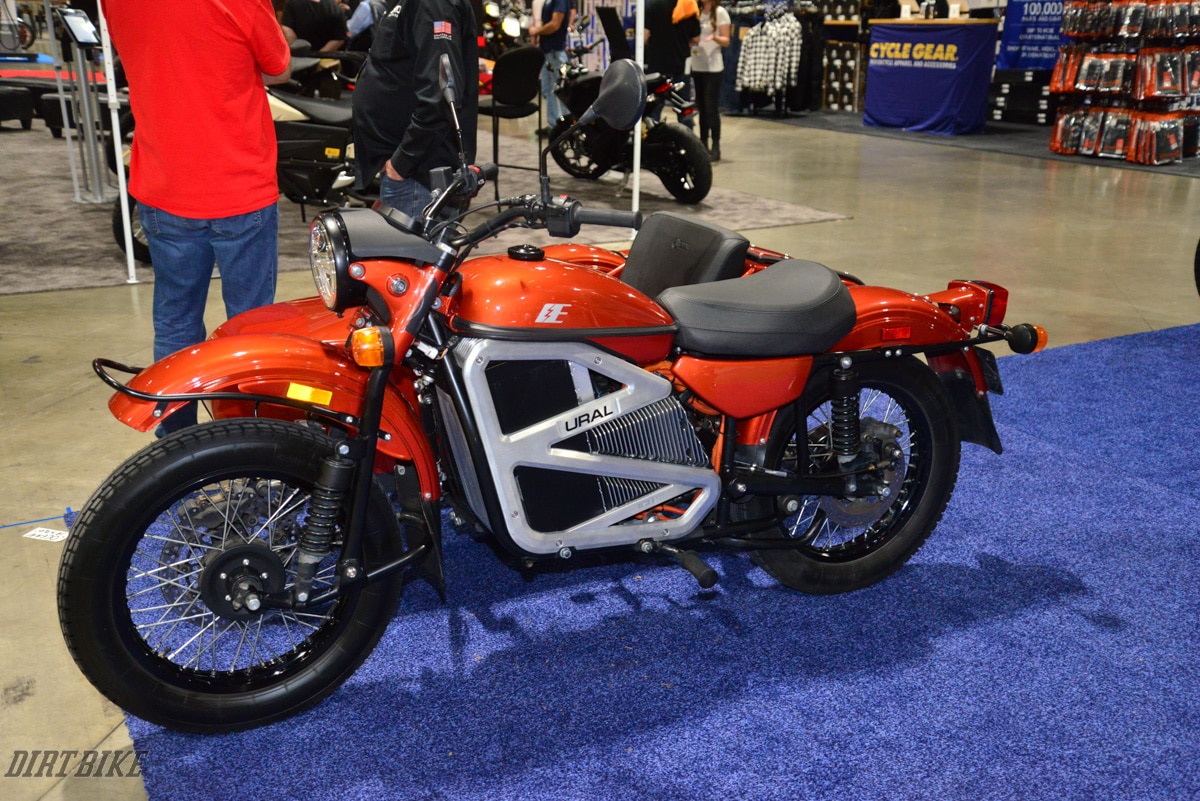 This is a concept bike that’s an interesting mix of futuristic technology and throwback styling. The electric Ural has a powertrain produced by Zero in the classic sidecar chassis. It’s said to have a range of 100 miles. No production dates have been announced.

MV Agusta is a company with true history. The factory is on the shores of Lago Varese, north of Milan, Italy, where WWII fighters were once produced. The Lusso is a high-end adventure bike with a 798cc three-cylinder motor. It’s said to produce 110 horsepower. The model shown here is the RCTV special edition, which sells for $25,998. https://www.mvagusta.com/en/

The classic Moto Guzzi Stelvio is no longer being offered, a victim of the Euro 4 emission standard. In its place is a mid-range ADV bike with a more practical price and size. The V85TT has an all-new 850cc fuel-injected motor. The design parameters of the new bike were to have a lower seat height and more manageability to attract newcomers into the adventure market. The Adventure model shown here will come with panniers and a travel trunk. It’s interesting to note that the Aprilia Caponard, which was produced by the same parent company as the Guzzi, also was dropped this year due to emissions. No replacement has been announced. 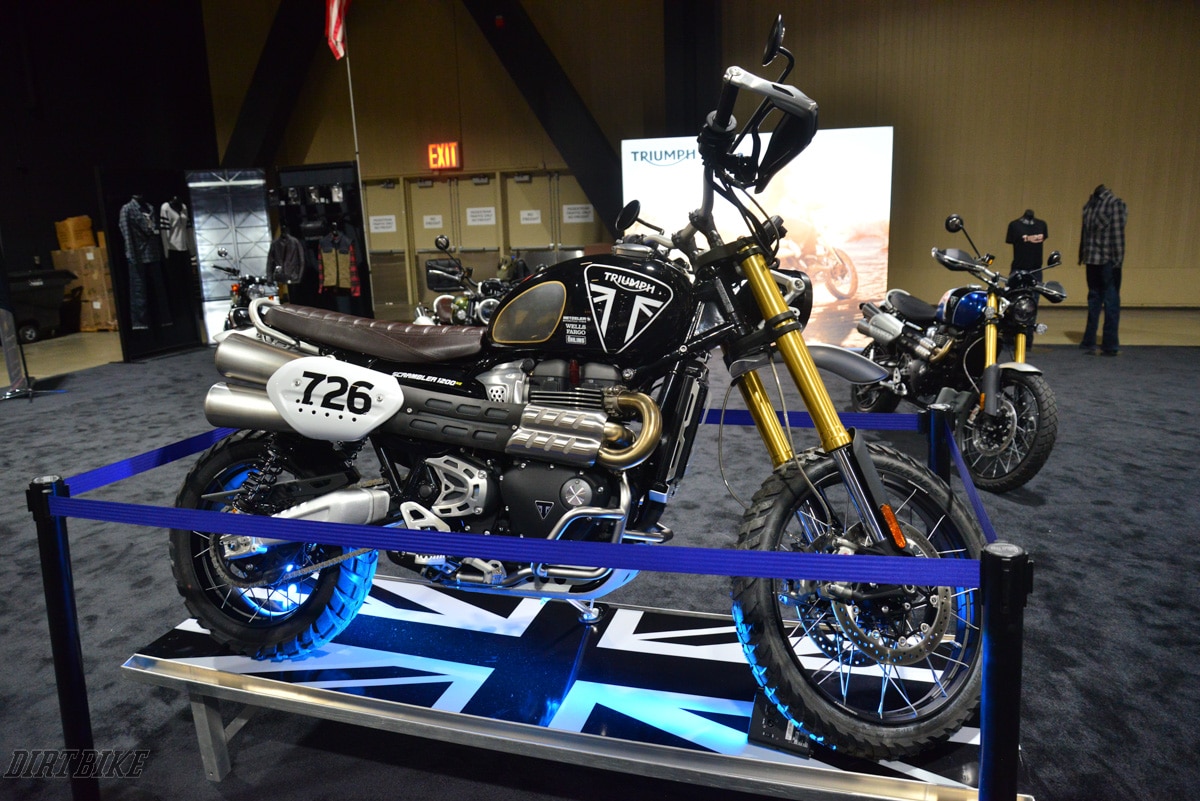 This bike was actually slated to compete in the Baja 1000 this weekend, but the team captain was injured at the last minute. Triumph has that much confidence in the new big Scrambler. The motor is a 1200cc Twin that produces 89 horsepower and 81 lb-ft of torque. Pricing will be announced at the end of the year. https://www.triumphmotorcycles.com/bikes/classic/bonneville-scrambler-1200 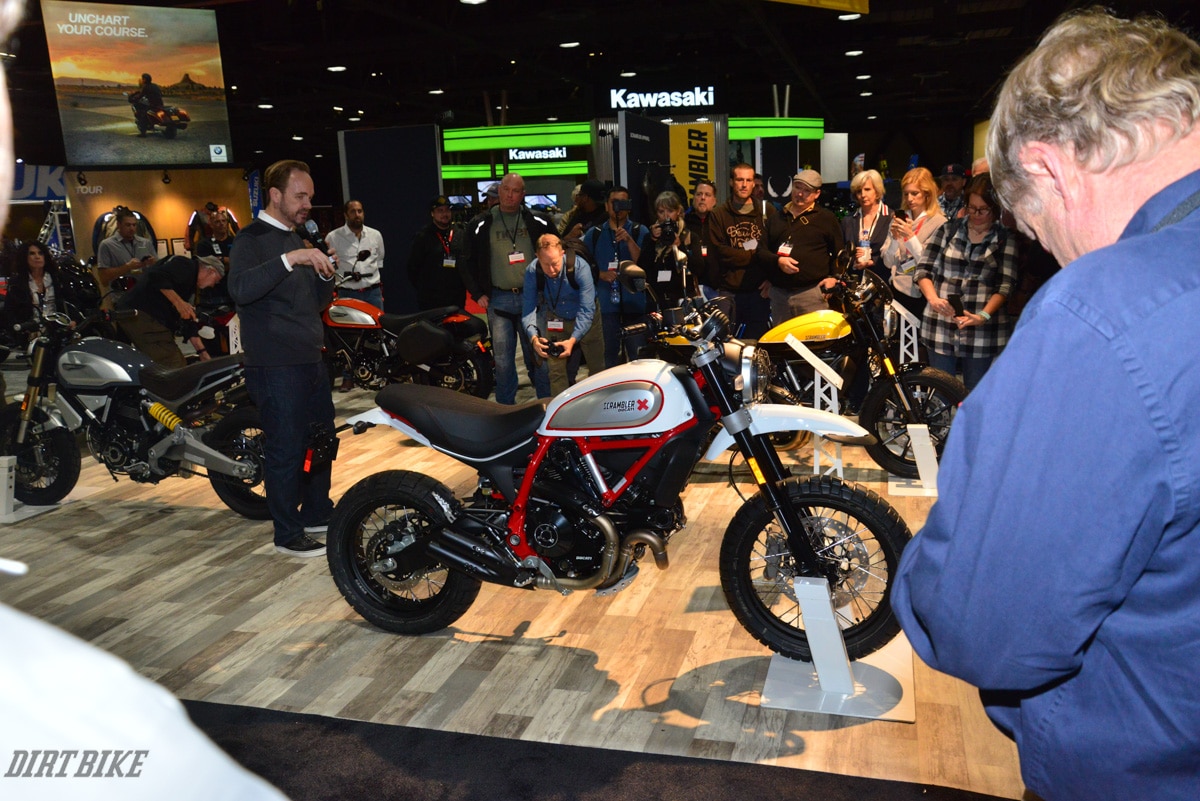 The Scrambler line continues to evolve over at Ducati with a long list of changes to make the bike more legit in the dirt. The bike now has a racing pedigree with wins in such diverse events as flat track Super Hooligan racing and the Elsinore GP. There are four different Scrambler Ducatis with the 803cc L-Twin engine: the Icon, the Cafe Racer, the Desert Sled and the Full Throttle. There is also an 1100 series that includes three different versions. https://scramblerducati.com/

This is another retro bike, but the price is downright amazing. The Enfield factory has been in business since India was under English rule, and many of the classic designs can still be spotted on the company’s modern products. But the Himalayan has been extensively modernized with disc brakes and fuel injection without surrendering any of the classic appeal. The new motor is 411cc and is capable of 75 mpg.