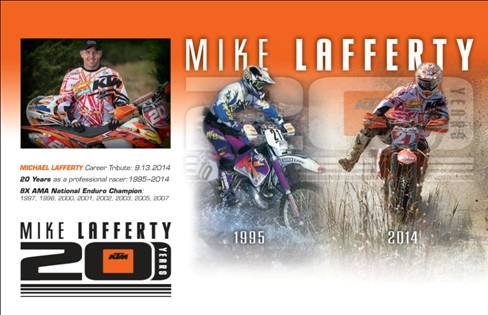 The 2014 KENDA AMA National Enduro Series year end awards ceremony will be held directly after the final round in Mathews Indiana on September 14th.

Join us in honoring the top three riders in each class from the 2014 series along with special awards.
This year’s awards ceremony will be hosted by former TV host Larry Maiers, be prepared to share some laughs. The awards dinner will be served as soon as the event awards have been handed out, and many of the pro riders will be on hand to help hand out the awards and congratulate the top 3 in each class. Ace photographer Shan Moore will provide a slide show during the ceremony of some of the thousands of photos that he has taken this year from each round.
CLICK HERE to purchase tickets on-line for $12 each or purchase them at the Little Brown Jug event on August 31st. 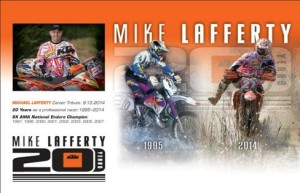 8x National Enduro Champion Mike Lafferty is in his 20thand final season as a professional motorcycle racer, with over 70 national wins since 1997 the
numbers speak for themselves. We would like to invite you to join us in a celebration of his career at his last race as a factory KTM rider at the Muddobbers National Enduro in Matthews Indiana on September 14th.

The NEPG will be hosting a tribute dinner Saturday September 13th from 5-7pm at the Matthews Covered Bridge. The tribute dinner will be hosted by the legendary Larry Maiers. We will have Mike’s 1997 championship bike along with his 2014 race bike on display. Also a highlight video of Mike’s career and a host of guest speakers like Dick Burleson, Jon Eric Burleson, Randy Hawkins, Robbie Jenks and Matt Stavish just to name a few.

If you would like to take part in the tribute dinner you can purchase a ticket for $17 by CLICKING HERE and you will also receive an autograph card like is shown above. You can also purchase a ticket & autograph card at the NEPG registration trailer at the Little Brown Jug on August 31st.  There will be very limited tickets available the day of the tribute dinner so please get your tickets early.