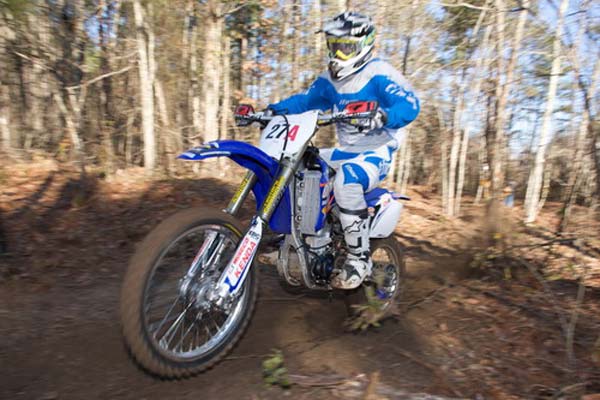 Share FacebookTwitterGoogle+ReddItWhatsAppPinterestEmail
Charlie Mullins heated up the course, leaving the rest of the competition in the cold as he put his Obermeyer/AmPro Yamaha on top of the box at the opening round of the Rekluse/AMA National Enduro Series in Sumter, South Carolina, today.
With temperatures dipping down into the teens on Sunday morning, most of the 492 competitors had a tough time getting into the flow of things, but Mullins was able to shake off the frost and beat out fellow GNCC-regular Cory Buttrick by nearly two minutes over the six-section, 82-mile course.
Defending series champ Russell Bobbitt held the lead at the end of the first section, covering the distance 18 seconds faster than Mullins, while Husaberg’s Michael Lafferty and KTM’s Cory Buttrick followed a few seconds back.
Mullins was quickest in the second section, with Lafferty 15 seconds back and Buttrick another second behind Lafferty. Bobbitt had problems with slower riders in a mud bog and finished the section 30 seconds off the pace.
Lafferty took the sandy and whooped out third test, edging Mullins by two seconds, while Bobbitt was quickest in section four.

Buttrick turned up the heat in the final section, claiming the fastest time over Mullins by nine seconds, which was good enough to claim third but not to catch Mullins.

Mullins was happy to get the win, along with the check that went along with it.

“I’m basically just riding for contingency money this year so you could say I am racing to get paid,” said Mullins. “This is a good way to start off the series and I feel good about the year. I made a few mistakes in the first two section, but the last four I just put my head down and rode mistake-free.”
Buttrick was equally happy.
“I was basically trying to get a good rhythm all day and the only problem was I got stuck in a rut and had to get off the bike,” said Buttrick. “I was flowing a lot better with the bike at the end of the day and I really had fun.”

Bobbitt put his factory KTM on the final step of the podium, edging Lafferty by 26 seconds. Meanwhile, Husaberg’s Nick Fahringer and Husqvarna’s Glenn Kearney rounded out the top six.