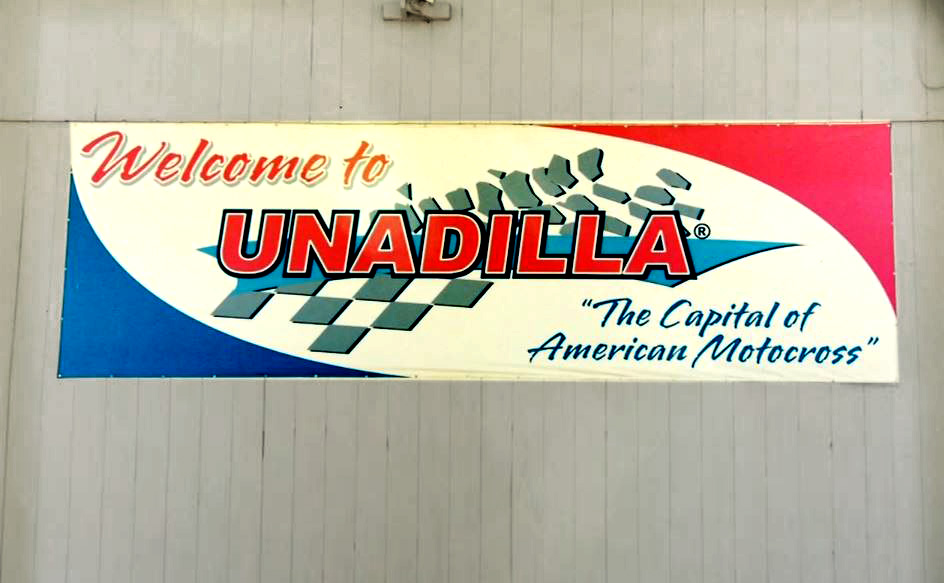 Unadilla, New York played host to a muddy round 10 of the Lucas Oil Pro Motocross series. In wet or dry conditions, Eli Tomac and Marvin Musquin are the two fastest riders in America right now, and they proved it again by trading wins. Conditions were horrifying with vision becoming the most important factor in both motos. Those conditions played right into GNCC Champion Kailub Russell’s favor, as he found himself in fourth at one point in his first-ever pro motocross. He eventually finished sixth that moto. Unfortunately, he would tangle with Justin Barcia after a great second moto start, and was eventually forced to take a DNF. In the 250 class, Frenchman Dylan Ferrandis swept both motos ahead of Aaron Plessinger (another rider with GNCC roots). Plessinger’s points lead was further extended, as Alex Martin had a rough day. The 250 championship can be wrapped up in the first moto next week at Budds Creek.

By the time the first moto started, the track was a muddy mess, so you just knew things would get a little crazy. It started with privateer Dylan Merriam grabbing the holeshot and then actually holding off Marvin Musquin and Blake Baggett for a bit before giving up the lead.

After two laps, it was Musquin, Phil Nicoletti and Baggett running in the top three with Tomac behind them in fourth. Tomac had overcome a poor start by making a number of passes. Soon though, he was hindered by a malfunction with the roll-offs on his goggles. With about 20 minutes still left in the moto, the points leader was forced to pull into the pits and get a new set of goggles. During that time he lost a position to Benny Bloss but was able to get it back quickly. Tomac then moved up to third place after Baggett was forced to make a pit stop of his own for new goggles.

Tomac’s unlikely charge continued in the second half of the race. After passing Nicoletti for second, Tomac started closing in on Musquin while Musquin began having goggle problems of his own. As Musquin slowed down to make a pit stop, Tomac passed him to move into the lead. Musquin re-entered the track in second place but was about 10 seconds behind Tomac at that point.

Meanwhile the cross-country experience of Kailub Russell was paying off. The five-time GNCC champ making his Red Bull KTM debut weathered the storm and continued picking up spots. He eventually moved past Nicoletti and Benny Bloss into third place before subsequently giving those spots back to the aforementioned riders.

Tomac went on to win the race in dominating fashion. Not only did he finish 25 seconds ahead of Musquin (and more than a minute up on everyone else), he also lapped the field all the way up through eighth place.

Behind Tomac and Musquin, it was Nicoletti, Bloss and Baggett rounding out the top five. Russell ended up in sixth.

With Tomac and Musquin fighting for the 450 Class championship, a subplot has emerged with Ken Roczen and Justin Barcia in a battle for third place. (The two riders entered the day tied in points.) Roczen had multiple falls during this race, plus a pit stop of his own, and finished seventh. But he still finished ahead of Barcia, who ended up eighth after a first-turn crash on the opening lap.

Cooper Webb was running inside the top 10 for most of the race, but he went down with two laps to go and took a rock to the eye. He finished 16th as a result.

After his strong start, Merriam ended the race in 15th.

With the rain stopped, the riders were presented with different track conditions than they dealt with in Moto 1. When the gate dropped, Marvin Musquin and Eli Tomac were side-by-side through the first turn. Musquin emerged with the holeshot but it was Nicoletti was came through and snatched the lead away. Justin Barcia and Kailub Russell were close behind them until Barcia made a mistake that ended up taking both riders down. Also crashing on the opening lap was Benny Bloss, who had finished fourth in the earlier moto.

Nicoletti led the first two laps of the race and actually had a decent lead, but an error allowed Musquin to find a inside line that took him past Nicoletti and into the lead. Tomac soon passed Nicoletti for second place, setting up the latest installment of Tomac vs. Musquin. This time, though, it was Musquin dropping the hammer. By the start of Lap 8 (about 10 minutes to go in the moto), Musquin’s lead was up to 18 seconds.

Meanwhile a good battle developed for third place. Nicoletti, who had been holding down the position for a while, lost spots to Yamaha teammates Cooper Webb and Justin Barcia, two riders who both had their struggles in Moto 1. Then things got a bit heated as Barcia tried to push Webb for third place. As Barcia moved around Webb in a turn, Webb attempted to block his line. Both riders stayed upright despite a bit of contact, but Barcia gestured to Webb shortly after and didn’t seem too thrilled. Webb nearly passed Barcia back, but Barcia was able to hold him off and open up a gap. With two laps to go, Barcia went down again but quickly remounted before Webb could catch back up to him.

Musquin, Tomac, Barcia, Nicoletti and Webb ended Moto 2 as the top five riders. The win allowed Musquin (2-1) to edge out Tomac (1-2) for the overall victory thanks to the tiebreaker (better Moto 2 result). It’s Musquin’s fifth moto win and third overall win of the season.

Despite his victory, the point standings remain unchanged because Musquin and Tomac’s results cancelled each other out. It will still be a 15-point lead for Tomac with just two rounds left to go.

Nicoletti (3-5) earned third overall. It’s the first overall podium finish of his career and it comes in his home state of New York.

Webb’s fourth-place moto finish was his best result of the season since returning from injury at Round 6.

As for Russell, the five-time GNCC champ who finished sixth in Moto 1, he was unable to finish the Moto 2 after crashing again — this time by himself — midway through the race.

Japanese rider Toshiki Tomita (10-9) earned the first top-10 overall finish of his career thanks to a pair of strong motos.

After a full-on mudder in the first 450 Class moto, the rain died out in time for 250 Moto 1, but it was still a muddy track. Michael Mosiman, coming off solid results at the last two rounds, emerged with the holeshot and soon opened up a 10-second lead on Dylan Ferrandis, Mitchell Harrison and the rest of the field. Joey Savatgy was running near the front as well but went down hard and fell outside the top 10. Also crashing early in the race was Savatgy’s teammate, Austin Forkner, who has ended up on the ground a lot in recent weeks. That crash took Forkner outside the top 30.

Mosiman’s lead started to diminish over the next several laps. On Lap 5, Ferrandis had the lead cut down to under two seconds but before he could make a challenge, Mosiman crashed by himself on a jump. Ferrandis, Harrison and Aaron Plessinger all moved up a spot in the aftermath of the crash, and Mosiman fell back to fourth. Plessinger then passed Harrison to jump into second place behind Ferrandis.

The second half of the race started off as a battle of the Star Yamahas. Ferrandis had the lead but then his bike began smoking, which resulted in his team telling him to back off the clutch. He caught a break when Plessinger, who had been just a few seconds back, had a bad lap and lost a ton of time. That allowed Ferrandis to stretch it out to a 25-second lead, and even though he went off-track and into a fence at one point, he still maintained a huge lead over his teammate for the rest of the race.

With Ferrandis way out front, the only drama was whether anything would happen to his bike before the checkered flag. Fortunately for the Frenchman, it held up to give him his third moto win of the season. Ferrandis is now the only rider aside from Plessinger to win more than two motos in the 250 Class this season.

Plessinger finished second, allowing him to add to his championship lead over Alex Martin, who finished 10th. Rounding out the podium was Shane McElrath, who inherited third place late in the race thanks to a crash from Harrison. Harrison and Sexton rounded out the top five, and Mosiman matched his career-best result with a sixth-place finish.

Forkner was unable to score any points in the moto following his early crash. He finished 23rd, giving him one bad moto result for the fifth consecutive round. The good news for Forkner is that while one moto has been bad each week, he’s balanced it out with a top-two finish in the other moto each time.

Several riders, including Michael Mosiman, went down in the first turn while Cameron McAdoo took the holeshot ahead of Dylan Ferrandis and the rest of the field. As riders shuffled around, it ended up being McAdoo, Jordon Smith, Mitchell Harrison and Ferrandis in the top four spots. Under intense pressure from Harrison, Smith went down early and dropped out of contention.

McAdoo ended up leading the first four laps of the race before ultimately losing spots to Harrison, Ferrandis, Aaron Plessinger and Joey Savatgy. It was then Harrison’s turn to enjoy the lead for five laps until he came under fire from the Star Yamaha duo of Ferrandis and Plessinger. The three riders were bunched so tightly together that at one point, Ferrandis went from looking like he would take over the lead to falling back to third in the blink of an eye. The lead eventually changed hands when Harrison made contact with a lapped rider with under four minutes to go and fell. That enabled Plessinger to move into first and Ferrandis into second, but the battle for the lead was far from over. WIth just over two minutes left on the clock, Plessinger went wide while Ferrandis went inside, and Ferrandis emerged from the turn as the race’s fourth different leader.

Plessinger nearly caught a small break on the final lap when Ferrandis got held up by a lapped rider, but it proved inconsequential. Even with his number plate hanging off the front of his bike for much of the race, Ferrandis was able to ride to his second moto win of the day. His 1-1 sweep gave him the overall win for the second time this season, and Plessinger finished behind him with 2-2 results.

Savatgy scored a third-place finish in the moto, but the final spot on the overall podium went to Harrison (4-4). It’s the first overall podium of Harrison’s 250MX career.

Plessinger’s solid day was augmented by the struggles of his main championship rival Alex Martin (10-7, 7th overall). With two rounds to go, Plessinger now holds a 78-point lead over Martin, a deficit that will be nearly impossible to overcome as long as Plessinger stays healthy. That puts him in good shape to clinch the title next weekend at Budds Creek. Plessinger just needs to leave that round with a lead of at least 50 points.

Ferrandis’s big day vaulted him all the way from 10th to fifth in points — an impressive ranking considering he missed the first three rounds of the season due to injury. He now ranks second behind Plessinger in 250 Class moto wins (4) and overall wins (2) this season.