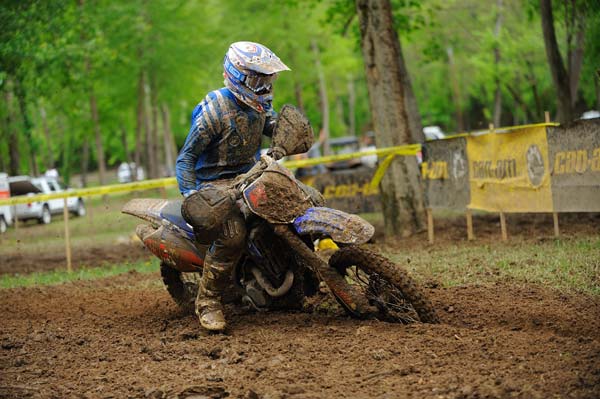 Hurricane Mills, TN (April 25, 2010) – Charlie Mullins has been showing great speed all year. However, the Obermeyer/Am Pro/FMF Yamaha rider has had trouble putting a complete race together in GNCC competition. At round five of the 2010 Can-Am Grand National Cross Country Series in Hurricane Mills, Tennessee, Mullins did just that – he put it all together, claiming his first victory of the year and ending Josh Strang’s win streak at four.

The race could have very easily ended in a fifth win for Strang, the FMF/Makita Suzuki rider led just as much of the race as Mullins. In fact, the two riders pretty much ran nose to tail for the last half of the race in one of the most exciting finishes of the year. But it was Mullins who held the upper hand at the finish; taking advantage of a line he spotted on the previous lap to pass Strang for the lead.

“Josh was leading going into the final lap, and on the lap before we went into this creek bottom and at one point we took this line up high on the bank. But I saw another line that went straight through, and I decided if I was in position I would take the other line on the last lap and try to pass him there,” said Mullins. “When we got back to that spot, he went high and I took the straight line and came out ahead of him.”

Strang pushed Mullins for the final few miles, and things got even more exciting when Mullins bobbled within sight of the finish, however, the North Carolinian was able to hold on to the lead and got to the finish five seconds before Strang.

“We had a good race and I just didn’t give up,” added Mullins. “In the first few races I just made too may mistakes. And at this race I just calmed down and rode mistake-free and that was the difference.”

Despite finishing second, Strang still holds a 37-point lead in the series standings over Mullins.

“I think Charlie rode a great race,” said Strang. “There were parts of the track where I was faster and parts were Charlie was faster, but I think overall I did the best I could. The goal is to be number one at the end of the year, so to get a second place – I can’t be bummed about that. We walked away with good championship points.”

Mullins was third at the start of the race behind FMF/KTM’s Cory Buttrick and Am Pro/FMF Yamaha’s Paul Whibley, who earned the $250 Motorcycle-USA.com Holeshot Award for getting to the first turn stripe before anyone else. FMF/KTM’s Nate Kanney was also in the mix, along with Clockwork/RidePG KTM’s Chris Bach and Husqvarna’s Glenn Kearney.

Whibley dropped off the pace after he damaged his clutch lever, but Kanney and Bach pushed Mullins and Strang for the first half of the race, and then dropped back into their own private battle over third, which Kanney ended up winning.

“Chris and I had a good race out there,” said Kanney. “It would have been nice to have stayed up there with Charlie and Josh, but I stalled the bike trying to get around a lapper and once they put a few lappers between us they were able to pull away.”

Bach ended the day with a fourth, his best ride since turning in a couple of podium finishes at the first two rounds of the series.

FMF/KTM’s Cory Buttrick came out on top of a race-long battle with Kearney to take fifth, with Kearney settling for sixth, ahead of Jimmy Jarrett, on the GEICO/JG Off Road/ Monster Energy Kawasaki. Whibley managed to salvage an eighth, while Kawasaki riders Eric Bailey and Jedediah Haines rounded out the top 10.

In the XC2 division, Monster Energy Andrews Cycles’ Jason Thomas claimed the $100 Motorcycle-USA.com Holeshot Award to start the race, but in the end it was FMF/KTM’s Kailub Russell who grabbed the win – his fourth of the season.

Early on, Russell trailed Thomas and GEICO/JG Off Road/ Monster Energy Kawasaki’s Scotty Watkins. However, Russell got stronger as the race wore on and he eventually took the win by almost two minutes over Watkins.

“I got into third behind Scotty and Thomas and they were pushing pretty hard, but I never could get into the lead,” said Russell. “On the third or fourth lap I was finally able to take the lead but I had trouble shaking those guys until the end of the race. It ended up being a pretty good race.”

KTM rider Jesse Robinson finished third, despite having to go to the pits to clean the mud out of his eyes and ears.

“On the third lap I hit this rock and it dumped me in a big mud hole and I was covered,” said Robinson. “I had to come in the pits and wash off and change goggles. It got in my ears and threw my balance off and I just had to come in and clean it out. It was just one of those days where I tried to go fast and I made some mistakes.”

Kawasaki rider Jordan Ashburn turned in a strong ride, which netted him the win in the Open A division. It was also good for his third Overall Amateur Award of the year.

Tyler McDonald came out on top of a battle with Matthew Nix to win the morning race, his third such win of the year.

The Can-Am Grand National Cross Series will return on May 8th and 9th for the Motorcycle-USA.com Yadkin Valley Stomp GNCC, held in Yadkinville, North Carolina.

About GNCC Racing:
The Can-Am Grand National Cross Country Series is America’s premier off-road racing series. Founded in 1979, the 13-round championship is produced exclusively by Racer Productions. Cross country racing is one of the most physically demanding sports in the world. The grueling three-hour GNCC races lead as many as 1,800 riders through tracks ranging in length from eight to 12 miles, competing for more than $3 million in prizes. With varied terrain, including hills, woods, mud, dirt, rocks and motocross sections, GNCC events are tests of both survival and speed. For more information, please visit www.gnccracing.com.

Wiseco Power for the Season!