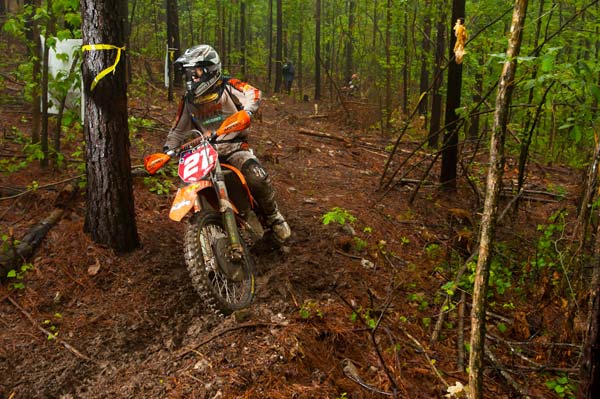 Bismarck, Arkansas, May 22, 2011 – Charlie Mullins blitzed the opening test of the day and then cruised to an impressive win at a rainy and muddy Train Robber National Enduro in Bismarck, Arkansas. The victory was the second of the year for the FMF/KTM rider and it elevated him into the lead in the Rekluse/AMA National Enduro Series standings at the midway point of the season. A hard rain on Saturday and then steady showers for most of the day on Sunday left the rocky Arkansas terrain slippery and unforgiving. However, Mullins was nearly perfect in the opening segment, finishing the seven-mile test 19 seconds faster than factory Husaberg’s Michael Lafferty. FMF/KTM’s Cory Buttrick was third-fastest, 16 seconds behind Lafferty, while Pennsylvania KTM rider Andrew DeLong rounded out the top four fastest times.Buttrick topped the second test, edging Mullins by a single second and moving in on Lafferty, who was seven seconds behind Buttrick. However, Mullins was back on top in the next test, finishing the nine-mile segment one second faster than Lafferty and Nick Fahringer, the two Husaberg riders finishing with identical times. Meanwhile, Buttrick stayed in the hunt another five seconds back. The final two tests were won by Fahringer, who came on strong at the end of the event but not enough to make up for a poor performance at the start. At the end of the day, Mullins completed the 76-mile course 30 seconds faster than Buttrick, who picked up the pace in the final test to move past Lafferty for second overall on the day. Lafferty completed the podium while Fahringer and Am Pro Yamaha’s Thad DuVall rounded out the top five. FMF/KTM’s Russell Bobbitt came into the event holding the series points lead, but rode the Arkansas race with a brace on his left arm after tearing a ligament in his wrist two weeks before. After the race, Bobbitt admitted that the wrist wasn’t quite ready for the slippery and rocky terrain however the three-time champ was able to salvage a few points with a seventh place finish, some 27 seconds behind New Zealander Rory Mead, who was sixth on Paul Whibley’s spare Yamaha. KTM riders DeLong, Shane Hufford Jr. and Brad Bakken rounded out the top 10.

The series resumes with round six in Upton, Wyoming on June 19th.  For more info see www.nationalenduro.com.