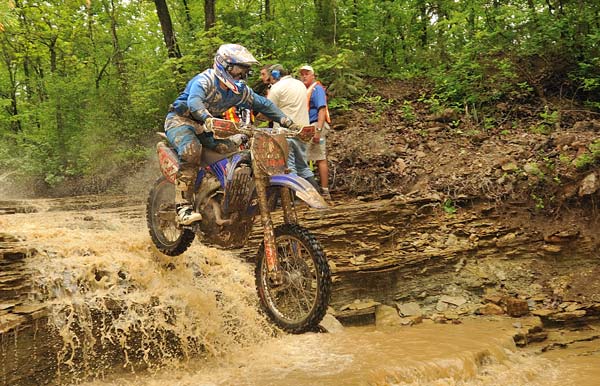 Cory Buttrick won the Indiana round and finished second in the series.

Cory Buttrick came on strong in the last two tests to claim an impressive win at the final round of the Rekluse/AMA National Enduro Series in Matthews, Indiana. But it was Obermeyer/Am Pro/FMF Yamaha’s Charlie Mullins who walked away with the biggest chunk of hardware. Needing only a top-six finish to clinch his first-ever national title, Mullins claimed the 2010 enduro championship with a comfortable second-place finish.

Mullins got off to a quick start on the rain-drenched and slippery Indiana farmland, winning the opening three tests of the 73-mile event. However, Buttrick stayed within striking distance on his FMF/KTM and picked up the pace in the final 20-mile stretch, winning the final two tests and taking the overall win by a one-minute margin over Mullins.

Charlie Mullins pretty much dominated the National Enduro Series winning 6 out of 10 events. You’d have to travel back to 2004 to find the last time any other machine other than a KTM won the series, and it was the guy running Charlie’s Team Am Pro- Randy Hawkins.

‘It was pretty tricky out there and it was hard to judge the terrain because some of it was slippery and some of it wouldn’t be,’ said Buttrick. ‘At the end of the race it got slicker and I was just trying to not let my tire slip and I just tried to be as smooth as I could and I think that was the secret.’

In all, Mullins won six events in the 10-round series, and made up a considerable deficit at the start of the year after he DNFed round two in Florida.

‘It was a hard-fought year and it came down to the last race but I was able to put in a good, solid ride and take the title,’ said Mullins. ‘It feels pretty good, especially coming back from as far as I did.’

Riding his first national enduro, Thad DuVall turned some heads by finishing third. The Am Pro/FMF Yamaha rider won the fourth test and ended the day over a minute ahead of factory Husqvarna rider Glenn Kearney, who matched his best finish of the year with a fourth.

Fourth went to eight-time champ Michael Lafferty on his Husaberg, while defending champ Russell Bobbitt was fifth on his FMF/KTM.