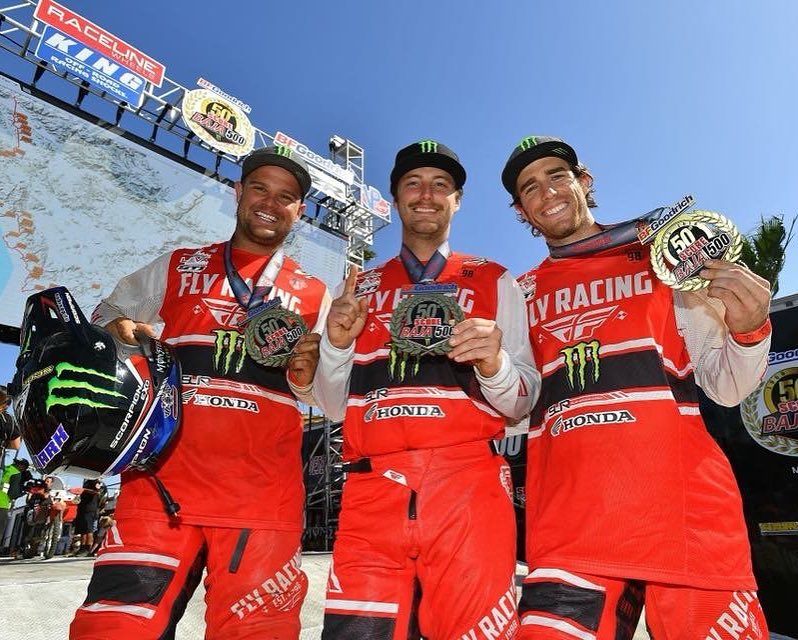 Team Slam Life Racing won the Baja 500 Pro Unlimited class this weekend after a nearly flawless ride. Justin Morgan was the rider of record and the driving force behind the team’s participation this year. His teammates Mark Samuels and Justin Jones on Slam Life Racing originally planned on skipping the first races in the SCORE series and concentrating only on the 1000, but Morgan did what it took to put together a serious effort for the whole season. The result is two back-to-back wins and a commanding lead in the points.

The race started at 3:30 a.m. and ran a record 542 miles in the northern part of the Baja peninsula. Slam Life Racing finished with a 35-minute lead after starting first and breaking ground the whole way. Shane Esposito, Max Eddy and Tyler Lynn on the 1x bike struggled in the early sections after starting fourth. They rallied in the middle of the day and worked up to second place. Garrett Poucher, Michael Valenzuela, Skyler Howes and Schuyler Schoonmaker finished 44 minutes later, ahead of a team anchored by Scott Meyers. The top Ironman finisher was Francisco Septien and the winner in the plus 30 class was a team with Ryan Liebelt, Greg Bardonnex, Andrew Puckett and Justin Schultz. For full results, go to Score-international.com.