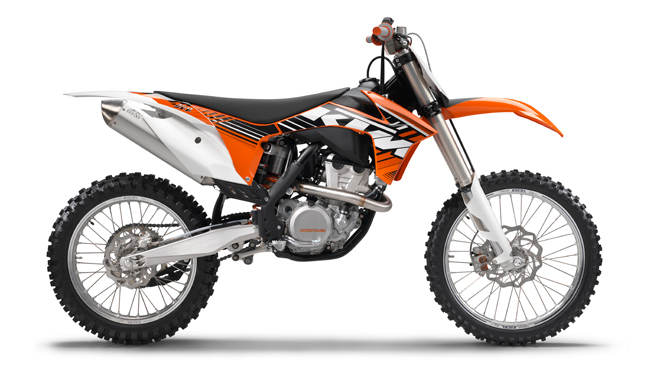 The 2012 KTM SX-F line receive some refinements and upgrades for 2012, including electric start on the 250SX-F. Now all the KTM four-stroke SX models have electric start. Changes across the SX-F line include new seals, new bushings and new setting for the 48mm WP closed cartridge forks. The SX models still run silver Excel rims with Dunlop MX51 tires on SX-F models and Pirelli Scorpion MX tires on the two-stroke SX bikes. The SX also received a white airbox and white number plates and the rear fender has been reinforced. The 250/350SX-F have new EFI mappings and an in-line serviceable fuel filter. There is also a new map select switch to easily change between different EFI maps.
The 450SX-F still has the Keihin FCR 41mm carburetor and received the new clutch with steel basket and the single diaphragm spring instead of the normal six coil springs. The new clutch has three adjustable pre-load setting and there is also a new clutch master cylinder, making clutch pull even easier.

The 450SX-F is back in 2012 with a Keihin FCR 41mm carburetor and an all-new clutch. It is still a five speed, has electric start and like all SX models, received new fork bushings, seals and new settings. The new clutch uses a steel basket with a single diaphragm spring instead of the old six coil springs and has three adjustable pre-load settings. The 450 now has a fork guard holeshot device.

The 350SX-F received the fork updates, new EFI mapping and white plastic on the rear fender and side panels. Both the 250/350SX-F use Keihin fuel injection with a 42mm throttle body. A new in-line serviceable fuel filter makes life easier and protects the fuel pump from harmful junk.

The 2012 KTM 250SX-F now uses and electric start and does not have a kick starter as a back up, but you can get one through KTM PowerParts if you think you really need one. The 250SX-F received new EMS mapping and the WP fork upgrades.