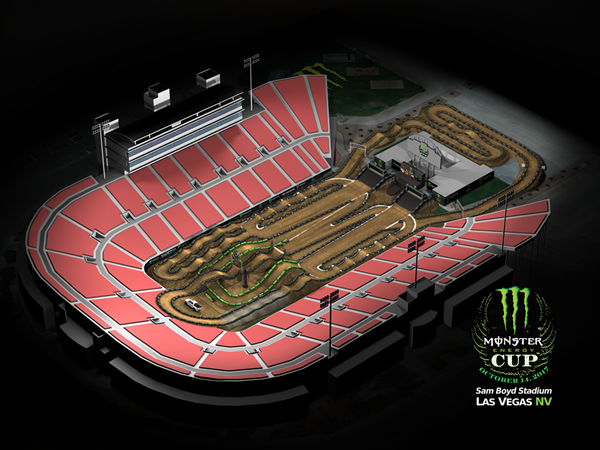 Feld Entertainment® announced today new changes for the Monster Energy Cup, the sport’s largest all-star exhibition Supercross race with 40,000 plus expected fans, to be held on October 14 at Sam Boyd Stadium in Las Vegas for the seventh straight year.

Las Vegas is an ideal location for the sport’s annual all-star event as the Entertainment Capital of the World hosts a prime setting for marquee talent to shine under the brightest lights, be it Mayweather vs. McGregor or Musquin vs. Tomac. While fans from around the world come to play their hand in a game of luck, the sport’s most premier racers will compete for the chance to win $1 million in front of a capacity crowd.

The custom-designed track at Monster Energy Cup is nothing like any in the world with a portion being built over the top of stadium seating, inspired by 5-time Monster Energy Supercross Champion and track designer for this specific event, Ricky Carmichael.

Unlike any other Supercross race, the unique format at Monster Energy Cup challenges riders with three, 10-Lap Main Events, and any racer who wins all three Main Events takes home $1 million, the largest purse in motorcycle racing.

This year’s Monster Energy Cup features a split starting gate with 44 feet of separation between the two ends, which will leave 11 racers on each side. Additionally, the starting gate will be elevated 12 feet in the air allowing for maximum speed heading into the first turn. Another unique change to this year’s track involves the Joker Lane, which racers must take once during each Main Event.

“The Joker Lane has always been a disadvantage to the athletes as it traditionally takes longer to complete,” said Carmichael, who has helped design every Monster Energy Cup track since its inception in 2011. “However, this year’s Joker Lane design has been modified to play into the racer’s advantage, creating a shortcut through the track to shorten the lap time.”

Promising talent have come close to winning the Monster Million, yet this feat has only occurred once in the history of the Monster Energy Cup, an internationally-anticipated event following one of the tightest Monster Energy Supercross seasons in recent history.

After four-time Monster Energy Supercross Champion Ryan Villopoto won the first Monster Million at the race’s inception, no elite athlete has been able to cash in, as the Joker Lane has come into play each and every year.

Past winners of the Monster Energy Cup dating back to its inception:

Call it coincidence or divine intervention but Supercross fans are calling it the curse of the Joker Lane. Year number seven could be the lucky race to break the curse.

Of the anticipated entries, including reigning Monster Energy Cup Champion, Eli Tomac, are a who’s who of Supercross’ elite from Marvin Musquin, Jason Anderson, Josh Grant, Cooper Webb and Dean Wilson, who will all compete in the one-night-only battle for the coveted Monster Energy Cup trophy.

Along with the pros, the Monster Energy Cup highlights an invite-only list of the fastest amateurs in the world with Amateur All-Stars and Supermini racers competing in two, 6-Lap Main Events as the sport’s only developmental platform for amateur athletes to shine on one of the sport’s biggest stages.

The day kicks off with a festival-like Monster Energy Cup Pit Party, a premier fan event from 12 to 6 p.m., where thousands will experience non-stop, family-friendly entertainment with the chance to meet the best racers and legends from around the world. A must-see at this year’s Pit Party is the Dirt Shark Biggest Whip contest, which will serve as an X Games Qualifier, plus a one-of-a-kind Monster Energy Head-to-Head Truck Racing exhibition. Confirmed drivers include 7-time Monster Energy Supercross Champion Jeremy McGrath, X Games Gold Medalist Brian Deegan, with daughter Hailie Deegan, the only female and youngest driver named to the nine-member NASCAR Next Class, Casey Currie, BJ Baldwin and others.

The Monster Energy Cup will be broadcast live on FS2 and via the FOX Sports GO app on Saturday, October 14 (9:30 p.m. ET / 6:30 p.m. PT). Then, on Sunday, October 15, FOX Broadcast Channel will air a 90-minute encore special following NFL games across the country (check local listings).

Additionally, international fans will have the opportunity to watch the Monster Energy Cup live by subscribing to the Supercross Video Pass, which will be available to fans outside of the U.S. and Canada via the mobile-responsive portal at supercrossLIVE.tv and via the Monster Energy Supercross Roku app.

BLAST FROM THE PAST: REX STATEN AT THE USGP