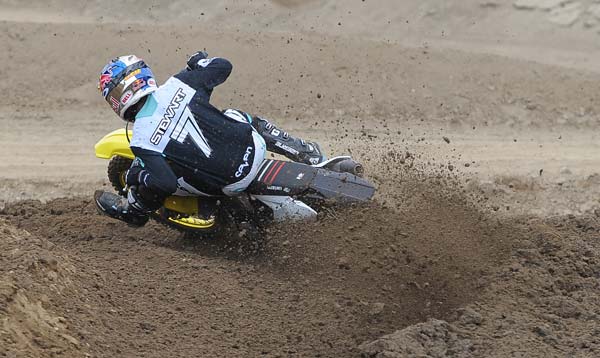 With the outdoor Nationals kicking off in less than two weeks many of the teams hit the So Cal circuit for testing. It’s Comp Edge on Tuesday, Milestone on Wednesday and Glen Helen on Thursday. Our own TWebb snapped some pics of some of the stars who really showed why they get the big bucks. Their cornering speed was crazy, their ability to scrub height and stay low on huge jumps was mind numbing. We talked to several team managers and they said their riders are excited about going outdoors and getting to ‘open it up’ a bit. Here’s a quick hit from Milestone.

James had a few issues with the Showa Triple Airs during the SX season and his Milestone testing involved numerous fork combinations.

The Yosh team spent the day testing several internal changes, before going back to an updated version of the Triple Air.

Josh Grant looked strong on the JGR YZ. Word on the street is he’s off to a new team next year.

Cooper Webb was flat hauling the mail at Milestone.

Troy Lee’s Cole Seely, second in the west and looking for good national showing before heading to the 450 class.

Malcolm Stewart showed no ill effects from the monster crash at Vegas.

The younger Stewart looks more at home on a 450.

A Villopoto-Stewart battle at Miley? Ah no, that’s a different number one who’s KX mounted.

Malcolm standing deep into the turn

Weimer on the brakes

7 dragging boot at the exit