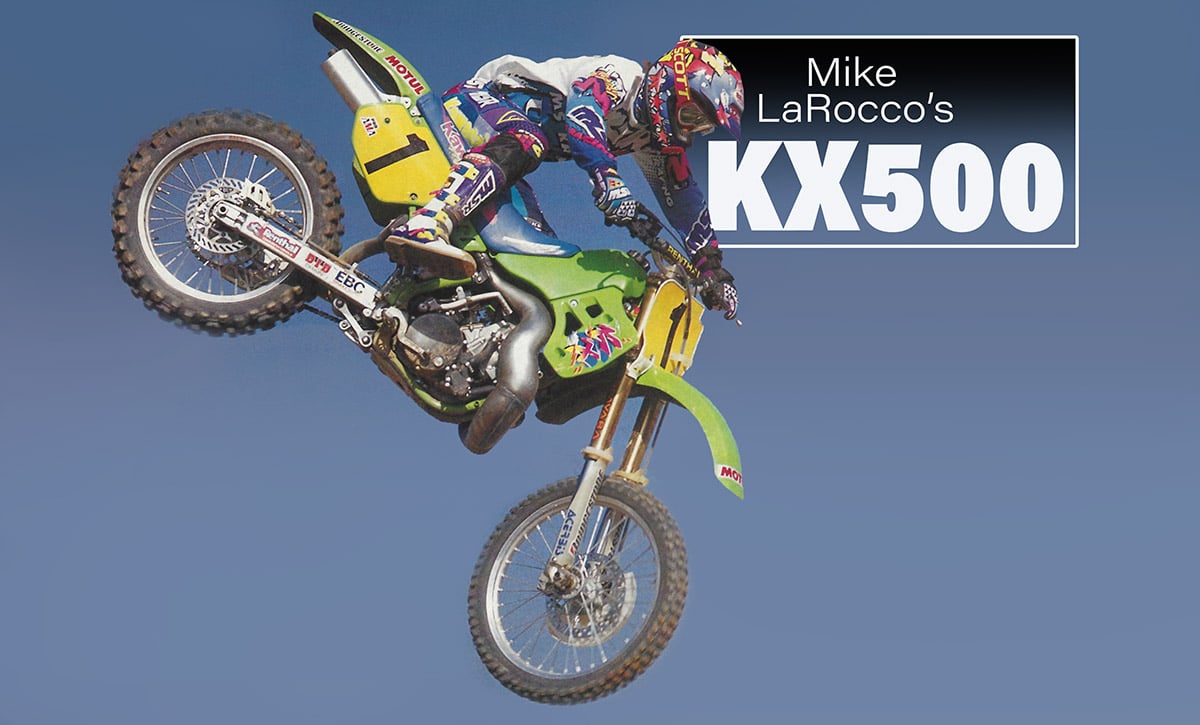 In 1993, Mike LaRocco became the last AMA 500cc Motocross championship. At the end of the year, the Editors of Dirt Bike got together with him and his bike for a feature in the March 1994 issue.

In motocross, the #1 plate is everything. Factories use $1000 bills like tear-offs to get it, and riders live on the edge and sometimes beyond to win it. After the championship monies are spent or invest­ed, the most tangible reward remains the #1 plate. Wearing the championship symbol throughout the year is the ultimate goal in motocross, and the big #1 is more visible than a Super Bowl ring or an Olympic gold medal. Some riders motivate themselves to keep the plate, while others find the number too heavy. A few are bumped into another class or move on to face new challenges, so they never get to show off the #1 plate. Far fewer face the end of a class as champion. In fact, it has only happened twice in American MX/SX history. Gary Semics never got to wear his ’74 500cc Supercross plate, because the class was dissolved for ’75. Mike LaRocco faced the same dilemma as the ’93 500cc motocross series champion. Mike did represent Team USA at the ’94 MX des Nations in Switzerlandwith a #1 plate, but otherwise did not wear his prize.

Kawasaki gave LaRocco his championship machine, but a garage is a poor place to display The Plate. So, let’s salute LaRocco and his KX500 with an up-close and personal look at the bike- and talk with Mike on what it takes to ride it to its full potential.

A little Wardy, a lot LaRocco

Mike LaRocco’s championship ’93 KX500 isn’ t much different than Mike Kiedrowski’s ’92 title bike or Jeff Ward’s ’89 and ’90 machines. The production bike didn’t change that much over five years, and Kawasaki knows how to turn the showroom models into National-caliber weaponry. Mike’s bike, like the machines of his predecessors, came out of a crate that just as easily could have gone to a dealer.

Mike’s KX500 was uncrated and stripped to the bone. The frame was stripped, then the footpeg stays were re-welded, and mounts for the glide plate were attached before the frame was repainted. The motor also received works attention, getting fully disassembled, polished, balanced and rebuilt to optimum tolerances. A factory cylinder and head replaced the stock parts upon reassembly, and the clutch cover was replaced with a magnesium KMC piece with titanium screws. The pipe was replaced with a hand-made works unit, but the silencer, reeds, ignition, carb and airbox were all left stock.

Works suspension was what made La­Rocco’s SR500 different from the KXs campaigned by privateers, as the motor and chassis mods could be duplicated by aftermarket performance companies. Works Kayaba shock and fork replaced the standard Kawasaki KYB units, and the fork rode on works magnesium triple clamps. All front-end fasteners are Ti, and the works shock featured Ti linkage bolts and 133mm billet dogbones. Both axles were oversized for added strength and rigidity. Spring rates and valving were closely guarded secrets, with beaucoup testing going into getting optimum acceleration and braking out of the big KX.

Kawasaki went to oversized brake discs and brake pads from Kawasaki Heavy Industries (front) and EBC (Kevlar, rear), with Motul brake fluid. Both the front and rear calipers used magnesium carriers, and a Brake Snake prevented the rear lever from getting bent and causing a DNF. Likewise, the front brake line and handlebar perch were safety-wired for reliability, and the radiators were three-core units that were welded to prevent a dreaded DNF. Special pieces spaced the radiator shrouds outward for more cooling air.

Most other modifications were aimed at reliability and dialing the personal details for LaRocco’s riding style. You would think that some mods or settings would come from the team’s efforts with 250s, but the opposite is true. SR500s haven ‘t changed (if there were a ’94 KX500 race bike, it would be identical to MLR’s ’93, since the only parts changed in production would be replaced by works parts), but the 250s have changed every year. LaRocco pointed out that Team Kawasaki used the 500 settings as a baseline for the new 250s.

In other words, if it ain’t broke, don’ t fix it

HOW THE CHAMP BECAME A CHAMP

The Rock’s advice for riding 500s

How did LaRocco become the ’93 500cc champion? By winning races, of course, and by nearly winning them (not throwing it away trying to win them). Of the four races in the series, LaRocco won two (Washougal and Binghamton) and took second in the others (Millville and Steel City). Mike remembered how a broken shifter cost him the ’92 125cc National title and wasn’t about to let the same thing happen. Here are LaRocco’s thoughts on riding 500s, a feat he adapted to quickly and seemingly effortlessly.

Recalling his first rides on the KX500, LaRocco smiles: “When we first tested on 500s, I was off of the pace, but I adapted quickly and was soon able to hang with Kiedrowski. The most important part of riding a 500 is throttle control. That first time, I was out of control and overshooting corners on the stock bike. We worked on the brakes a lot and soon had the bike stopping as fast as it accelerates.

“It didn’t take long to adapt to the added boost and weight of the 500, and riding 500s helped me with 250s, too. I ride in the powerband and like to roll it on off of the gate and out of comers, as opposed to clutching the 250 like a 125. The 500 really sticks in corners, so you can really make up a lot of ground just by rolling on the throttle and taking wide, smooth lines. By coming in hot and wide, then cutting inside and rolling it on, I can save 20 feet in every comer. That really helped with riding 250s, especially in sweepers, because 500s make you use smooth, fast lines.

“You have to hang on a lot harder on 500s because of the extra power, but I’ve never had a problem with arm-pump in a race. The key is to hang on with your legs as well as your arms, but the biggest factors are throttle control and being smooth.

“I always start in second gear. It’s such a long gear that you don’t need to take a chance starting in third. You can control the launch easily, and it’ s easy to grab third–no problem.

“Jumping a 500 is bitchin’. I was pretty scared at first but got used to the weight and power quickly. I have this 150-foot tabletop at home, one that I can’t clear on my 250, even tapped out. It’s no problem on my 500! We timed it, and there’s four seconds of hang time. The extra weight of the 500 takes getting used to, and you can’t whip it like a 250, but I really like jumps on my 500. It’s just more precise. I can time the take-offs and landings better than on 250s, too.” 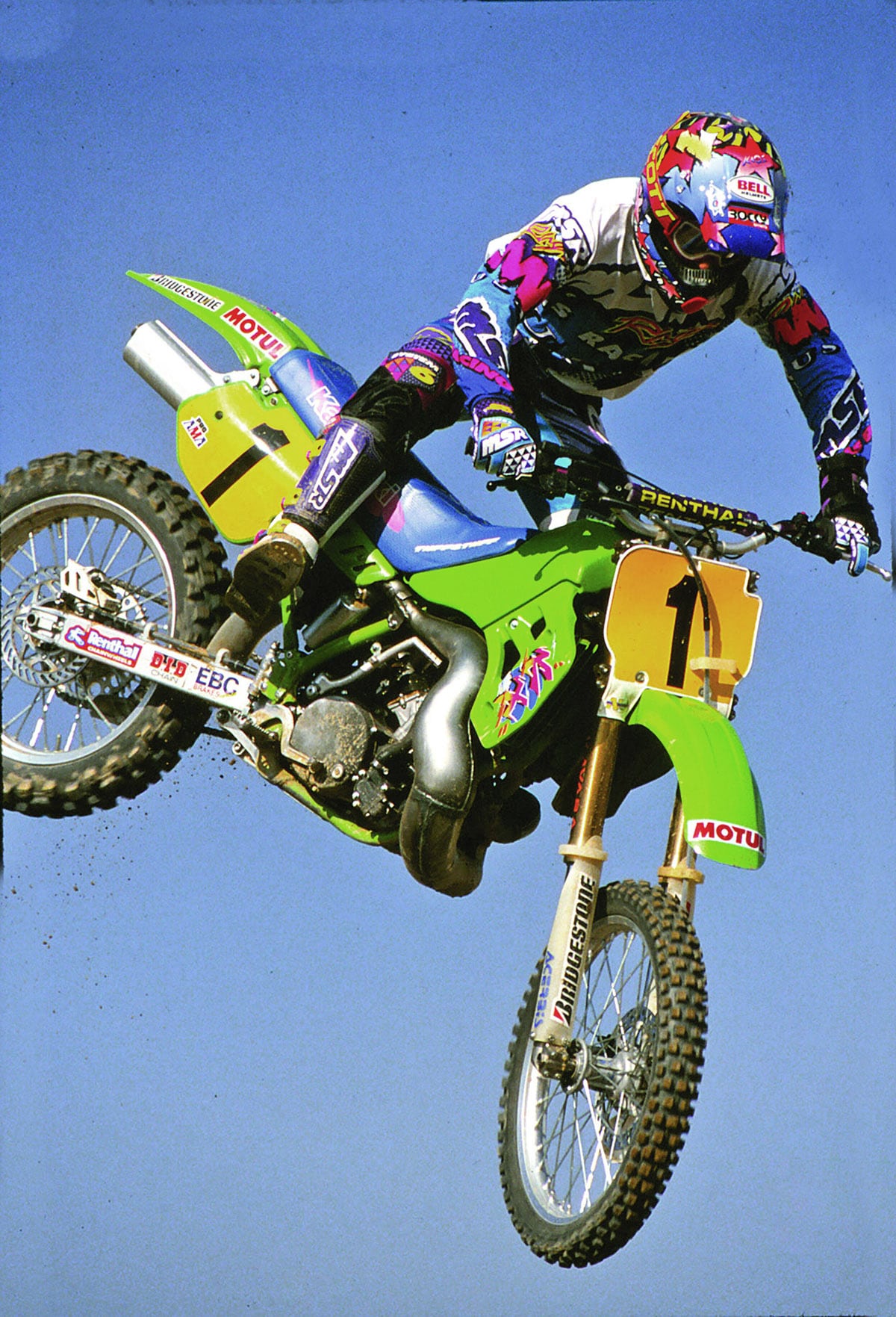