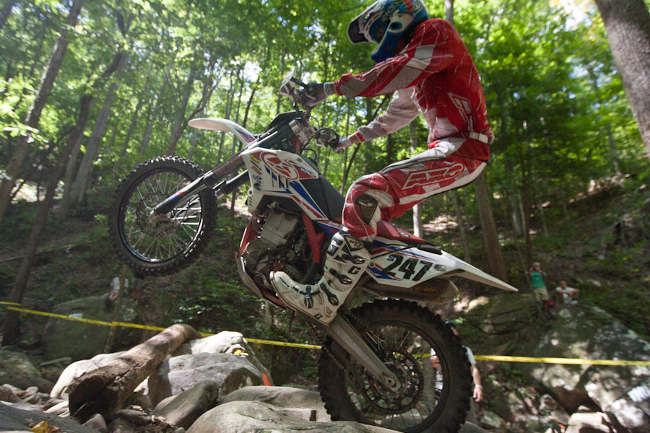 Sequatchie, TN (August 28, 2011) – Tennessee native Mike Brown outlasted a tough field of over fifty riders to win the KENDA Tennessee Knockout, fueled by Monster Energy. The first time “American Extreme Enduro” lived up to its billing as a tough race as Brown noted at the finish that the 40 minute long main event “Was tougher than anything I have ever done. At the halfway mark, I thought I would not be able to finish but I was leading so I kept pushing”. Cody Webb, the factory Beta rider and 2010 AMA Trials champion that has become a regular podium finisher in EnduroCross events finished second and was within striking distance of Brown on the final lap before stalling his bike. Bobby Prochnau, the super tough Canadian KTM rider finished third.

Taddy Blazusiak, the pre-race favorite was eliminated from the competition during the first Knockout round when a minor crash knocked the fuel injection system loose and forced him to pull out of the event. Blazusiak was a good sport though and stuck around all afternoon to cheer on the other riders.

The four round format started with a single timed lap on a very extreme “short” course that took Cody Webb three minutes and twenty five seconds to complete. Brown was just two seconds behind and GEICO Honda’s Kyle Redmond was another four seconds back. This set the starting order for the 50 riders that would go into Knockout round one with the fastest riders going first and getting the advantage of less dust but also the disadvantage of having to pick the lines for the first time on the ten mile “long” loop.

Brown showed his strength on the long loop with a 39 minute and 7 second time that set the standard. Webb was very close with a 39:25 lap and Prochnau came in with 39:56. Kyle Redmond was fourth at 40:59 and Am-Pro Yamaha’s Jordan Ashburn at 41:41. Paul Whibley was next in line followed by Colton Haaker, Rory Mead, Michael Williams and Dustin Gibson rounded out the top ten riders.

Brown rocketed to the front of the pack at the start of the ten lap main event while Webb found himself on the ground in the first turn. Prochnau ran second followed by Whibley while Colton Haaker and Rory Mead battled for forth. Webb moved past four other riders on the first lap, which took around four minutes. Michael Williamson, a relatively unknown Tennessee based rider that turned heads all day with his speed unfortunately crashed after not making it up an extremely difficult alternate line up the side of a cliff and dropped out on the first lap. Brown pulled a few seconds gap and rode conservative lines while several riders battled for second. Webb finally got to second at the halfway point and began to reel Brown in. By then, Haaker had taken a tumble with an aggressive line on a downhill to take him out of contention. Whibley had a chain derail on his YZ250 2-stroke on lap five and lost a few positions. After nearly 40 minutes of racing, Webb moved to within striking distance of Brown on the final lap but stalled and tipped over to provide the gap that Brown needed to take the victory. Rory Mead had also closed in on Prochnau but slid out in a turn while trying to take the final podium spot. Whibley climbed back up to fifth after battling with an impressive Ashburn. Redmond and Palmer were the final two finishers in seventh and eighth.