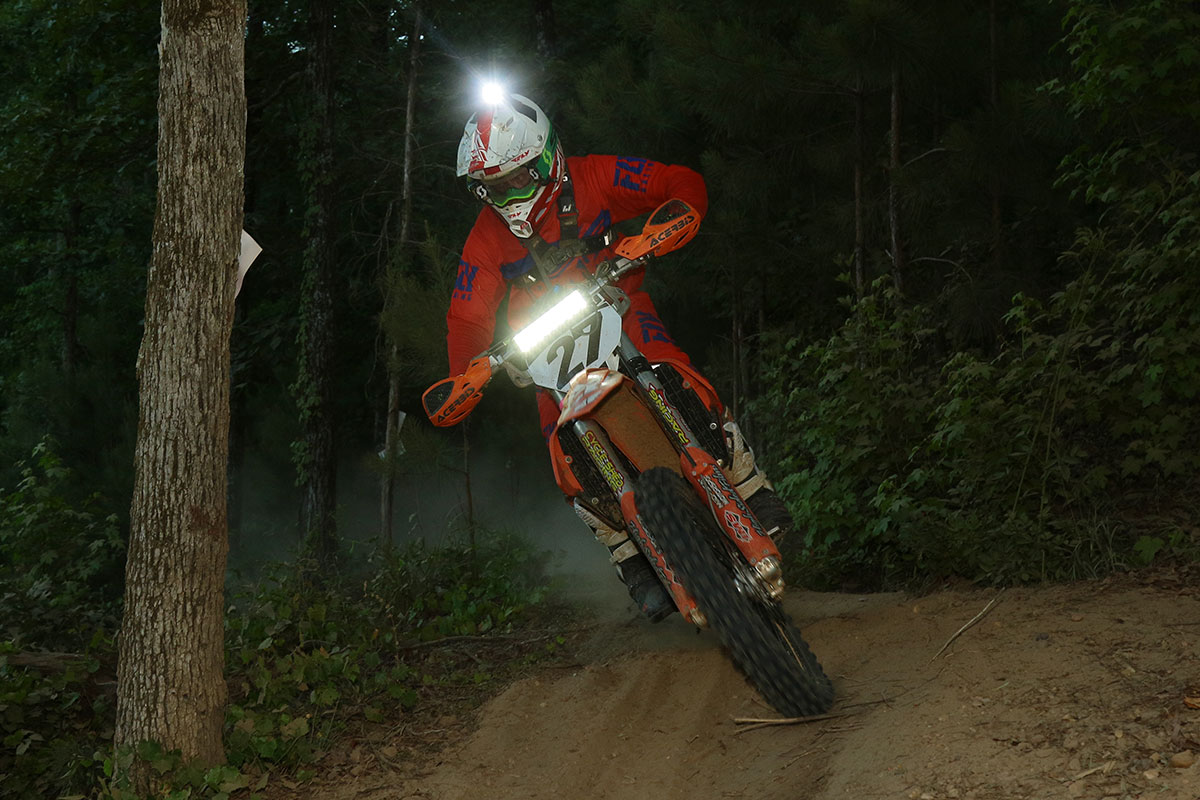 The Team was the brainchild of Russell Bobbitt. “I have been wanting to do a 24-hour race. 2011 was the last year I raced here.  Brad was on the team. I was talking to Cole and KTM and said, hey let’s get the band back together. Geoff Braico and I have been friends since we met at Six Days. He raced the 24-hour on the winning team last year. So, he came over from Australia for the race”. The team finished 19 minutes ahead of the runner up team and rode consistent laps with a 30-minute average lap time. Each rider riding 4 laps each.

Braico set the fastest lap of the race on lap 43 with a 26.21. Per Bobbitt, “We were fairly issue free. Cole did burn up a set of pads on his first outing on the course. Brad had some lighting issues during the night and 2 of the guys had problems with their helmet lights.  But all in all, a really good race. It was one of the dustiest 24-hour races I have raced. We changed a lot of air filters.  Without the help of KTM USA, XC Gear, Michelin Tires, IMS, Moto Minded, Solid Performance Suspension, Enduro Engineering Recluse and Akrapovic, it wouldn’t have happened.”

In the runner up spot was Team NAP/XC Gear Elite 1. The team of Darin Downs on a KTM 350, Heath Harrison on a Kawasaki, Steve Nicholas on a Husky and Will Sievenpiper on a KTM, finished 48 laps just 19 minutes behind the winning team.

Darin Downs stated: “It was super dusty, we were 3rd off the start and moved into second after 4 laps. We rode consistent and held second. During the night the Max motorsports team had some lighting issues and we got within 7 minutes of them. Then around midnight we had our own light problems. We fixed the wire then a few hours later had a light go out again. Will fell during his stint at night and got sick so the 3 of us finished the race. I ended up with 14 laps. All in all, we put in a good effort. Heath and I are motocrossers and we had blister problems with our hands”.

Finishing in the final podium spot was Team NAP/XC Gear Elite 2 of Corey Jordan on a Husky, Dalton Riddle on a KTM, Payton Attaway on a KTM and Andre Clark on a KTM. They had a consistent ride with riders racing 3 to 4 laps each turn. At times the team made it as high as second but after several hours of racing, settled into third for the remainder of the race. Corey Jordan had bike issues and struggled into the pits. Unable to repair the bike he shared Dalton Riddle’s bike for the remainder of the race. Andrew Clark said “When the sun went down, we had a few issues with the lights, mainly just getting things adjusted. The helmet lights were covered in dust and made night riding difficult. Payton crashed pretty hard around 3 or 4 AM and bent his bars. We had a few minor obstacles, but overall pleased with the race.”