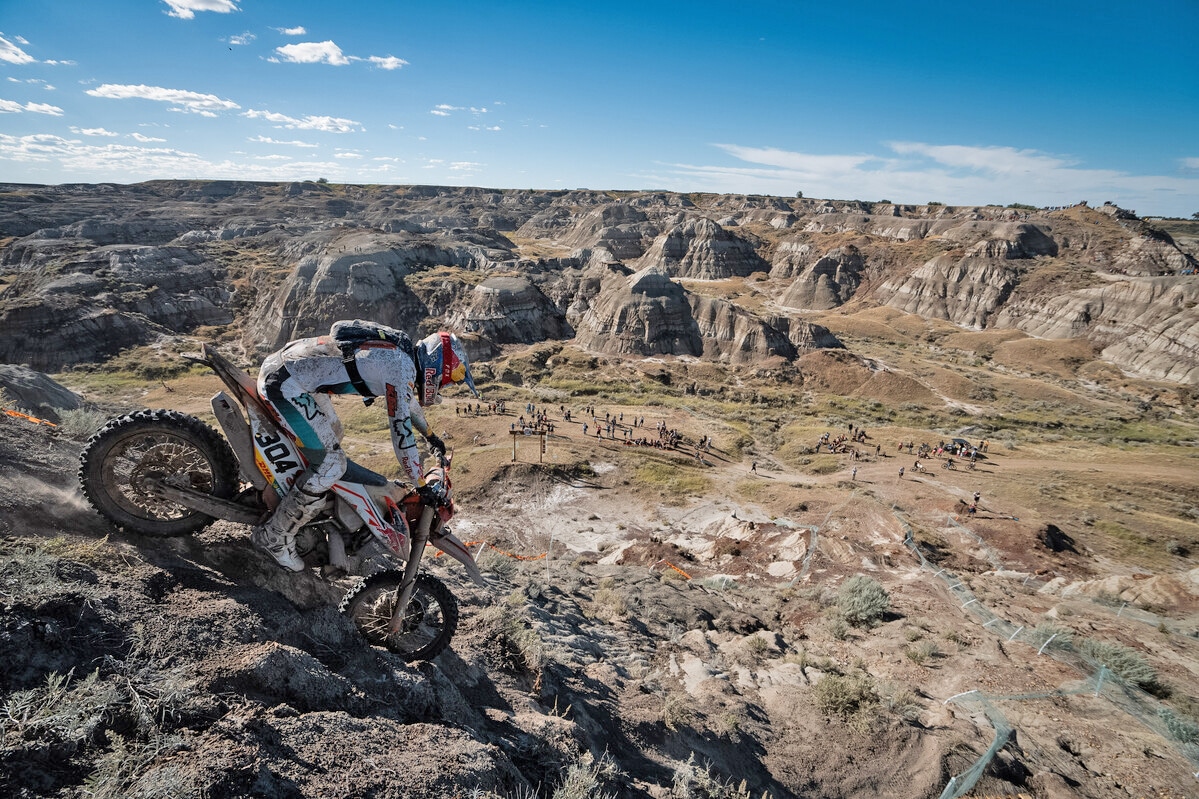 Germany’s Manuel Lettenbichler has ridden to victory at round seven of the FIM Hard Enduro World Championship, Red Bull Outliers in Canada. The Red Bull KTM Factory Racing rider overcame a titanic battle with home favourite FMF KTM Factory Racing’s Trystan Hart to take the win and claim the championship lead with just one round remaining. Sherco Factory Racing’s Mario Roman pushed the duo hard all the way to round out the podium in third.

Staged across two days, racing got underway in downtown Calgary with an urban Endurocross prologue. However, with the weather turning sour, extremely heavy rain meant the action was short-lived with racing brought to an early close for the day.

With the weather back on side for Sunday, riders faced a two-and-a-half-hour multi-lap Hard Enduro battle through the Badlands region. Famed for its dinosaur fossils, the barren area also served up a mean Hard Enduro course. Steep climbs, tricky off camber traverses and tough drop offs ensured a brutal course to master.

Battle of the Badlands

Hart was quick off the line and tried to make a break, but Lettenbichler, and soon after Roman, had closed the gap. Numerous times each rider pushed to open a lead, but every time they were pulled back in. Back and forth, the lead changed hands multiple times.

With the laps closing down Lettenbichler made a final break for it, taking Hart with him, Roman unable to respond this time. The duo were neck and neck. With the final climb set to decide the outcome, Lettenbichler left it all on the line. Despite a mistake in the final 20 metres, he was quick to remount and took the win by just six seconds.

Although missing out on the home win he came to get, Hart was happy with his efforts for second. Completing the podium, Roman finished just three minutes behind in third. With the top three breaking away, Jarvis Racing Team’s Graham Jarvis took fourth, while GASGAS Factory Racing’s Taddy Blazusiak rounded out the top five.

With one round remaining, advantage is now on Lettenbichler’s side. The German holds a four-point lead over Roman, with just the eighth and final round of the 2022 FIM Hard Enduro World Championship remaining, the 24MX Hixpania Hard Enduro on October 7-9.

Provisional Championship Standings (After round 7)