In the April, 1994 issue of Dirt Bike, Roger DeCoster was wondering how motorcycle manufacturers were allowing their logos to vanish from the bikes their top riders were racing. At the time, apparel makers were becoming a bigger and bigger factor in the competition for logo placement. Today, of course, energy drinks are the key player, but Rogers thoughts are just a relevant today as they were in 1994.

To you and me, a motocross jersey is just a shirt to wear when we ride. For racing teams, professional riders and apparel manufacturers, however, the jersey is becoming a point of major controversy. Actually, it’s not just the jersey, but every square inch on a rider’s body. That’s all considered advertising space, and there isn’t enough of it to go around.
Before this racing season started, there was a lot of commotion among Team Honda, its riders and various apparel suppliers. Honda, quite simply, has been trying to work its name back on to the rider. Look at a picture of Stanton or McGrath from last year. The only place that the name “Honda” is visible usually is on the back of the legs–the part that the rider sits on.
Through the ’70s, having the name of your motorcycle emblazoned across your chest was the normal, accepted and even stylish thing to do. Riders were proud of their motorcycles. The professional race teams would buy some jerseys, print the rider’s name and number on the back, put its own name on the front and then issue them to the riders (I got six jerseys for my first year at Suzuki). Pants and boots were left up to the rider. Later, we added a patch or two to the jersey, usually from Champion spark plugs or Bel-Ray oil.

Then came the ’80s when leathers became nylons (of course, we still called them leathers, just to avoid the embarrassment) and they were available in virtually every color you could think of (and some you would rather not). JT and Broc Glover made it stylish to wear white and pink, and soon no one would think of racing without getting a Troy Lee helmet paint job. Just as had happened earlier in snow skiing, motocross had become a very style-conscious sport. The racing teams welcomed this. It was one less thing to worry about, it generated extra money for the riders, and the stars were guaranteed to look good, with clean new clothes for every heat.
Competition among apparel makers started to grow more intense. There were bidding wars for possession of top riders. As the stakes got higher, naturally, the clothes people wanted to guarantee that they would get some return on this huge investment. The apparel company’s name got bigger and bigger. The motorcycle brand name got smaller and smaller. It has paid off, too. The clothing companies have been very successful in making style a mandatory part of the sport, especially for younger riders. My son Kitch demonstrated this to me last month. We went riding, and I had inadvertently stuffed a Fox jersey and Sinisalo pants into my gearbag. It must have embarrassed Kitch; after riding, he lectured me: How could I have gone out in public like that?
Motorcycle manufacturers saw big money being thrown around. Some of them tried to work out licensing agreements so the apparel makers would have to pay to use the bike’s logo. The apparel makers, for the most part, didn’t go for it–they got more of the advertising area to themselves.Then racing teams started writing contracts to read that the team manager would get to approve all clothing deals. That didn’t work, either. Imagine the situation at the beginning of the year. The team manager wants to win races so he hires sensational young Johnny Jumpfar. Johnny signs the deal, not really paying much attention to the section about apparel approval. Suddenly, Jumpfar is a commodity–three different clothing companies are offering him big money. The clothes people know that, as a factory rider, Johnny will be getting more press and winning more championships. Jumpfar tells them he is clear of other clothing deals-which is sort of half true–and that makes him even more valuable. He signs a contract that just about doubles his salary.
The motorcycle company’s sales and marketing people get angry with the team manager because he let this happen. The manager is stuck in the middle–his primary job is to win championships, so he doesn’t want to upset his star so early in the year, but he brings up the matter and Jumpfar promises to get things sorted out. The season starts, Jumpfar wins everything in sight, and then he knows he can get away with a lot more. The clothing issue is put on the backburner. On the other hand, if he doesn’t win anything, then no one is that interested in what he wears. In either situation, the manufacturer comes out on the short end.
Sure, the clothing people contribute a lot. When the riders’ salaries go up, the sport benefits overall. Still, though, the manufacturer contributes much more to the actual racing effort. The bottom line is that the manufacturer’s race team is doing everything to create race wins and build champions. They deserve their fair share of the credit. Credit, in this case, might just come in the form Of a logo across the rider’s chest.
You might wonder how Honda allowed McGrath to win the ’92 Western Regional 125 Supercross title with hardly a Honda logo, or even Honda colors, in sight. In that case, Honda was trying to make an investment. By allowing the Peak/SplitFire colors to be dominant, Honda was fishing for outside sponsors to come in and help with the cost of running the race team. The key difference was that Honda was trading away logo space to offset the cost of racing. This year, Honda is putting its foot down–if the team is paying to win a title, it wants its logo displayed, and displayed big.
Coincidentally, this is the year that Honda finally attracted a big outside sponsor. Either way, expect to see the apparel company’s logo take a backseat. Frankly, it’s only fair. Let’s just hope that all parties keep things in perspective and that no one gets greedy, especially now that outside sponsors are getting involved in motocross. Honda’s deal might be the blueprint for a new trend in motocross-one that will benefit everyone involved. 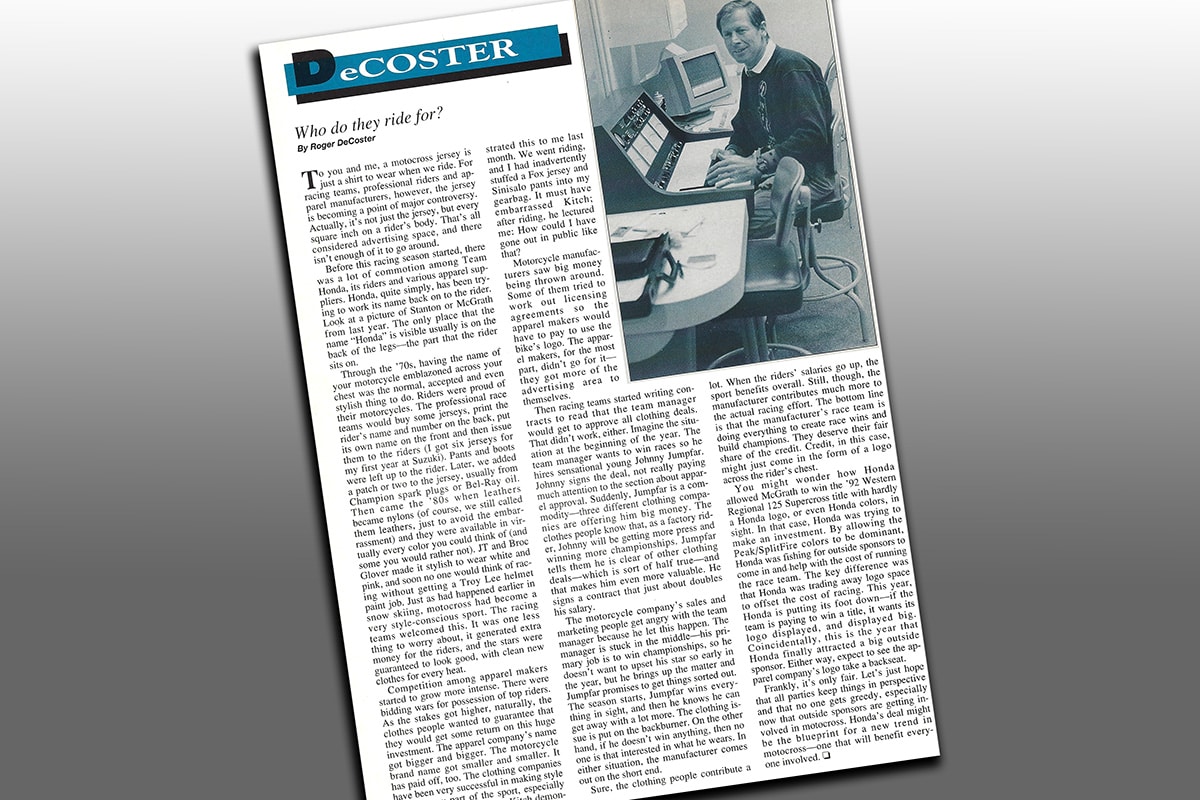 JAMES STEWART INDUCTED IN THE AMA HALL OF FAME