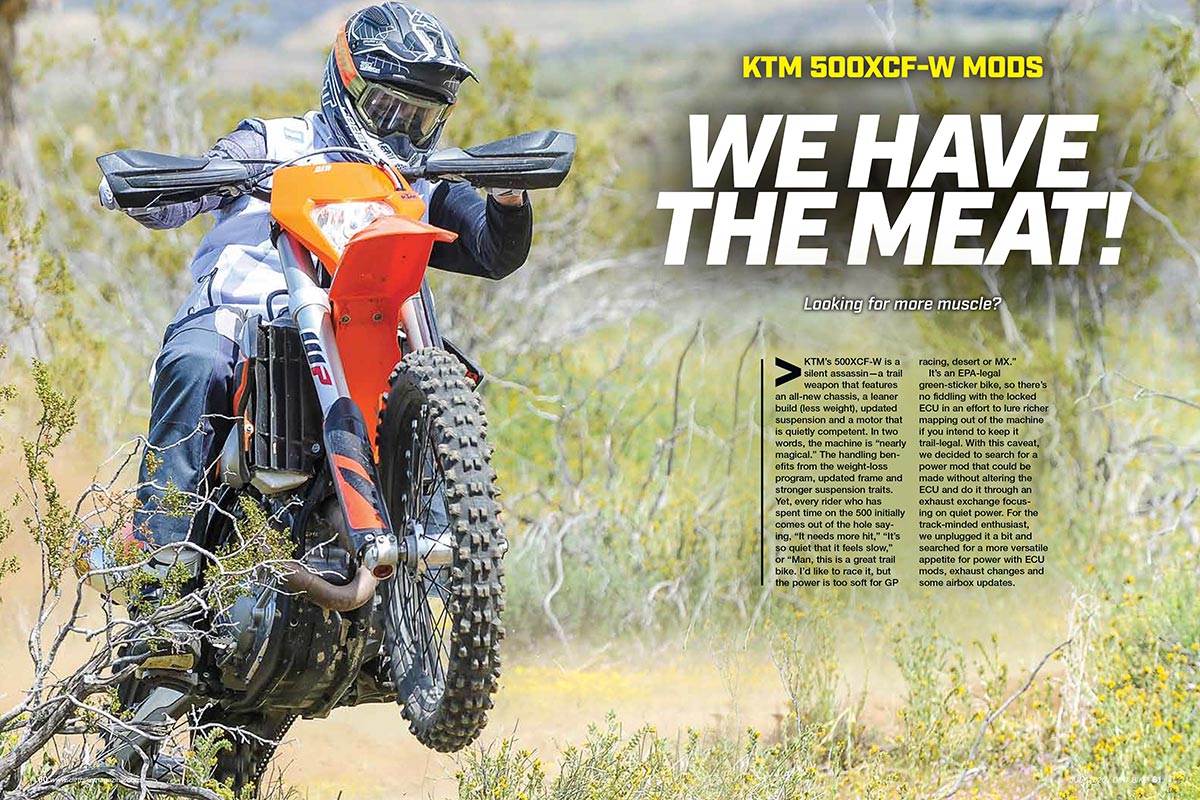 KTM’s 500XCF-W is a silent assassin—a trail weapon that features an all-new chassis, a leaner build (less weight), updated suspension and a motor that is quietly competent. In two words, the machine is “nearly magical.” The handling benefits from the weight-loss program, updated frame and stronger suspension traits. Yet, every rider who has spent time on the 500 initially comes out of the hole saying, “It needs more hit,” “It’s so quiet that it feels slow,” or “Man, this is a great trail bike. I’d like to race it, but the power is too soft for GP racing, desert or MX.”

It’s an EPA-legal green-sticker bike, so there’s no fiddling with the locked ECU in an effort to lure richer mapping out of the machine if you intend to keep it trail-legal. With this caveat, we decided to search for a power mod that could be made without altering the ECU and do it through an exhaust exchange focusing on quiet power. For the track-minded enthusiast, we unplugged it a bit and searched for a more versatile appetite for power with ECU mods, exhaust changes and some airbox updates. 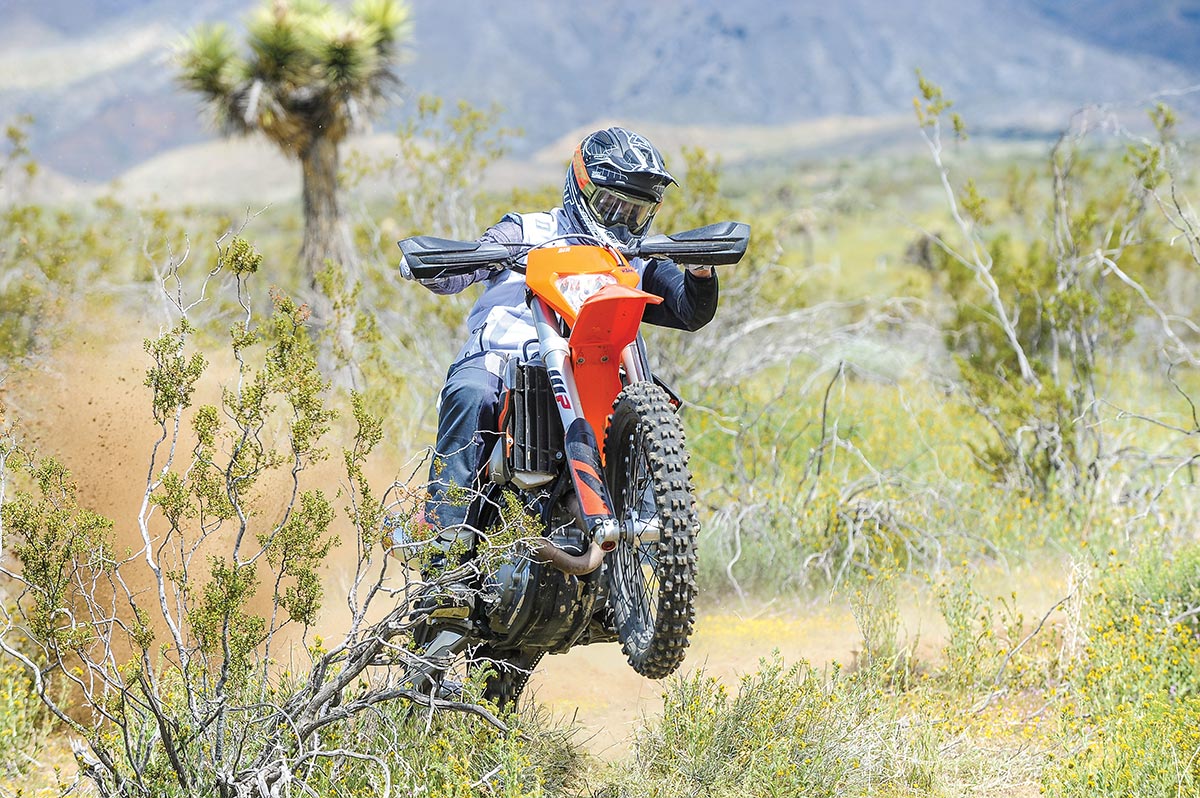 ON THE TRAIL
In this test we left everything stock, with the exception of the muffler. The stock header on the 500 is now a two-piece unit that allows better access to the shock and has an exhaust bung (O2 sensor) on the header pipe. This makes it a closed-loop EFI system where the ECU goes to the O2 sensor for input and the ECU will modify its fuel matrix based on the O2’s readings. In the past, the KTM used an open-loop EFI system, meaning it gets its readings from pre-determined maps stored in the ECU. So, in older open-loop systems, if a muffler flowed better but the mapping was too lean, the bike wouldn’t run well. Since this was our first time testing with a closed-loop system, we weren’t certain as to the outcome.

FMF Q4
The FMF Q4 Hex is fit with chambers and baffles designed to stagger the exhaust flow, resulting in a decibel drop without offending the flow. FMF also uses multi-stage packing material that absorbs and deadens the nasty crack of a four-stroke’s voice. It meets USFS and FIM World Enduro sound regulations and has an internal spark arrestor.
Test results: The FMF Q4 is lighter than stock (5.0 pounds versus 5.8 pounds). It bolted on nicely. The exhaust note is very soft and just a bit rowdier than the stock system. Vigor-wise, the Q4 provided a good power increase from very low into the upper rpm. Every tester noted that the improvement was impressive—and praised the quiet voice.

FMF 4.1 RCT
The FMF Factory 4.1 RCT uses Resonance Chamber Technology (RCT) that enhances the exhaust flow, resulting in an increase in power. It’s shorter than stock and helps with handling since it is closer to the motor. We fit the FMF spark-arrestor insert into the aluminum can/carbon fiber end-capped unit. It’s lighter than stock by 1 pound, 3 ounces.
Test results: Very impressive gains! Now the soft midrange to upper hit comes alive, and there is no loss of smooth power down low for trail riding. The exhaust note is higher than the Q, but is substantially less than a straight 450 motocrosser. But considering that the ECU was stock, there were no airbox mods, and it was a straight bolt-on; it’s a huge increase. For tight terrain riding, the exhaust note stays lighter since you’re not revving it. We have nothing but praise for the smooth and more muscled flow of power, and even when you snap it hard and stay in the throttle, the decibel level isn’t ridiculous. It’s a bit too loud to get under the sound regs for USFS, so it targets the closed-course enthusiast.

CLOSED-COURSE TESTING
Here we are adding two variables to the testing. First, we removed the reed valve in the air boot, which is designed to suppress noise. It’s a strange design where a fairly normal reed-valve assembly is fit right into the airbox’s air boot. It appears to dramatically reduce the amount of air that can pass easily, and we’ve read that it dramatically hurts the powerband.
FMF Q4 with airbox reed valve removed: Very little difference. The Q4 is stronger than stock (muffler), and without the reed, the difference in power felt was minimal.
FMF 4.1 with airbox reed valve removed: Very little difference. The 4.1 is stronger than the Q4, and without the reed, there’s only a hint of a power increase.
If you opt to fit on the Vortex ECU (below), this is where the airbox reed valve seems to make for a power gain.

VORTEX ECU
This is a closed-course-only mod. The Vortex ECU targets improved power across the range via 10 performance fuel and ignition maps. It is instant plug-in performance, as it replaces the standard ECU with no mods required. Vortex works with Slavens Racing, and they equipped the Vortex unit with a Slavens map in setting one and a Vortex setting in the second map on the KTM handlebar switch.

TESTING: STOCK EXHAUST WITH VORTEX ECU, (AIRBOX REED REMOVED FOR ALL CLOSED-COURSE MODS)
A very impressive gain over the stock ECU. With the standard muffler, the sound level is incredibly soft, and the machine’s power was totally charged once we installed the Vortex unit. Overall, there was an increase pretty much across the usable range of power. This mod caught us unaware; we were shocked by the big gains in the powerband. 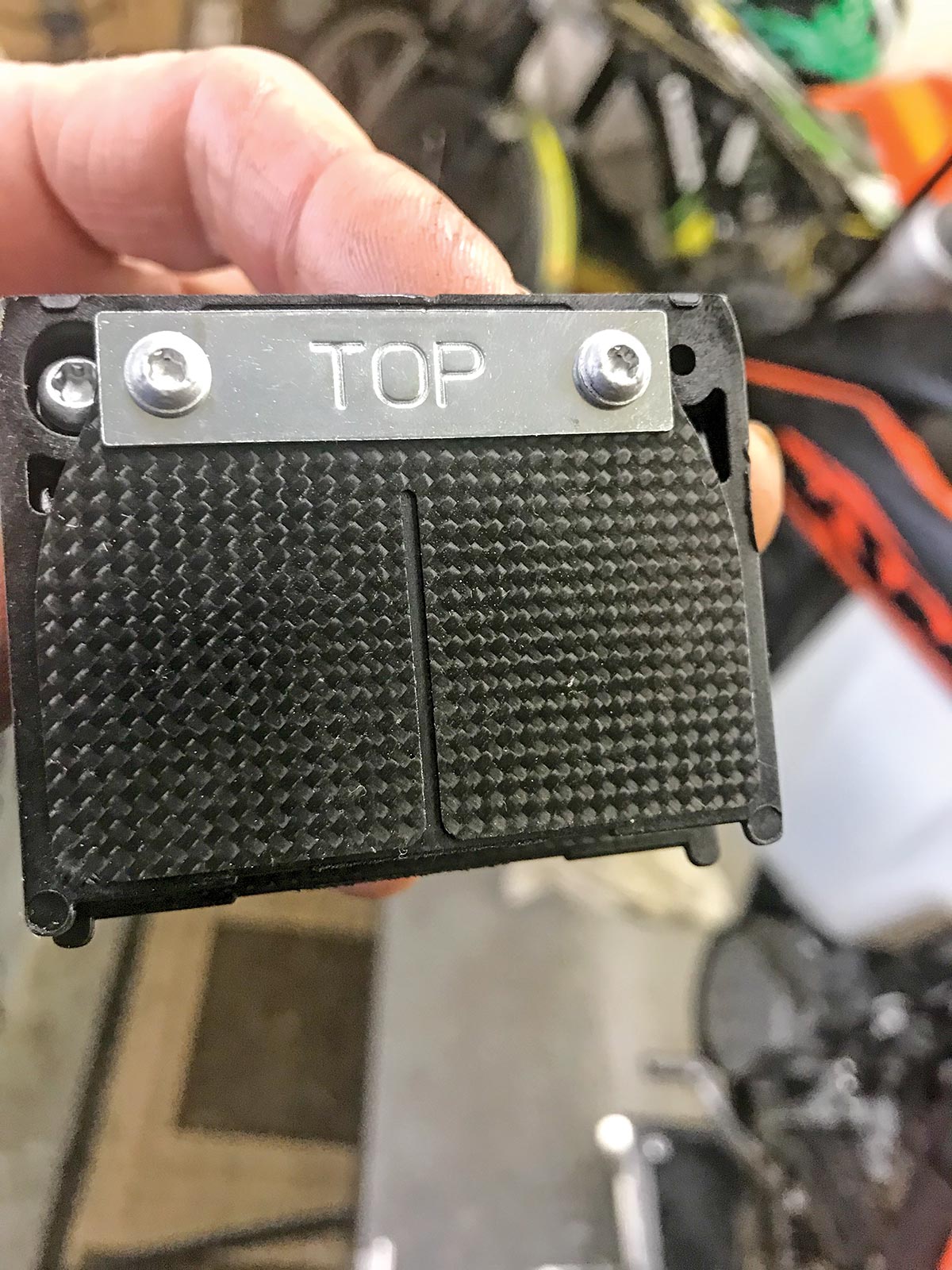 TESTING: FMF Q4 WITH VORTEX ECU
This mirrored the gains with the stock ECU, only much stronger. It’s still very quiet. Good trail-able power down low. No flaming out, hitches or coughs. Strong mid and goes out much further than stock. The Vortex ECU, higher-flowing FMF Q4 and the airbox mod made for stealthy power that was substantially stronger than stock!

TESTING: FMF 4.1 WITH VORTEX ECU
It not only saves 1 pound, 3 ounces of weight. This combination makes some seriously grand power. Incredibly, it stays just as usable down low and does not cough or flame out. The mid and peak power are impressive, as it seamlessly pulls long with a substantial hook on top. The noise level is well below a standard 450 motocross bike’s, and we ran ours with the SA insert. One tester called it the “Oh, baby” setup, as it was smooth, strong and seamless. Once you kept the throttle matted, it turned into “Oh, baby” time!

IN CLOSING
We believe that the closed-loop EFI design on the 500XCF-W plays a strong role in making meaty, no-flame-out power. Nearly every mod we tried maintained ridable bottom-to-mid power. Our final results showed that for the trail/enduro rider who demands a legal machine, a switch to the FMF Q4 maintains the legal decibel level and provides a good and broad power gain.

With the closed-course mods, it broke down this way: