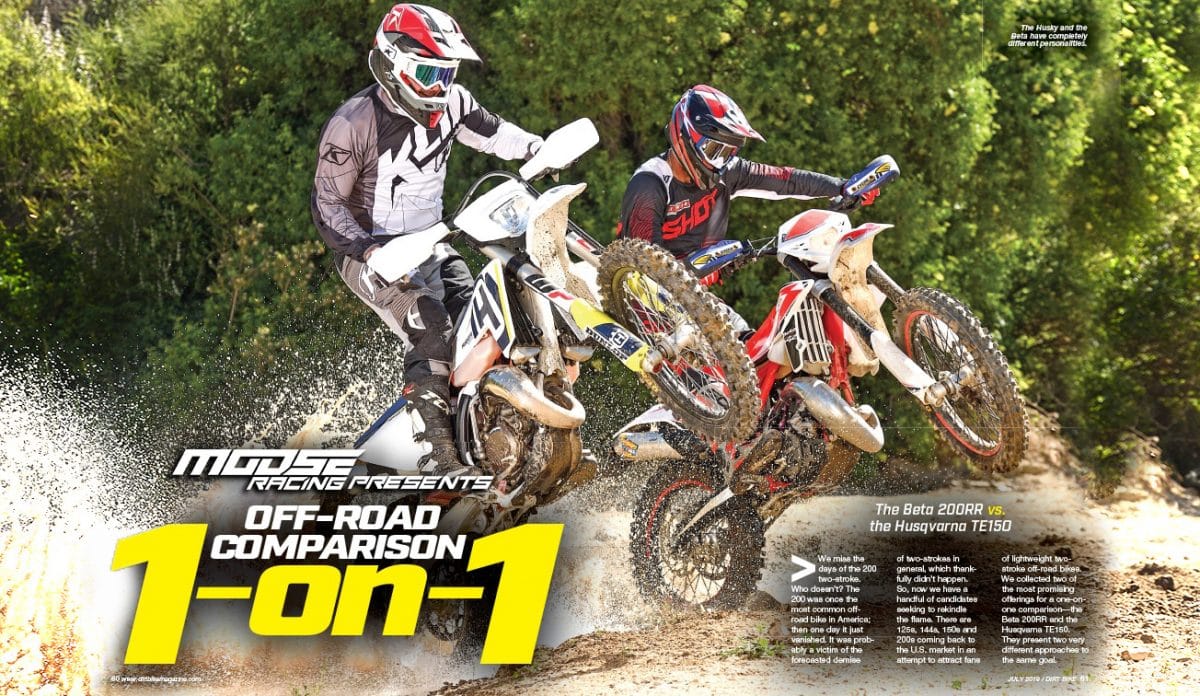 The 200 was once the most common off-road bike in America; then one day it just vanished. Now we have a handful of candidates seeking to rekindle the flame. There are 125s, 144s, 150s and 200s coming back to the U.S. market in an attempt to attract fans of lightweight two-stroke off-road bikes. We collected two of the most promising offerings for a one-on-one comparison—the Beta 200RR and the Husqvarna TE150. They present two very different approaches to the same goal.

BETA 200RR
It’s interesting that Beta would be one of the companies to bring back the 200. Back when the KTM 200 was in its heyday, Beta wasn’t even making off-road bikes. Now, the small Italian maker has come to be defined by its two-stroke off-road bikes, so the 200RR is a logical addition to the line. When the company introduced a new 125 two-stroke last year, that motor was designed to be a 200 as well. That’s more complicated than you might think; you can’t accomplish that with an increase in bore alone. The piston gets too heavy for the short stroke, and it just doesn’t run right. So, the new motor was designed to accept a larger crank, as well as a new top end. The 200RR motor is still very similar to the 125RR motor, but with a 62mm bore and a 63mm stroke versus 54 x 54.5. That gives the 200 an actual displacement of 190.2cc. The 200 was also designed to be electric start. A starter motor was added under the crankcase, and the kickstarter lever was removed. If you want it back, there’s a kit available. In design, the motor isn’t that different from the 200s of the old days. It doesn’t have fuel injection or an electronic power valve. The carburetor is a 36mm Keihin PWK, and it feeds a Moto Tassinari reed valve. The power valve is operated by a mechanical ball-ramp mechanism, just like a 125 from the ’80s. The one feature that didn’t exist back in the day is the Beta’s electronic oil-injection system. You don’t have to mix oil in the gas on this bike.
Beta designed the chassis specifically for the 125/200 platform, although it looks almost exactly like the frame from the bigger two-strokes. It’s just a little smaller in most dimensions. It also has a different fuel tank. The fork is a Sachs with adjustable preload, and the rear shock is also a Sachs with fairly conventional linkage. Beta didn’t reinvent anything with this bike. It is, however, much lighter than the 200s from back in the day. The Beta weighs 211 pounds without fuel. In 2000 a Kawasaki KDX200 weighed 238 pounds and a KTM 200EXC weighed 228 pounds. Neither had electric start.

HUSQVARNA TE150
The year 2013 marked the official end of the KTM 200 and the 200 era. By then the KTM 150 had already been around for five years, gradually cannibalizing the 200’s sales until there was nothing left. By the time the Husky TE150 showed up, it was more or less official: the 150s were supposed to be the new 200s.

The first Husqvarna TE150 came along when the Husky TC125 got a new, more compact motor in 2017. Like Beta, Husqvarna used a 125 as the basis for the 150. In this case, the stroke was unchanged, so a displacement of 144cc was all that was practical. In fact, if you have a TC125 and want to make it into a 144, there’s a kit that includes a top end and an ECU. The new 150 not only had a bigger bore than the 125, but it was designed to accept an electric start. Husqvarna elected to leave the kickstarter in place on this bike. Once again, this is a very traditional design. It has a carburetor and a mechanical power valve. The Husqvarna uses a 38mm Mikuni TMX carburetor.
The chassis is typical of Husky off-road two-strokes and has a number of features that set it apart. The first is the composite airbox, which is integrated with the subframe. Another is the Magura componentry. The brakes are Magura hydraulic discs, and the clutch is actuated by a Magura master cylinder. The suspension components are WP. In the front it uses the Xplor coil-spring fork, and in the rear the WP shock connects to linkage. Altogether, the Husqvarna comes in at 206 pounds without fuel. Wow.

THINGS THAT ARE THE SAME; THINGS THAT ARE DIFFERENT
On paper these are two very similar bikes: small two-stroke off-road bikes with six-speed gearboxes, hydraulic clutches, electric start and so on. But, man, are they different. First off, neither one is very much like an old-school 200. They’re both better. At the risk of impugning fond memories, the last of the 200 two-strokes didn’t rev at all. It made marginal low-end power, revved slowly and died off early. The Husky 150 isn’t very impressive down low, either, but it offsets that by revving quickly and getting into the meat of its powerband immediately. Then it really takes off. The little Husky is surprisingly powerful, and when you couple that with an overall package this light, it makes for a very lively, responsive bike. It isn’t just about power-to-weight ratio, either. As we’ve pointed out many times before, a smaller motor has much less spinning mass, and that makes it easier to throw around. 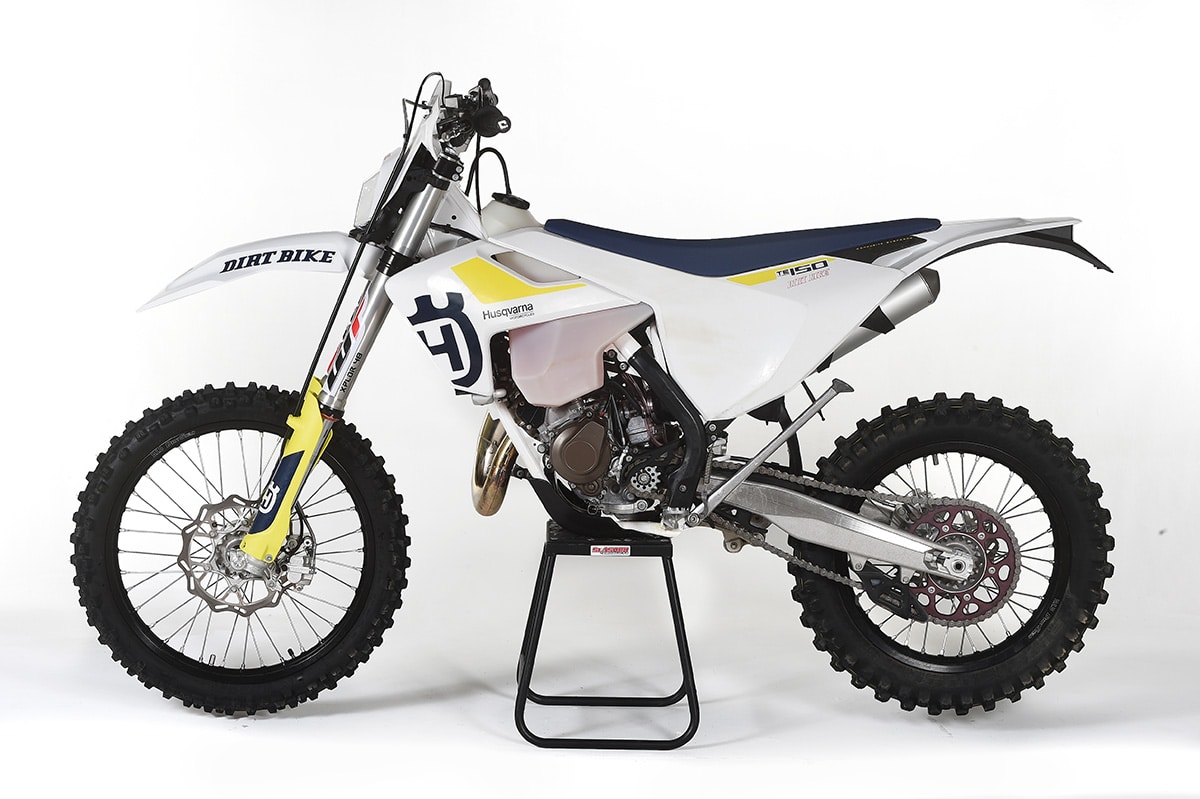 There’s no question that the Beta has a bigger motor. It feels much throatier down low and might even be confused with a 250. You can actually linger in the low-rev zone just above idle without immediately transitioning to higher revs. The Beta is a little mellower and less demanding of instant action. But, like the Husky, it has quick throttle response when you want it. Also, like the Husky, the revvy, responsive motor gives it a feeling of maneuverability. On top, the Beta signs off much earlier than the Husky. Right about the time the Husky is reaching its peak, the Beta is already done. The Husqvarna has a more impressive peak, but the zone where it’s making more power than the Beta is actually quite brief. 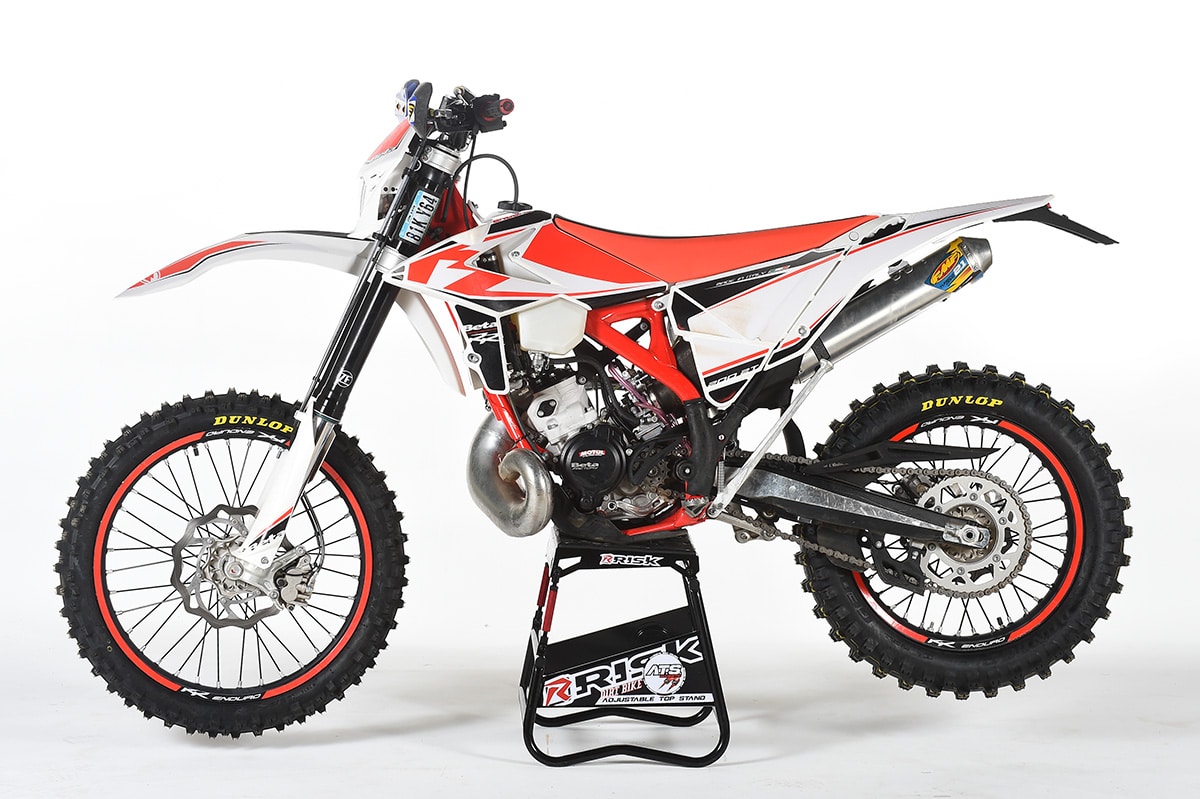 Both bikes are on top of their game when it comes to jetting. They’re both super clean down low; they don’t miss, bog or detonate. The Beta can, at times, surge and act slightly lean, but once again, they both are far better than the 200 two-strokes of the distant past.
In overall handling, both are absolutely phenomenal. These two machines are among the lightest off-road bikes in the world, and that gives them a huge advantage over big four-strokes and even 300 two-strokes. You feel like you can take them right to the brink of control, then push a little harder without consequence. If you do get out of shape, it takes very little muscle to bring theses bikes back into line. Of the two, the Husqvarna feels the lightest and easiest to muscle around. It’s a little narrower, lighter and has more predictable steering. The Beta is a very stable machine on straight and level ground, but it comes with very soft suspension settings. The fork, in particular, is so soft that it always seems to be halfway though its stroke, which quickens up the steering when you brake for turns. The bike is probably aimed at younger riders in the 120-pound range. That might or might not be the market for this bike in the U.S. It’s too early to tell. Luckily for bigger, older guys, the preload adjuster on the top of the right fork leg actually works well. You can greatly improve the bike’s ability to stay up in its stroke by maxing out the adjuster. Even so, it’s a soft bike, even for smooth trails.

We can’t say we’re crazy about the Husqvarna’s Xplor fork, either. It’s soft as well. On the average trail at a casual pace, it’s fine, but when you get more aggressive, the fork feels loose and moves a little too freely. When you increase compression damping, it’s more stable but gets harsh. We have just enough experience with this fork to know that suspension tuners can make improvements, but it’s never easy and often requires multiple attempts. For both bikes, the rear suspension is also on the soft side, but easily adjusted with preload and clickers.

FINE ART
Both bikes are great machines to ride and own. Aside from their lack of weight and their responsive motors, they’re highly refined and well-made. They both have excellent details and components. Here’s how some of the components compare.
Brakes: Both bikes stop incredibly well, but the Beta’s Nissins are more powerful than the Maguras on the Husky.
Clutch: Both have super-easy clutch pulls, but the Betas can occasionally act up. It squawks and gets grabby when it gets hot, whereas the Husky’s clutch pull is always the same.
Handguards: The Husky has them; the Beta doesn’t. We added a set of Cycra Rebound handguards to our test bike.
Noise: The Husky is considerably louder than the Beta. Neither has a spark arrester. The FMF you see pictured on the Beta here, once again, isn’t stock.
Tires: The Husqvarna comes with Dunlop Geomax AT81 tires. The Beta has Michelin Enduros with short Euro-spec knobs. The Michelins work well on hardpack soil and are a secret favorite among extreme riders. For most of our testing in the loose soil of Southern California, the AT81s work better, so when it came time to replace the tires, we put a set on both bikes.
Bonus round: We love the oil-injection system on the Beta.
Price: The Husky sells for $8499. The Beta is $8399.

THE FINAL SHOWDOWN
These are two of the greatest off-road bikes we’ve tested this year. They’re crazy light and magically fun to ride. But, as it turns out, they aren’t really made for the same rider. The Husqvarna is like an exceptionally powerful 125 with a big hit and lots of excitement. It’s the perfect bike for a young off-road rider transitioning to big bikes, much in the same way that a 125 is for motocross riders coming right out of the mini class. The Beta can serve that market, too, but we think it will really find a home in the hearts of older riders. It’s much less demanding and is just as happy when it’s cruising at half speed as it is going all out. When the original 200s went away, older riders were the ones who felt most abandoned, and the Beta is the perfect machine to pick up that legacy. In the end, there’s plenty of room for both bikes in the market, just not in the same garage.