LIFE AND TIMES OF THE HONDA CR250R 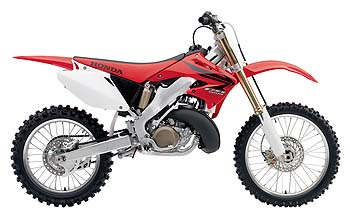 In the auto world there was the Mustang. In aviation it was the P-51 and in bicycles there was the Schwinn Sting Ray. There are timeless classics in each field, and in the dirt bike world, there’s nothing that has reached that status like the Honda CR250R. Even though it’s been out of production in the U.S. since 2007, the CR probably won more combined amateur and professional races than any other motorcycle in the dirt world. And they are still out there winning. The CR is a hot commodity on the used-bike market, and on start lines across they still outnumber many current models.
In that 34 year run, the Honda evolved through many forms, completely changing its identity several times. The early models are sought after in vintage racing, and the later ones are still competitive against four-strokes.

Early ‘70s: Unfortunately, the CR250M didn’t keep pace through the early ‘70s. It was offered almost unchanged in 1974 and 1975, then received a conservative makeover in 1976. That allowed Yamaha, Suzuki and European makers to regain the high ground. In the meantime, Honda’s factory racing team was riding something completely different.
1978: Honda released a stunning new 250cc two-stroke, redubbing it the CR250R. It had a Euro-style engine with the output shaft on the right and a reed-valve intake. Probably the most memorable aspect of the bike was its striking appearance. Everything, even the motor was fire-engine red. Honda leapfrogged back to the front of the field in magazine shootouts and sales. The following year, the 250 was spared the 23-inch front wheel that came on the 125 and several other models.

1980: This was an oddball year. Honda completely redesigned the bike with a center exhaust port and a double-down-tube frame. Then the bike was completely ash-canned a year later despite good reviews. In 1980, plastic gas tanks were ushered in to the delight of riders at the time. In retrospect, it was a sad day; another era that had passed.
1981: Honda predicted the coming of liquid-cooling and single-shock suspension, and rushed to meet the call  The 1981 Honda CR250R leaped years ahead–in fact, it was [too] advanced. It was a little too much too soon, and this actually became a rare year [not] to own a Honda. It had reliability problems and the new Pro-Link rear suspension didn’t work well. Once again, Honda lost its edge in the 250 class. Over the next two year, the bike received back-to-back changes on a fairly large scale and most of the problems were sorted out, making ‘83 a very good year to ride a CR.