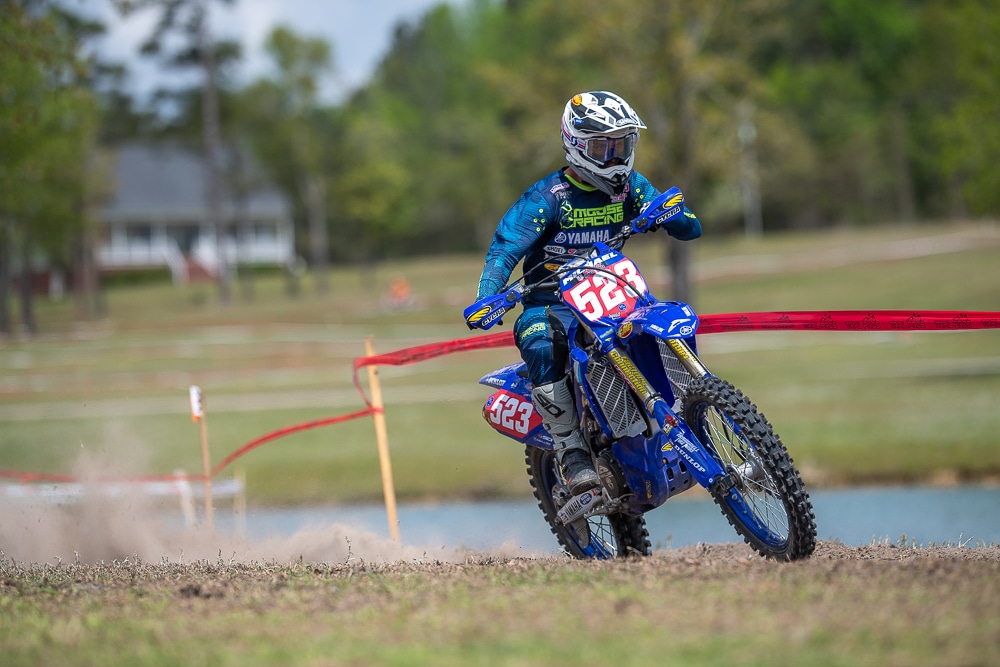 Society Hill, SC (April 10-11, 2021) – Am Pro Yamaha’s Layne Michael dominated round 3 of the Kenda AMA US Sprint Enduro Series held at Moree’s Sportsmen Preserve near Society Hill, South Carolina, winning eight of the twelve tests en route to the overall victory. Michael was untouchable in the Cross test, sweeping all six on the weekend, while adding two Enduro test wins to his total.

In the end, Michael finished the two-day event with a 19-second advantage over Coastal Racing GasGas’ Johnny Girroir to claim the overall win, while Am Pro Yamaha’s Steward Baylor was third overall and second in the Pro1 division another 36 seconds behind Girroir.

To add to a stellar weekend that included second overall and first in the Pro2 division, Girroir also posted the fastest overall time for Saturday’s round, giving him his first-ever Pro-class “day win”. Girroir won all three of the Enduro tests On Saturday, while Michael won all three Cross tests. When the scores were tallied Girroir came out on top of Michael by .7 seconds.

Baylor came into the race with an 11-point advantage over Michael in the series standings, having won the first two rounds. However, a crash in the opening Cross test on Saturday put the South Carolina rider in a deep hole that he would spend the rest of the weekend trying to dig his way out of.

Baylor came out swinging on Sunday, winning the first Enduro test of the day, but was still unable to make up the distance to Michael. “On Sunday, I rode like I knew how to ride,” said Baylor. “This really fast stuff terrifies me, so I didn’t push it any harder than I needed to. I could have done a little bit better, I think, but I wasn’t worried about Johnny [Girroir] ahead of me in the overall. I just knew that Layne was ahead of me in Pro1. Considering the start we got, we came out pretty good.”

Phoenix Honda Racing’s Cody Barnes came out on top of the tight battle with Trail Jesters Racing KTM’s Jesse Ansley to finish fourth overall and second in the Pro2 class. Barnes was also the top-finishing LOI (Letter of Intent) rider, which is for riders hoping to qualify for this year’s International Six Days Enduro in Italy.

Ansley, who had hand surgery just two weeks before the race, got the upper hand over Barnes on Saturday, beating the Honda rider by .4 seconds. However, a hiccup in the final test left Ansley just .5 second behind in the overall. Liam Draper came into Society Hill on a roll having won the first day of the previous round at The Shoals. The Tely Energy Racing KTM rider would have to settle for sixth overall and third in the Pro1 class after struggling with the wide-open course.

Hoping to qualify for this year’s ISDE, Tyler Vore taped up his shoulder and rode the final test on Sunday with a broken collar bone, having crashed hard in the previous test. The Indiana rider managed to salvage seventh overall and first in the Pro-Am class. Seven Sixty Husqvarna’s Ben Nelko put his motocross skills to good use to finish eighth overall and fourth in the Pro2 division. Meanwhile, Honda rider Nicolas Swenson was the top-finishing Amateur rider with a ninth overall. The finish was also good enough for first in the Open A class. Dalton Seals rounded out the top 10 overall on a Yamaha, good enough for second in the Pro-Am division.