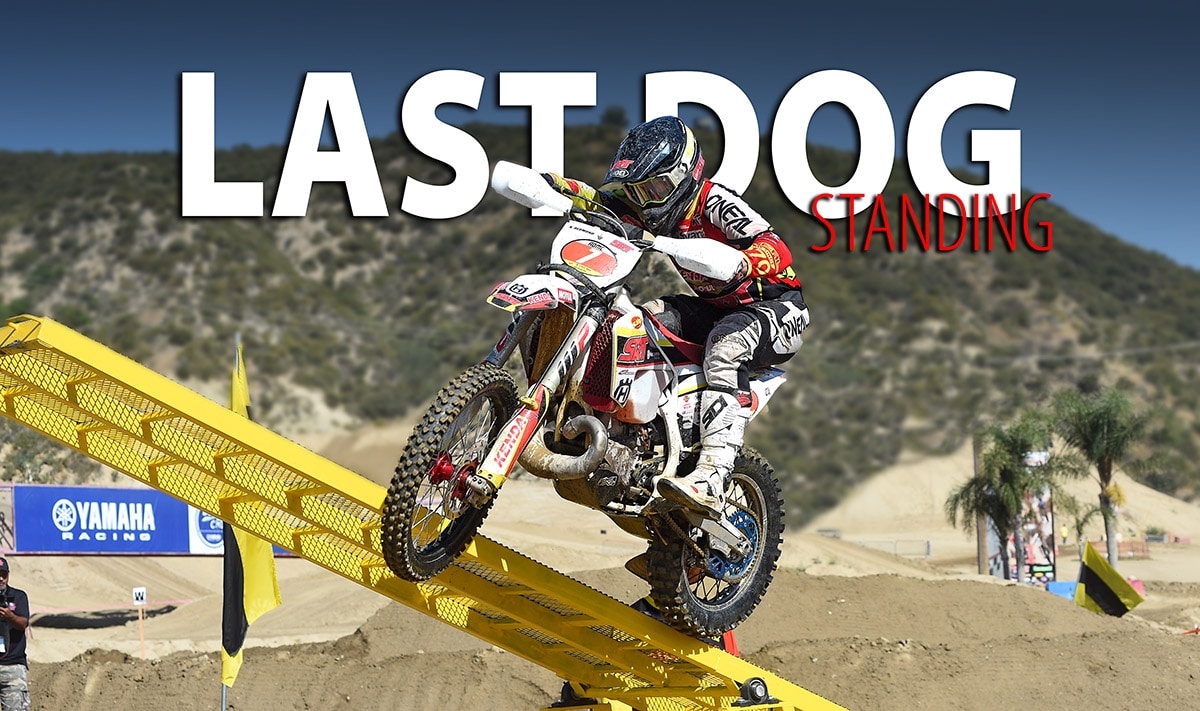 SRT’s Kyle Redmond won what was unquestionably the toughest edition in the history of the Last Dog Standing Extreme Enduro Saturday. The Prairie Dogs MC and Desert MC team up to put together the three-stage event each year at Glen Helen Raceway, using every inch of the facility. For the eighth running of the race this year, support by AOMC and SRT made a $10,000 purse possible, and with four-time winner Cody Webb out of action, there was no clear favorite. Two former winners were in the crowd: Redmond, who recently joined the Dirt Bike Magazine staff, and Red Bull KTM’s Taylor Robert, who has been on a winning streak since returning from injury earlier in the season.

The race format features four stages. First, pros run a 15 minute prologue on a greatly simplified course, then sportsmen are lined up for a 60-minute conventional grand prix called LD1. Those two events determine the start order for LD2, which is a single lap around an extreme course. The main features this year included a 300-foot “rock trough,” Last Dog Canyon, Ferrell’s Alley, Greg’s Gulch and the infamous tire mountain. Riders who finish within 60 minutes of the leader are invited to return for LD3. That consists of two laps around the same course with several bonus sections thrown in. This year, those bonus sections turned out to be decisive.

The Prologue started with Taylor Robert in front, but he was passed by SRT’s Cory Graffunder in a man-made mud hole. Cory stretched out an immediate lead, but the teeter totter was his undoing. The Prairie Dogs had built this structure out of steel, and it generally requires a rider to proceed slowly up the ramp then pause at the pivot point to wait for ramp to drop. Cory didn’t ride slowly or wait, basically turning the whole thing into a gigantic jump. He landed flat and possibly broke his ankle. That left Redmond to win the race followed by Robert and SRT’s Trystan Hart. Then the pros got to take a break while the sportsman rode for an hour on a long course of typical off-road terrain. Zach Spano was the winner, ahead of Brandon Macan and Jordan Gamboa.

LD2 had Redmond start side by side with Robert, followed by the rest of the field of over 100 riders, all starting two-by-two. Robert, Trystan Hart, Redmond and Noah Kepple all kept tabs on each other through most of the race. Robert came out on top this time, with Hart second and Redmond third. The promoters deliberately made this round easier than in the past so that more riders could finish within the one-hour limit. Altogether, 25 riders qualified for LD3.

The final race turned out to be more difficult than anyone expected. The first of the additional sections was a hillclimb right off the start that forced Robert to take a second try. That allowed Hart and Redmond to get away. By the time they came to Tire Mountain, all three riders were together. Taylor struggled, allowing Hart and Redmond to get away. Then the three of them, along with Kepple and Mitch Carvolth, disappeared into one of the new canyons. It was an unridden section, and everyone got suck several times. When they emerged, it was Redmond on top. Hart and Robert came out together about eight minute later. On the second lap, Redmond extended his lead. “The second lap was actually easier,” he said later. “The silt was cleared out of the ruts, and you could actually get a little traction.” On the final lap, Robert struggled with dehydration and lost a few minutes to Hart. In the end, there were only four riders who finished with two laps of LD3: Redmond, Hart, Robert and Carvolth. Kepple was credited with fifth for making it farther than anyone else. For preliminary full results for Last Dog Standing, 2018, click here.

For more photos of the 2018 Last Dog Standing, click here.