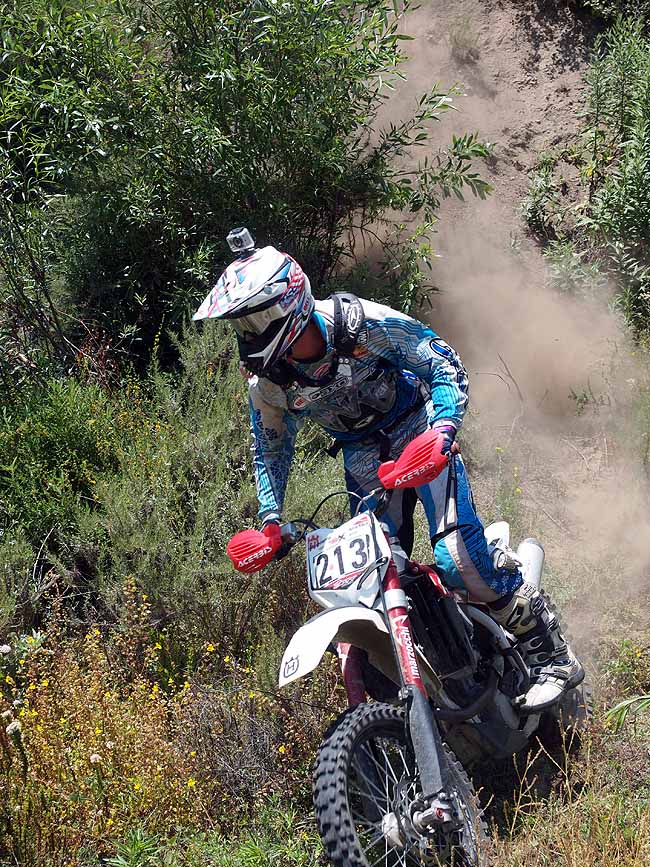 Kyle Redmond won the inaugural “Last Dog Standing” Saturday in San Bernardino with an incredible ride on a impossibly difficult course. The event was inspired by the Red Bull Last Man Standing, but it was truly the child of the Prairie Dogs MC’s Craig Hunter, who also is the clerk of the course for the club’s Big Six event in February. The Last Dog was like nothing ever held before in California.
The District 37 race was held in three stages. The first was a conventional 45-minuteGP with an EnduroCross section. The top 50 percent qualified for a mid-day race that consisted of a single lap around an eight-mile course. But what a lap. Many of the sections were so difficult that club members only walked them beforehand. There were also man-made obstacles like tractor tires, massive pipe sections and narrow bridges. Riders who finished within an hour of the winner qualified for the 5:00 p.m. race which was the same thing plus a few more extreme sections.
The first race had over 100 riders, most of whom were overwhelmed by the EnduroCross. Jacob Argubright was the winner there, although he could have finished as far back as 52nd and accomplished the same thing. That’s how many qualified for the next round.
Officials expected the winner to take over an hour, but it was about 45 minutes when Redmond cross the finish line. Then the stopwatch started. Cory Gruffunder was the next man in, followed by Japan’s Taichi Tanaka, who was only in the U.S. briefly on his way to the Erzberg Rodeo in Austria, which is another extreme race of the same sort. Then it was Quinn Cody heading a pack consisting of Colton Udall, Argubright and Kendall Norman. Justin Jones was eighth on a Dirt Bike Magazine Husky TXC250.
Some riders actually qualified, but didn’t want to ride the course again. Other riders pitched in without complaint to help their competitors. One Kawasaki KX250 rider had his bike break on a series of massive pipe sections just a few feet before the finish. He had 30 minutes to get across the pipes, but it was clearly impossible without the motor‘s help. Two of his competitors, who were exhausted themselves, got off and helped carry the KX through the final section.
A surprising 32 riders finished within an hour of Redmond and had a few hours rest before going out again. To the surprise of the club member, the final round was finished in only 32 minutes. It was Redmond again, who said that many of the technical sections were made easier by the glut of bikes that passed through. Graffunder was second again, but Cody finished in front of Tanaka. Argubright was fifth ahead of Jones, Udall and Norman. The lone entrant on a trials bike was Kevin Norton, who was 11th in both races. His amazing feat was qualifying out of the initial GP on the same bike.
The Prairie Dogs were pleased with the feedback and plan on making it an annual event. Official results are still being tabulated.

Kevin Norton and his Gas Gas.

Kendall Norman said this went very differently in his mind.

Quinn Cody said he had fun. We know him; he really did.

Justin Jones and his spider legs.

Help from other riders is permitted. Only they’re usually in worse shape than you.