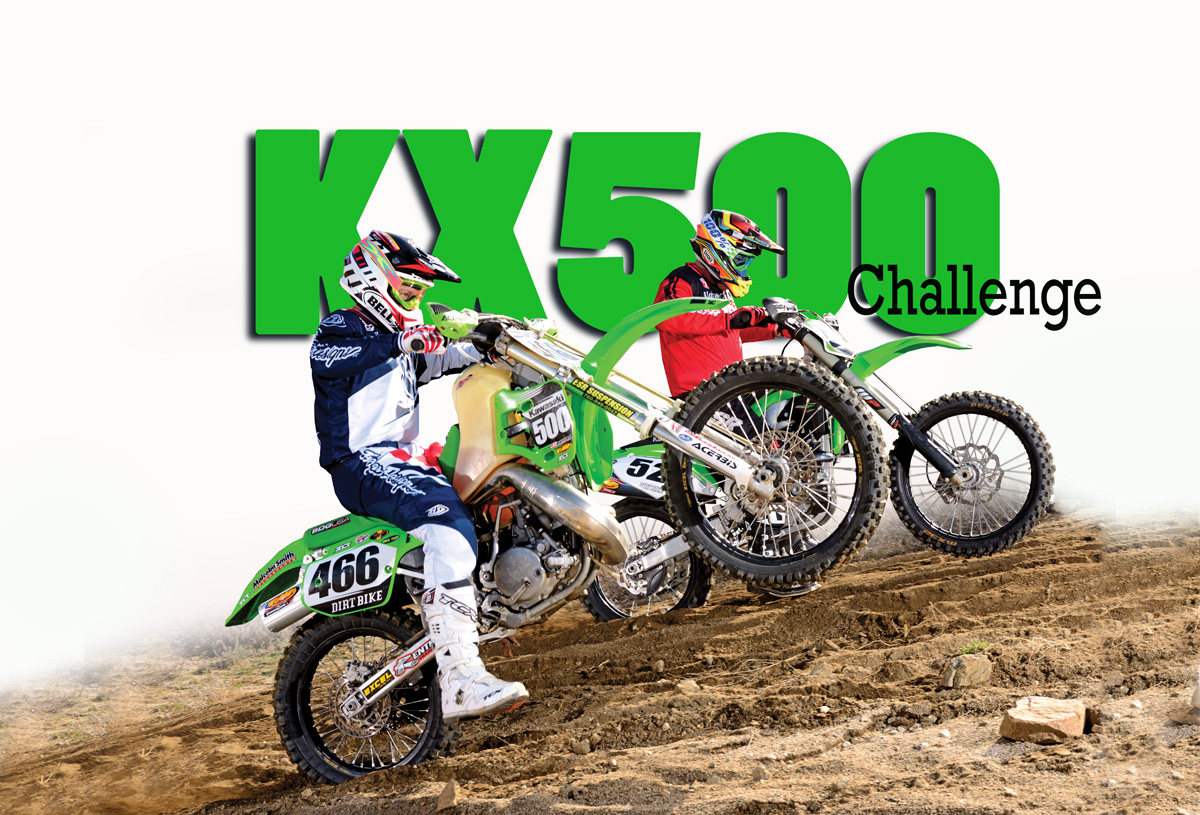 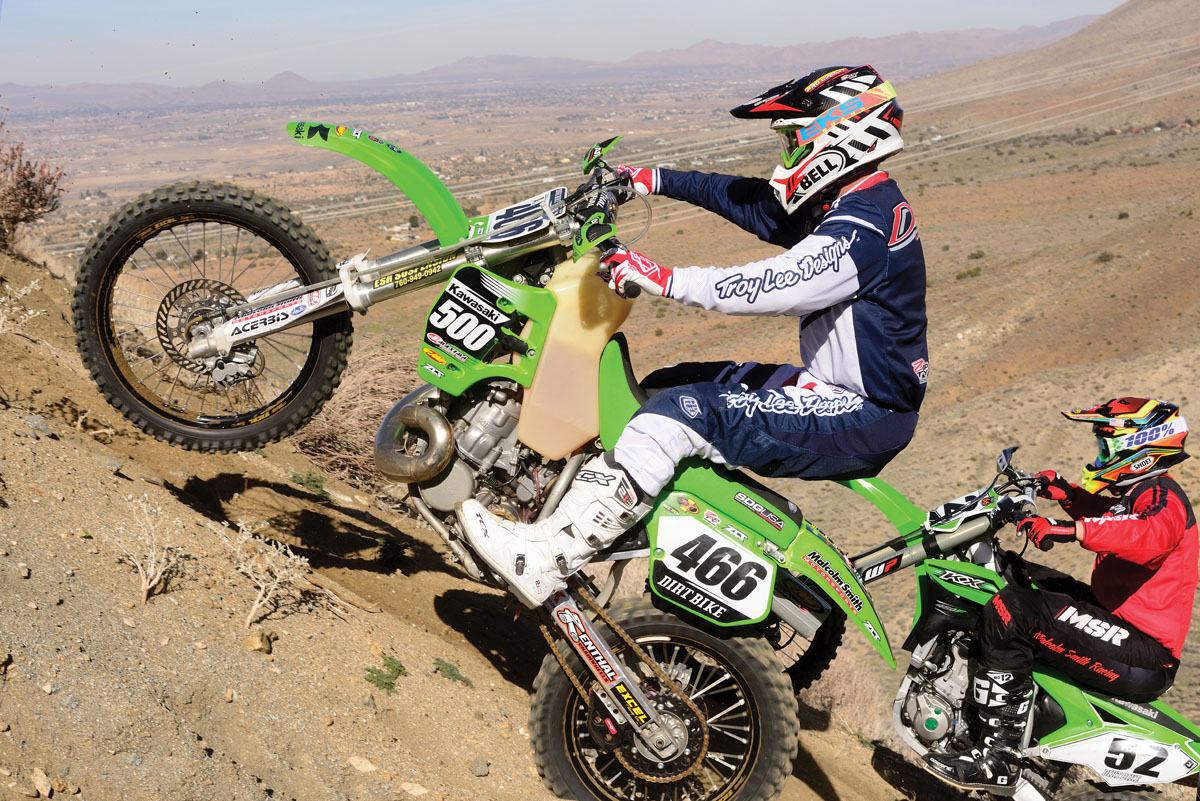 Sometimes, it’s best not to revisit the past. Face it; the house you grew up in was a tiny dump, your first love had pimples, and your all-time favorite motorcycle probably was a roach.
But, it’s not always like that. The Kawasaki KX500 has been called the most powerful dirt bike of all time, and a new one hasn’t been built since 2004. Whether or not the big KX really is the all-time horsepower king is debatable but irrelevant. In legend, the bike has grown to mythical proportions. It has also become a martyred symbol of the demise of the two-stroke. Today, the KX holds a revered place in moto culture and is being given the respect that it should have had 15 years ago.
We decided it was time to revisit the KX500; to ride it, test it and examine it to separate fact from fiction. It’s risky to mess with icons, but if we treated the Kawasaki with respect, we were sure it wouldn’t disappoint us. 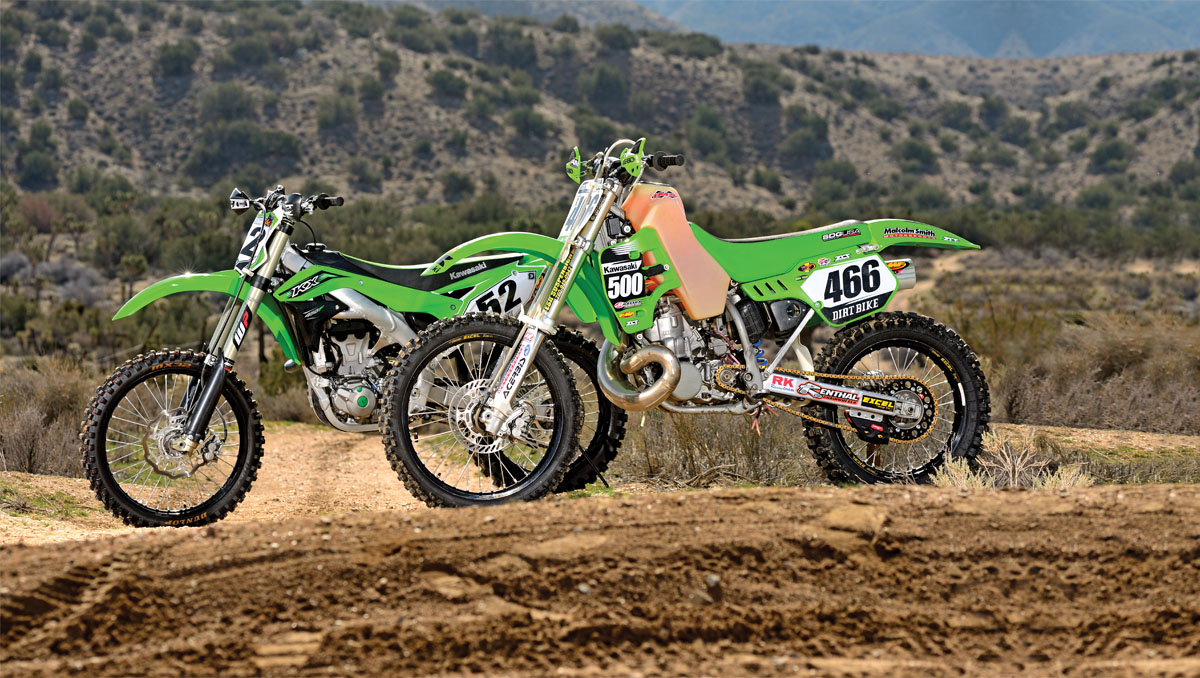 IN OUR LAST EPISODE…
A little over a year ago we took our first KX500 challenge. Veteran District 37 racer Paul Krause asserted that no bike could beat the big KX two-stroke in a classic desert bomb run. Nothing today would start as quickly, launch as hard or go as fast through a straight section of desert. We put his claim to the test with a stopwatch and GPS and found he was partially correct. The KX would, indeed, launch from a dead-engine start faster than a modern KTM 450XC four-stroke, but on longer runs, the more modern chassis of the KTM allowed it to catch and pass the 500. To read the story of the KX500 versus the KTM 450, click here.
Now, we had a different challenge in mind. We wanted to find out which one was the best hillclimber. We weren’t talking about extended-wheelbase, nitro-burning competition hillclimbers—those bikes aren’t typical of real-world riding. We wanted to take the KX on a regular trail ride among friends that would be highlighted by some monster hill. You know the routine; you and your buddies gather at the bottom of something scary and steep and take turns setting the high mark.
To represent modern era four-strokes, we chose a Kawasaki KX450F. It wasn’t a current model, but it was new enough for our purposes. For our KX500, we had the perfect candidate. Brandon Krause, son to Paul, began building a 500 right after our last challenge. He’s too young to actually remember the heyday of two-strokes, but he likes horsepower. Who doesn’t? And for our hill-climbing guinea pig, we enlisted Ty Davis, a veteran of both eras. In 1997 and 1998, Ty won National Hare and Hound championships on the KX500; in 2002 he won on a Yamaha four-stroke.

THE KX CHRONICLES
For a history of the KX500, click here. Krause’s KX500 was a 1995 model. The year isn’t that important. The Kawasaki 500 was almost unchanged from 1988 to 2004. There were changes to the suspension and ignition along the way, but when you’re dealing with a 20-year-old motorcycle, it’s all about condition. This particular one was cherry. Still, at the risk of tainting the KX’s reputation, it’s important to note that no one ever rode one in stock form. The KXs were powerful, but they were never known to be easy to ride or reliable. It took a lot of work to win all those desert races. At Team Green in the good old days, John Braasch was the man who assembled many of the bikes that riders like Ty Davis, Paul Krause, Larry Roeseler and Danny Hamel used to win their championships. Braasch went through Brandon’s motor piece by piece to prepare it for the 2015 24 Hours of Glen Helen. That’s a much more difficult task today than it was in 1995. In the shop at Kawasaki, there was an endless supply of new parts available. A motor never went together with old bearings or with any rounded gears. That’s not possible today, since many parts have been discontinued. He found a brand-new OE crankshaft, but some of the other parts had to be reused. Many plastic parts aren’t available from Kawasaki, and Braasch doesn’t believe in using aftermarket stuff.
A good parts man can often find items that Kawasaki doesn’t offer anymore. Dealers have a network that allows them to share information on old inventory, so Braasch eventually came up with everything he needed to get the bike back together. Some aftermarket parts made the cut. The pipe and silencer came from FMF. The steering damper came from Scott’s. The tank and pegs were IMS. The chainguide was from BRP, and the seat was from SDG.
The suspension was never raced in stock form back in the day. Earl Schuler at ESR re-valved Brandon’s fork and shock but ran into an interesting problem. No one makes heavy fork springs for that particular KYB fork anymore. The original springs had to be cut and shimmed to arrive at the right spring rate for Brandon.

HILLCLIMB CHALLENGE
We have to confess here. There was nothing scientific about our hillclimb challenge. We went riding with Ty and Brandon, found a big hill, and spent a few hours goofing off and having a blast. Big hills, big bikes, lots of power. Does it get any better than that?
Ty Davis was impressed with Brandon’s KX500. “Usually, old bikes are rattly and annoying to ride. This one’s pretty tight!” Ty is probably less romantic about the KX500 than most riders his age. He knows the bike too well after using it to win so many races over a long career. “Even a good KX500 would vibrate badly,” he remembers. “And the chassis was kind of outdated 15 years ago. It was fast, but the layout was old-school, with really low bars, and that feels a little awkward today.”
The hill that we chose for the challenge was a typical desert hill—long, steep and sandy. It was moderately technical. Even though it was relatively straight, the traction and soil were inconsistent. To get to the top, a rider had to soak up bumps at the bottom and build up a lot of speed quickly. Then it was a matter of working the traction without letting the front end get light. Both bikes were able to get into third gear by the time they got to the steepest part. First, Ty tried the KX500. “It felt really light,” he reported. “I was able to use subtle body English and move around to keep the front end where I needed it.” On his very first run, Ty let the bike drop off the powerband and didn’t downshift quickly enough. The bike dug in and was barely able to make the crest. Next try he got it right. “I had to use the clutch just right,” he said. “I couldn’t let the revs drop too low, and I saved my downshift for the last minute.” Ty’s best time on the KX500 from launch to the top was 18.6 seconds.
His very first try on the KX450F was solid. “The KX was easier to ride. It seemed like I just sat on it and pointed it up the hill. But, it felt heavier. I think it wouldn’t respond to changes in body position as well as the KX500.” The biggest difference between the two was a bit surprising to all of us. “The KX450F actually felt more powerful,” he said. “There’s a tiny zone where the 500 makes more power than the 450, but it was too hard to keep it there. Even though I used the clutch more on the 500, I couldn’t keep it in the powerband. On the 450, I barely had to use the clutch at all.” It was still a very close contest. In the end Ty’s best time on the 450 was 17.8 seconds; just a little faster than the 500’s best time.
This isn’t over yet. Had we chosen a more technical hill, there’s a chance that the 500’s maneuverability would have given it the edge. On the other hand, the 450’s broader powerband might extend its advantage on other hills. The only answer is to go back again and again and keep the KX500 challenge alive.
Being the guardian of a legend isn’t an easy job, but we’re up to it.