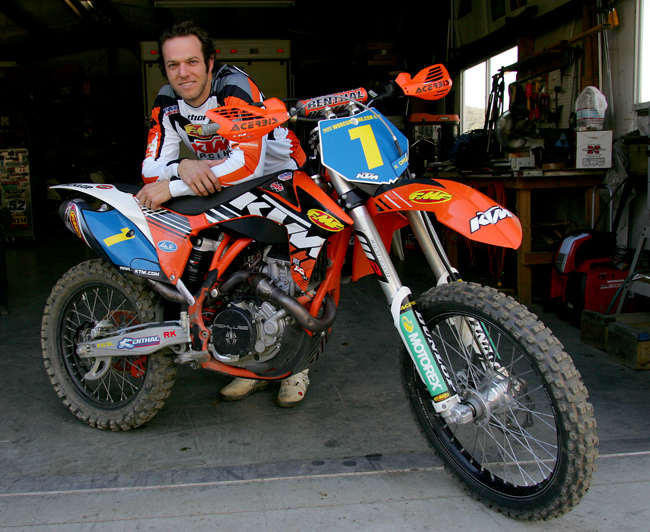 You won the 2010 WORCS Championship, what is in store for 2011?
“I grew up racing desert, and when the WORCS series started 10 years ago, everything kind of went that way because of the exposure and manufacturers backing the series a lot more than desert racing. It was somewhat my idea and KTMs to hire me to race the 2011 National Hare and Hound series. I’m looking forward to that; I haven’t raced a true off-road series in quite some time. The WORCS series started off as a mixture of moto and off-road, and it has slowly gone towards the moto side, so getting back in the desert and racing more off-road is something I’m looking forward to.
“KTM has been backing me for a long time. 2011 will mark my 10th year riding an orange machine. This coming year is going to be good, and I’m excited. I’m going to race the Hare and Hound series, the WORCS series and I’m very interested in doing the Baja events. I feel like in the next five years, Baja is probably going to be one of the biggest known off-road series in all of motorcycle racing. I feel there is a lot more money to be made down there, with outside sponsors and interest in the racing growing, it’s only going to get bigger and better. Ten years ago when the WORCS series started, a lot of people were talking about how off-road and desert racing was a dying breed, but it’s not at all. The following in the National Hare and Hound series is as big as it was 10 years ago. There are still a lot of enthusiastic racers out there, and the camaraderie between off-road racers is awesome. The off-road scene is very laid back and fun.
“I’m looking forward to Baja and know there is a lot I have to learn down there. Experience is everything with Baja racing, and I just need to get down there and start riding and racing. So for 2011, the National Hare and Hounds are at the top of my list, then the WORCS series, and also Baja.”

What do you think of the new format of the WORCS series, which is an hour plus one lap on both Saturday and Sunday?
“The new format will be good and bad. For me, it’s not as good because I do better in longer races. At an hour, I’m just starting to feel good and warm up. I’m going to have to change my game plan and train a little different. If that were the only series I was doing, I’d be bummed and wouldn’t feel like I got enough out of the weekend. Racing back-to-back days is tough, but when the race is only an hour, it’s not that bad. As racers, we basically do that every day of the week [type of] training. The Hare and Hounds are tough. Tey are still up to three hours long—sometimes longer—and 100 miles. With the schedule I’m doing, I’ve got quite a big load to take care off and looking forward to it.”

How did the Six Days go for you this year in Mexico?
“ISDE wasn’t my best finish this year. It was different, and we had a good time. The race was pretty tough, the tests were slick and I was riding a 250F, so I had to play with some stuff during the week. I ended up fourth in my class and 10th overall, which wasn’t where I wanted to be, but still decent, and top American. It was my ninth Six Days and seventh top- American finish. Next year the Six Days will be in Finland, earlier in the year, in August, so we have to start planning soon. It will be sandier and suits my style, so I’m looking forward to that.”

Will you be racing the KTM 350 at all?
“Yeah, we are going to race a few WORCS races on the 350, Washougal and Havasu—possibly some others. I’m looking forward to that, I think the bike is really good, and it’s proved it has the power to hang with the 450s. Next year will be cool to see it in supercrosss, moto and off-road.”