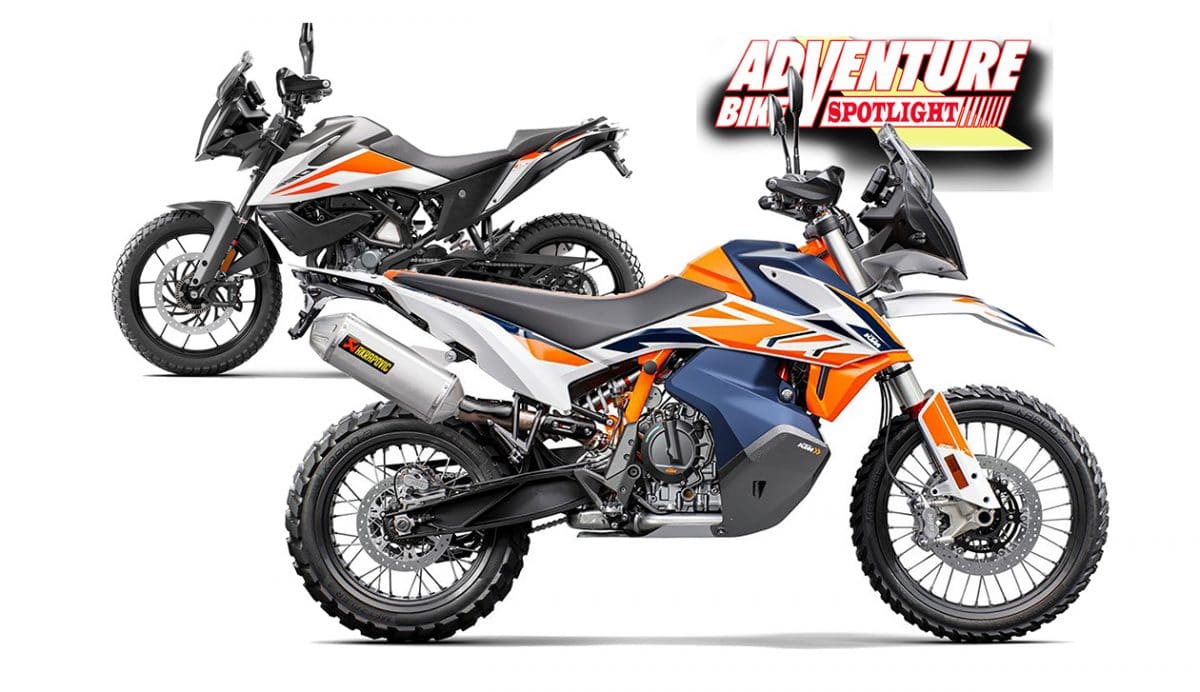 The EICMA show in Milan, Italy is underway and KTM has taken the opportunity to expand its adventure bike offerings in the U.S. A new 390 Adventure has been added to the line, based on the motor from the 390 Duke. And the 790 Adventure R has been focused a little more tightly on off-road to create the 790 Adventure R Rally.  Excerpts from KTM’s official announcement appear below.

The new KTM 390 ADVENTURE has harnessed the attributes and DNA from the incredibly capable and highly versatile KTM 790 ADVENTURE as well as the R&D information gathered from nearly two decades of Dakar Rally success. A light, agile, and ideal entry model for riders looking to discover the world adventure riding, this motorcycle offers added versatility for touring and light offroading.Using elements of the KTM 390 DUKE as a base and taking performance cues found at the heart of the KTM 450 RALLY, the KTM 390 ADVENTURE offers offroad performance but with impressive road manners as part of the package.

KTM North America proudly announces that the KTM 790 ADVENTURE R RALLY will come to North America for 2020. Restricted to just 500 units worldwide, it will be available in extremely limited numbers. It is the third and newest member of the KTM 790 ADVENTURE family and is positioned as the most travel capable rally bike. For those riders who demand the most hardcore performance and the very best suspension equipment available, this is the machine that will easily cross continents in order to ride to the start line of a rally.

Based heavily on the KTM 790 ADVENTURE R, the exclusive RALLY model retains the same steel trellis chassis, the potent and compact LC8c parallel twin engine and the class-leading electronic rider aids. The major component difference is the addition of the special WP XPLOR PRO suspension. Developed in the same department as WP’s Factory Racing equipment, it offers superior performance for extreme riding. An additional 30 mm of suspension travel front and back helps clear the most awkward obstacles and brings the seat height to 35.8 in (910 mm).

KTM presented an even sharper “Scalpel” for 2020 with updates to the color and graphics of the KTM 790 DUKE. With the agility you’d expect from a single, blended with the meaty punch of a twin, it carves corners with pinpoint precision, boasting the 799 cc LC8c parallel twin motor nestled into one of the lightest and most compact chassis around. The super agile KTM RC 390 also received updated looks for 2020, bringing an ultra-modern look to this pure sports bike.

KTM welcomes a ninth consecutive year of growth and another sales record in 2019, while continuing to pursue an even greater global market share and further consolidation as Europe’s leading manufacturer. KTM will also be seeking to build on the strengths of their dealer network and international strategic partnerships.

After a grand opening this summer, the work, innovation and history of the brand is now fabulously displayed in a visual and interactive manner at KTM’s new Motohall, located in Mattighofen, Austria. Mr. Trunkenpolz, together with KTM Motorsport Director Pit Beirer, also took time to reference the impact and importance of MotoGP™ and the firm’s presence at the elite level of racing as the conclusion of a third season in Grand Prix draws near.

There was considerable interest in a number of other motorcycles, especially the new KTM SX-E 5; an adjustable and versatile junior electric bike that has the potential to introduce a vast fresh generation to the buzz of riding.