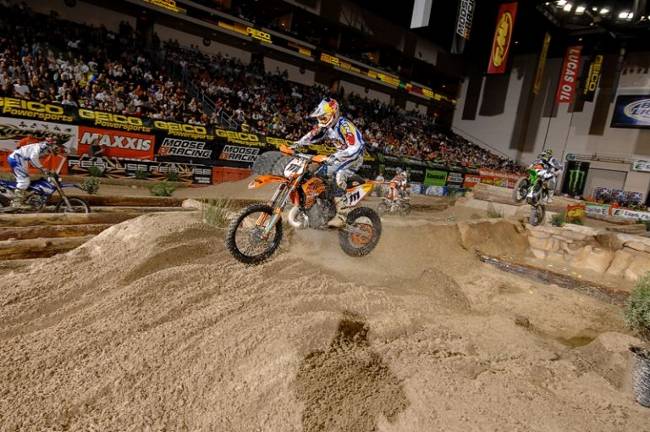 ANAHEIM, Calif. (Aug. 12, 2009) – “You had to be there” pretty much sums it up when off-roaders and dirt bike fans in general discuss the opening round of this year’s GEICO Powersports AMA EnduroCross, presented by E3 Spark Plugs, late last month at Vegas’ Orleans Arena.

In one of the most exciting races in off-road history, and certainly a battle by which all others in the relatively young sport of EnduroCross will be measured, KTM’s Taddy Blazusiak beat defending EnduroCross champ Ricky Dietrich (Monster/Kawasaki) over the giant tires finish line in a photo finish that, depending on where you were sitting in Vegas’ Orleans Arena, could have gone either way.

Though a few weeks have now past and the second round of GEICO EnduroCross is upon us (Guthrie, Okla.’s Lazy E Arena this Saturday), the off-road industry is still buzzing over the EnduroCross battle that went down at the Orleans on July 25th.

Rather than try an paint a picture of the event, one with all the flashy adjectives and keen superlatives imaginable in an attempt to do the Blazusiak/Dietrich battle justice, take a minute and check it out for yourself. Then come back and read what Taddy and Ricky had to say on this most memorable GEICO EnduroCross race.

GEICO EnduroCross: Guys, that race was insane. Everybody we talk to is still buzzing over it. Have you guys had a chance to watch the race online?

Dietrich: “Yes I have. There are a couple vids I saw.”

GEICO EnduroCross: What were your overall thoughts?

Blazusiak: “It was a very exciting race to watch, but waaayy harder for us racers to race!”

Dietrich: “The race was awesome, hands down. It was a great course, which made for even better racing. Wish I would have won the battle, but there will be five more to come – beginning this weekend in Guthrie!”

GEICO EnduroCross: Taddy, the lead changed hands a bit, then you got out front and were looking good – only to go down in the Moose Racing water hole. What happened there?

Blazusiak: “I lost concentration for a split second checking out the gap on Ricky and I missed the timing on the jump.”

GEICO EnduroCross: Ricky, things got crazy early. What were you thinking when you saw Taddy go down in the water?

Dietrich: “I was thinking I finally got my break (laughter)! But that was not the case and he got up quickly and the battle continued.”

GEICO EnduroCross: Taddy, your KTM’s partially submerged, you’re soaked from head-to-toe – did you think it was all over at that point?

Blazusiak: “I never think that it’s over before the checkered flag. When I go down I try to get back on the bike and try to fight back.”

GEICO EnduroCross: Ricky, you were able to get past Taddy momentarily when he crashed. What happened after that?

Dietrich: “Right after I got by we came together into a corner with a log and I took him wide since I had the inside. I dunno why I tipped over in the corner, but we were like all piled on top of each other at that point. I stalled my bike and took like five kicks to get ‘er fired.”

GEICO EnduroCross: Taddy, that move you pulled in the sand, the skateboard-like kick turn to get around Ricky, was insane. Have you ever had to pull a move like that in a race before?

Blazusiak: “No, it was the first time I did it. It just came to me.” (Check out Blazusiak’s water crash and the ensuring move to get past Dietrich at the 10:23 mark of the video.)

GEICO EnduroCross: Ricky, the lead changed hands a couple times between Mike Brown, Colton Haaker, Taddy and you – then you were able to get the lead back and were running well, gapping the field even, when you ran into some difficulty on the Lucas Oil Angle Log across the corner at the end of the start straight. Do you think you’d have won had that accident not occurred?

Dietrich: “Yeah, at that point I thought I had it wrapped up. And then one of the easiest obstacles on the track took me out. I was bummed and I felt like a real beginner right there. Thought I blew it. But it true EnduroCross fashion he (Blazusiak) made a mistake and I was able to close the gap quite quickly.” (Dietrich’s log crash is at the 11:57 mark.)

GEICO EnduroCross: Taddy, you’d run into trouble on Monster Energy Boulder Mountain and gave up the lead, but came charging back. What went through your mind when you saw Dietrich throw it away over that Lucas Oil Angle Log?

Blazusiak: “After crashing in the pool I used a lot of energy and for sure wasn’t breathing as I should. And after that I made a few mistakes because of being tired. When I saw Ricky crash on that log I just thought to try and stay calm and ride my own race.”

GEICO EnduroCross: Ricky, once you got up you went ballistic trying to catch Taddy. He sketched a bit again on the Monster Energy Boulder Mountain and you were gaining on him rapidly. Everyone in the Orleans was on their feet and going bananas. Could you sense the crowd?

Dietrich: “Yeah, for sure. I wanted to win bad and I had the crowd behind me cheering me on. I didn’t care at that point if I crashed – I was going for it and, when the crowd is on their feet screaming it was a really great feeling. I was all in at that point.”

GEICO EnduroCross: Taddy, you finally cleared the Monster Energy Boulder Mountain and were on the last straight-away. Could you sense Dietrich was on your tail at that point?

Blazusiak: “Yes, I could hear him coming.”

GEICO EnduroCross: The finish was insane. Take us through that.

Blazusiak: “Pin it! And somehow get to the finish line.”

Dietrich: “Taddy went up and over the two big logs when I took the high line across the (elevated) middle log. After I dropped off that I was right behind him. Grabbed a handful of throttle and basically wheelied the last scattered timber section. I didn’t care if I crashed at that point. I was going to crash through the finish line and hopefully win.” (Check out this insane finish at the 12:05 mark of the video.)

GEICO EnduroCross: Craziest race you guys have ever been in?

Blazusiak: “Yes. And the closest one, too.”

Dietrich: “One of the top three for sure! I will remember this race for a long time.”
Next up on the GEICO EnduroCross series opener is the Guthrie, Okla., round at the Lazy E Arena, Aug. 15th, the opening round of the $50,000 GEICO Triple Crown of EnduroCross!
EnduroCross tracks incorporate various elements of off road racing into a supercross-style setting, including rocks, boulders, logs, sand, mud, a water-hole… and even a few special obstacles like giant tires thrown in!  Known as the “toughest racing on two wheels,” this indoor version of extreme off road racing will certainly keep you on your feet. The GEICO Powersports AMA EnduroCross series, presented by E3 Spark Plugs, will be captured by the Versus Network, to be aired on the popular grassroots racing program; The Lucas Motorsports Hour. With its excitement and unpredictability, the EnduroCross championship has always down to the wire and this year will be no different as the series starts and finishes at Vegas’ Orleans Arena! Don’t miss your chance to see GEICO Powersports AMA Endurocross “Live” – and be sure to log-on to www.Versus.com for local airing dates/times for the Lucas Motorsports Hour.