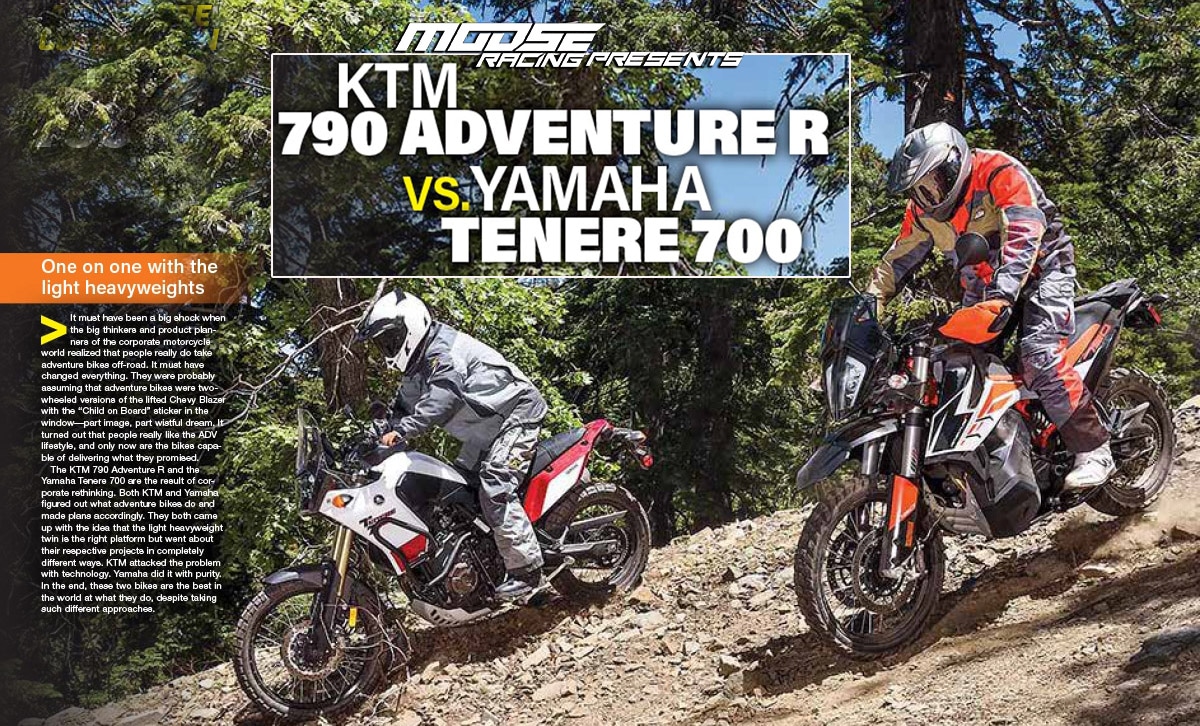 The KTM 790 Adventure R and the Yamaha Tenere 700 are the result of corporate rethinking. Both KTM and Yamaha figured out what adventure bikes do and made plans accordingly. They both came up with the idea that the light heavyweight twin is the right platform but went about their respective projects in completely different ways. KTM attacked the problem with technology. Yamaha did it with purity. In the end, these two bikes are the best in the world at what they do, despite taking such different approaches.

The KTM 790 Adventure R is the more dirt-oriented of two versions offered by KTM. It has been on the market for over a year and has been completely embraced by the adventure bike community. The 790 has far more dirt capability than any of the ADV bikes that preceded it, yet it gives away almost nothing to the big road burners. KTM didn’t start from scratch, though. The 799cc parallel-twin motor started life in the 790 Duke street bike. It was re-tuned and wrapped in an all-new chassis with a WP Xplor fork, a no-linkage rear shock, and a 21-inch-spoked front wheel with an 18-incher in the rear. The tires are Metzeler Karoo 3 tubeless, which are fairly aggressive off-road tires.

The most off-beat design aspect of the 790 is its fuel cell. It has a conventional filler on top, but most of the 5.3-gallon fuel capacity is carried down low, around the skid plate in an oddly shaped, double-sided plastic cell. It’s all about keeping the center of gravity low. Naturally, everyone’s first thought is about potential punctures. We haven’t heard of that happening yet, although it’s still a legitimate concern.

As with many modern adventure bikes, the 790 has an extensive electronic portfolio. Through a series of digital menus, KTM allows you to choose from three levels of throttle response and nine levels of traction control. You also have anti-lock braking and several other features, but the main attraction is traction control.

YAMAHA TENERE 700
A mid-sized adventure bike from Yamaha was long overdue. If you check back, Yamaha was in this game back in the late ’80s, long before most other manufacturers. Like KTM, Yamaha started with an existing motor; this one from the MT07 naked bike. They are both 270-degree parallel twins, but the Yamaha’s is a full 110cc smaller in displacement than the KTM’s.

From the outset, it’s clear that Yamaha engineers had a different set of priorities with this bike. The biggest barrier in the adventure bike world, they decided, isn’t technology; it’s price. Most riders think long and hard about taking a $15,000 to $25,000 motorcycle into a giant mud bog. Yamaha set out to make a bike that offered performance at the top of the class with a price near the bottom. They were pretty successful; the Yamaha T7 has an MSRP of $9999. That’s $3700 less than the KTM. For that matter, it’s $1200 less than a KTM 350EXC dual-sport bike. In order to do that, Yamaha decided to forgo the electronic features that you usually see in this type of bike. There’s no traction control, ride modes, hill-hold, wheelie control or electronic suspension settings. The only thing left is anti-lock braking, which you can disable with the push of a button.

The Yamaha has KYB suspension with linkage in the rear. It has 8.3 inches of travel in front and 7.9 inches in the rear, as opposed to the KTM’s 9.5 inches at each end. The Tenere also has 18- and 21-inch spoked wheels with fairly aggressive Pirelli Rally tires, but in this case they are not tubeless. Another concession to price is the black-and-white LED instrument display as opposed to the color one on the KTM. The Yamaha’s fuel capacity is significantly smaller at 4.2 gallons.

LET’S TALK POWER
The KTM obviously has a big advantage in displacement, and that translates into considerably more power. It isn’t, however, better power for off-road riding. The Yamaha is freakishly smooth and tractable. You can put it in a tall gear, drag it down to idle-speed rpm and open the throttle as unskillfully as you like. The Yamaha pulls well and seems to find traction. It quickly gets into the meat of the power, and if it starts to get a little loose, you can always shift up early. The Yamaha likes to be ridden in a tall gear. Overall gearing is also much lower on the Yamaha than on the KTM, meaning the two bikes are often using completely different gears in the same situation.

Riding the KTM in the dirt is a very different experience. It has so much more power that it truly needs some electronic intervention. If you select maximum throttle response and zero traction control, you better hold on and think quickly. The KTM can be a wild ride. It’s definitely fun in that mode, but there’s so much wheelspin that the bike isn’t especially effective. The three levels of throttle response are helpful in dealing with this, but the KTM’s traction-control system is what makes all the difference. It is far more advanced than any of the other systems on the market. Whereas Hondas and BMWs intervene in an obvious and intrusive manner, you don’t really notice what the KTM is doing. In levels zero through four, you simply think the traction is better. Above that, you start to get an inkling that the bike’s electronic brain is stepping in, but it never creates a drastic stumble or bog. By selecting the middle throttle-response and traction-control settings, you can effectively arrive at a Yamaha-like feel, although the 790 will still rev higher and make more power on top.

TALL FACTOR
If you were to measure the handlebar/seat/footpeg relationship of these two bikes, they aren’t that different. The Yamaha’s saddle height is slightly lower, but it gives you the impression that it’s a much taller motorcycle. Most of that notion comes from the Tenere’s massive fuel tank. It rises steeply from the seat junction, whereas the KTM is much more flat across the top like a true dirt bike. The Yamaha’s tank also locks you into place when you’re seated, making it difficult to properly weight the front wheel in a turn. It forces you to stand, and a tightish seat/footpeg relationship makes that motion difficult. The KTM also turns and handles better when the rider is standing, but you can get away with being seated a little longer, and when you finally get your butt out of the saddle, it’s a little easier because of a looser peg/seat relationship. 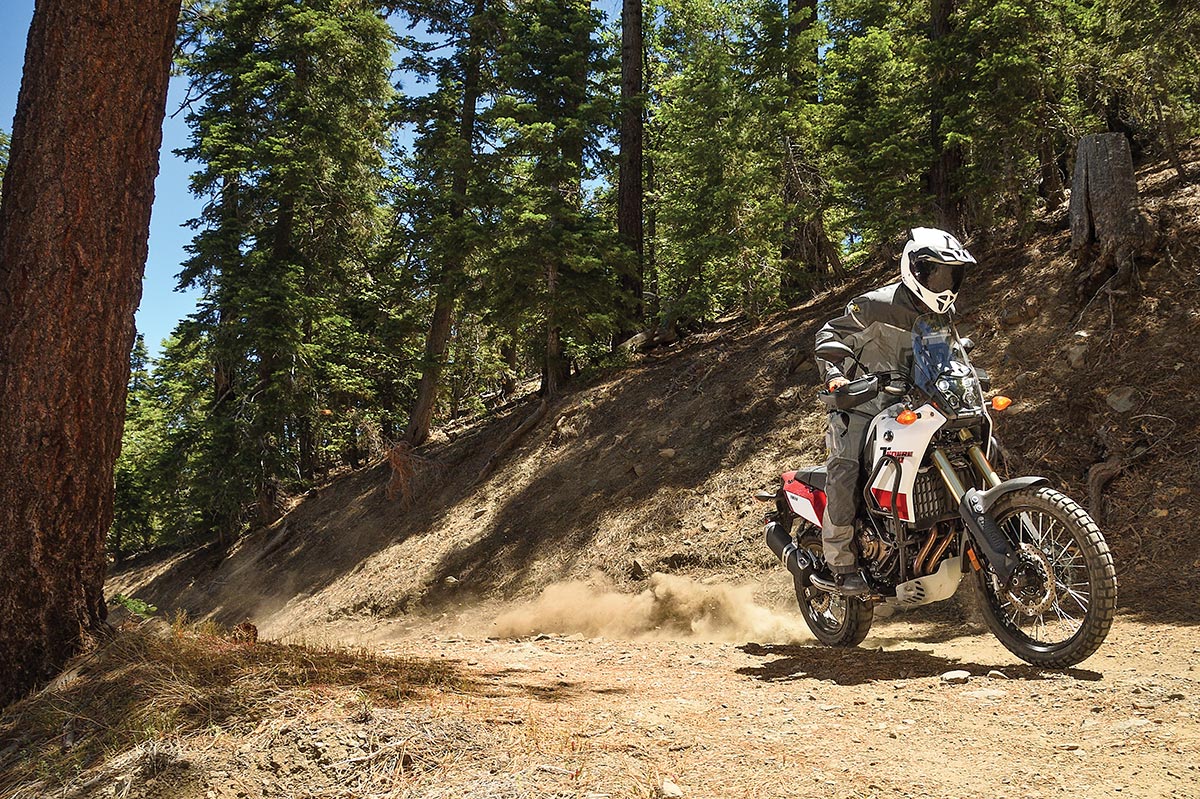 That brings up another dramatic difference between the two bikes. Even though they aren’t that different in dry weight (the Tenere is approximately 20 pounds heavier), the Yamaha is a much more top-heavy machine. Part of this is because of where the fuel is carried, and part is because the engine is taller and has its crankshaft mounted higher in the chassis. Even with the standard seat, the Yamaha is awkward to manhandle at lower speeds. The KTM, on the other hand, is much easier to manage when you get into those first-gear situations where it’s a challenge to keep any bike upright. Once again, the KTM feels more like a dirt bike.

As speeds increase, that difference isn’t a big deal. The Yamaha’s higher center of gravity actually makes it a little more stable at speed. Both bikes are well-planted and have very good suspension. There’s no way that any motorcycle can be all things for all purposes, but KTM and Yamaha found good dirt/street compromises with the stock settings. On a smooth dirt road, they’re both cushy and comfortable. The occasional washout can present a problem, though. Street settings make for a great deal of fork dive, and both bikes will bottom harshly. In general, it takes a little more to make the KTM use up all its travel. That’s why it’s a good idea to bump up the suspension settings before you go into the dirt. Yamaha makes this pretty easy; there’s a big knob on the rear shock that you can twist by hand to increase preload. The KTM requires an Allen wrench, but even that is easier than using a hammer and a punch as with a conventional dirt bike.

STREET TIME
On the road, both bikes are smooth, comfortable and fun. They don’t shake or buzz, but they do rumble. That’s no problem, even on long road rides; in fact, it’s kind of comforting.

If you’re a canyon racer, the KTM can play the part a little more effectively than the Yamaha, simply because it revs out and makes more power. In everyday riding, though, the Yamaha is more pleasant. It has a smoother, less lurchy power delivery. You just roll on the throttle and the Tenere responds with creamy, rich torque. The KTM, on the other hand, has more of an on-or-off power delivery down low. It also has more engine braking, making it a little more of an intense ride. Once again, you can dial down the throttle response to reduce this effect.

Both bikes have good wind protection and come with handguards and windscreens. The Yamaha’s screen is considerably taller, which can be good or bad, depending on how tall you are; some riders end up with their head in the buffeting air zone right at the top. Overall, though, they are both excellent places to sit and watch the states roll by.

The fact that we now have two outrageously capable bikes to populate the under-800cc class is an embarrassment of riches. Both of these bikes were designed with off-road riding in mind and represent a huge step forward in the world of middleweight adventure bikes. They are, however, very different machines. The Yamaha was built to come in with as much performance as possible at a specific price point. The 700 Tenere is wildly successful given that restriction. The less-restrained KTM offers more technology, and, best of all, that technology is effective and useful. That’s why most riders agree that if they could afford the KTM, it would be their choice. In the end, these are two very different motorcycles, but they will carry you to the same destination. Hopefully, more will follow.

LIVING WITH THE HUSKY FE450 DUAL-SPORT