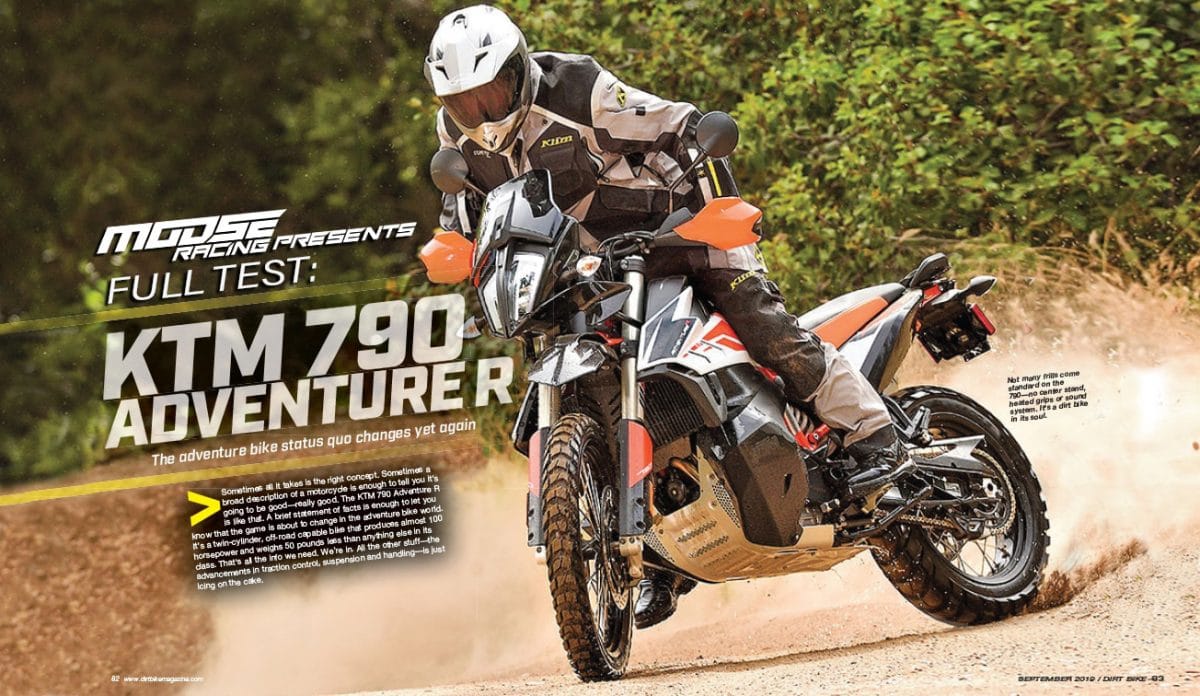 The KTM 790 Adventure R is one of those rare motorcycles that will will have a lasting effect on the the sport, the riders and the other bikes in its category. It’s a twin-cylinder, off-road capable bike that produces almost 100 horsepower and weighs 50 pounds less than anything else in its class. That’s all the info we need. We’re in. All the other stuff—the advancements in traction control, suspension and handling—is just icing on the cake.

GENESIS OF ADVENTURE
A few years ago the expectations for adventure bikes were modest. If a big twin-cylinder street bike didn’t fall to pieces as soon as it hit the dirt, that was enough. No one in his right mind would attempt to ride one all day on dirty, rough two-trackers. And absolutely no one would attempt to do it fast.
That’s changed. The new KTM 790 arrives in an era when adventure riders want more than image. The idea behind this bike was to push the bar for off-road performance higher. Power alone isn’t enough anymore, and that’s where a smaller displacement can present an advantage. To make its first middleweight adventure bike, KTM started with the 799cc parallel-twin motor from the 790 Duke street bike, changed the power delivery, and then put it in a new chassis. The most unusual engineering aspect of the 790 is where it carries its fuel. The gas filler is on top, as on any conventional bike, but the fuel cell is shaped like a long pair of waders with big balloon feet. Most of the 5-gallon capacity is held down at the bottom around the skid plate. Much of the development for this bike was done in the U.S. with Quinn Cody. He said that there was some internal indecision about carrying the fuel down there at first, and that he did everything he could to puncture the tank in testing. He never succeeded, even though the cell is rather wide at the bottom and takes a fair amount of abuse from rocks.

The real innovation in this bike is in traction control. It has by far the most advanced and effective system yet devised. As with most modern adventure bikes, there are ride modes that you select. On the KTM, each of the four modes—Street, Rain, Off-road and Rally—alters throttle response, power output, ABS and what KTM calls “slip control.” As of now, suspension isn’t included in the electronic menu. The fork and shock on the R version have normal clickers for that. When you put the bike in Rally mode, it pre-selects various settings. Rear-wheel ABS goes away (but remains on the front brake). The throttle response is changed and, contrary to what you might expect, slip control goes to a middle setting. You can tweak that up and down through 10 levels of intervention. You can also adjust the throttle response through several levels, but you have to go a little deeper into the menu to do that. There are more electronic goodies to be had on KTM’s option list. You can get cruise control as well as QuickShift, which allows no-clutch gear selection.
The suspension was clearly a priority on this bike. The most important difference between the standard 790 and the R model, which we test here, is upgraded suspension components. The R has an Xplor 48 coil-spring fork, which isn’t that different from the one on the EXC dual-sport bike, aside from the fact that it has 9.4 inches of travel. The standard version has slightly less travel and less adjustability. The R also has a taller seat than the standard model and a shorter windscreen.

GO ON, GO A LITTLE CRAZY
To get the obvious out of the way, yes, the 790 is fast. KTM tuned it for more torque than the motor in the Duke, but it’s still wicked fast on any surface, paved or not. Only those riders coming off a KTM 1290, a Ducati Multistrada or a BMW R1250GS will be unimpressed, but those bikes are all about excess. The 790 still pushes the boundaries of what’s practical and can hang with much larger machines like the Yamaha Super Tenere and the Honda Africa Twin. Where the 790 is a step ahead of those bikes is in traction control. In most cases, off-road riders are used to disabling this feature in the dirt. With the KTM, you learn to love it. With the slip number set to 1 (off), it seems like the wheel just lights up and you don’t go anywhere. Level 6 of 10 is about right for the average dirt road. It lets you slide the rear end around turns, and when you pin it in a straight line, you hook up. Intervention is invisible. The engine doesn’t miss or bog. The computer adjusts power output by closing the throttle slightly (among other means). That’s only possible with ride-by-wire; there’s no throttle cable. Even when you get stuck in the sand, the computer knows what’s going on and lets you spin the wheel the right amount. For deep sand, you still might want to go to a lower setting (3 or 4). For rocks, you might go up to 7 or 8.

You still have to ride the bike like a big adventure bike. The rider compartment is designed so that you have to stand up virtually all the time that you’re in the dirt. But the bike is much less intimidating than anything with this much power. KTM claims the peak output is 94 horsepower and the weight is 416 pounds, which seems about right. That’s roughly 60 pounds lighter than a Honda Africa Twin with similar horsepower. Having the fuel so low in the chassis makes the KTM feel lighter still, and that goes a long way towards making it handle well. The bike has more off-road-oriented suspension than any other adventure bike we’ve ridden. It’s still a bit of a compromise, though, as any dirt/street bike is. You shouldn’t have to make drastic changes unless you really plan on pounding whoops or loading the bike with cargo. Even though the suspension is fully adjustable, it’s still a little awkward to change any settings when you transition from the street to the dirt. For that, you really need at least an option for electronic suspension control.

NEW GAME
From the outset, the 790 was designed to set a new standard for off-road performance. KTM prides itself on being a dirt bike company first and foremost, and there was a certain amount of corporate ego at stake. The good news is that none of that dirt-going ability is much of a handicap on the street. The low center of gravity and fairly firm suspension pay off anywhere. The only complaint you might have on a long street ride is the hard seat. It is, essentially, a dirt bike saddle. Otherwise, the riding position is comfortable and the vibration level is fairly low. KTM chose to equip the R model with Metzeler Karoo tires, which are more street-oriented than you might expect on a bike like this, but they are very good on the pavement with great tread life, low noise and very little buzz. On road trips, we always got better than 50 mpg on our test bike, which gave it a safe 250-mile range.
We had high expectations for this bike before we ever sat on it. It sounded like the adventure bike we’d been waiting for. It turned out to be every bit as good as we expected, which kind of messes up the status quo. The Virginia City GP, for example, has an adventure bike class that’s open to any twin-cylinder motorcycle. That was okay in the past; there was equity among the top twins. Now, that’s all changed. The organizers might have to have a separate 790 class.
That’s what they call progress.