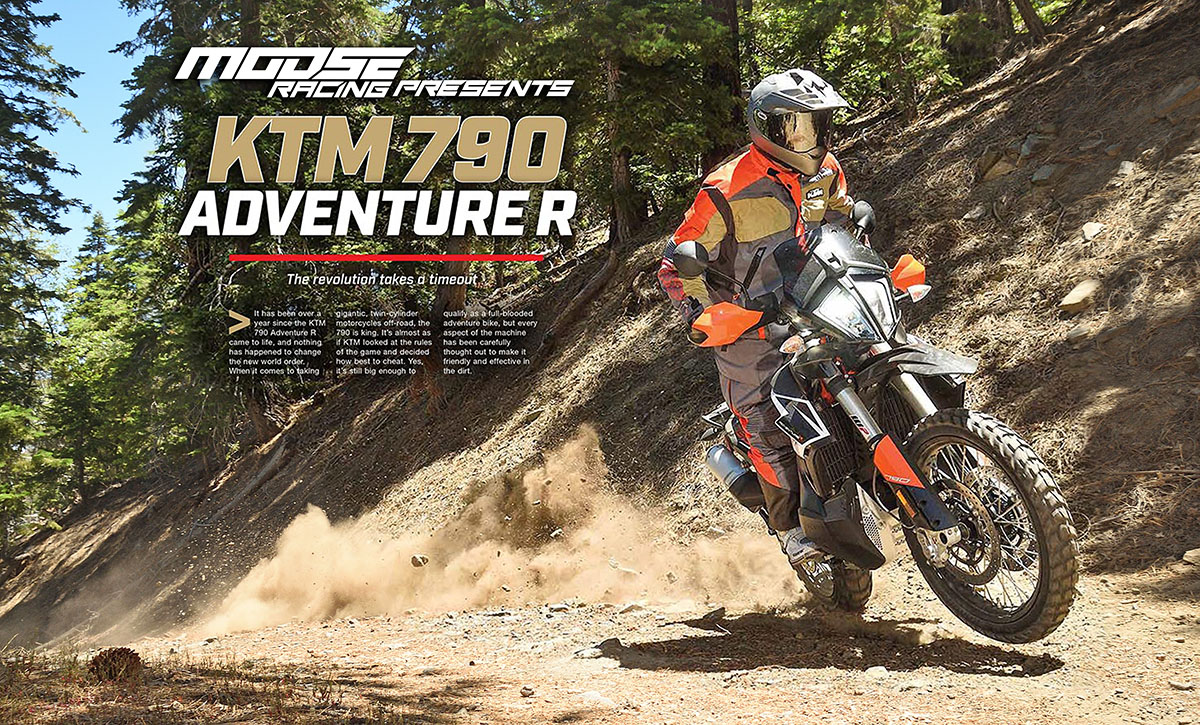 When it comes to taking gigantic, twin-cylinder motorcycles off-road, the KTM 790 Adventure R has been king since it was introduced a little over one year ago. It’s almost as if KTM looked at the rules of the game and decided how best to cheat. Yes, it’s still big enough to qualify as a full-blooded adventure bike, but every aspect of the machine has been carefully thought out to make it friendly and effective in the dirt.

BIG BIKE, BIG PICTURE
There are now several different versions of the KTM 790. They all have the 799cc parallel twin that was originally featured in the 790 Duke. There’s the standard 790 Adventure ($12,699), and then there’s the 790 Adventure R ($13,699), which is a little more dirt-oriented with upgraded suspension, more travel, more aggressive tires and a high fender. There’s also a limited-edition 790 R Rally ($19,499) that has works-level suspension and an Akrapovic exhaust. We’ve never actually seen one of those; there were only 500 imported. The version we have now is the 2020 version of the Adventure R. 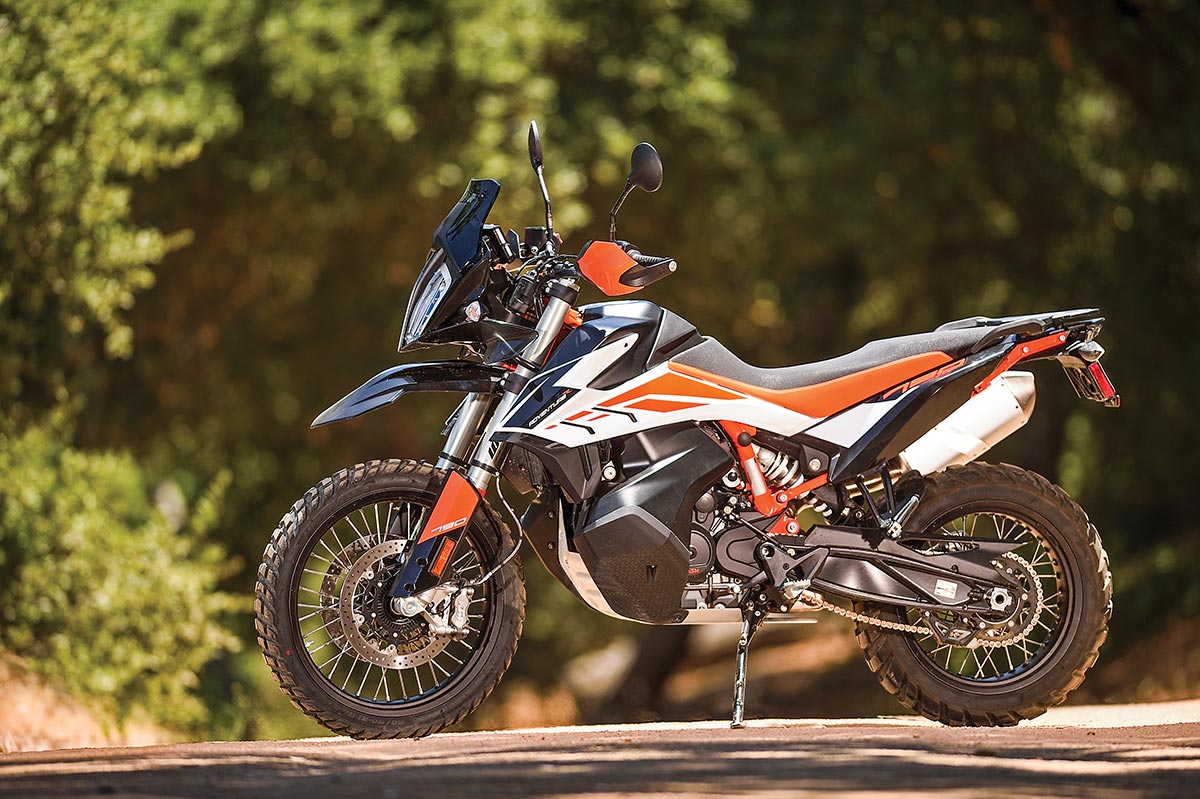 The aftermarket world has finally caught up with the KTM 790. You can customize it to be more of a street bike or more of a dirt bike; your choice.

In order to make the 790 Duke into an adventure bike, pretty much everything around the motor was completely redesigned. Then, just for good measure, even the motor was re-tuned. It’s still a 6-speed, but the motor is remapped for low- and midrange power. The adventure bike template requires a more upright riding position, tall bars, more suspension, slight wind protection and a portfolio of electronic riding aids. The 790 got all that. Where KTM excelled with this particular bike is that all of those items are quite simply better for off-road riding than anything else on the market.

At the top of the “Things We Love” list is the fact that the bike feels small and light by adventure bike standards. It weighs 419 without fuel, and even though that sounds like a lot, it’s 50 pounds lighter than an Africa Twin and around 15 pounds lighter than the new Yamaha Tenere 700. What really makes the 790 feel small and manageable is the fact that it has a low center of gravity. KTM did this with a compact motor and a truly strange fuel cell. Gas is carried down around both sides of the motor. Aside from making the bike feel lighter, it also has the benefit of not making you sit behind an enormous fuel tank, which typically pushes the rider too far rearward. It still carries 5.2 gallons. 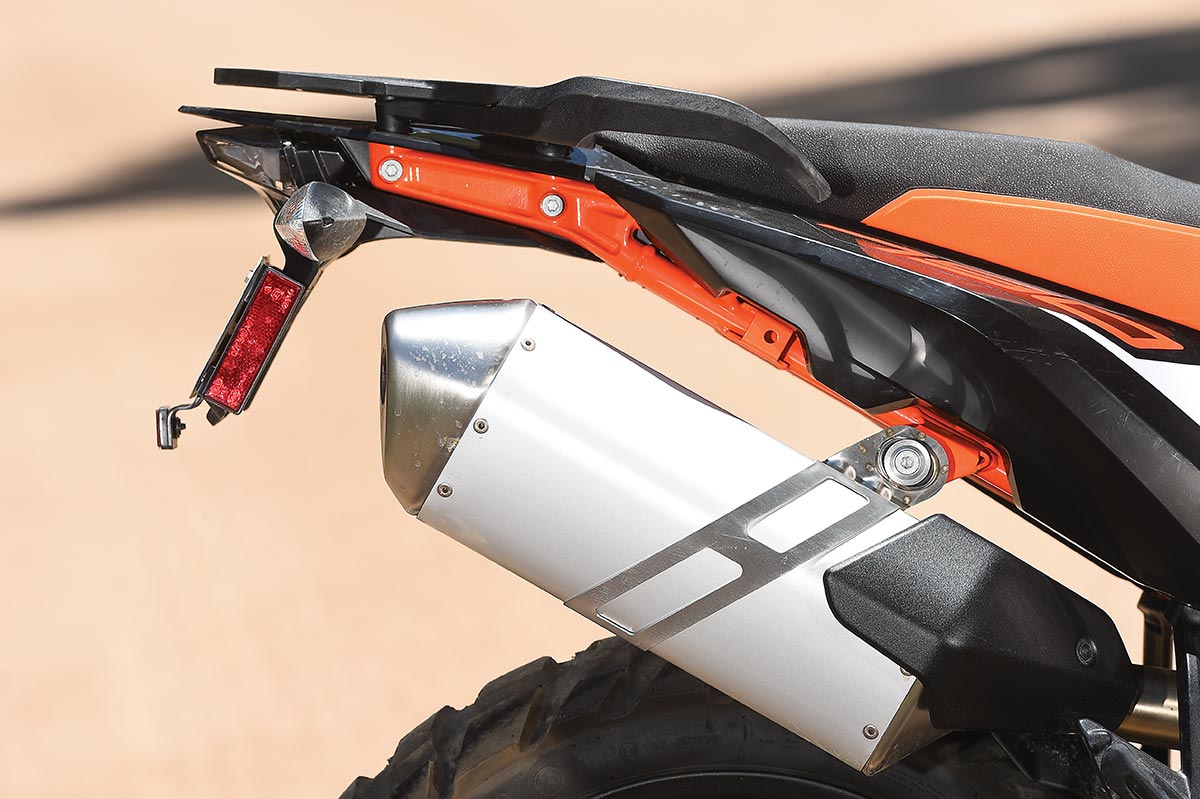 The KTM isn’t loud but still has a very cool rumble.

The front suspension on the R-model is handled by an Xplor fork with 9.4 inches of travel. Compression damping is adjustable through a clicker on the left, while rebound is on the right. There’s also an outer preload adjuster ring on each fork cap. In the rear, the WP Xplor shock is connected directly to the swingarm and also produces 9.4 inches of wheel travel. It also has fully adjustable damping, plus a 10mm range of spring preload. This can be adjusted easily in the field with just a hex key—no hammer and punch required. The suspension is excellent. The 790 can handle a fast, hard pace on dirt roads without getting sketchy at all. If you really want to push the envelope, you might have to max out the preload and bump up the clickers to suit your style, but you will have to stop and do it yourself. There’s no electronic suspension adjustment system for the 790. We’re good with that, as those systems generally add more weight than they are worth.

The bike’s off-road orientation is made clear by a set of Metzeler Karoo 3 tires, which are truly good in the dirt. The wheels themselves are an 18-/21-inch combination. KTM accomplished the fairly difficult engineering task of having spoke wheels work with tubeless tires. Normally, air would just leak out of the spoke nipples, but the rims have a layer to prevent this. The good news is that a puncture can be fixed in minutes on the trail. The bad news is that it’s very difficult to get a tubeless tire unseated and then re-seated if you have a more substantial repair. Even with cast wheels, a big tire cut is generally a ride ender.

OH YEAH, IT’S FAST
Also on the “We Love” list is the power. It has a lot. The motor is quick-revving and sounds like a sexy Ferrari. Output is said to be around 95 horsepower, which isn’t far off the new 1100 Africa Twin, and a bit higher than a BMW F850GS. To deal with all that power, KTM allows you to choose from three levels of throttle response and nine levels of traction control. The throttle-response adjustability is surprisingly useful, and we typically will change it in the course of any given ride. But, the star of the show is the traction control. No one, but no
one has traction control that works this well off-road. Instead of making the bike hiccup and sputter, it seamlessly lowers the power output according to the situation. Levels 0 through 6 are all perfectly useful and appropriate for off-road use. Above that, you start to encounter some of the glitches that are common on other adventure bikes. Those levels are more appropriate for riding in the rain or on slick pavement.

There are some things that we aren’t crazy about. The KTM doesn’t have an accurate fuel gauge. That fuel tank must be shaped too weird. The tank also makes us nervous in the rocks. KTM test riders say they never punctured one, but it still makes us tense when squeezing past a big stump or a large boulder. A few companies are making crash bars now, but expect to pay around $700. We’re also a little baffled by the lack of a hydraulic clutch. That’s a KTM signature item that even comes on mini bikes. When you get stuck in the sand—and you will if you ride off-road enough—the clutch will heat up and you’ll have to adjust the freeplay. Just like old times. Overall, though, the 790 is an amazing motorcycle. We love it and hope that it influences other manufacturers to take off-road adventure riding as seriously. So far, the only other manufacturer to accept the challenge is Yamaha with the new Tenere 700. How do they compare? Stay tuned.