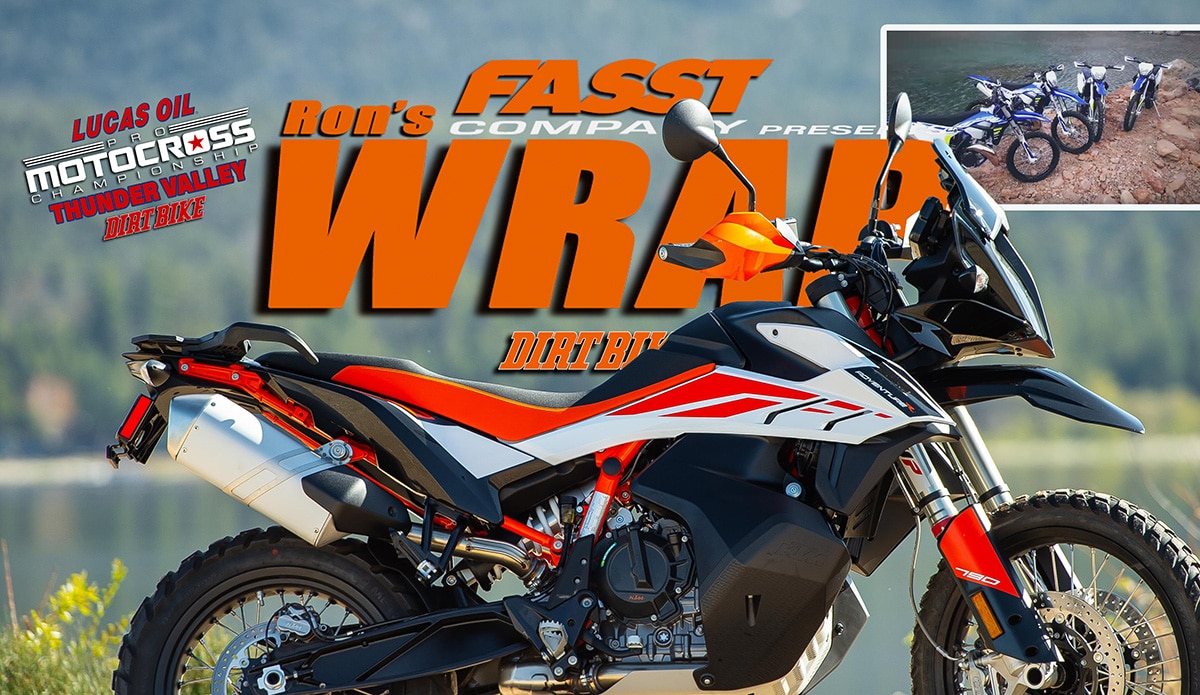 This week the KTM 790 Adventure R arrived and so far we have two days of riding it in the mountains around Big Bear. We’ve been waiting for this bike for a long time now. The concept promises to be a game-changer in the adventure bike world. It’s a bike that produces almost 100 horsepower and weighs 50 to 100 pounds less than any off-road-capable bike approaching that kind of output. KTM started with the 799cc parallel Twin motor from the 790 Duke street bike, changed the power delivery and then put it in a new chassis. The most interesting engineering aspect of the 790 is where it carries its fuel. The gas filler is on top like any conventional bike, but the fuel cell is  shaped like a long pair of waders with big balloon feet. Most of the 5-gallon capacity is held down at the bottom, around the skid plate.

Much of the development for this bike was done in the U.S. with Quinn Cody. He said that there was some internal indecision about carrying the fuel down there at first, and that he did everything he could to puncture the tank in testing. He never succeeded, even though the cell is rather wide at the bottom and takes a fair amount of abuse from rocks. The real innovation in this bike is in traction control. It has by far the most advanced and effective system yet devised. Live most modern adventure bikes, there are “ride modes” that you select. On the KTM, each mode alters throttle response, power output, ABS and what KTM calls “slip control.” As of now, suspension isn’t included in the electronic menu.  The Xplor fork and WP shock have normal clickers for that. 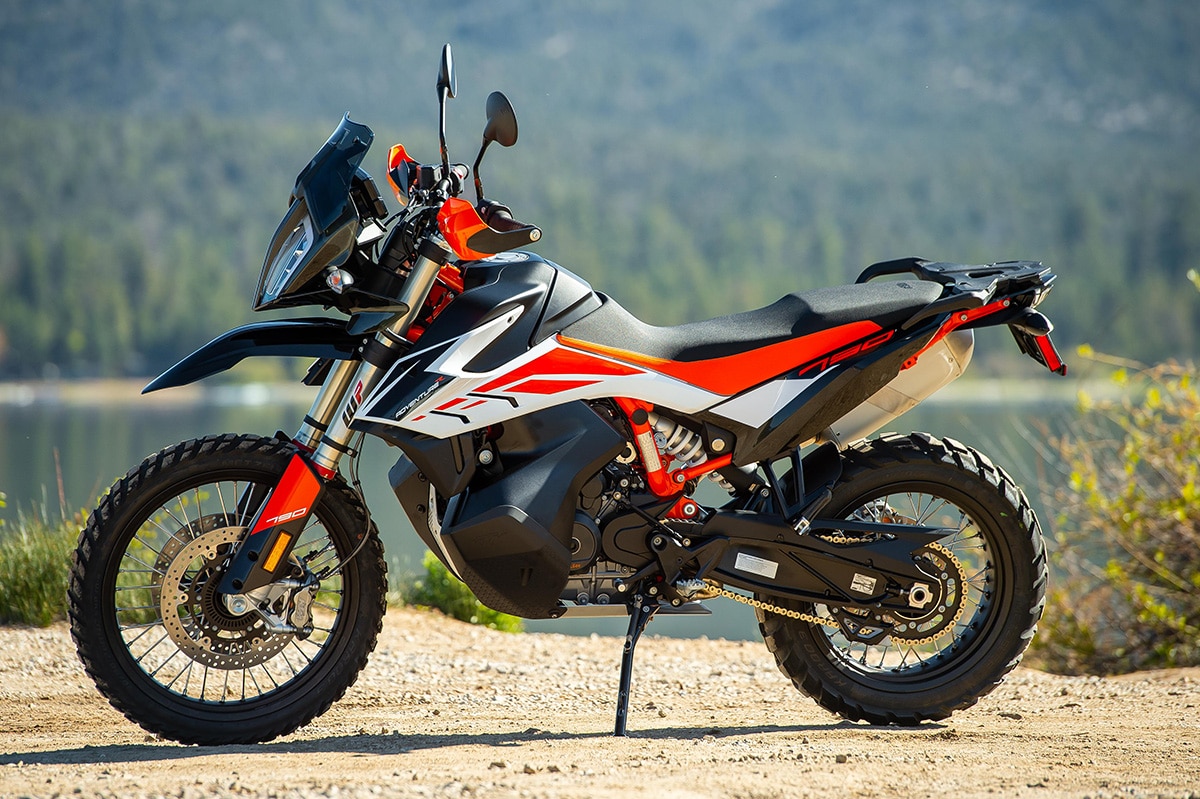 When you put the bike in “Rally mode,” it pre-selects various settings; rear-wheel ABS goes away (but remains on the front brake), the throttle response is changed and so on. Contrary to what you might expect, traction control goes to a middle setting. If you’ve ever messed with traction control on Yamahas, Suzukis and even BMWs, you generally go to zero for off-road riding.  With the KTM, you learn to love traction control.  Without it, it seems like the wheel just lights up and you don’t go anywhere. Level 6 of 10  (with 1 being no intervention) is about right for the average dirt road. It lets you slide the rear end around turns and when you pin it in a straight line, you hook up. Intervention is invisible. The engine doesn’t miss or bog. The computer adjusts power output by closing the throttle slightly (among other means). That’s only possible with ride-by-wire–there’s no throttle cable. Even when you get stuck in the sand, the computer knows what’s going on and lets you spin the wheel. For deep sand, you still might want to go to a lower setting (3 or 4). For rocks, you might go up to 7 or 8.

You still ride the bike like a big adventure bike. The rider compartment is designed so that you have to stand up virtually all the time that you’re in the dirt. But the bike is much less intimidating that anything with this much power. KTM claims the peak power is 94 hp and the weight is 416 pounds, which seems about right. That’s roughly 60 pounds lighter than a Honda Africa Twin with similar horsepower. The KTM has more off-road oriented suspension than the Africa Twin or even a KTM 1090. It’s still a bit of a compromise, as any dirt/street bike is. You shouldn’t have to up the spring rates unless you really plan on pounding whoops or loading the bike with cargo. 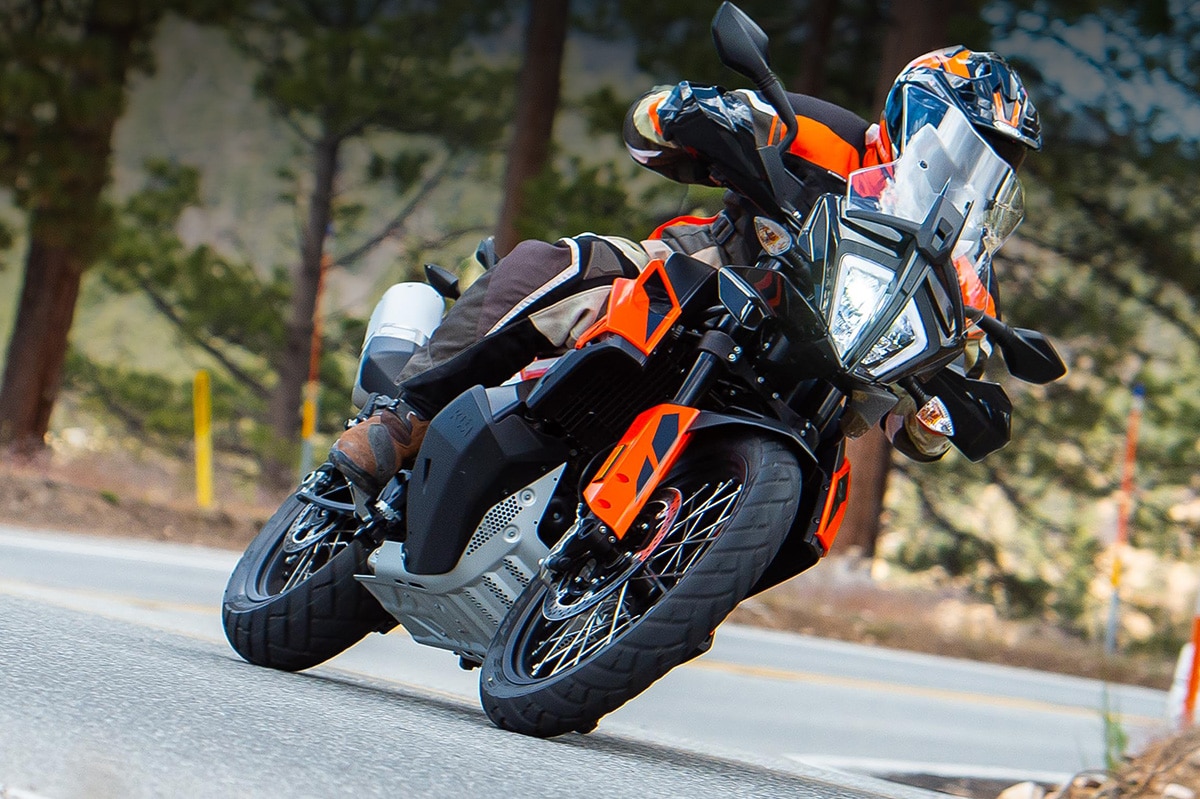 I also got to the the standard version of the 790, which is a little more street oriented. It has different suspension components, a lower seat, a taller windscreen and full-street tires. The standard bike has all the same electronic features. The price difference is $1000; $12,499 versus $13,499 for the “R” model. The difference in suspension is probably worth $1000. On pavement, the bike doesn’t stand out as dramatically. That isn’t to say there’s anything wrong with it; it’s fast, smooth and sort of comfortable. But the world is full of bikes that are this fast and work well on twisty roads. In the dirt, on the other hand, it’s a breakthrough. Hopefully, the trend will continue. For the full test, check out the September, 2019 print edition of Dirt Bike. 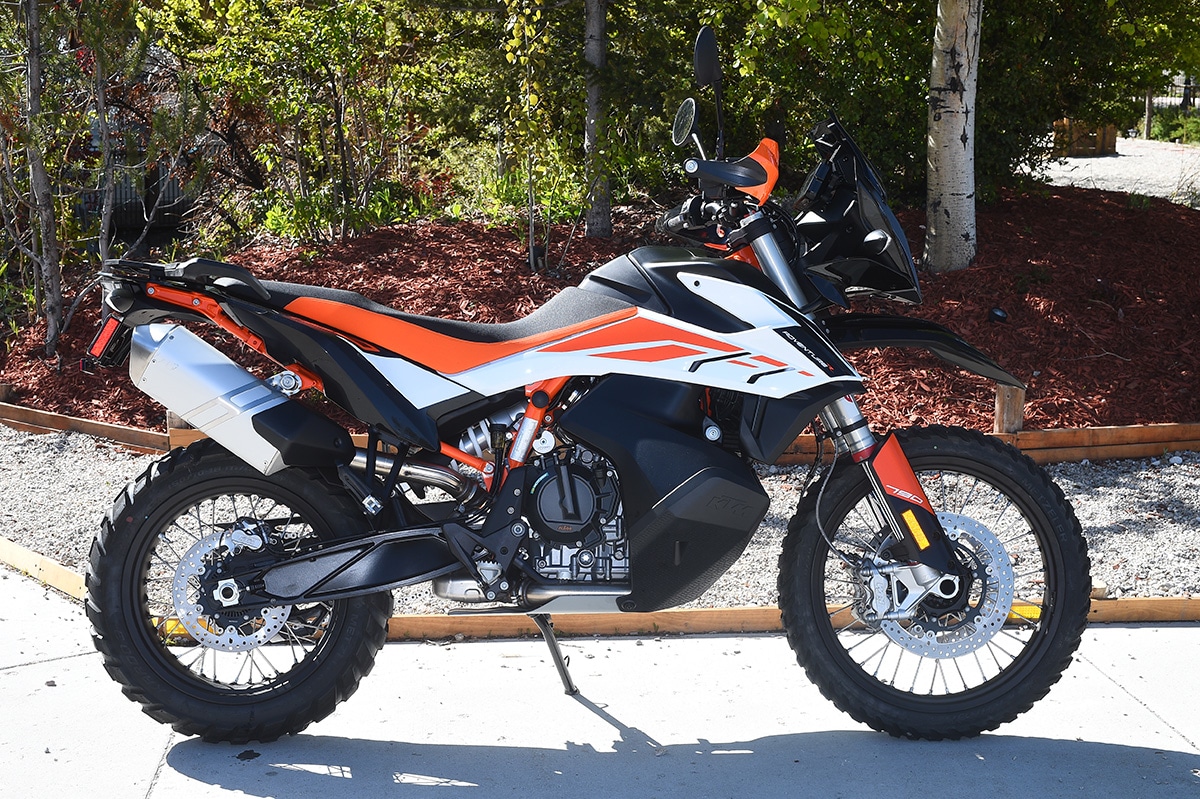 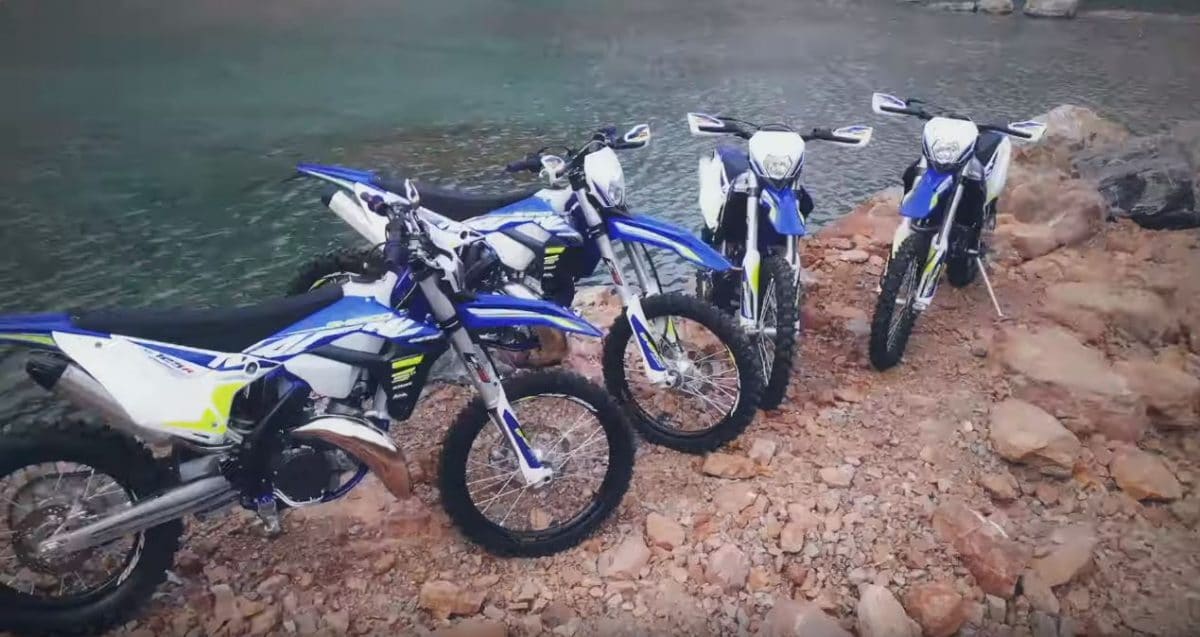 Sherco released a teaser video of its 2020 line, which will again include four-stroke and two-stroke off-road bikes. From the video, it’s hard to see many significant changes, but it will all be made clear next week. The official announcement will be made at the world press launch in Italy, and I’ll be there. Here in the U.S., there are some major changes rumored. We have heard that Ryan Young, who currently imports the trials bikes, will take over for off-road models as well.

Cody Webb might be riding injured, but he still rode the first day of qualifying at Erzberg. This race is fairly unusual in that qualifying is nothing like the actual hare scrambles. It’s a rock-strewn fireroad. Last year, Webb crashed on the second day of qualifying and had to sit out the main event. Josep Garcia is in first and Mathias Walkner in second. Walkner is on his Rally bike and won’t be a factor in the actual race. The riders who still have to better their times are Wade Young, Billy Bolt, Mario Roman, Alfredo Gomez and Graham Jarvis. Tomorrow, qualifying continues  and the main event will go off at 2:30 p.m. Sunday. There’s a nine-hour difference from Pacific time, so west coast Americans have to get up at 5:30 to watch it live on Red Bull TV. East guys can sleep in ’till 8:30. It’s questionable as to whether or not Cody will ride. Click here for coverage of the 2019 Erzberg Rodeo.

If you’ve been paying attention to World MXGP racing, you know that Tim Gajser is kind of a Euro verison of Eli Tomac. He gasses it until he falls, and he still might win any given race. Here’s a little insight into his team. 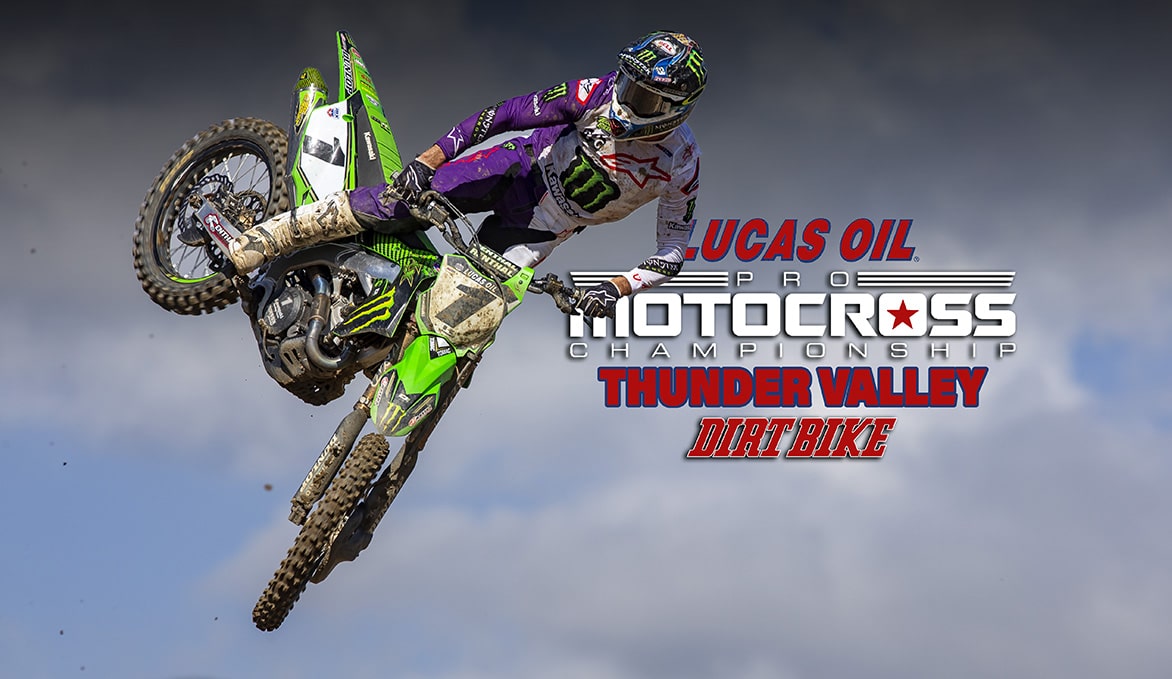 This weekend the Lucas Oil Pro MX series picks back up with Kawasaki on top of both classes. Eli Tomac is the man in the 450 class and it’s sort of his home track. He has won there in both classes–250 in 2013 and 450 last year. For Adam Cianciarulo, he hopes to get his third overall win in a row, but he will have to get through Justin Cooper, who has just as many moto wins. They’ve split the wins at both rounds so far. Click here for coverage of Thunder Valley. Here’s how the points look going in: