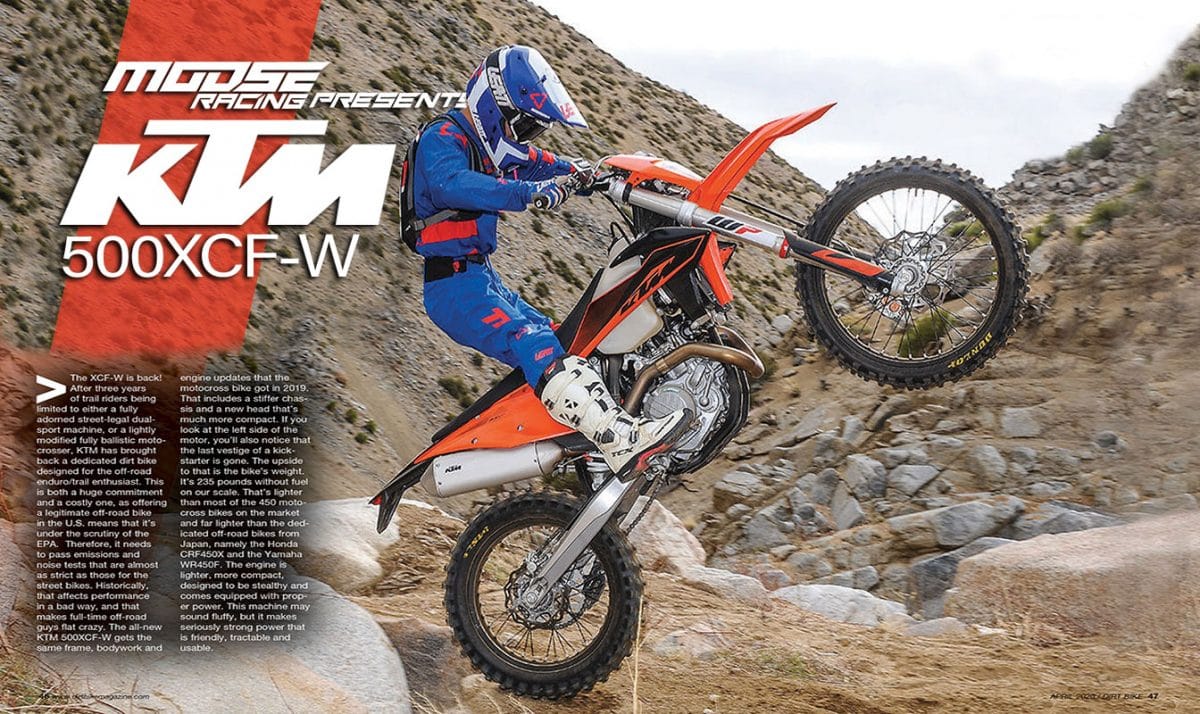 The XCF-W is back! After three years of trail riders being limited to either a fully adorned street-legal dual-sport machine, or a lightly modified fully ballistic motocrosser, KTM has brought back a dedicated dirt bike designed for the off-road enduro/trail enthusiast. This is both a huge commitment and a costly one, as offering a legitimate off-road bike in the U.S. means that it’s under the scrutiny of the EPA.  Therefore, it needs to pass emissions and noise tests that are almost as strict as those for the street bikes. Historically, that affects performance in a bad way, and that makes full-time off-road guys flat crazy. The all-new KTM 500XCF-W gets the same frame, bodywork and engine updates that the motocross bike got in 2019. That includes a stiffer chassis and a new head that’s much more compact. If you look at the left side of the motor, you’ll also notice that the last vestige of a kickstarter is gone. The upside to that is the bike’s weight. It’s 235 pounds without fuel on our scale. That’s lighter than most of the 450 motocross bikes on the market and far lighter than the dedicated off-road bikes from Japan, namely the Honda CRF450X and the Yamaha WR450F. The engine is lighter, more compact, designed to be stealthy and comes equipped with proper power. This machine may sound fluffy, but it makes seriously strong power that is friendly, tractable and usable.

WHAT’S NEW?
KTM’S powerplant is a 510cc, SOHC, six-speed, fuel-injected design that is lighter than any big-bore four-stroke KTM has offered in the past. It has new camshafts, a new head, updated fuel injection, and reworked engine cases that reduce the weight by nearly 300 grams. The design allows for a centralized shaft configuration, making the engine very compact and helping to promote efficient centralization of mass. A new, lightweight, box-in-box type piston made by König uses a 10-percent-lighter piston pin for more performance and less vibration. The compression ratio has increased from 11.7:1 to 12.75:1 for even stronger engine performance.

The XCF-W is fit with a new 6-speed transmission made by Pankl Racing Systems and features stronger materials for enhanced durability and reliability. All four-stroke engines are fitted with a gear sensor, giving the option of different engine characteristics for each gear.

The electronic fuel injection feeds through a new Keihin 42mm throttle body. There are separate systems for cold starting and idle adjustment, while an improved seal of the MAP (manifold absolute pressure) sensor targets reliability. The 500XCF-W’s ECU features mapping that has been adapted to the new exhaust, airbox and engine configuration, regulating the unique traction control. It is activated by a map-select switch. It provides different maps for each gear, according to the information received from the gear sensor, ensuring maximum power as you shift through the gears.

Finally, KTM has fit its four-strokes with two-piece header pipes that allow better access to the shock. The exhaust bung (O2 sensor) on the header pipe shows that it’s a closed-loop EFI system, which is new. A closed loop is when the ECU refers to the O2 sensor for feedback, and the ECU will modify its fuel table based on the readings of the O2 sensor. Out back, the muffler is shorter and more compact and has a spark arrester.

As for the chassis, the new chromoly frame uses aluminum headstays for less vibration and has a lighter, longer rear subframe for better rear-fender stability. KTM has lowered the radiators 12mm for improved handling and more efficient radiator flow. For further cooling, the machine has a fan that kicks on when the motor is under a load in tight conditions with slight airflow.

Up front, the 500 is fit with a 48mm-diameter WP Xplor fork. It’s a split fork design where each side is fit with springs but has separate damping functions. Compression damping is on the left, and rebound damping is on the right. Both are adjusted by dials on top of the fork tubes. The new fork features a calibrated mid-valve piston for more consistent damping and has new upper fork caps and clicker adjusters for easier adjustment with a new color and graphic design. The updated valving keeps the front end higher for better control and improved bottoming resistance.

The rear suspension employs a WP Xplor shock absorber with the link-less PDS (progressive damping system) rear suspension design. Used on KTM’s off-road line, the PDS design is lighter and offers easier maintenance and good rock clearance. The damper has new valving and improvements to the secondary piston for better bottoming resistance. It uses a progressive spring and has adjustable high and low speed compression and rebound damping clickers.

Once again the hubs are CNC-machined and mate to Giant rims. The spoke nipple is a new design that requires less maintenance. The brakes remain Brembo. The tires are Dunlop AT81s. The handlebars are Neken (tapered bulge, no crossbar) with four-position adjustability, and the grips are lock-on ODIs.

As for the bodywork, KTM designed the new tank and plastic to achieve what they call “harmony between rider and bike.” The new fuel tank’s size is 2.25 gallons. It’s see-through and uses KTM’s 1/4-turn bayonet filler cap. The fuel line uses a 90-degree connector, so it’s tucked out of the way, and the fuel pump is integrated into the tank.

First off, don’t let the soft exhaust note on this machine lull you into thinking it’s a docile lump of uninspired meat. It starts quickly and easily, purrs rather than belches, and is fit with a cockpit that is fairly tight if you’re over 5-foot-10. The clutch pull is light via the Brembo hydraulic unit, and once you snick it into gear, things happen quickly (though silently enough to make you think you’re wearing earplugs). First, second and third gears are spaced nicely, though first is only required for the slowest of tasks. Second and third have huge amounts of meat that is lathered in torque. The mapping is tight, as the machine runs super clean. We started off running Map 1. This is a bottom-power-oriented map designed for tight terrain. Map 2 lets the bike rev up quicker and pulls longer and harder. For the majority of our trails, we rode with Map 2.

This machine makes strong power, but it’s whisper quiet. It’s when you’re climbing some seriously huge sand hills that would rob power on any 450 that you feel the force. It doesn’t like to rev; it works best when you stay in the mid- to early-top band of power. On the trail, similar tactics worked well. Stay in the mid meat. Remain smooth with the throttle, use slight clutch finesse and you can cover terrain quite adeptly. She flamed rarely, far less than most four -strokes, though we were still caught unawares when the 500 coughed and stalled.

The bike comes with a Traction Control mode, though we used it sparingly since our terrain had great traction because of recent storms. We did test it on loose, rocky uphills, and it does fight wheelspin. This is something we need to spend more time testing. As far as gearing, it comes with 14/48 sprockets, and in our speed runs, the numbers worked out to 52 mph in third gear, 65 mph in fourth, 77 mph in fifth and 90 mph in sixth! That’s one of the advantages of having big-time torque available to pull gearing that would make a lesser machine feel gappy. During the testing, we had a Husky FE450 and Honda CRF450RX along for comparison. Every single test rider came away saying the same thing: “It’s so quiet that it feels slow, but when you go hill-climbing that machine is incredibly strong!”

• Engine vibration
• Soft suspension
• No kickstarter (though, to be honest, this was never a problem

The suspension is very trail-oriented. We had good feel with the Xplor fork, as it’s super cushy and plush, but even with our smaller testers it would blow through the travel when pushed. Adding several clicks of compression damping helped, but larger dudes are going to need stiffer springs, both fore and aft. Out back, the PDS is responsive, loves to engage the hack, and is a strong performer in rocks. It does tend to ride high, though, and isn’t a huge fan of successive whoops. It prefers rocky, craggy junk and roots.

This machine is very light (235 pounds with no fuel), making it more svelte than the majority of motocrossers on the market. It has very good manners, is responsive to input and feels nimble on the trail. On long trail rides, it was easy on the pilot due to its usable power and plush suspensions. Our more adept testers did not scoff at the fluffy voice, but embraced the volumes of torque and could get the machine to dance in technical terrain.

BITS AND PIECES
KTM did good work with the cooling system, because the radiator fan rarely kicked on. The airbox is accessible with no tools, and there’s a reed valve between the air filter and the throttle body that helps with noise abatement.

Good marks go to the Neken bars and ODI grips. The Brembo brakes and hydraulic clutch also get an A rating. Larger guys can move the bars forward, and if they need them taller, Enduro Engineering has spacers that get them up. The mapping switch is on the left side of the bars and is super easy to use. There’s Map One, Map Two and TC (Traction Control).

Good marks go to the footpegs, X-ring chain, plastic skid plate and handguards also. Gas mileage in our area (which has big sand hills that are not fuel-consumption friendly) was 25 miles to the gallon. That’s better than our 300 TPI!

Perhaps the most asked question about the 500XCF-W was: “When are you going to uncork it?” To be honest, this is a trail machine. And while it may lack the wicked hit of a 450 motocrosser, it’s a machine that you can use to finesse up a rock waterfall, climb monster hills and cruise by horseback riders without them rearing and cussing you out. Finding more power isn’t high on the agenda. This machine makes us smile just as it stands.

HAPPY TRAILS
The KTM 500XCF-W could be the off-road bike of the year. We didn’t expect a machine with such a quiet appetite wrapped in a chassis with the handling prowess and light weight of a serious racing machine. In its element, it has no equal in stock form. It’s the most powerful, quietest, cleanest-running and lightest EPA-legal, off-road machine on the market.