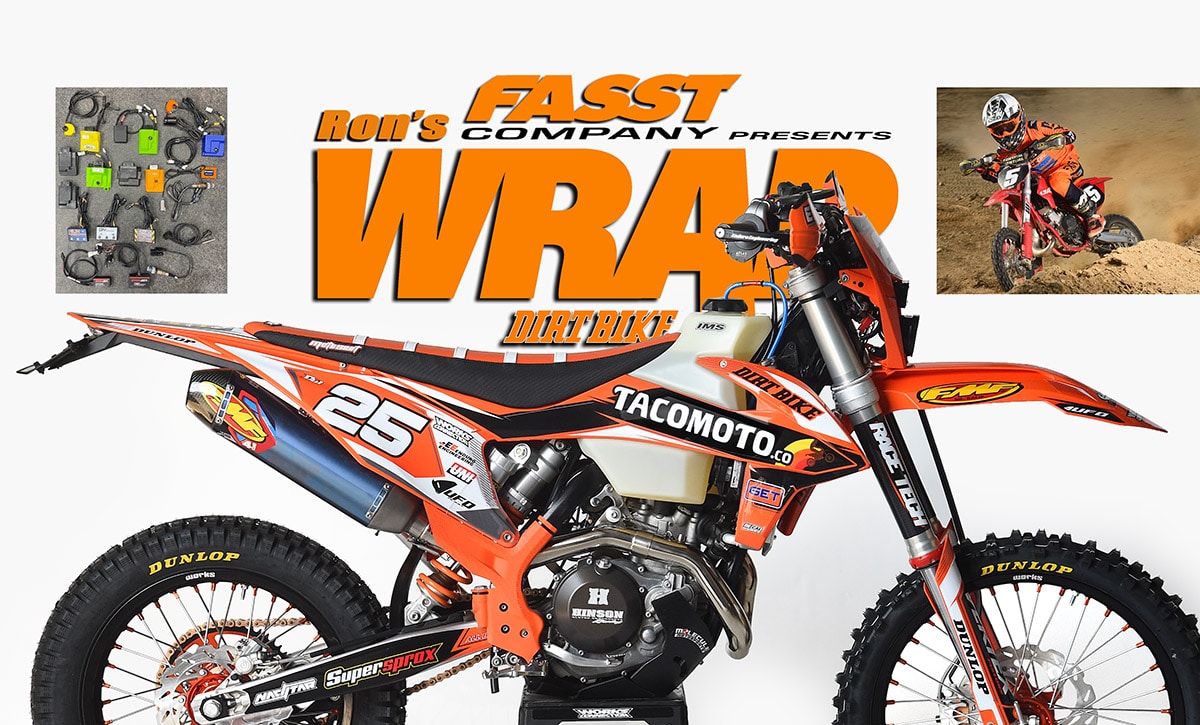 This week I got to ride my 2020 KTM 500EXC for the first time in about six months. This was the bike that won our 2020 dual-sport shootout. I purchased the bike directly from KTM after the test and then promptly didn’t ride it. That’s a pattern with me. I get to ride some of the coolest bikes on earth, so I don’t always have time to ride things I own. How many bikes do I own? That’s classified information. My wife might be reading. 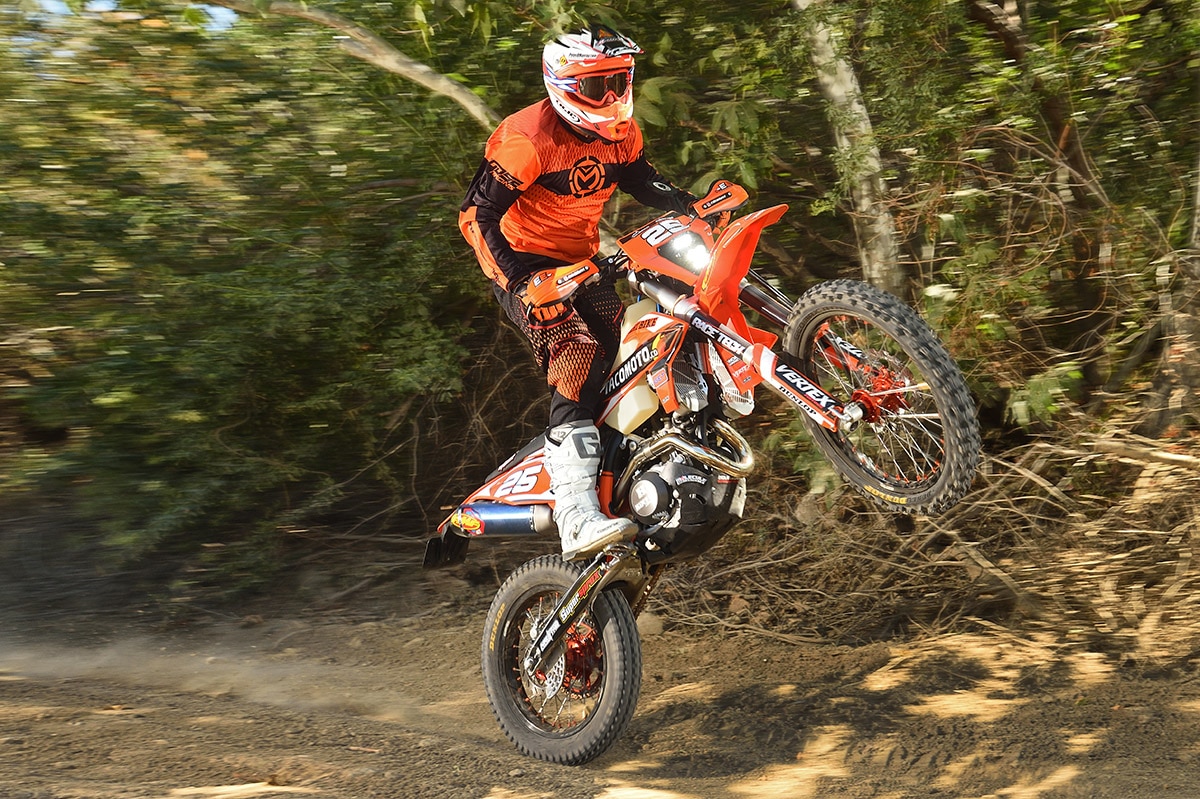 In the case of the 500EXC, I planned on building a rally bike in order to take part in the Sonora Rally. That took place two weeks ago and I wasn’t there. The bike I wanted to build wasn’t going to happen in time, but I was inspired by the KTM 350EXC that Jay Clark built for the cover of the May, 2021 print edition of Dirt Bike. One of the principal sources for the parts on that bike was Mike Spurgin at Tacomoto in Las Vegas–(702-812-6626.) Mike is a hard-core dual-sport fanatic. Most of the shops that sell dual-sport parts usually fall into one of two categories. Either they are just moving Chinese bling parts, or they are race shops that convert dual-sport bikes into motocross bikes. Mike isn’t either one of those. He rides dual-sport bikes, learns how to make them better and then makes the parts to accomplish that. As good as it is, there’s lots of room for improvements on the stock EXC.

“I consider the stock KTM 500EXC the best single bike available today,” says Mike. “If you wanted just one bike that you could race and take trail riding, that’s it. You don’t have any worries about red stickers or green stickers, you just ride it.” But even Mike admits that the KTM 500 isn’t at that level in stock form. “KTM did a great job of getting it past all the DOT requirements legitimately, but there’s a lot of performance left behind in that process. In other areas it’s clear that KTM was just trying to save money.”

Mike went to town on the 500EXC, fixing all the sore points that he had already explored on his own KTM. These things include the fragile license plate bracket and blinkers, the preposterously oversize handlebar switches, the weak, ill-pointed headlight and the clumsy fuel tank connectors. Mike and his buddy Chris Vestal at MotoMinded have solutions for all these things before you ever start thinking about performance. One particularly clever design that Mike came up with was to convert the charcoal canister into a coolant overflow reservoir.

He admits that some of these items don’t comply with official DOT specifications. They do, however, pass the practicality test. The blinkers aren’t in the traditional locations, but everyone knows exactly which way you’re going to turn. If a Highway Patrolman gives you a fix-it ticket for any of this stuff, more than likely, it’s really about your bad behavior, not anything about the bike. 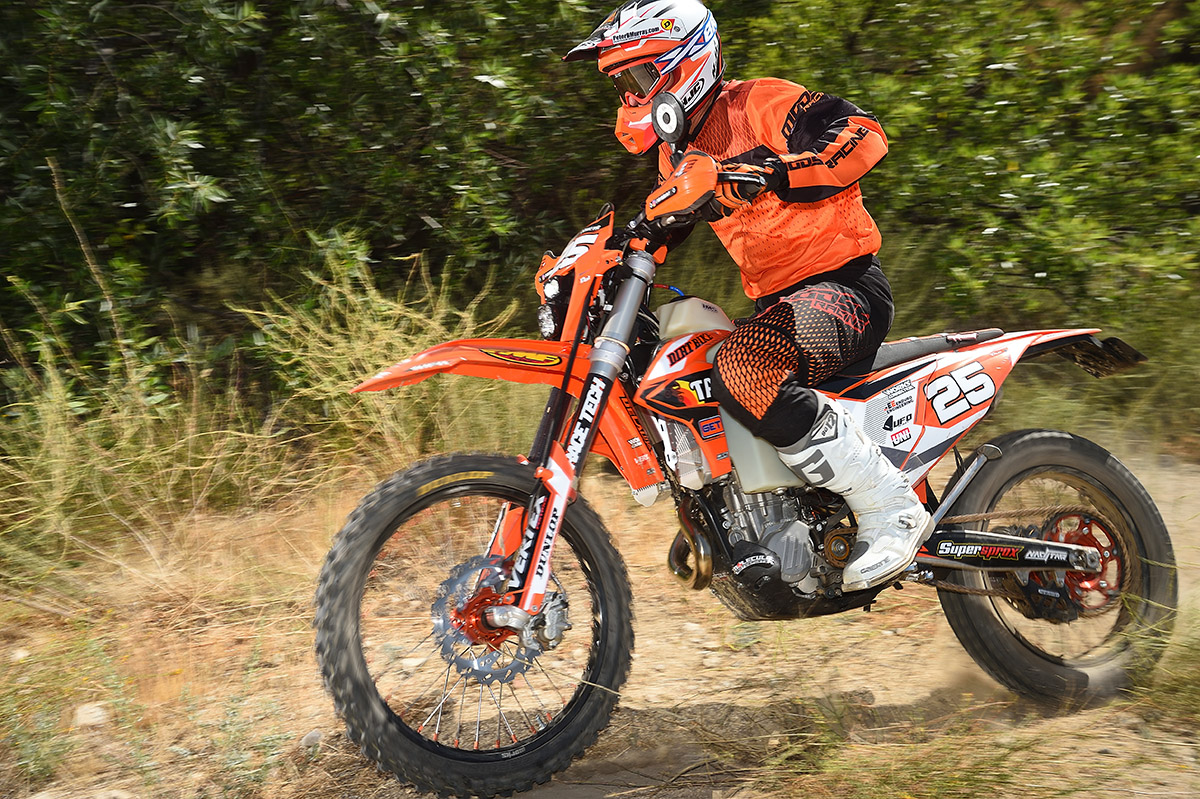 As far as performance goes, everyone should be aware that the bike is tuned to meet sound and emissions standards and that it’s no longer legal if you tamper with that stuff. I tampered with all that stuff. Come and take me away. I installed a GET ECU with a map that Mike developed for the FMF RCT 4.1 slip-on muffler and the stock headpipe–which was polished by the guys at MX Refurb.

It goes without saying that I had to switch the tires. At the suggestion of Jay Clark, I gave the Dunlop 950 DOT trials tire a try in the rear. This is a fully legal tire on the road and is said to get excellent traction on hard-packed dirt and rocks, which is mostly what I ride. It isn’t very good in mud or sand, which I try to avoid. The wheels are from Nacstar, simply because I believe in having two sets of wheels for any dual-sport bike, You don’t want to burn your good rubber on the pavement. When you install real off-road tires on the KTM, you have to install rim locks and balance the wheel, in case you don’t already know. I used Tacomoto’s wheel weight kit with one rim lock in each tire.

There are a number of other products and companies involved here, all used with Mike’s advice. The fuel tank is an IMS, the mirrors are from Double Take, the skid plate is from a company called Molecule, some of the switches are from SAR. Works Connection, TM Designs, Supersprox, Hinson, Rekluse, Motoseat, Tusk, ODI, Enduro Engineering and UFO all were represented somewhere. I used Race Tech to rework the suspension.

I’ve only ridden the bike once since completion, but I already know that it’s incredible. It’s smooth, fast and the EFI mapping is flawless. There’s a full story coming in the print version of Dirt Bike Magazine.

OTHER PROJECTS IN THE WORKS 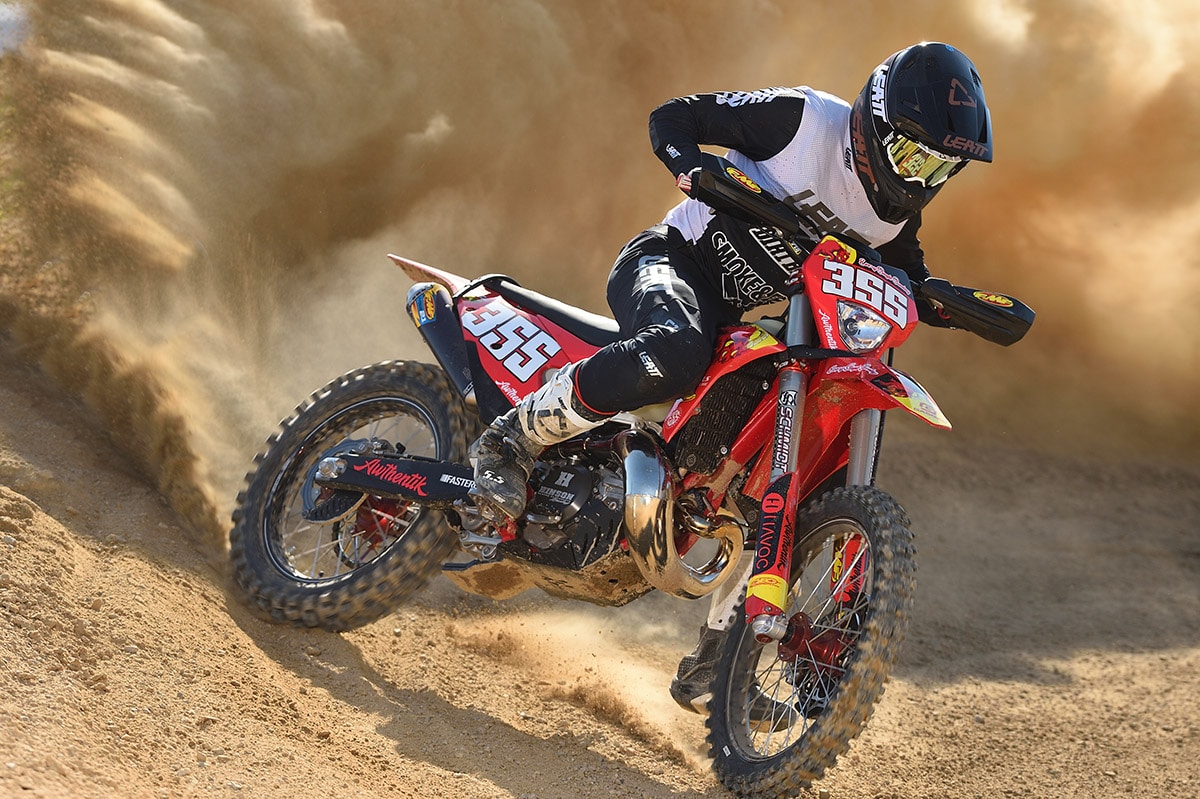 The year 2021 will be known for many things. One will be a bike shortage that has affected everyone. Without new bikes to test, we have been involved with more project bikes than ever before. Yesterday, I shot some images of a Bike Bandit GasGas EX300 project in the works with Sean Foos.. 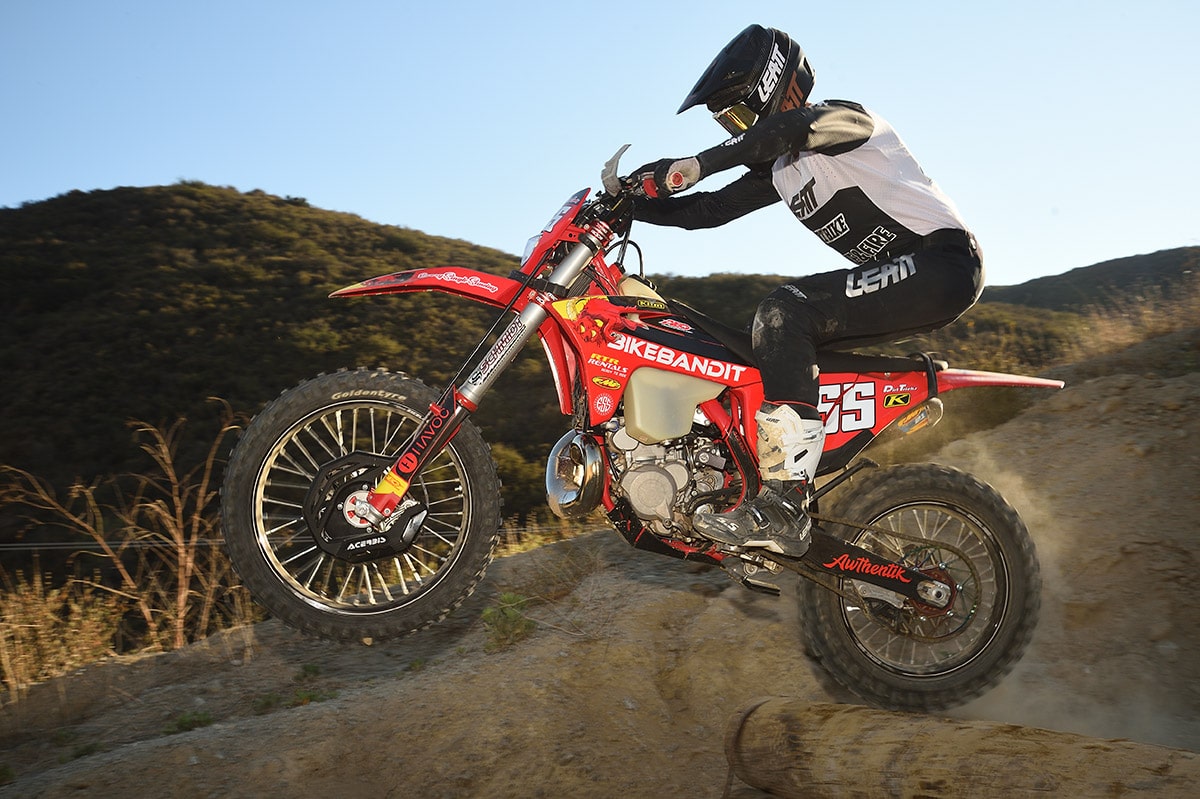 Last year we partnered with Dirt N Iron on a Yamaha YZ250 two-stroke project. Next up is a KTM 300. Look for both of these bike on Two-Stroke Tuesday and check out the Dirt N Iron Youtube channel for lots of other projects.

In case  you don’t know, Mark Tilley is the man who finds all these projects and builds some himself. Right now he’s working on a GasGas 65 for his son Jacob, who is stupid fast despite being an honor student. He will soon appear pictured in the summer release of FXR’s gear. 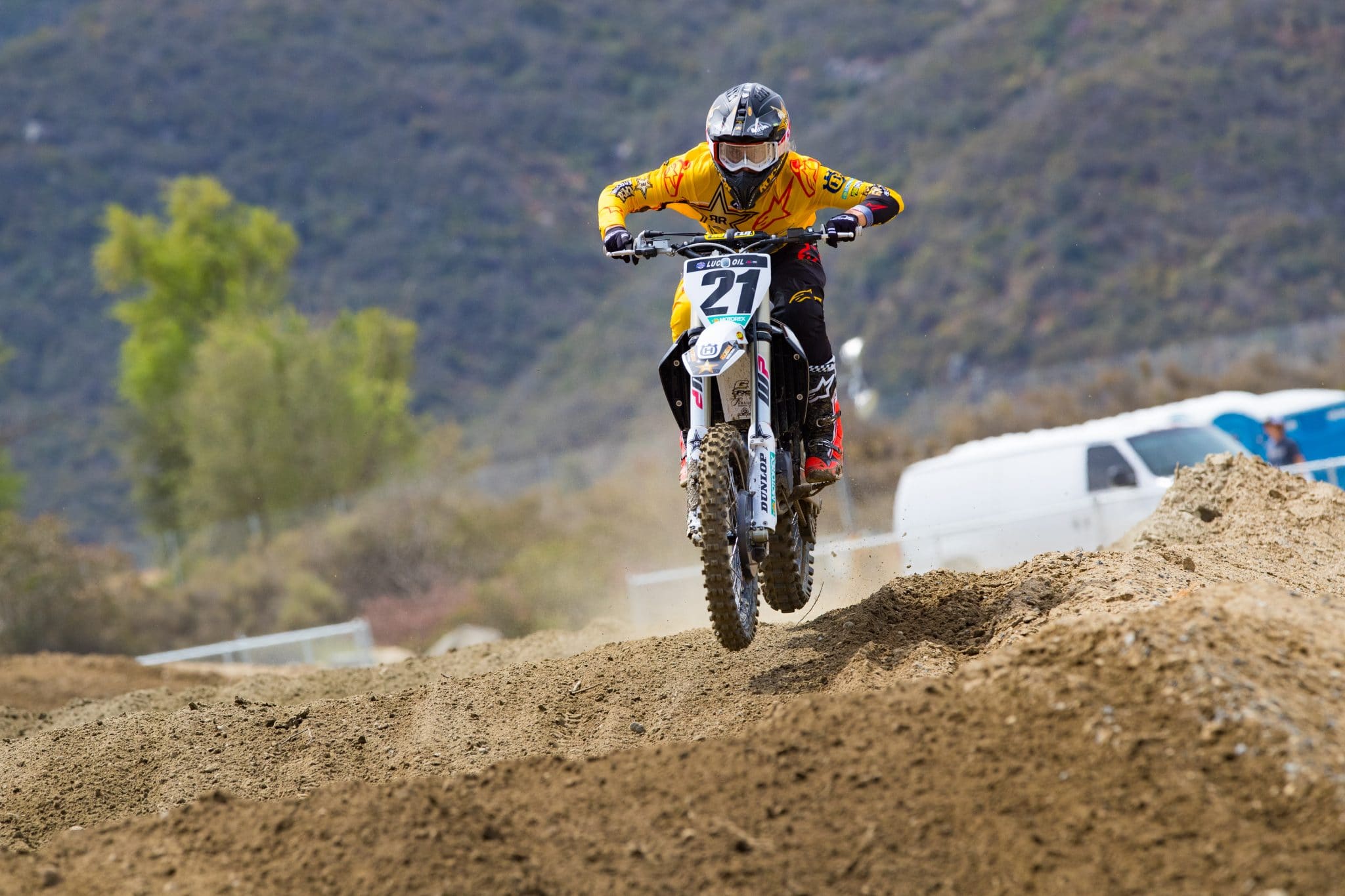 Thunder Valley will be  second stop of the year for the Lucas Oil Pro Motocross series. Out of the series early is Jason Anderson, who broke his ankle in practice. Rockstar Energy Husqvarna Factory Racing’s Jason Anderson has sustained a broken hand following a practice crash that took place earlier today in his home state of New Mexico. Anderson is expected to miss six to eight weeks of the 2021 AMA Pro Motocross Championship, beginning with this Saturday’s Thunder Valley MX National in Lakewood, Colorado. Almost all of the other factory teams are at full force, and you can check out the results as they happen right here at www.dirtbikemagazine.com.

In the Rally world, Daniel Sanders has joined the GasGas Rally team starting with the upcoming Rally Kazakhstan. Undoubtedly one of the hottest prospects in rally racing, Sanders will compete in the FIM Cross-Country Rallies World Championship before taking on the big one, the Dakar Rally next January.

Skyler Howes will have his second ride on the Factory Husky team this week in Kazakhstan. He recently went to Spain to carry out testing with the team. Skyler is keen to make a strong impression while also conscious of the task ahead of him – continuing to build his speed and skills ahead of his Dakar debut for the Rockstar Energy Husqvarna Factory Racing team next January. 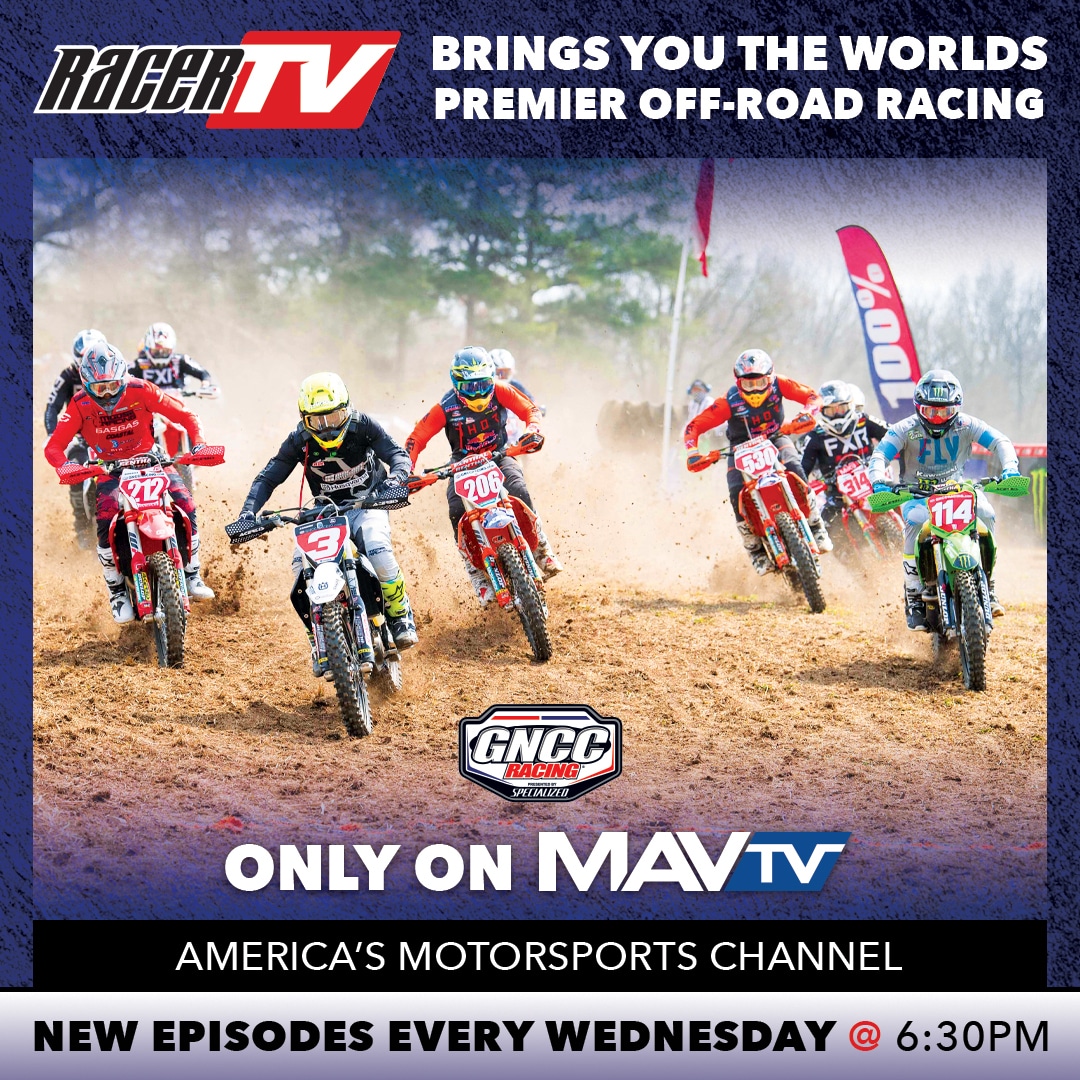 GNCC and MAV TV will again partner up to air off road races through the beginning of the 2022 year with the finale airing on March 16. MAVTV will air a new show every Wednesday evening, during their prime time programming slot of 6:30 p.m. ET. Each month premiere episodes will be followed up by a handful of repeat airings throughout the course of the season.