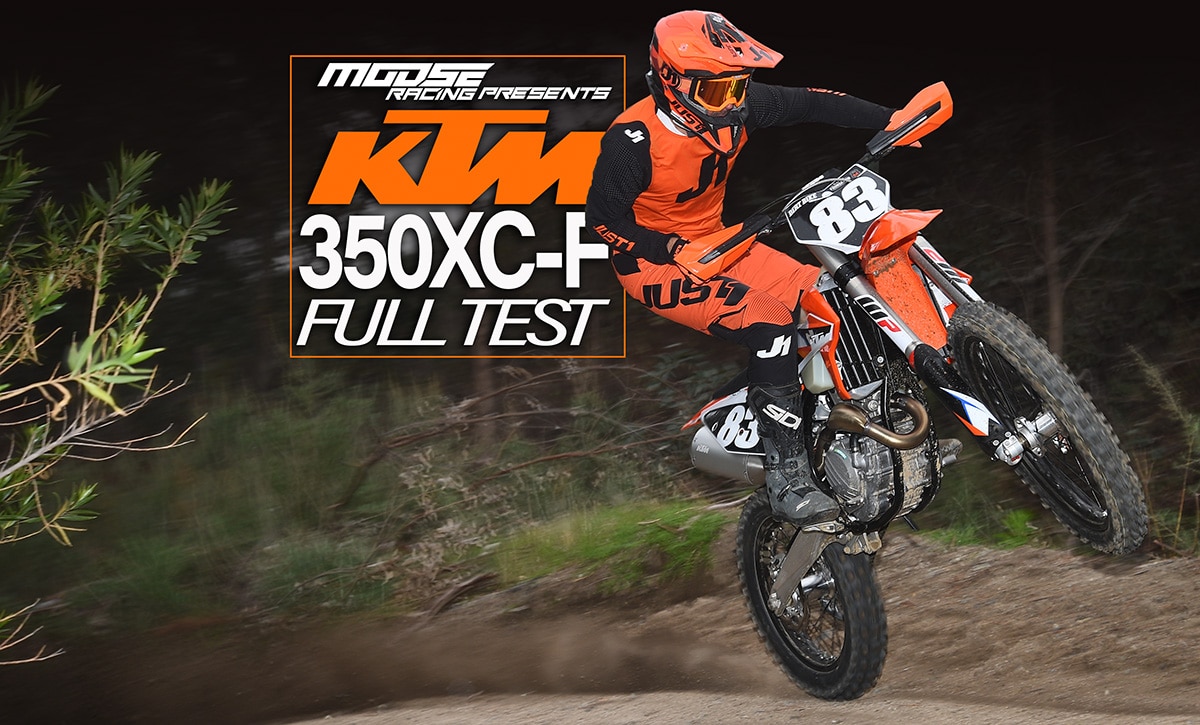 Some motorcycles become icons after generations of service. Others graduate to that status ahead of schedule. That happened with the KTM 350XC-F. It came out 10 years ago and almost immediately was granted membership in the elite ranks of racing. Now, it’s generally acknowledged as the winningest off-road bike of the past decade, maybe even of the 21st century. From the GNCC XC1 class to National Enduros and EnduroCross, the 350 is the bike to have and the bike to win on. How come?

A MATTER OF TIMING
Looking back on it, the 350’s success isn’t so hard to understand. It came along at the tail end of the four-stroke revolution. Prior to the 350, rank-and-file off-road racers were still devoted to their two-strokes. Suddenly, there was a four-stroke alternative that was light, fast and even had electric-start. You could still love your two-stroke and find room for a 350 in the garage.

The 350XC-F has undergone a gradual transformation from that first model into the one we have now. Every part has changed, although the general configuration is the same—electric start, hydraulic clutch, double overhead cam, finger-followers. That first model had a kickstarter, which subsequently disappeared. Back then, like today, the 350 was closely related to the 350SX-F. It’s still a full-blooded competition bike; there are no concessions for noise or emissions. In fact, the federal government classifies it as a closed-course competition bike. In order to make the transition to off-road, it has the following features:

For 2021, there are very few changes. The WP XACT air fork got a number of long, overdue updates, including a new mid-valve and a redesigned bottoming system and new adjusters that can be altered without a screwdriver. Otherwise, the bike is just like the 2020 model, which wasn’t that different from the 2019 one.

TO RACE OR NOT
In most ways, the 350XC-F is just like the motocross bike. For larger bikes, we would tell trail riders and non-racers to walk away. A 450XC-F, for example, is just too aggressive for someone who wants to go exploring and sightseeing. It will stall, overheat, wheelie and generally try to eat anyone alive who isn’t 100 percent committed to going fast. That’s not necessarily true with the 350. Yes, it makes a ton of power. But, most of that is generated through rpm. The 350 has the longest, most linear powerband in the world. It makes relatively mild torque down low, then has a little midrange hit—just enough to be fun and not difficult, After that, it just keeps revving and revving, making more and more power. On top it can hang with 450s. The peak power is only about 10 percent less. How far you go towards that peak is up to you. That’s why the 350 is such a versatile, universally effective bike. For a trail ride, you never have to go above 9000 rpm. In a race, you never have to go below that point.

What generally makes it super powerful so unmanageable on the trail is the stall-or-spin syndrome at low revs. Be too conservative with the throttle and you risk turning the lights out; too much gas and you don’t hook up. The 350XC-F is great at low revs. Yes, you can stall it, and yes, it can bring too much, too fast. But, you learn what it wants very quickly. It’s very easy to ride around those issues with a little clutch work. The clutch, incidentally, is awesome. The pull is light, the engagement is consistent, and it doesn’t change as it gets hot.

Racers find it easy to run with the big dogs on a 350. Remember when Tony Cairoli won the 2010 MX World Championship on the first 350? He actually pulled holeshots against works 450s on a regular basis. The production 350 of today is said to run much better than Cairoli’s works 350 of 2010, whereas 450s haven’t changed that much. The moral of the story is that some riders—if not most riders—find it easier to ride the 350 faster and longer. Power is its own worst enemy when it comes to handling. At 224 pounds without fuel, the 350 is only 2 pounds less than the 450. You would swear it’s 20 pounds. The impression of weight comes from several factors beyond the number on the scale. The 350’s crankshaft mass is considerably less, and that means it’s less subject to the physical laws that make a gyroscope hold its position in space. So, the 350 can change direction more easily and be tossed around with less effort. And, the smooth, long powerband is another big factor. You simply don’t have to be that careful with the throttle. When you whack it open, there’s less yank, and when you close it, there’s less engine braking. All that adds up to less mental and physical fatigue.

Like most KTMs, the XC-F has a handlebar-mounted switch that lets you switch between two different maps and access traction control. You can easily tell the difference between maps, but it falls into the “who cares?” category. Both are good, but they just peak in different places. Traction control is interesting because it is completely invisible until it’s not. Occasionally, you run into a situation where you suddenly notice it’s doing something. In small rocks, that’s a good thing; in sand, it’s not.

AIR ME UP
The new internals of the 2021 WP Xact 5548 air fork are the biggest single improvement to that unit since it came out. Most of the mid-stroke harshness and resistance to square edges is gone. The concept of using air pressure instead of a coil spring makes perfect sense on an off-road bike. The same rider might do a GP on one weekend and an extreme enduro the next. No coil-spring fork can do both. The 350XC-F’s fork can, but you have to do your homework and know what air pressure and which settings you’ll need ahead of time. You can’t do all your adjusting with air alone, as that will upset the bike’s overall balance. But, if you work with both air and damping changes, you can find a configuration that works for just about anything.

Having said that, dedicated motocross riders who use the 350XC-F as their sole bike will find that the set up is a little soft in most situations. That magnifies the issue that most motocross riders have with air, which is too much movement in turns. The WP is the best air fork ever, and it gets better every year, but it’s hard to match the performance of a coil-spring fork that is sprung and set up properly.

Still, there’s virtually no off-road rider or racer who is beyond the lure of the 350. Trail riders? Yes. Motocrosser? Yes. Extreme enduro nutcases? Yes. Two-stroke fanatics? Yes—at least more so than any other thumper. It’s probably the only bike on the market that can make that claim. For the last 10 years it’s been in a class by itself. It’s kind of weird that, in all that time, no other maker has offered any competition for the 350. You can’t blame KTM for doing it to themselves, but that’s another story.