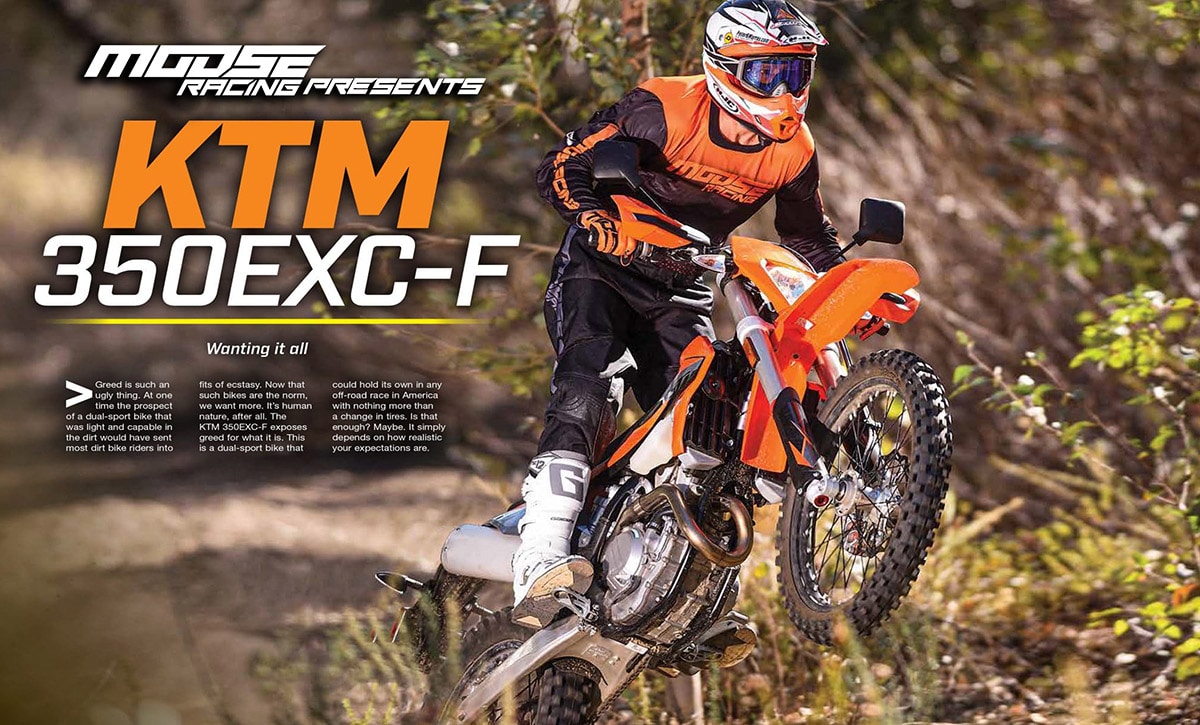 Greed is such an ugly thing. At one time the prospect of a dual-sport bike that was light and capable in the dirt would have sent most dirt bike riders into fits of ecstasy. Now that such bikes are the norm, we want more. It’s human nature, after all. The KTM 350EXC-F exposes greed for what it is. This is a dual-sport bike that could hold its own in any off-road race in America with nothing more than a change in tires. Is that enough? Maybe. It simply depends on how realistic your expectations are. 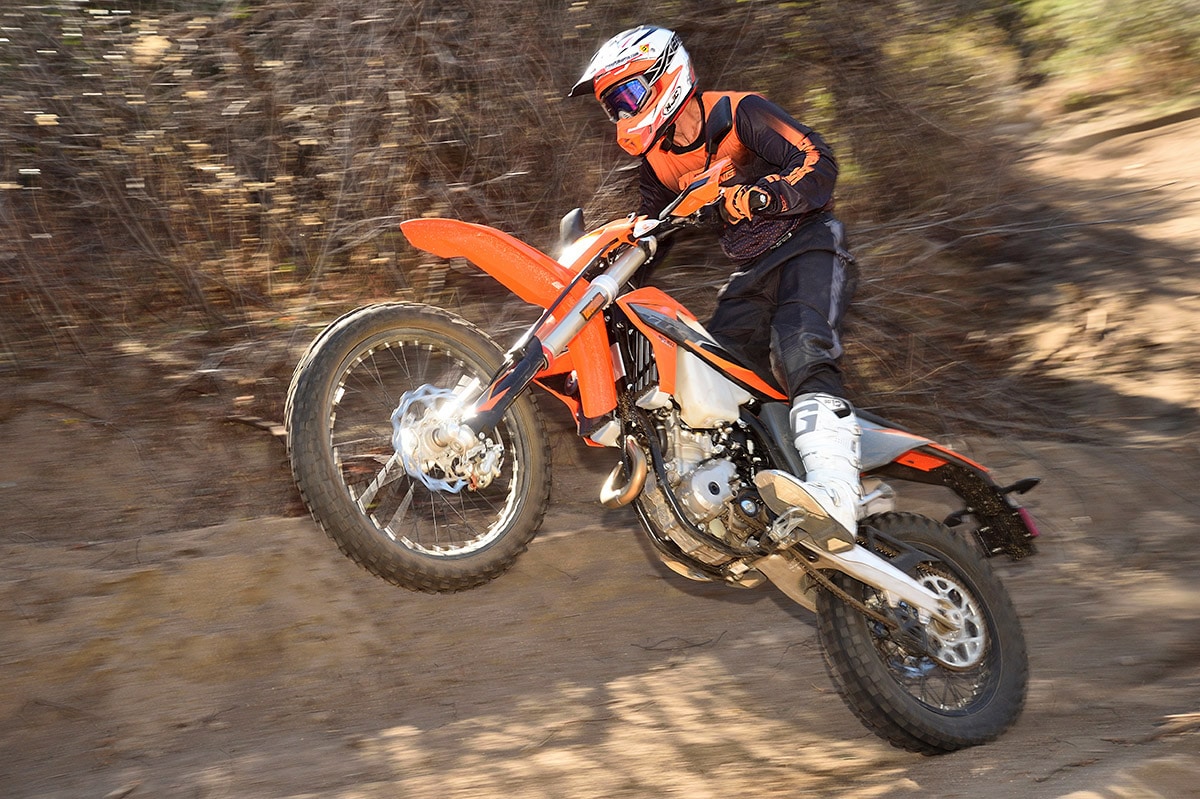 DUAL DILEMMA
The 2021 KTM 350EXC-F is one of four 350cc four-strokes made by KTM. There’s a motocross bike (the 350SX-F), a cross-country bike (350XC-F) and a trail bike (350XC-W). All three share the same frame and basic engine design, but differ in equipment and state of tune. In performance and weight, the SX-F and the XC-F are nearly identical—both are imported as closed-course-competition bikes in full-race mode. The XC-W and EXC-F, on the other hand, must conform to a variety of U.S. governmental agencies. Both are quiet and meet emission standards, forcing some level of compromise. The emission standards, as it turns out, aren’t so tough. That’s just a matter of EFI settings and measures to keep gas fumes contained. The noise standard is tougher. The muffler is, of course, job one. There’s also tire selection, because the standard involves a ride-by test. And then, because intake noise is a contributing factor, the 350EXC-F also has a reed valve in the air boot between the filter and the throttle body.

There are a number of other EXC-F-specific components that have nothing to do with the government. It uses a WP XPLOR 5548 coil-spring fork and shock. The triple clamps are forged rather than machined. The swingarm is one cast piece, and there are variations in bits and pieces here and there. There’s no map switch on the handlebar, so there’s no traction control. But, most of the important parts are the same. The EXC-F has Brembo brakes, a Brembo hydraulic clutch, Neken bars, Excel rims, Galfer discs and a D.I.D O-ring chain. The tires are Continental TKC80s, which are good on the street, but not in the dirt. Before even riding the bike, we traded them for STI Tech 2 DOT knobbies, which are good in the dirt but not on the street. It’s just who we are. We also installed the rim locks that come à la carte with the bike and balanced the wheels.

DIRT TRANSITIONS
The one thing that really sets the 350EXC-F apart from all the dual-sport bikes of the past is its weight. On our scale, it weighs 239 pounds without fuel, but with mirrors, a license plate and all the mandatory street gear. This is what a real dirt bike should weigh. A full-race Yamaha YZ450F is about the same, and many full-time off-road bikes are heavier.  The KTM 350EXC-F is actually the lightest full-size dual-sport bike you can buy in the U.S. Even entry-level dual-sports like the KLX230S are around 300 pounds.

You can also make an argument that a 350EXC-F with good tires is a better trail bike than even the SX-F or XC-F competition bikes. Both of those bikes make more power but don’t give you much else. First of all, the EXC-F has plush suspension that makes it much easier to cope with long rides. The XPLOR fork has a great range of adjustability through top-side clickers. On low-speed trails at moderate speed, the front end sucks up rocks and roots without issue. It can’t do miracles, though. If you dive into deep whoops and hold it wide open, you’ve transitioned out of the trail-rider category and are expecting race-bike performance. The fork will bottom and dive no matter what you do. In the rear, the EXC-F uses PDS no-linkage suspension. It’s still the gold standard of off-road suspension designs for a number of good reasons. First on the list is ground clearance. If you pop over a log, you won’t get hung up on the linkage. There’s a large contingent of off-road guys who also insist that PDS action is more consistent, predictable and provides better traction than linkage suspension. We can’t say that we’re that devoted to the design, but we do feel it’s better in most off-road situations. Just like the fork, though, the 350’s rear suspension just isn’t set up for race-level speeds. Faster paces will require a trip to your local suspension tuner and perhaps heavier springs.

Other features that make the EXC-F so good on the trail include a radiator fan. That might not sound like a big deal, but it is. If you take a 350XC-F on a tight trail in the summer, it will eventually boil over. The EXC-F runs a little hotter in normal conditions because of the lean fuel mixture, but the fan automatically kicks on when it gets too toasty. We also like the 6-speed gearbox; it’s clearly better than SX-F’s 5-speed. The 350XC-F and 350XCF-W both use the same 6-speed gearbox and even the same final gearing. First gear is about perfect for tight trails—not too much of a granny gear, which is a common problem for 6-speeds. You might even want to gear up a little. The stock 52 rear sprocket means you’re screaming at 65 mph. You can get away with a 48-toother and still have a decent overall spread. Most of all, we love the fact that the EXC-F is so quiet. This has become essential for trail bikes. Not only does the super-quiet exhaust allow you to ride for days without inviting a headache, but it allows access to riding areas where load bikes just can’t go.

WHAT ABOUT POWER?
That’s the sore point with the 350. It’s nowhere near as powerful as the other 350s in the KTM line. This is a direct trade-off for the quiet exhaust. At extremely low rpm, it runs fairly well. The power is smooth without any of the backfiring or hesitation you usually get from lean bikes with restrictive exhaust systems. We consider that a major win. But, as the revs climb, you never get a rush of acceleration. The EXC-F just climbs up to its peak in a sedate, linear fashion. Then you shift. This isn’t the kind of output that earned the 350SX-F the right to go head to head with 450 motocross bikes. It is, however, the kind of power that gets the job done in most off-road situations.

That, of course, means that people will be drawn to the aftermarket looking for more power. There are no easy solutions there. If you install a competition exhaust, you’ll quickly find that it makes the bike run worse, not better. The fuel mixture is calibrated for the stock silencer, which is very restrictive. Then you have to figure out a way to alter the fuel map, which is deliberately difficult. There are a number of products out there for that. The next stop is the reed valve in the air boot. It’s a fairly big restriction. If you take it out, most of the restriction is still there due to the shape of the air boot. Some riders use a European air boot, which is, once again, difficult to find. Then, if you spend a great deal of money on suspension, you will eventually have a good race bike—one that will have cost you considerably more than a standard 350XCF-W.

This entire course of action is frowned on by virtually everyone. The Highway Patrol doesn’t like it, aftermarket companies don’t like it and KTM doesn’t like it. Heavy fines have been laid on companies that didn’t follow the rules just right. There are Volkswagen executives you can ask—but you have to talk through the bars.

All of that is to say that the KTM 350EXC-F does what it does very well. It’s a street-legal dirt bike that’s more than competent off-road; it’s excellent. It isn’t, however, a race bike. Sometimes, you simply gotta admit when you’re being greedy and move on.