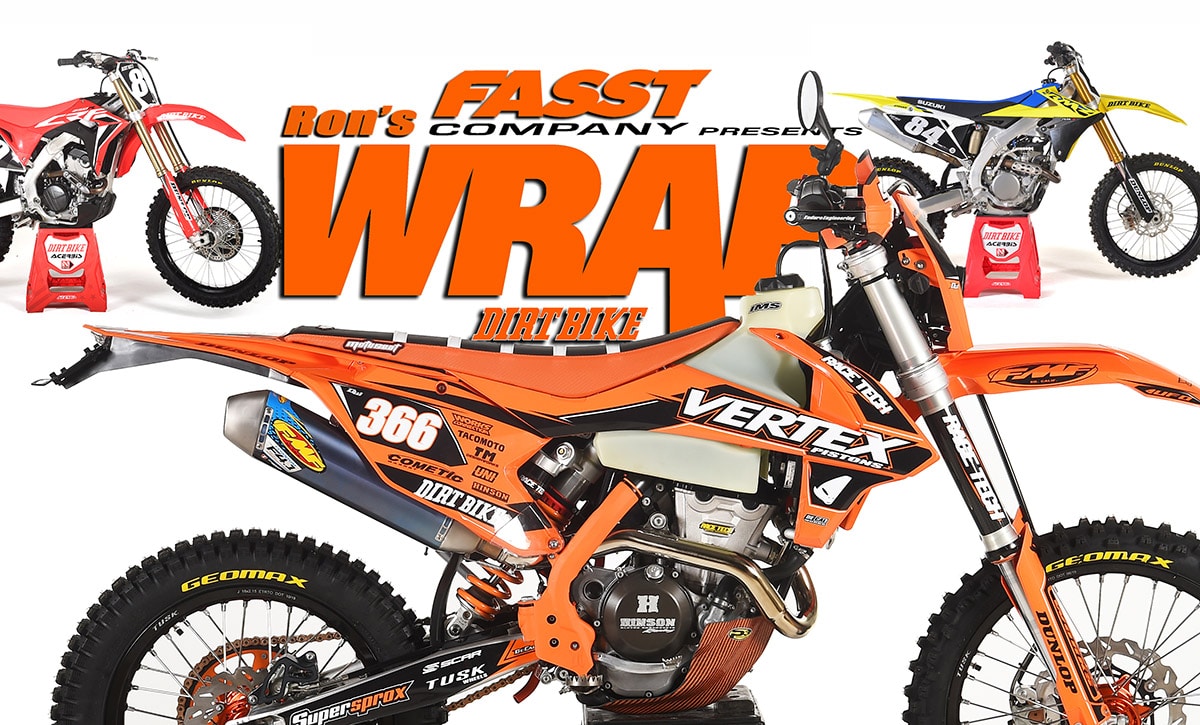 Share FacebookTwitterGoogle+ReddItWhatsAppPinterestEmail
We have a few different dual-sport projects at various stages of completion right now, but  this 2017 KTM 350EXC by Jay Clark is absolutely wicked.  Jay is a  rep for Dunlop, PivotWorks and about a half dozen other companies, and he builds more project bikes than any man alive in order to promote his clients. This, however, is a personal bike that he built for himself and his son. He decided to start with a 350 instead of a 500 mostly because he likes smaller bikes and Cylinder Works has a 366cc big bore kit for it. Race Tech did the motor and dyno’d it at over 50HP.  The stock unit is very corked up with only 34HP.  You need to keep in mind that when you mess with the ignition or exhaust on a dual-sport bike you are essentially turning it into a closed course vehicle. That didn’t bother Jay. 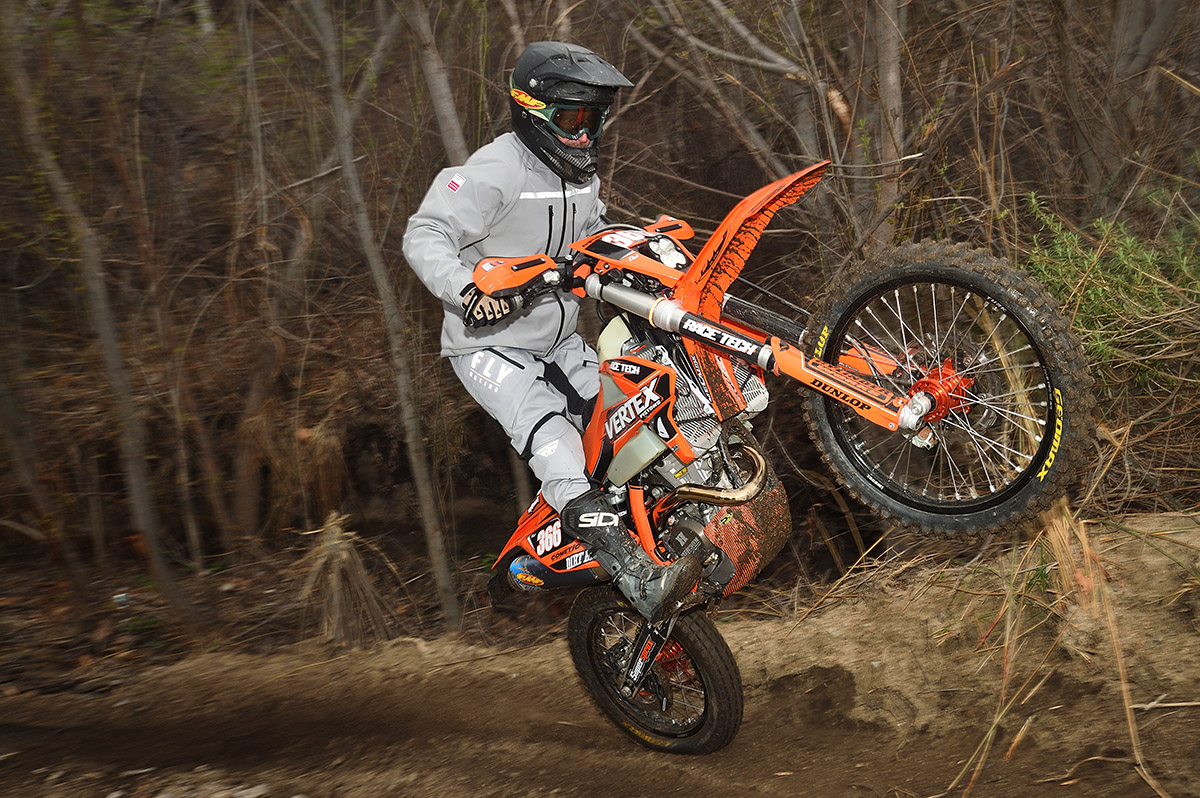 A Super Mount V2 from Moto Minded helps organize the heap of wires behind the front headlight. It also moves up the speedo up 1.5”  so you can actually see it over the bar pad.  The blinkers and tail light  were custom set ups and from Taco Moto with blinker relays.   SAR Off Road makes a number of plug-and-play items for the KTM EXCs, which make a big difference for projects like this. Their switches for the lights and blinkers are slim enough to free up bar space and allow you run the clutch perch where  you would like. The same goes for the front brake side with the starter/kill switch. 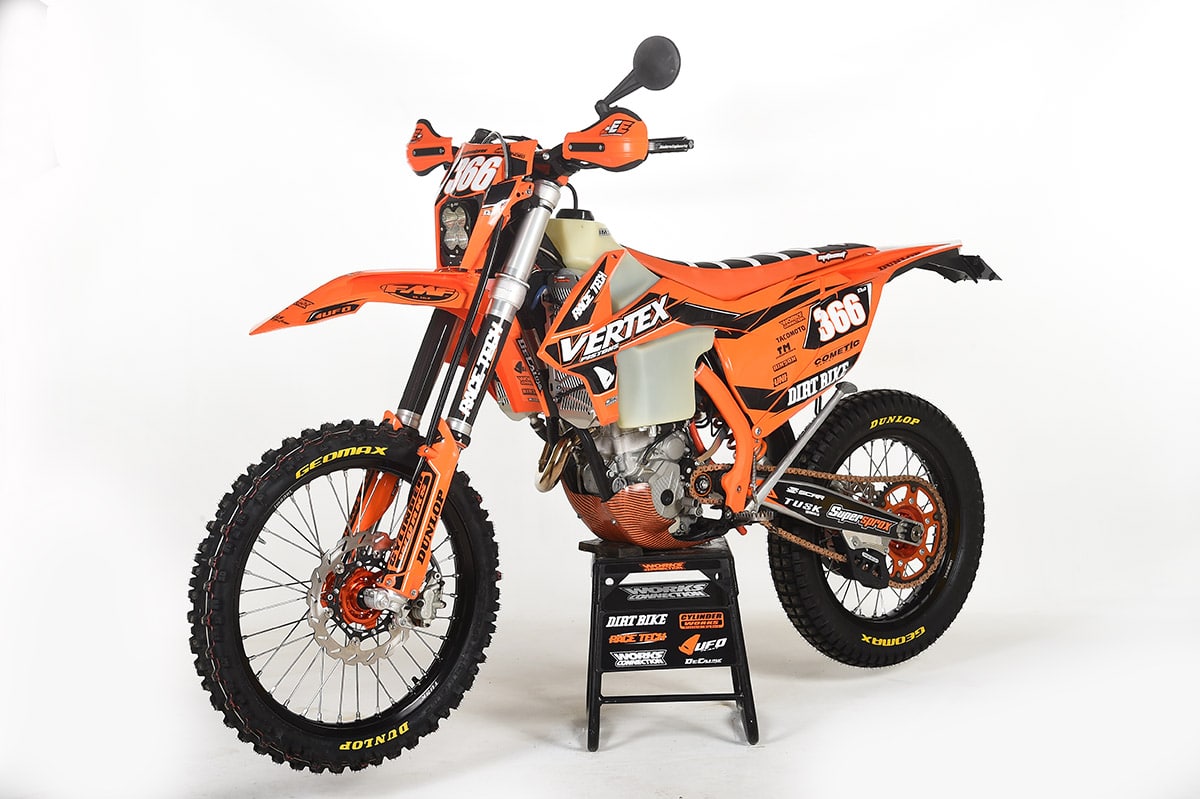 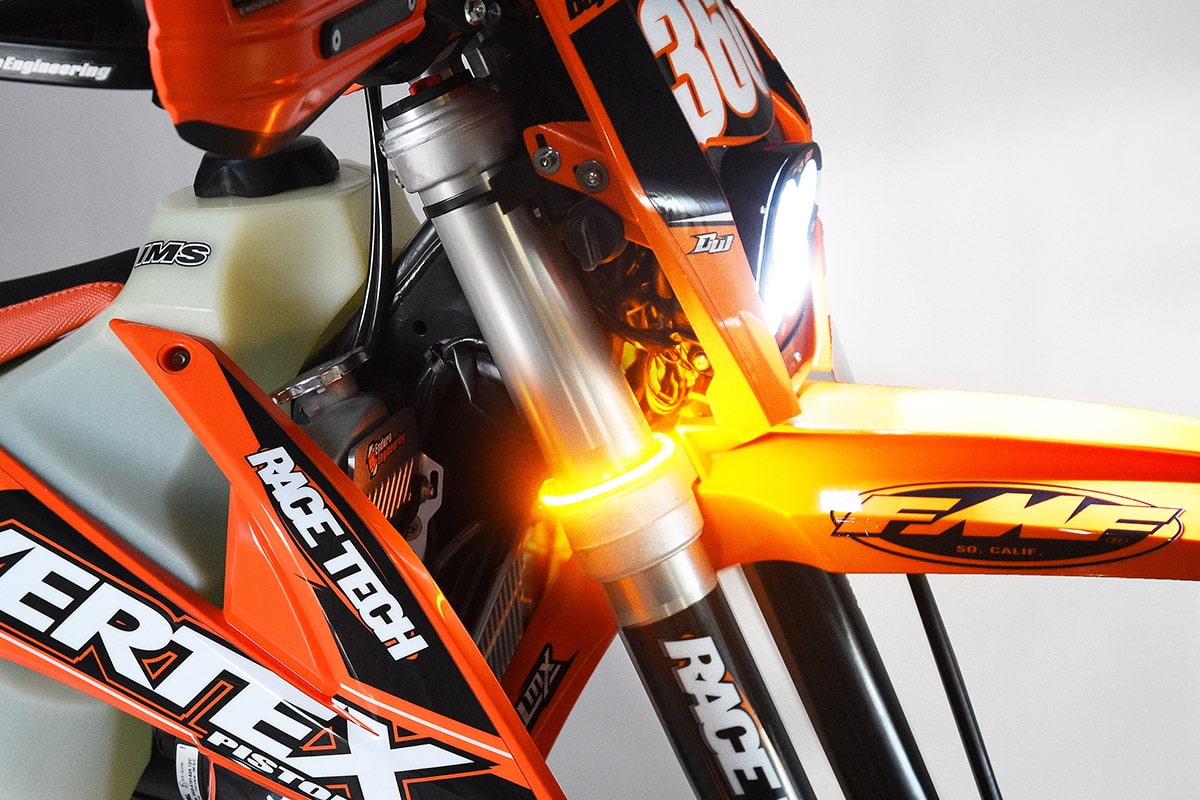 Taco Moto Co.  makes these Fork Wrap plug-and-play front turn signals, which have running lights. They probably aren’t DOT legal in all states, but they get the job done cleanly.  They also make a closed-course smog delete kit, a crankcase vent hose kit, a  rear fender Tidy kit with an integrated brake light/blinker combo and a LED turn signal relay. The headlight itself is a Squadron Pro from Baja Designs. 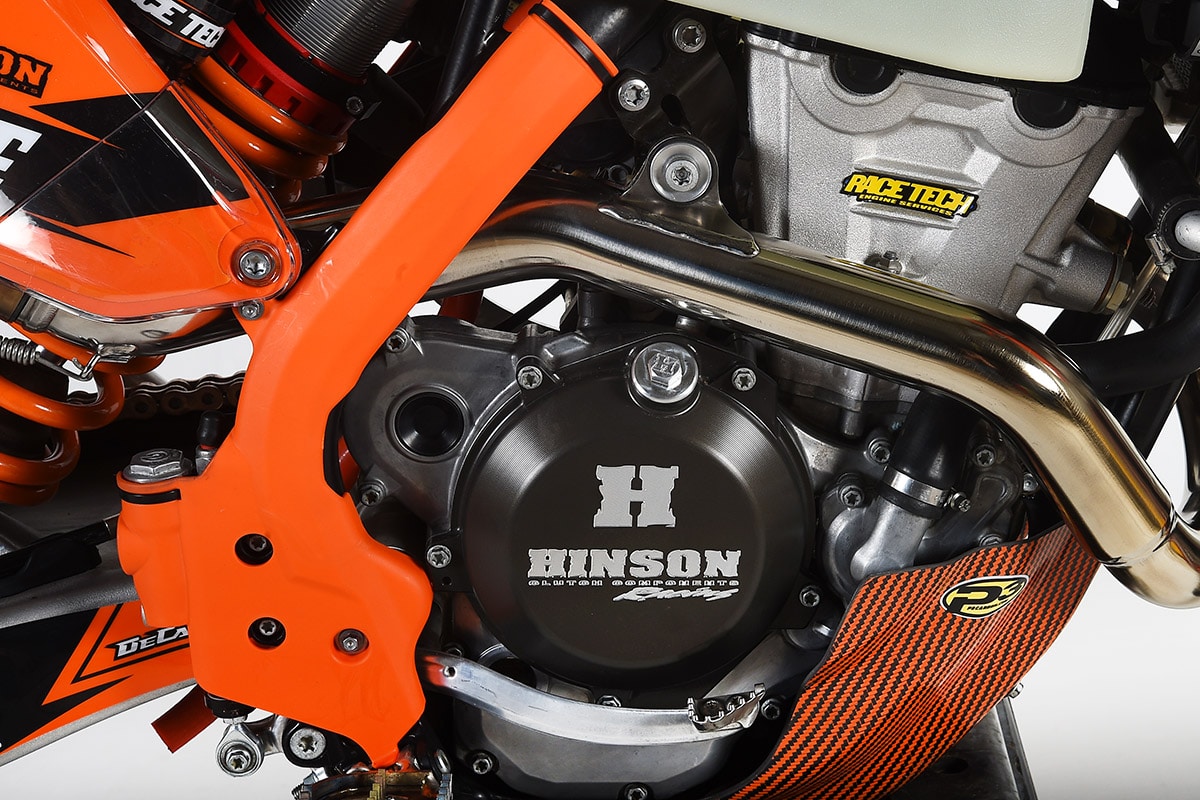 The Cylinder Works big bore kit is the heart of the motor rebuild. The kit has a 2mm oversize Cylinder, pushing the displacement to 366cc . It includes a forged Vertex Piston and top-end gasket set. Other gasket are from  Cometic.  The entire motor was rebuilt in Race Tech‘s engine shop. They ported the head and installed a Vortex X-10 ECU. Race Tech also revalved the suspension at both ends.  The clutch plates and the outer cover are from Hinson. 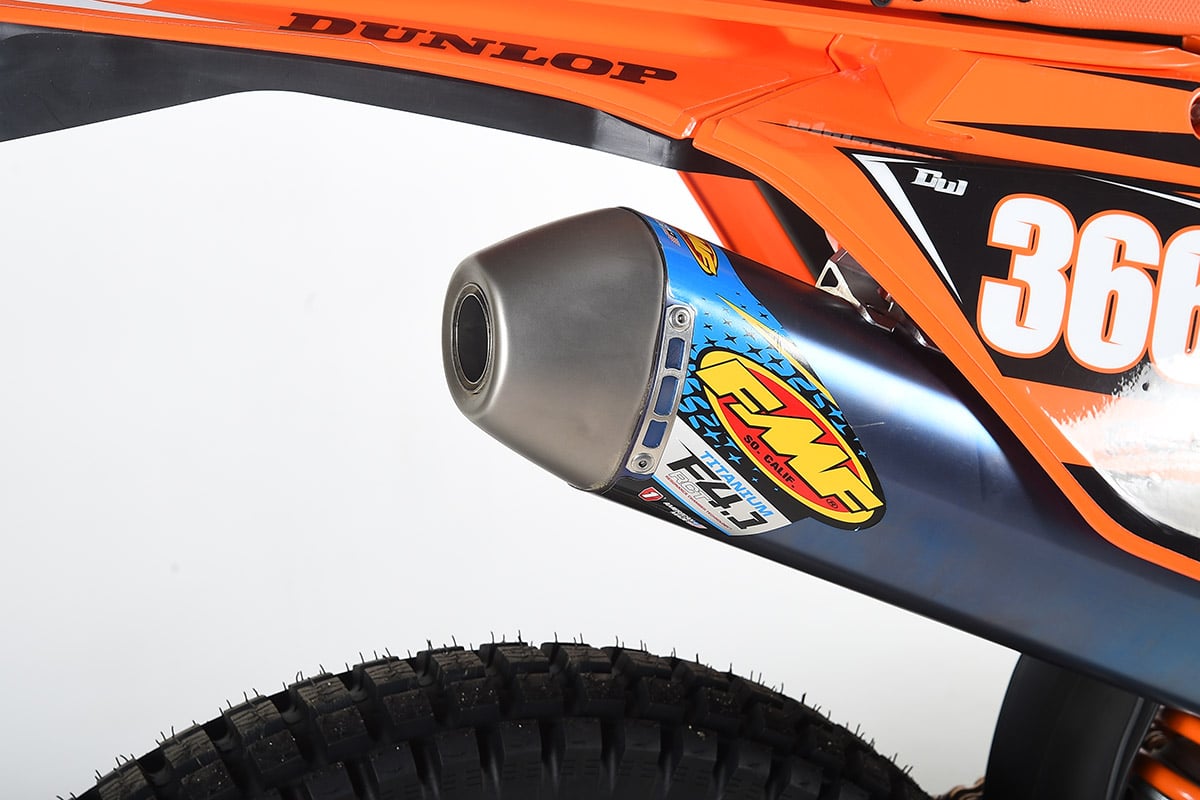 The bike is, of course super quiet in stock form. Jay didn’t want to give that up entirely. The FMF Alum F 4.1 RCT muffler isn’t as loud as some full-race mufflers. But you’re still going to attract more attention than you would with the stocker.  At the other end, a Euro-spec air boot was used between the throttle body and the air filter. This eliminates the reed. 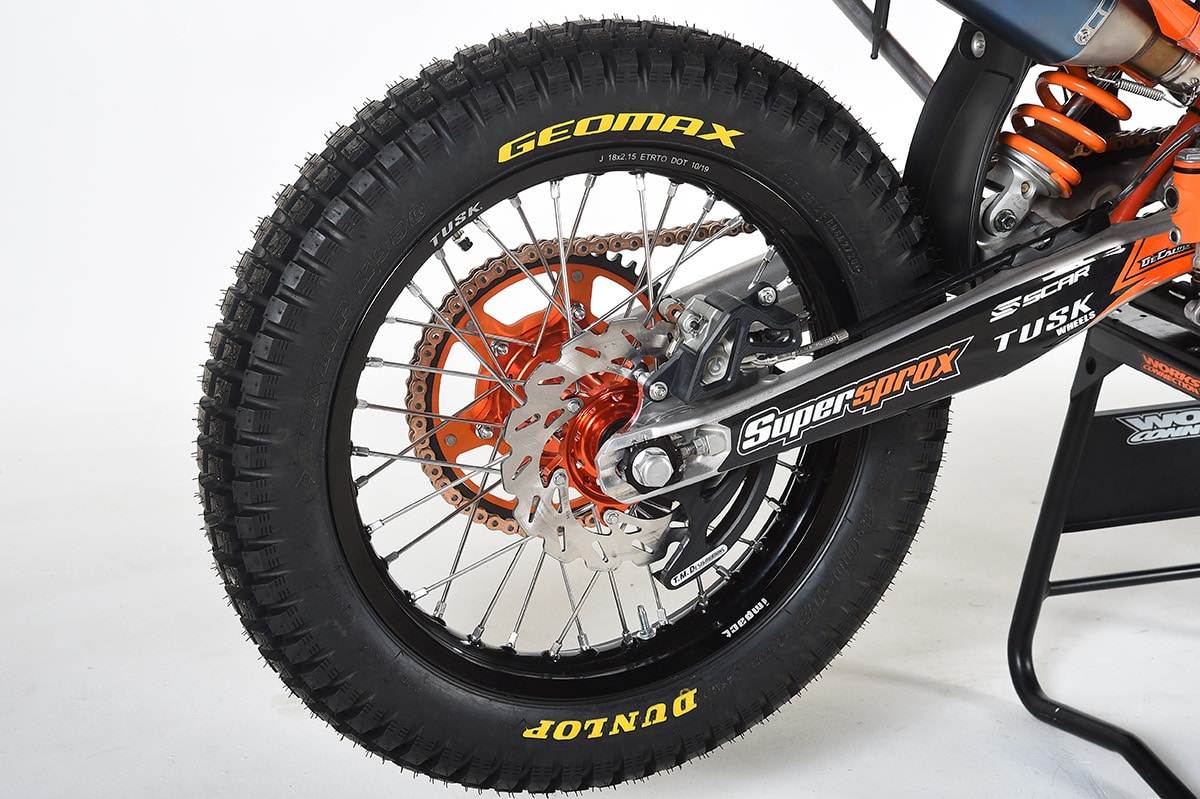 The kind of off road riding that Jay does isn’t wide-open across the desert stuff. He has a mental catalog of Southern California riding sports that are generally technical.  Most of them are semi-legal, but staging is always difficult. That’s why he needs a dual-sport bike. Of all the Dunlop tire products that he has access to, the go-to tires for his particular brand of riding are theAT81 in front and the K950 in the rear. The K950 is a DOT-approved trials tire. The wheels are from Tusk, which is the in-house brand from Rocky Mountain MC ATV. Tusk was also used for the brake rotors at both ends (oversize in front) and all the brake and sprocket hardware.  A TM Designs rear chain guide was used with TM rear brake rotor and caliper guards. The sprocket is a SuperSprox Gold Stealth  51-toother. A 14-tooth countershaft sprocket is up front. 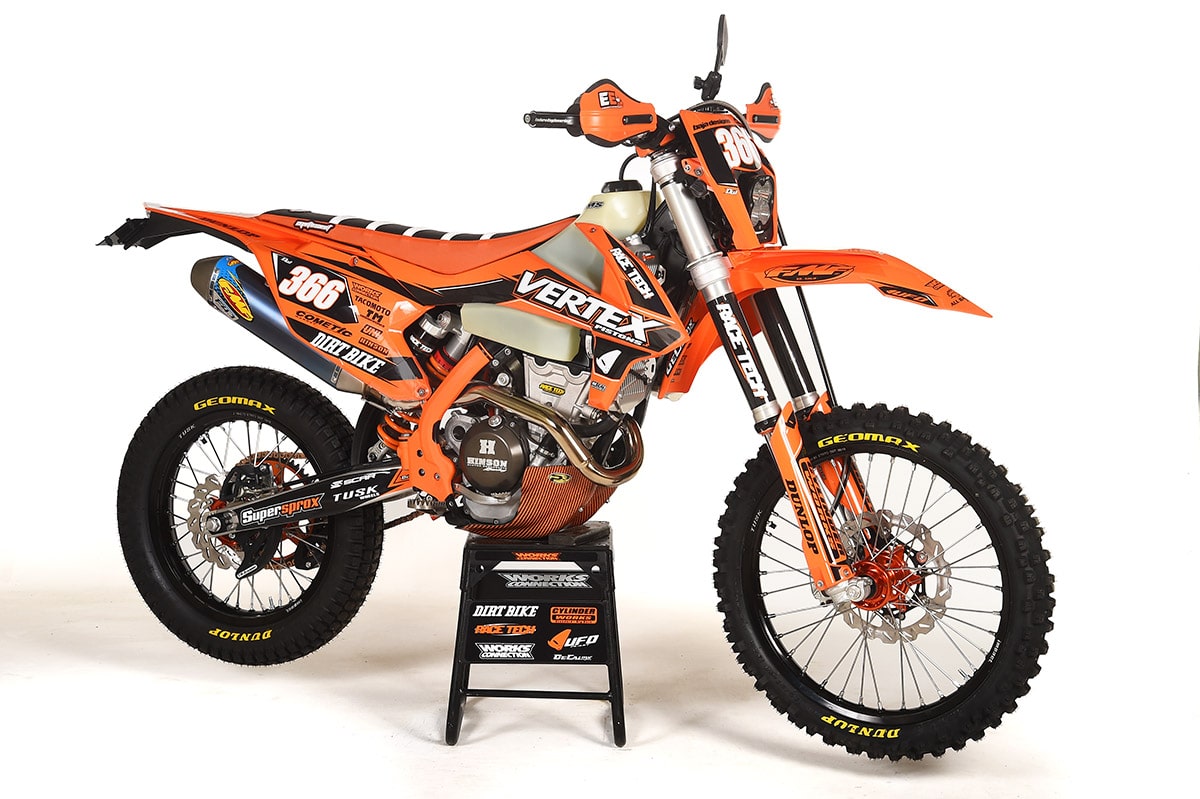 More odds and ends: the tank is an IMS product that holds 3.2 gallons. IMS also made a coolant catch can.
For the footpegs, he used Scar Racing  titanium jobs.  The list of stuff from Works Connection has a number of items:

Decal works did Semi-Custom Graphics kit with pre printed number plates backgrounds  and Graphic Guards over UFO plastic bodywork. Uni Filter has a Two-Stage filter under the seat, which has a Moto Seat cover. Also in there is a Fire Power Battery. 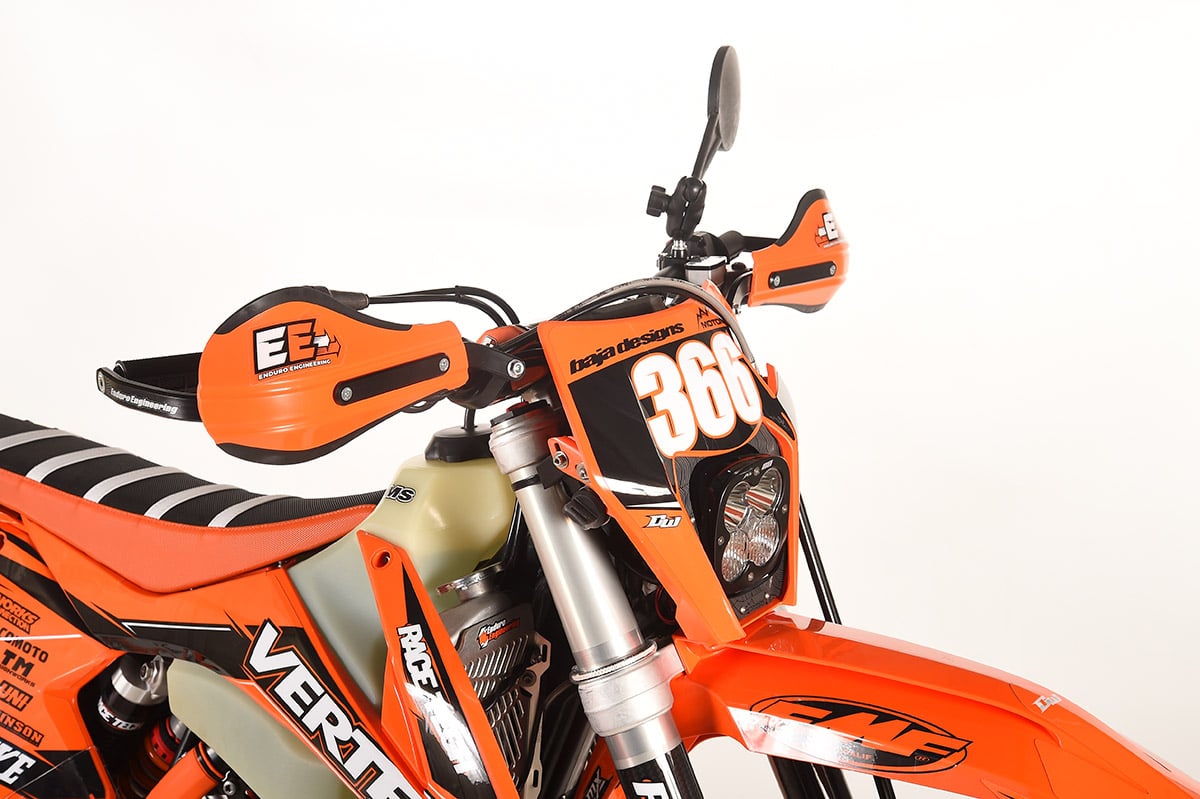 The bars are decked out with Enduro Engineering handguards, who also supplied the radiator guards. The fold away mirror is especially cool. It’s from DoubleTake Mirrors. The handlebar is an ODI Champ, equipped with ODI lock-on grips. 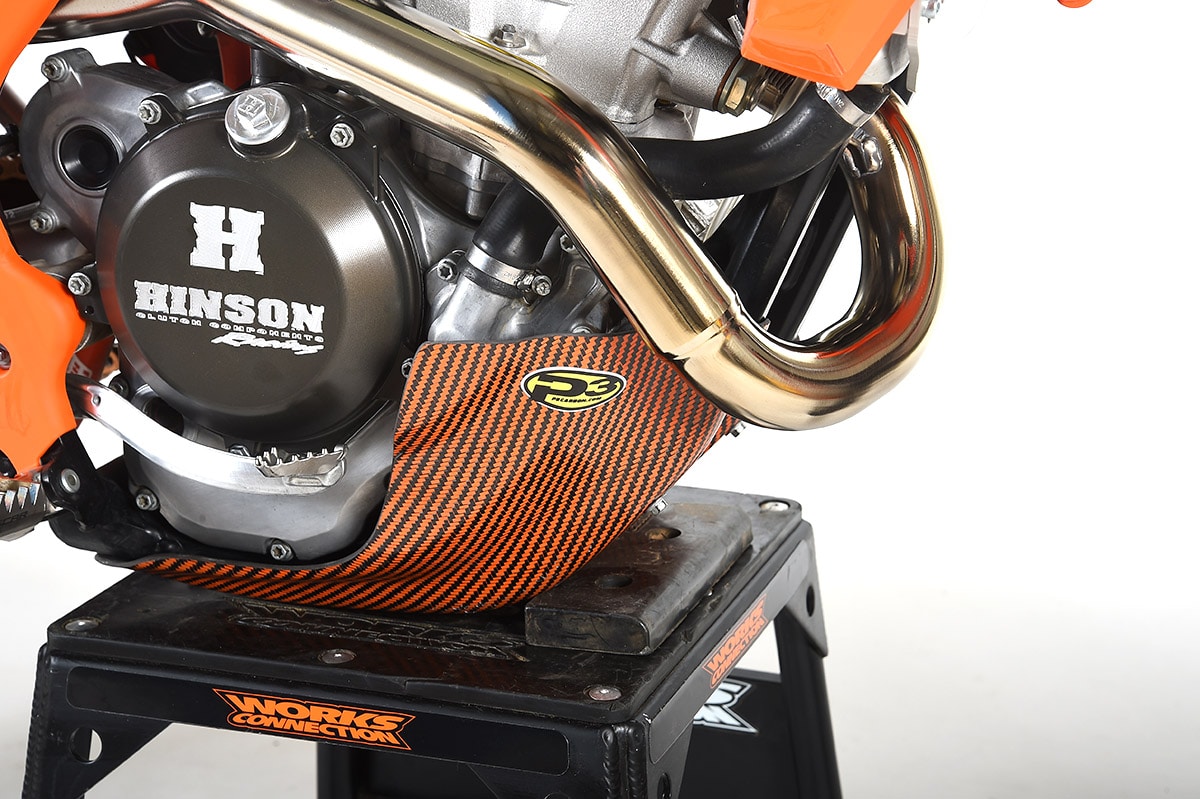 Under the motor is a massive skidplate from P3 Cabon.  More protection comes from Bullet Proof Designs in the form of a rear Swingarm guard and front shroud rubber straps. 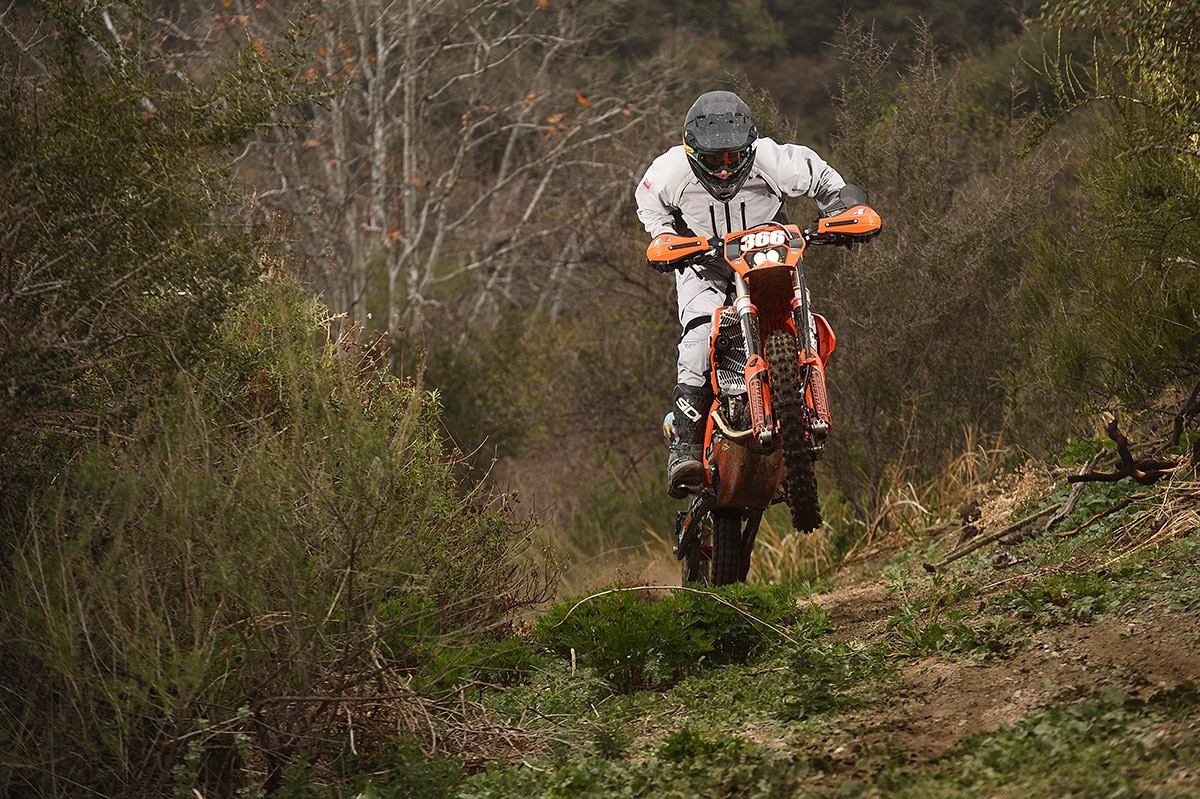 That’s a big project with a lot of stuff. Jay always does a very thorough job, and he went especially overboard with this project because he made it for himself. For now, though, we have the bike and we probably won’t give it back until the story appears in the May, 2021 print issue. 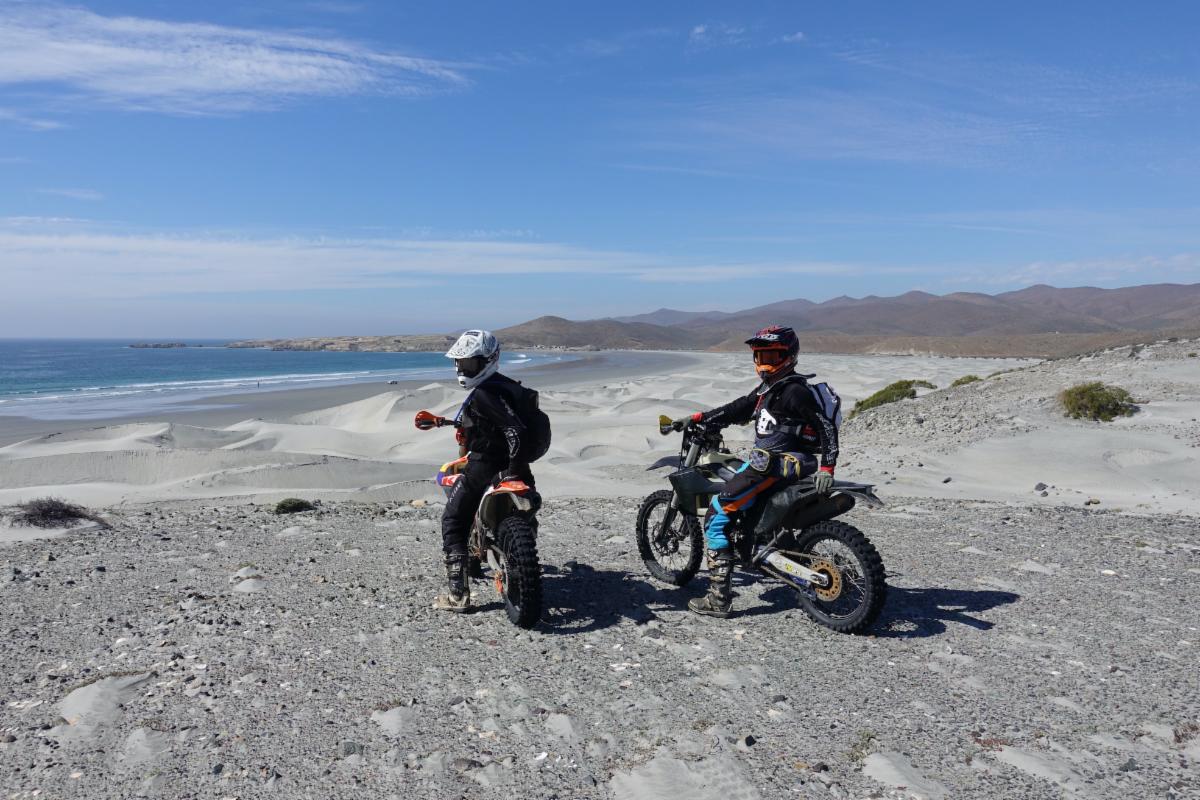 The guys at Malcolm Smith adventures let us know there are a few spots open for their Annual Baja Ride, starting on April 10th. Here’s what they have to say: “We just returned from the 2021 No Wimps in Baja and crossing the border in both directions was just like normal, with the exception that everyone is wearing masks. Once we passed through the border, it was clear that the hotels and restaurants in Baja are taking the pandemic very seriously. Everyone we encountered was wearing a mask and there was lots of cleaning and sanitizing happening at nearly every stop. In general, the small towns where we pass through have had very few if any cases of Covid. Personally, I am more excited than ever to get down to Baja and ride my motorcycle. The pandemic has certainly added a level of stress to all of our lives, and I know for certain Baja in the answer.” 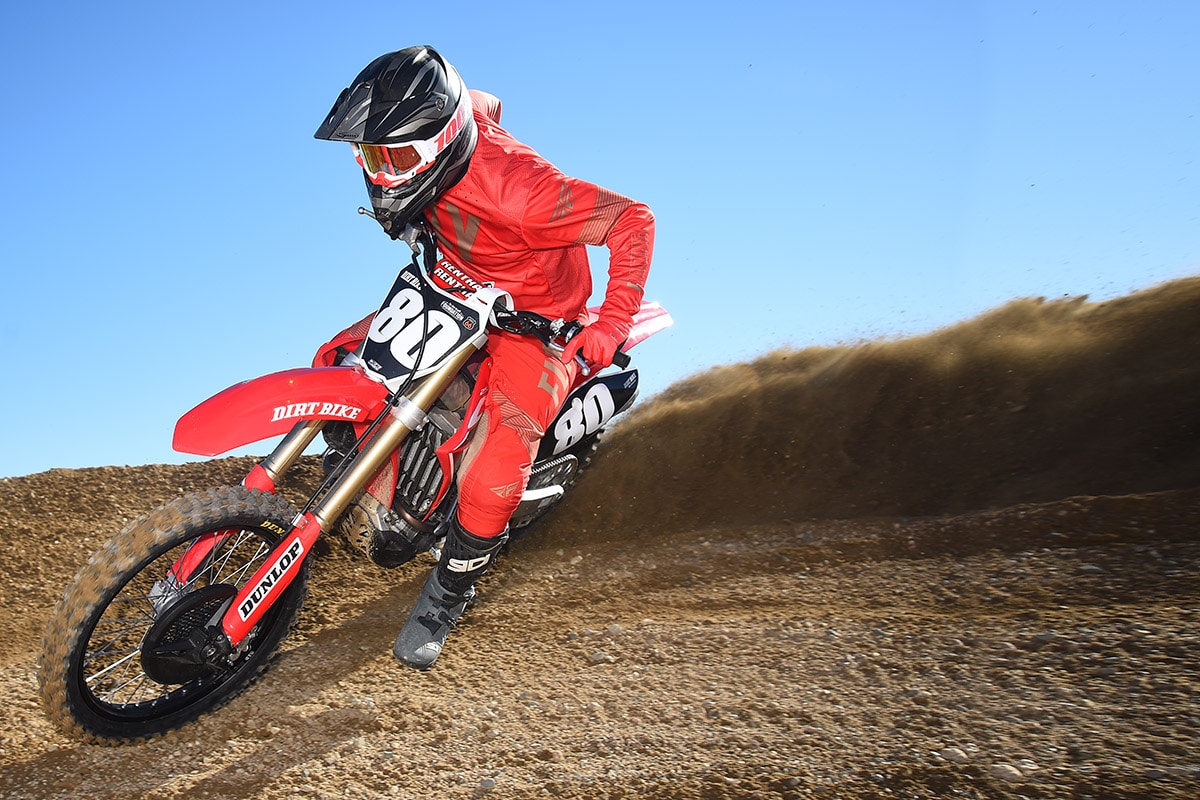 The Honda CRF250R was our favorite 250 motocross bike in 2020. It’s unchanged for 2021, so we didn’t print a full test this year. But we do have one in preparation for our 2021 250 shootout, so we thought we should provide a brief overview of the bike. This has the same chassis as the 2020 CRF450R  with a coil-spring Showa fork and a hammer-head-shaped Showa shock. It still has twin pipes and a titanium fuel tank. The left side of the handlebar has a map switch that lets you choose from three different maps or access launch control. The Honda’s strongest point is its overall handling. It’s hard to find anyone who doesn’t love the way it turns, fits and feels. It’s not especially light, at 227 pounds without fuel, but you would never know. It has light, easy steering and is surprisingly narrow, as long as you don’t obsess on the twin pipes–which long-legged riders might occasionally notice. 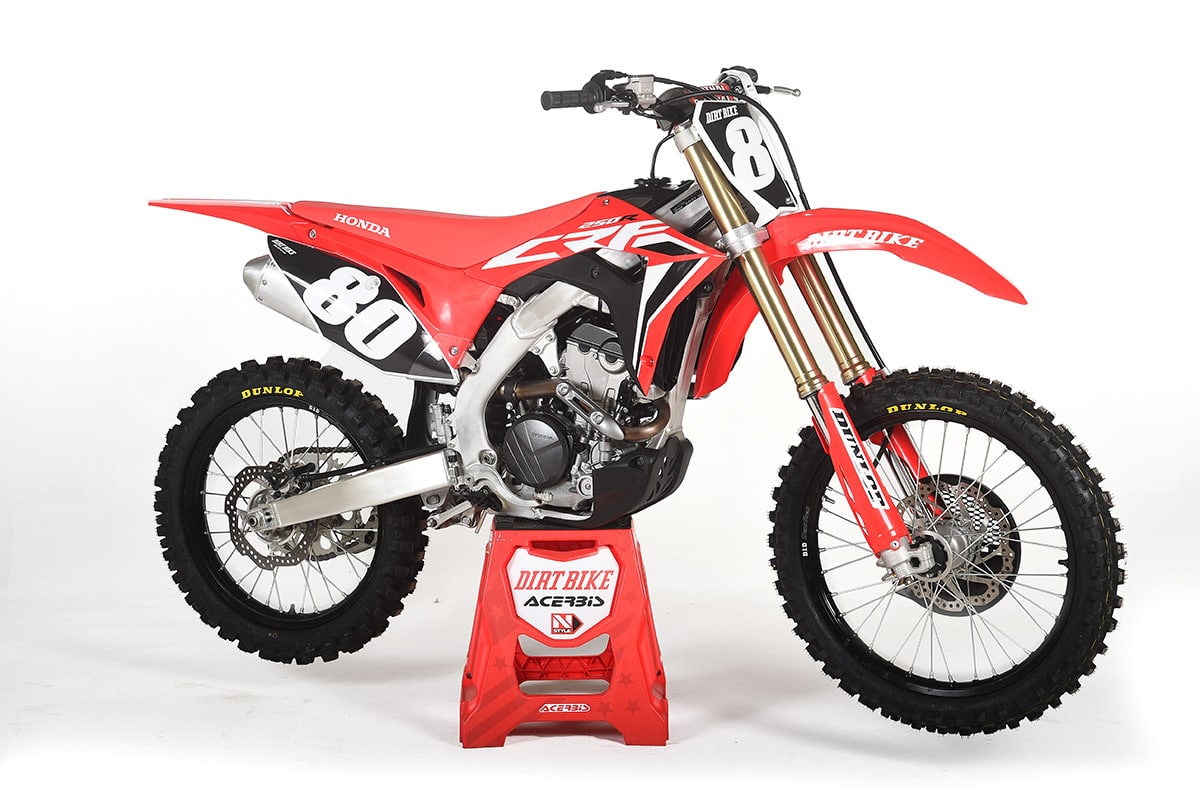 The one area where the Honda truly shines is overall comfort. It’s a bike that just feels right, no matter who you are. The levers, the seat, the bar bend–everything is just right. The Honda is also very fast on top. That might not mean as much this year because the Kawasaki and the KTM-powered bikes are also powerful. They’re all screamers. In the last four years, the whole class has stepped it up in the power department. Sadly, most have lost power down low; especially the Honda. It doesn’t even get serious until 9000 rpm. For some riders that’s a big issue, although most 250F riders have learned to rev it by now. Overall suspension is another strong point for the Honda, but once again, it has competition in that area. Job one is taking hits, and the CRF250R is great in that category, although some riders complain it can be a little nervous at speed. Overall, though, we still love the Honda and at $7999, it has the second lowest price in the class–the Suzuki is $7899.

SPEAKING OF THE SUZUKI 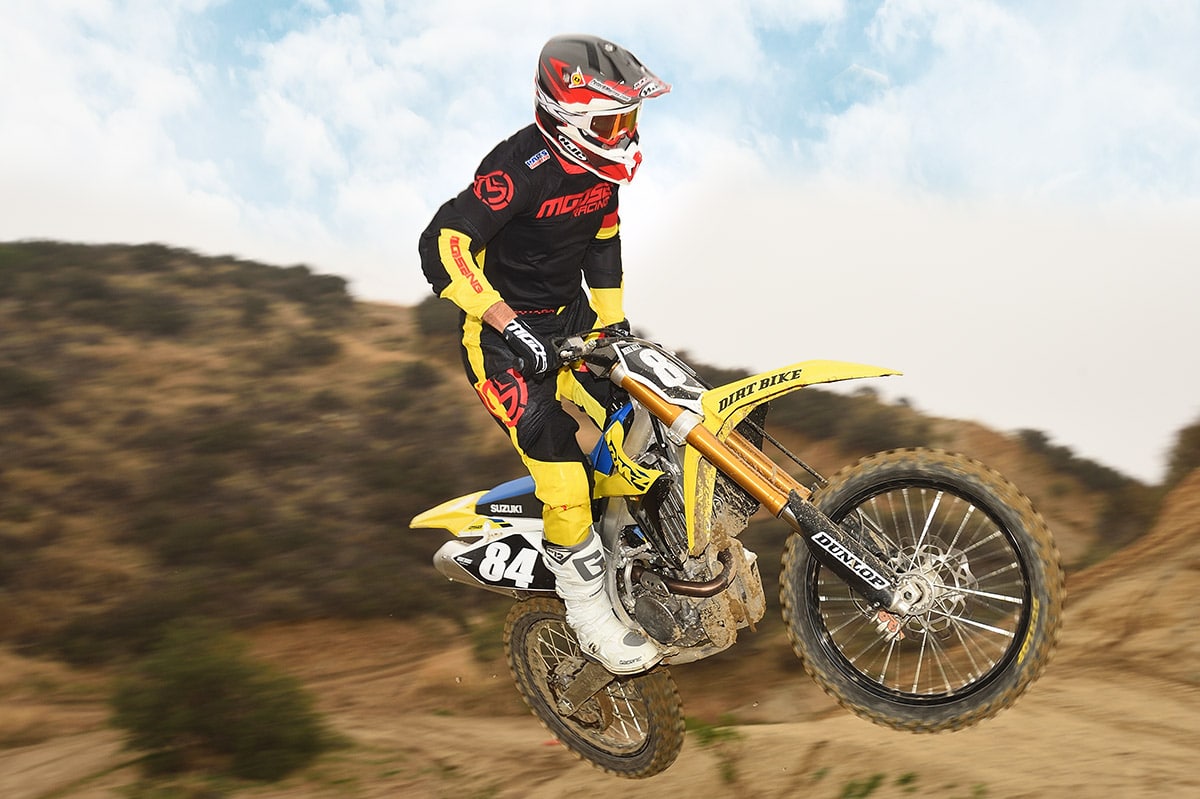 The Suzuki RM-Z250 is another unchanged model for 2021. It didn’t get a full test in print this year, so here’s a background on it: Suzuki knows that the RMZ250 hasn’t had any big changes in a long time. But for now, that means that it has a legitimate segment of the market all to itself. It’s a simple bike for the MX purist. It has no electric start, so it has no battery, no regulator and no complex wiring harness. Plus, it’s torquey and easy to ride. One by one, all the others have re-aimed their bikes at the top of the market with high-revving motors that demand more effort and commitment. The Suzuki doesn’t have to be screamed and wringed out, so novices and beginners will find it easier to ride. 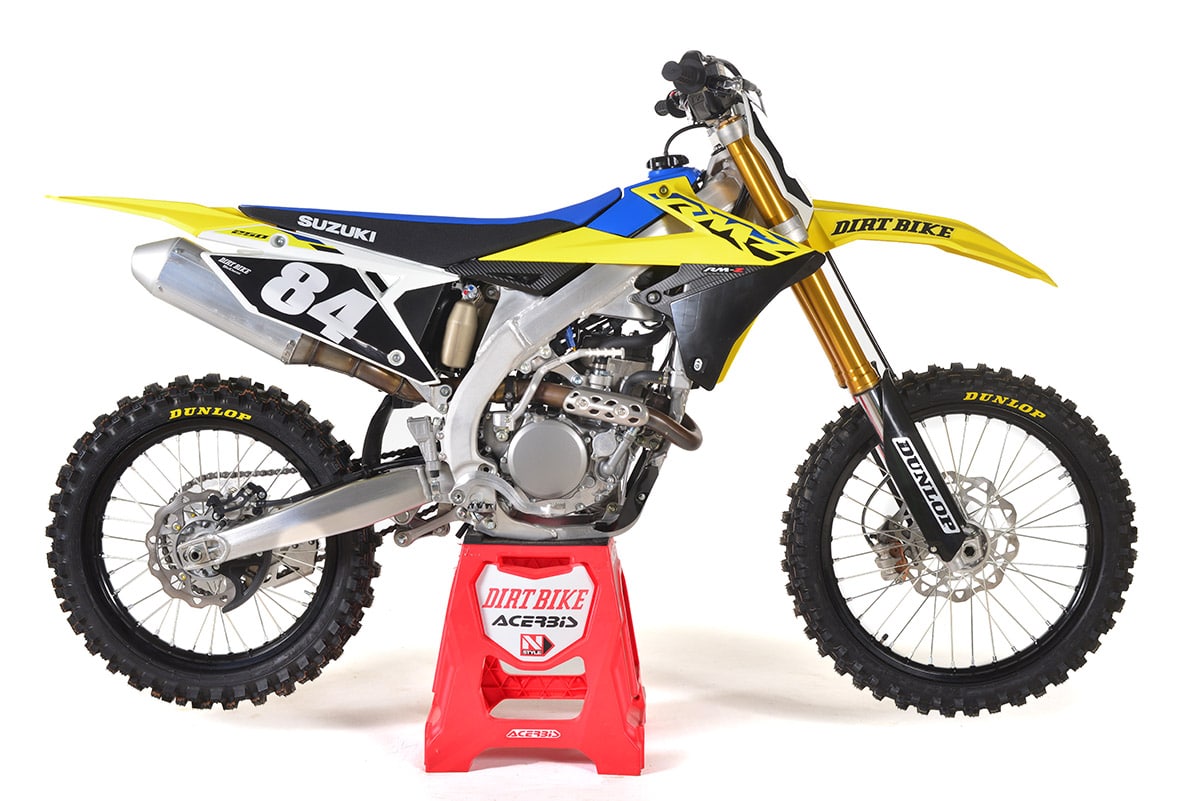 Still, the fact remains that it gives away a good 5 horsepower on top, which is disaster for racing in more advanced classes.  It’s also a bike that handles exceptionally well. Back in the day, Suzuki was famous for excellent turning prowess. It still ranks well in that department, but several of the other makers have cracked that code. The Suzuki is no longer the best handling bike in the class. Part of that is due to weight. Despite having no electric start, it has no particular advantage there. It weighs 227 without fuel; the same as the Honda and Yamaha. The current generation of the RM-Z is also a little unbalanced, with oddly soft rear suspension. We don’t mind when a bike goes unchanged, but Suzuki should have stopped one generation ago. It is the least expensive in the class at  $7899.