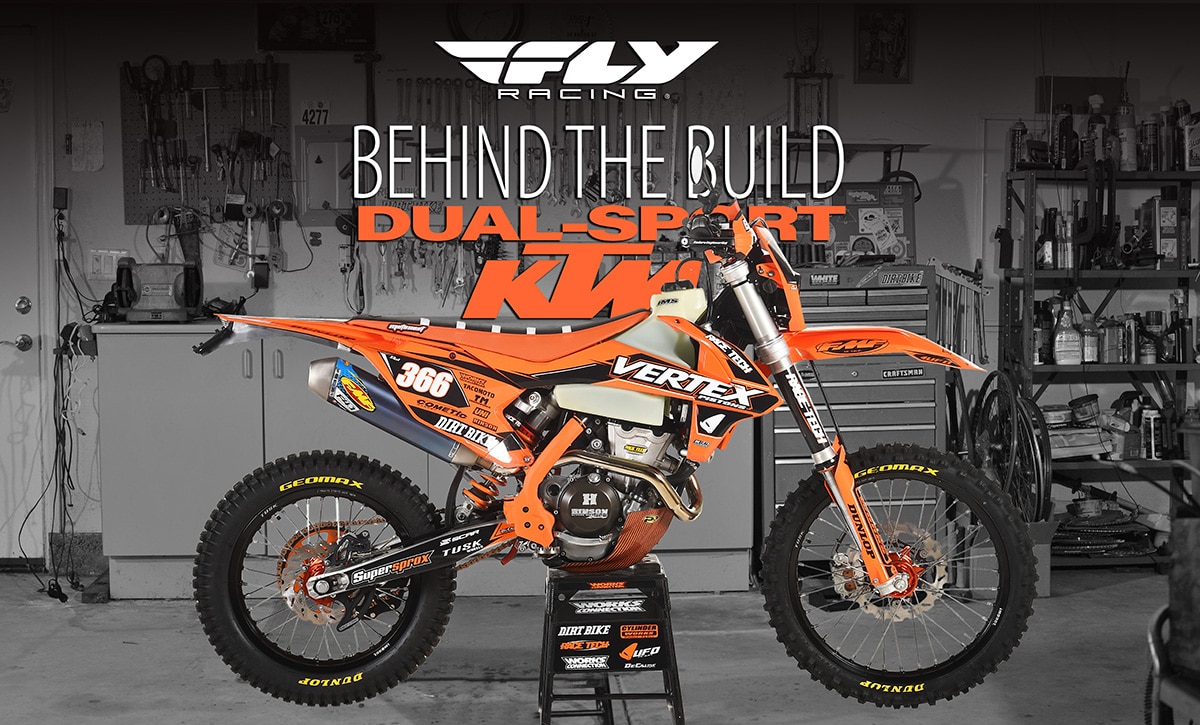 We love the KTM 350EXC-F dual-sport bike. Love it. It’s legal. It’s quiet, and it’s a real dirt bike. What’s not to love? Well, that’s the funny thing about the ones we love. We always want to change them. As wonderful as the EXC is, the truth is that it makes a wheezing 34 horsepower on the dyno. No lie. An average 125 motocross bike makes more, and the 350SX-F motocross bike, which seems to have the same motor as the EXC, makes over 45 horsepower. 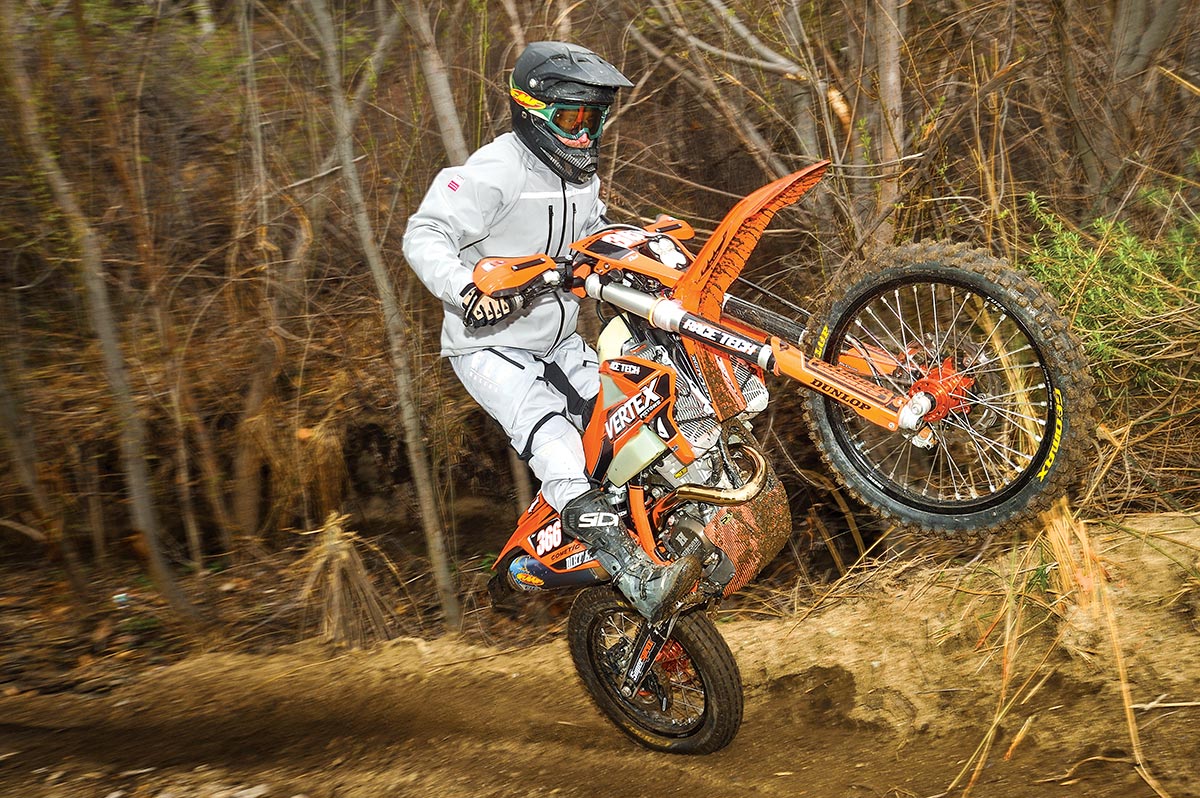 Jay Clark shares our tortured feelings for the 350EXC. He’s a rep for Dunlop, Cylinder Works and about a half dozen other companies, and he builds more project bikes than any man alive. But, more than anything else, he’s a hardcore enthusiast, and he decided to build a 350EXC-F as his personal bike. The real deal-clincher is that Cylinder Works has a 366cc big-bore kit for it. There’s obviously more power to be had. There’s always a bureaucratic issue with the modification of dual-sport bikes, which is different state by state. When you mess with the ignition or exhaust on a dual-sport bike, you might be turning it into a closed-course vehicle. Jay’s main plan was to ride in the mountains of Utah, so he found a used 2017 350EXC-F and went to work.

THE PARTS
Anyone who has worked on any dual-sport bike knows how complicated the wiring can be. Job one was to simplify the electrical system. A Super Mount V2 from Moto Minded helps organize the heap of wires behind the front headlight, as well as move the speedo up 1.5 inches. That way, you can actually see it over the bar pad. The blinkers and taillight were next. Taco Moto in Nevada makes some pretty creative solutions there. The front blinkers are LEDs that actually wrap around the fork tube, and the rear ones are housed within the stock taillight. Taco Moto also has a closed-course smog delete kit and a crankcase vent hose. Again, not all of them are approved in all 50 states.

The guys at SAR Off-Road make a number of plug-and-play items for KTM EXCs, which also make a big difference for projects like this. Their left-side switch cluster for the lights and blinkers is slim enough to free up handlebar space. They allow you to run the clutch perch where you would like. The same goes for the right side with the starter/kill switch.

• Start/stop switch kill button does not lock down)

The headlight itself is a Squadron Pro from Baja Designs, which puts out far more light than the stocker.

THE HEART OF THE MATTER
The Cylinder Works big-bore kit is the heart of the motor rebuild. It has a 2mm oversize cylinder, which pushed the displacement up to 366cc. The kit includes a forged Vertex piston and a top-end gasket set. Other gaskets are from Cometic. The entire motor was rebuilt in Race Tech’s engine shop. They ported the head and installed a Vortex X-10 ECU. Race Tech also re-valved the suspension at both ends. The clutch plates and the outer cover are from Hinson.

The bike is, of course, super quiet in stock form. Jay didn’t want to give that up entirely. The FMF Alum F 4.1 RCT muffler isn’t as loud as some full-race mufflers, but you’re still going to attract more attention than you would with the stocker. At the other end, a Euro-spec air boot was used between the throttle body and the air filter. This eliminates the reed.

The kind of off-road riding that Jay does isn’t wide open across the desert stuff. Most of it is tight and technical. All his spots are legal but have no good staging areas, which is why he needs a dual-sport bike. Of all the Dunlop tire products that he has access to, the go-to tires for his particular brand of riding are the AT81 in front and the K950 in the rear. The K950 is a DOT-approved trials tire. The wheels are from Tusk, which is the in-house brand from Rocky Mountain MC/ATV. Tusk was also used for the brake rotors at both ends (oversize in front) and all the brake and sprocket hardware. A TM Designs chain guide was used with a TM rear brake rotor and caliper guards. The sprocket is a SuperSprox Gold Stealth 51-toother. A 14-tooth countershaft sprocket is up front. 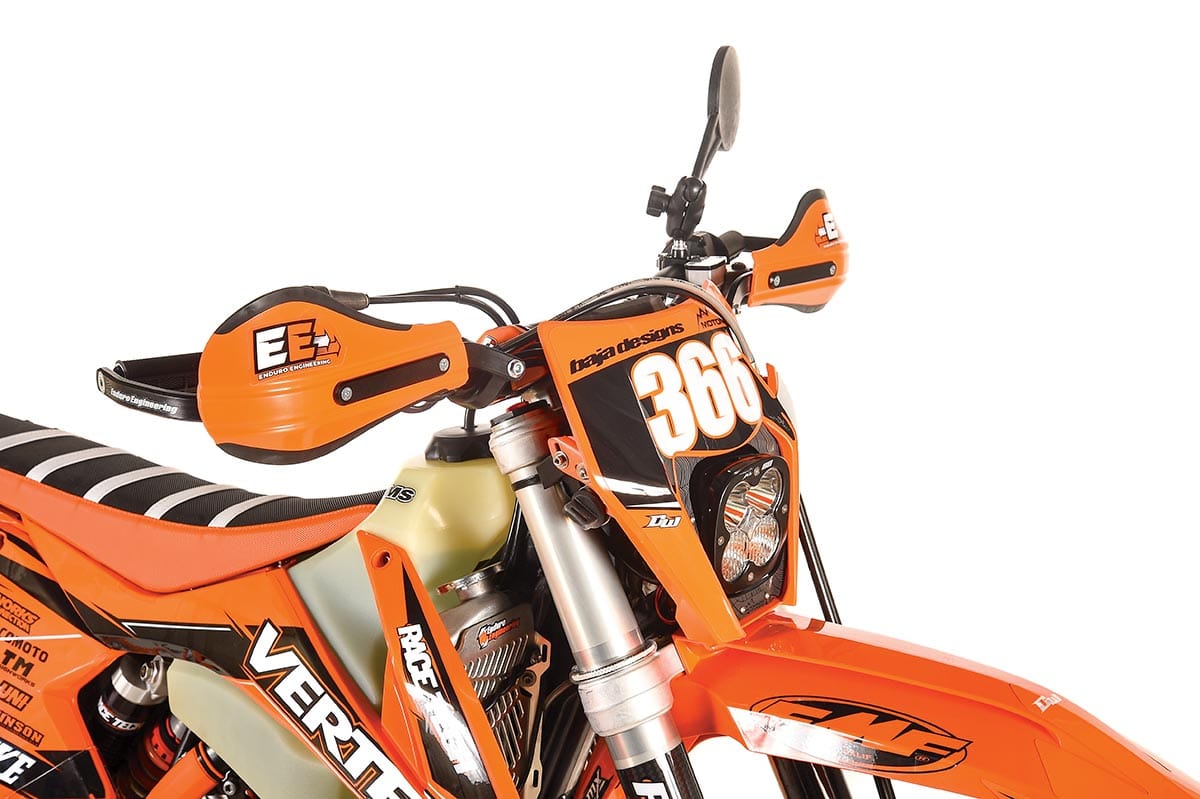 The Taco Moto LED wraparound turn signals are more noticeable than the stockers, but might not pass a DMV check in every state.

The tank is an IMS product that holds 3.2 gallons, which is a gallon more than stock. IMS also makes a coolant catch can. For the footpegs, he used Scar Racing titanium jobs. Works Connection has a number of items for the project:

Decal Works did a semi-custom graphics kit with pre-printed number-plate backgrounds and graphic guards over UFO plastic bodywork. Uni Filter has a two-stage filter under the seat, which has a Moto Seat cover. Also under the seat is a Fire Power battery. The bars are decked out with Enduro Engineering handguards, which also supplied the radiator guards. The fold-away mirror is especially cool. It’s from Doubletake Mirrors. The handlebar is an ODI Champ equipped with ODI lock-on grips. Under the motor is a massive skid plate from P3 Carbon. More protection comes from Bullet Proof Designs in the form of a rear swingarm guard and front shroud rubber straps.

DUAL-SPORT TIME
We rode the 366 back to back with a brand-new 350XC-F, which, of course, is a real competition-only model. Was Jay’s bike just like the XC? Not at all. The XC is a race bike with all the characteristics you’d expect from the breed. Its power was all up top, whereas the power of the EXC was all down low. The 366 would still rev, but there wasn’t any big prize waiting at 14,000 rpm. It was happy to load along, but it still had power to accelerate hard when you twisted it. According to the Race Tech dyno, the 366 produced just over 50 horsepower, but the peak was much lower than that of the 350XC. The finished project wasn’t as quiet as the stock bike, but because the power is so sweet at the bottom, you don’t have to rev it, and rpm is what really makes noise. Unlike some big-bore kits, there was no increase in vibration and it remained easy to start.

This, of course, is a big project, especially if you do it all at once. Our advice is to take it piece by piece. The motor and the ECU should probably be done at the same time. Then you can tackle the electrical system, then the suspension. If you do it right, it will be like getting a new bike every spring. 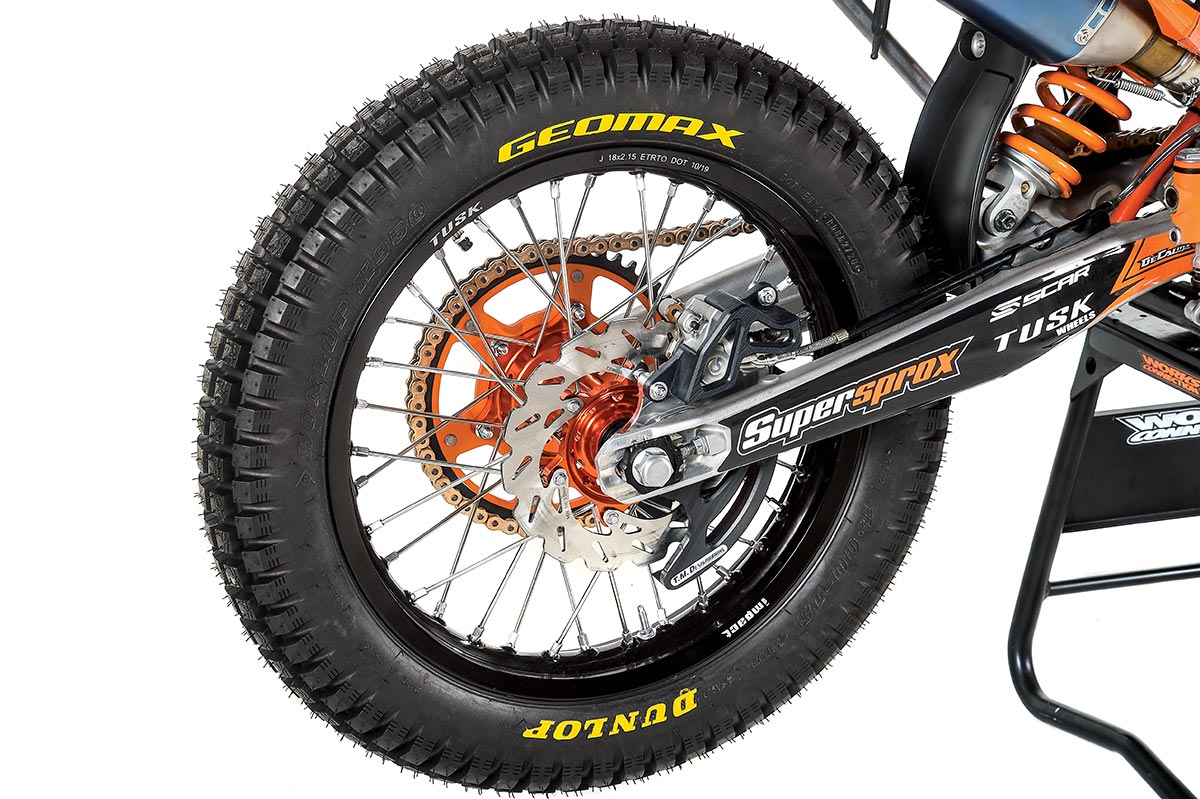 The Dunlop K950 is a DOT-approved trials tire. You will be amazed at how much grip it has.