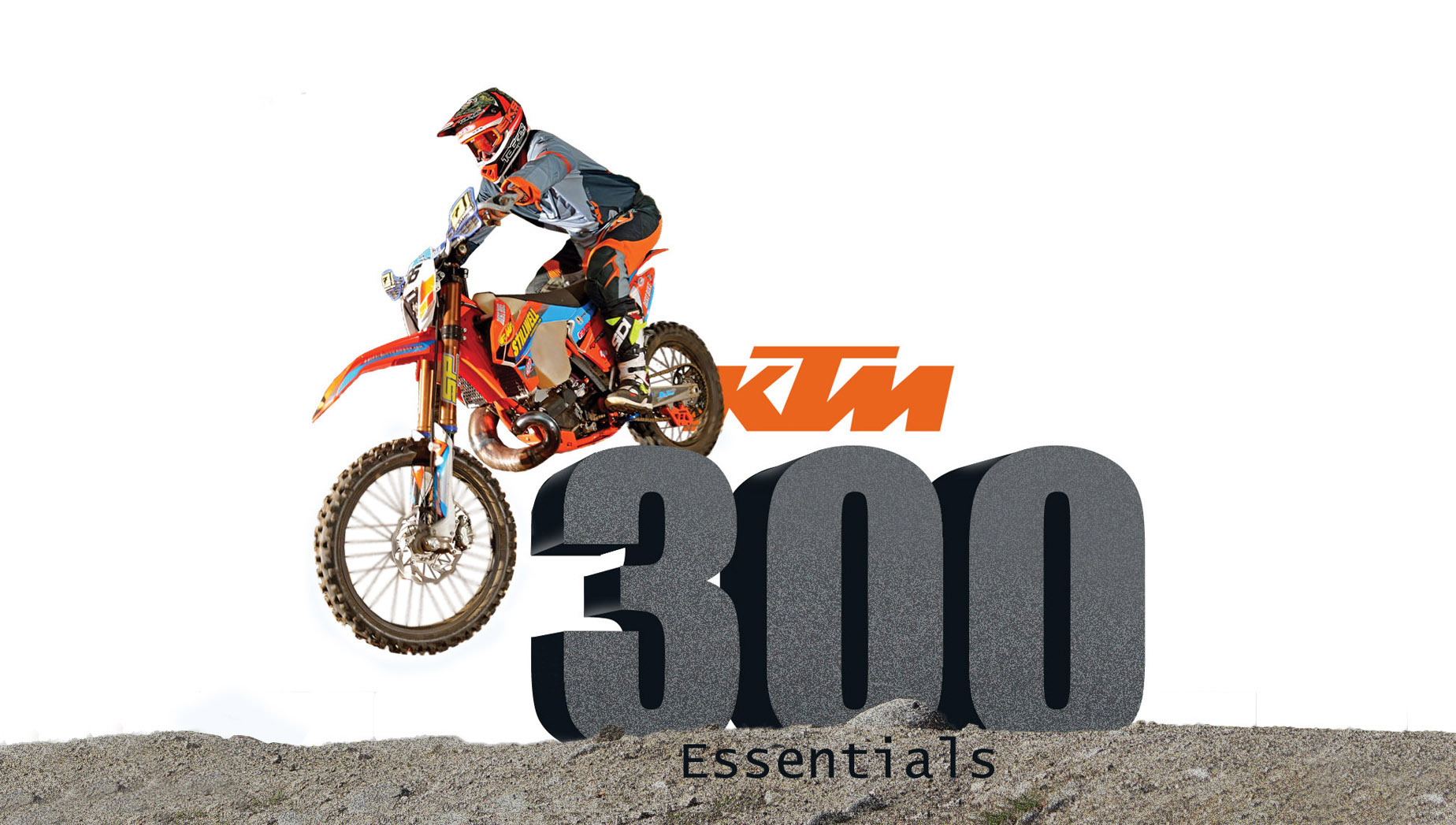 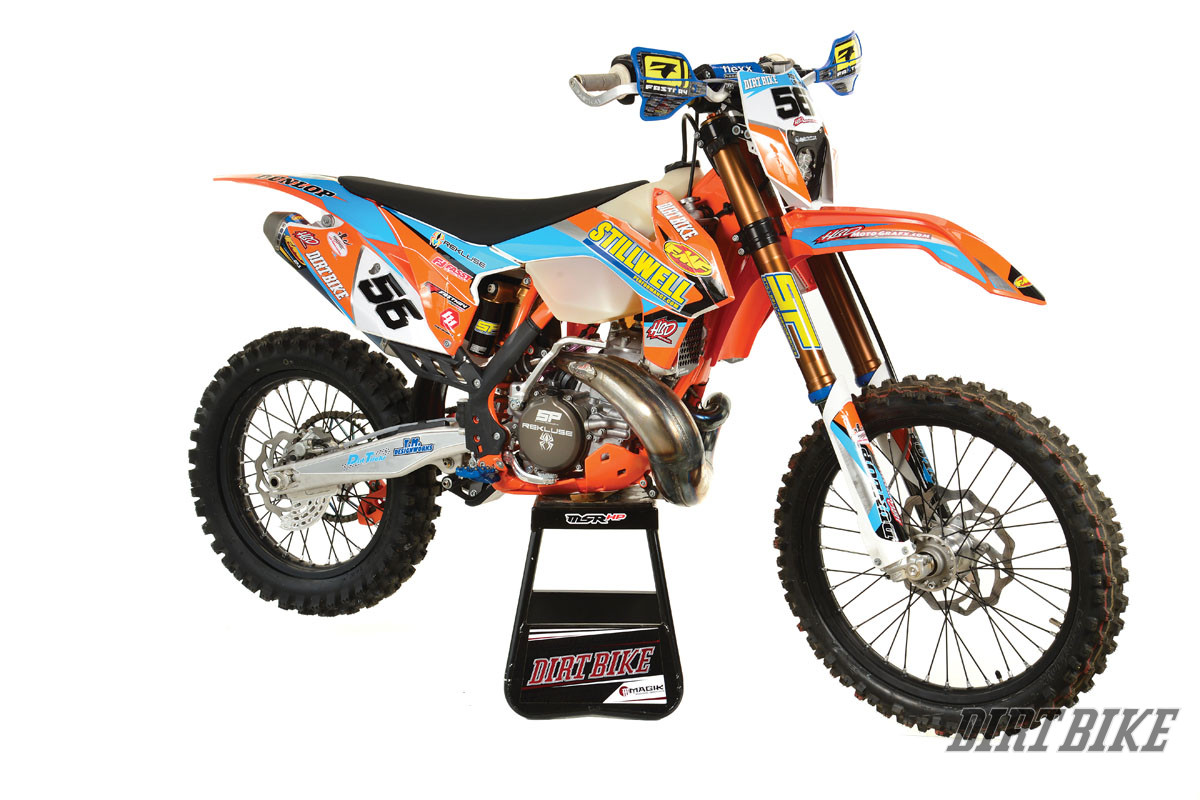 Greatness and perfection are two different things. The difference is demonstrated by the KTM 300, a bike that we absolutely love. Alan Stillwell sees it as a work in progress. He runs Stillwell Performance in Arizona and has built bikes for some of the best riders in the world—guys like Cody Webb, Shane Watts and Jason Thomas. To call him a perfectionist isn’t quite accurate. He doesn’t think anything is perfect—not even the KTM 300XC. Alan offered to build up our 300XC to show us the possibilities. We wouldn’t let him have it, so he gave us his. He purchased a new 2015 300XC and, without even starting it, rebuilt it into his current vision of the perfect two-stroke. The result is hard to refute. His XC is so good that he’s going to have a very hard time getting it back.
INGREDIENTS
This bike was built for exactly the type of riding we like best: tight and tough. We kind of assumed that SP was going to come up with an EnduroCross bike, because that’s what the shop is known for. But EnduroCross is a show, not an activity. The build concentrated on making the bike an exceptional tool for unexceptional riders. Guys like Cody Webb leap over all the rocks and roots that the rest of us have to deal with, and that’s where the XC shines. 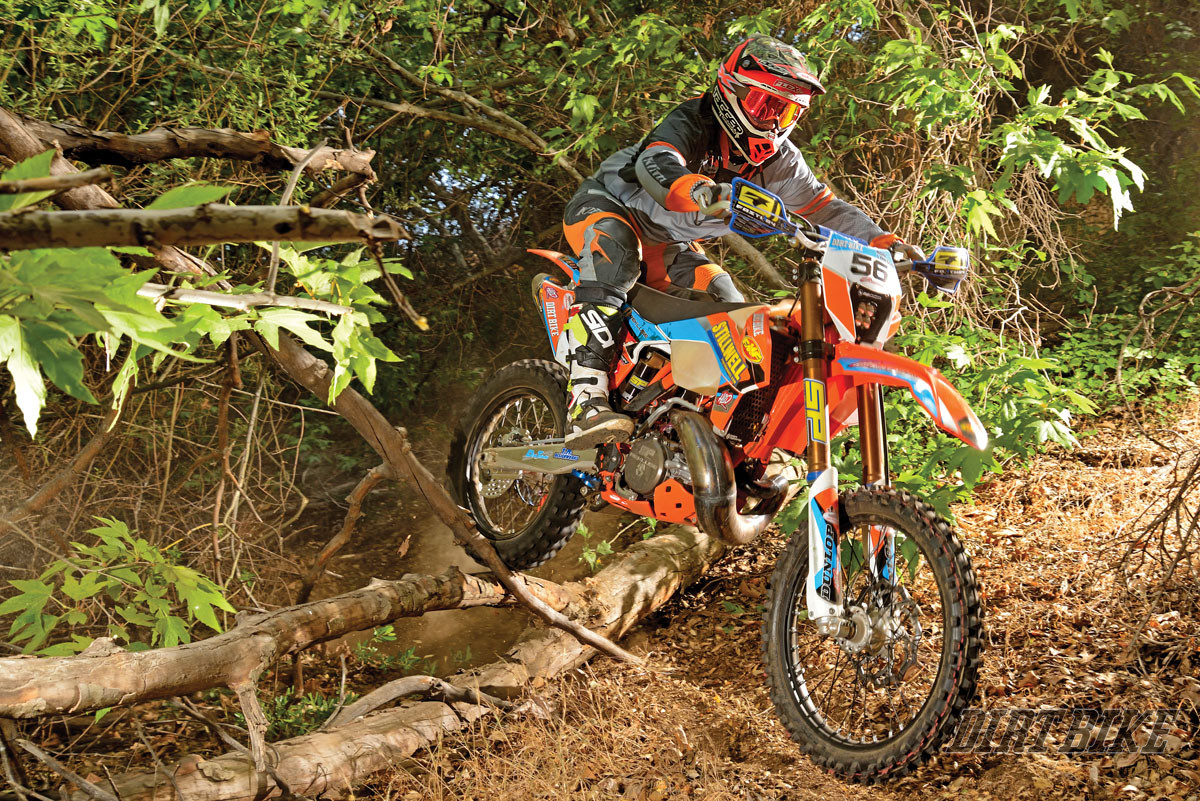 The cornerstone of SP’s business is suspension; they’ve developed a reputation for dealing with “problem suspension” like Marzocchi and, in the case of recent KTMs, the WP 4CS fork. The fork has a small-diameter damper rod and relies on oil displacement from the depression of that rod to do all its damping functions. The problem is that there’s not very much oil volume, so the fork is very finicky. Alan installs many of his own parts in the 4CS to make the fork more adaptable to different types of terrain. He also puts a Kashima coating on some internal parts, which helps reduce friction. SP even makes its own fork slider that’s more durable and reduces drag. But, the real secret is to set up the fork for a specific rider and application. Same goes for the rear shock. SP installed a bladder in the shock reservoir and gave it the coating and valving treatment.
Even though Stillwell is best known for suspension, the shop knows its way around a two-stroke motor. The cylinder and head were modified, and compression was bumped up slightly, but not enough to require race gas. Jetting a 300 is tricky, and SP has the market cornered on the famous Suzuki needle that Russell Bobbitt discovered years ago. Ever since the news of a magic RM needle spread on the Internet, there’s been a run on Suzuki dealers, with KTM riders ordering any and every needle in the parts book. Those GSXR parts-counter guys probably have no idea what’s going on. 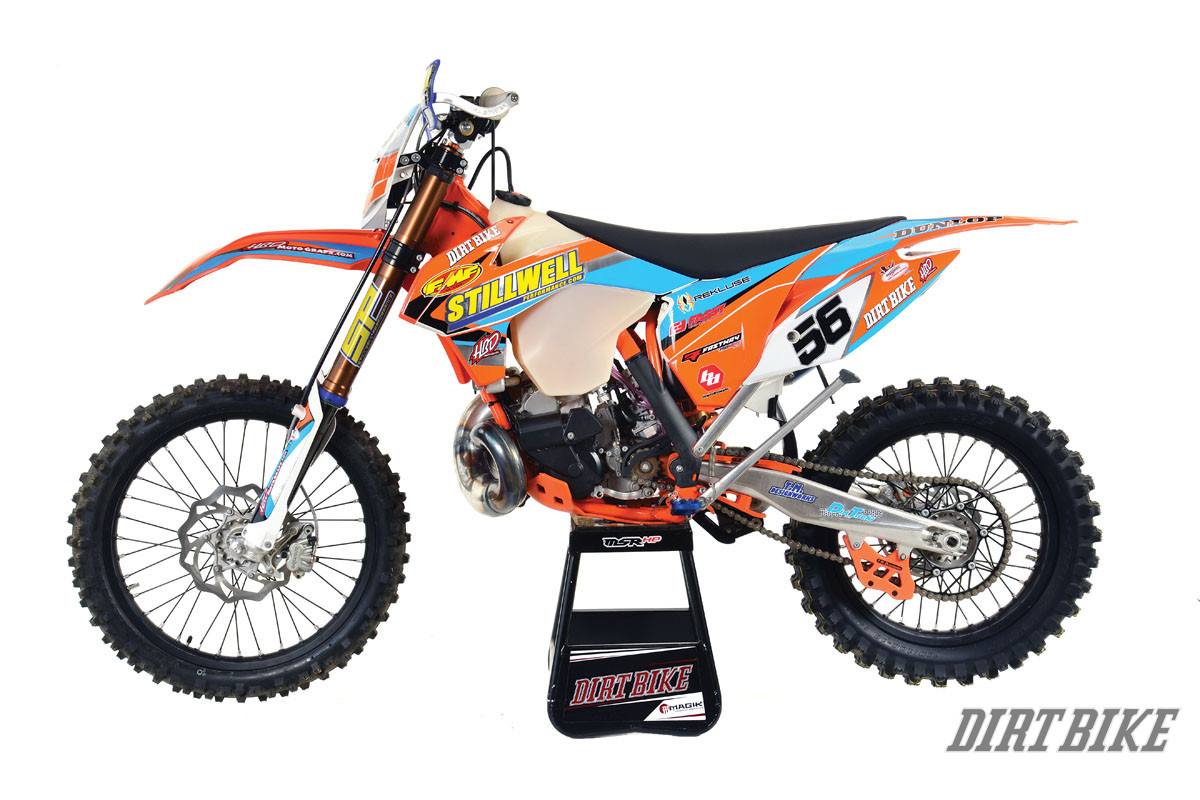 Jetting this particular bike was different from the dozens of other 300s out there, because it was one of the first bikes in the real world to get the FMF Enduro Extreme pipe and Titanium 2 silencer. The pipe is something completely new for FMF. It’s a high-end product designed specifically for extreme trail riding, as the name suggests, and is delivered without nickel plating. It has different characteristics from the other exhausts in FMF’s line, and we discovered that it requires slightly fatter jetting on the bottom. Instead of the 40 pilot that SP would normally use in this type of application, it needs a 42 or 45.
BOLTING IT ON
There are certain bolt-on products that have become synonymous with this type of project. The Rekluse is one. By now, every off-road rider in America has at least thought about the possibility of using an automatic clutch. In our experience, sometimes it’s a good idea; sometimes it isn’t. When it’s right, you don’t notice it. You can use the clutch lever manually or you can just stomp on the rear brake without the fear of stalling. The problem is that a bike has to run perfectly at low rpm in order for this to happen. Most don’t. The problem has nothing to do with the clutch itself but with the bike. The jetting or mapping can be anywhere. There are also tricks with the setup. Alan knows all this and has installed about a zillion Rekluse Core EXP clutches in KTM 300s, so, in this particular case, it was risk-free.
The other bolt-on products included Fasst Co. Flexx bars, the new Fastway/Stillwell linkage guard, a very cool Dirt Tricks steel rear sprocket, Enduro Engineering radiator guards, a TM Designs Slide & Glide kit, a Baja Designs Squadron Pro headlight, Fastway footpegs and Fastway full-wrap handguards. Alan has some setup habits that are pretty cool too. He installed the master-link clip on the inside of the chain so it was more protected, and he installed the footpeg pins upside down so the cotter pin wouldn’t be vulnerable. He put Evans waterless coolant in the radiators so that it wouldn’t boil over. All that stuff was designed with the understanding that this bike was going to get crashed and thrashed in ugly terrain. That turned out to be true. 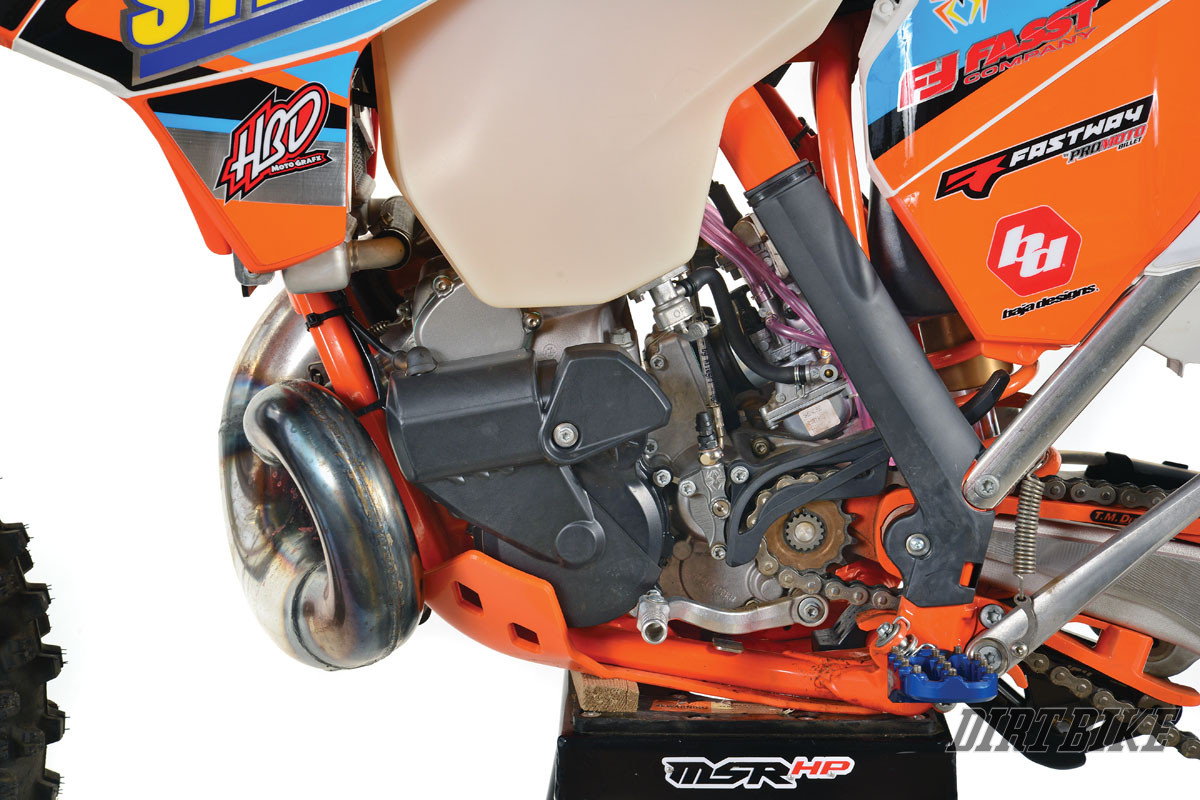 RIDE FAST, LIVE HARD
As you might expect, the bike was awesome. Well, the KTM 300XC starts out awesome, so this bike was awesome squared. The suspension, which is the only thing that could be called a sore point on the stocker, was cushy and didn’t have any of the harsh spikes that the 4CS is known for. But, it was the motor that really impressed us. We thought there wasn’t much room for improvement, but, apparently, we thought wrong. The 300 had more power in the middle and on top without giving up anything anywhere. And, this turned out to be the best application for the Rekluse automatic clutch that we’ve ever experienced. The clutch worked so well manually that you could ride the bike and not realize it was automatic. But, at super-low rpm, you could inchworm your way up steep hills and get super traction. There’s no way that a human hand connected to a human brain can work the clutch lever as skillfully in this type of terrain. 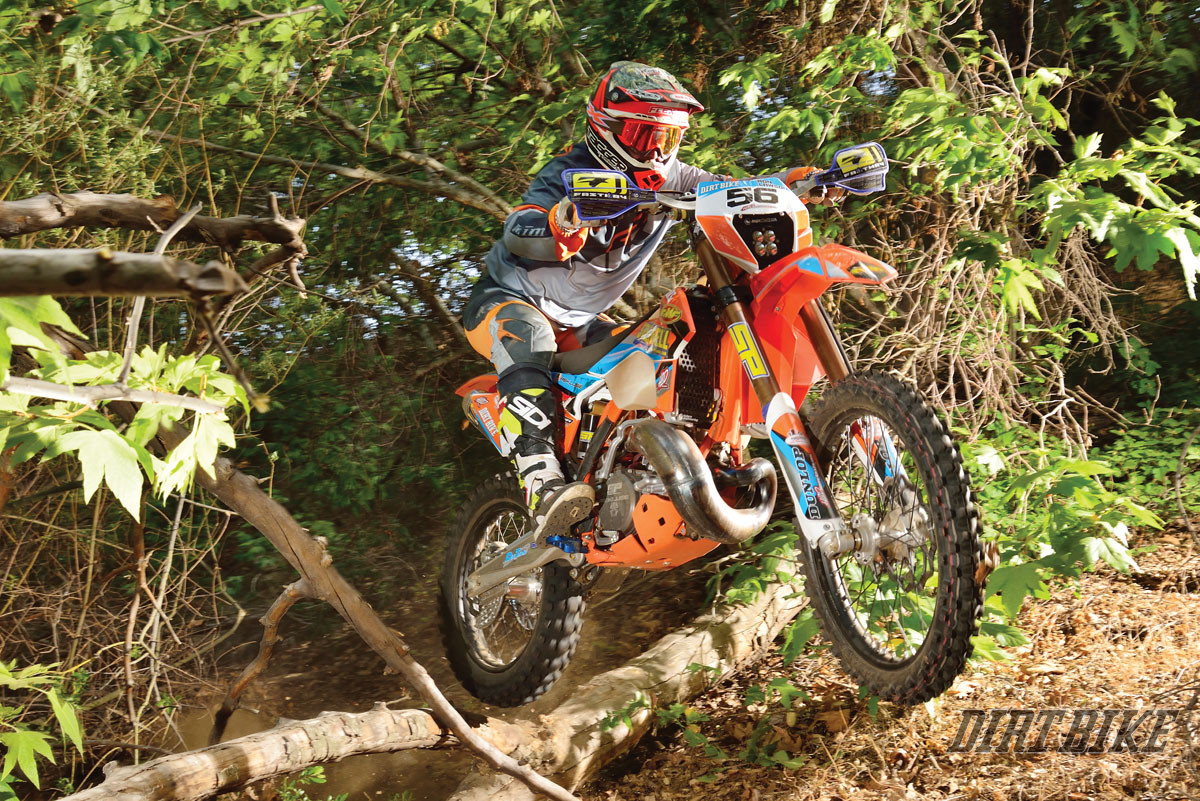 We go through a lot of project bikes in the course of a year, and the biggest problem with this one is that it isn’t ours. Unless we think of something quick, Alan will want it back. We’re thinking about sending him to Florence to see if the Italian authorities arrest him for trying to fix the statue of David or something. If that doesn’t work, he’ll just have to build another one of these for us to keep.