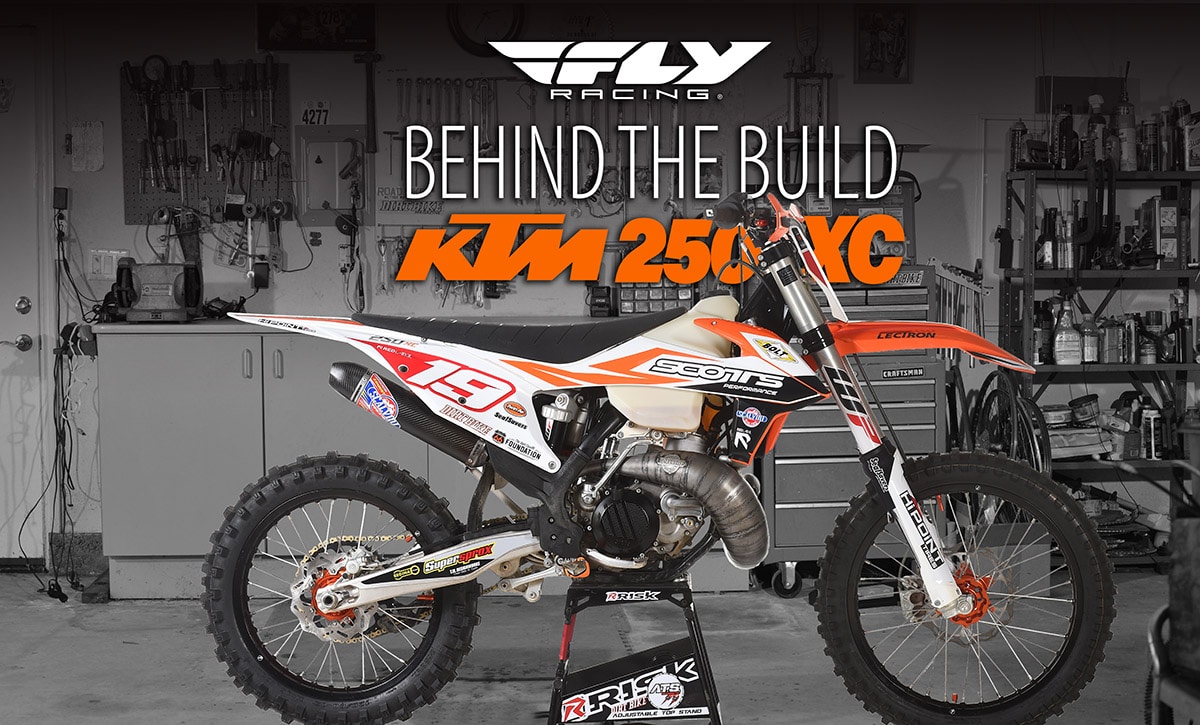 Some events should be commemorated. The 2019 250XC was among the last carbureted off-road bikes that KTM offered. It and the other 2019 XCs (the 300 and 150XC) were given Transfer Port Injection for the 2020 model year. Whether you love or hate fuel-injection is a topic for another day. We love both for different reasons, but we can see which way the wind is blowing and wanted one last fling with a carbureted KTM two-stroke. We found one and gave it a little attention before moving on to the next chapter. The end result was the best of both worlds.

CARB-LOADING
TPI has come a long way in the years since its release, but it still isn’t perfect. It adds weight and expense, plus TPI bikes still occasionally hiccup and act weird. Carbureted bikes hiccup, miss and exhibit a lot of misbehavior, too, but it’s all very familiar stuff. There are a lot of reasons that purists will want to stay with carbs. The problem is that even the 2019 250XC isn’t a perfect example of the breed. Many people say it was better in the days before KTM switched to Mikuni carburetors on all its two-strokes. The rumors were that it was simply a supply problem. Keihin had scaled back its production of carburetors. Some riders have made the switch back to Keihin and say the results are good, but we’ve ridden some of them and don’t see too much difference. We’ve always been very curious about the newest Lectron carbs, though, and wanted to find out more. The Lectron design has been around for years, but it has recently been updated. It puts most of the jetting duties on a metering rod instead of spreading them out among five different jets. There’s also an adjustable power jet for allowing more or less fuel at wide open. It has a choke and idle speed adjuster as well, just like a conventional carb.

The carb for the KTM XC comes set up for the bike according to Lectron’s internal testing. If you get the full kit, it’s a bolt-on mod with a throttle cable and twist grip included in the box. One very cool feature is the see-through float bowl. When you turn on the fuel, you can see gas flowing into the carb. If not, you know something’s up without wasting your time kicking. The main advantage, though, is that you shouldn’t need a box of jets.
The metering rod can do almost all the work. You can move it up or down in quarter-turn increments, which is about 0.006 inches. You can further tune the carb by opening or closing the power jet. The Lectron is supposed to self-adjust for air density, meaning you shouldn’t need much tweaking for changes in altitude or temperature.

GP RACER
Throughout the year, this bike was used for GP racing. It’s particularly suited for that, because in most western GPs four-strokes don’t get a displacement advantage. A 250 is a 250, and a racing two-stroke like the 250XC will murder virtually any 250F in acceleration. The fact that it has electric start makes it a nearly perfect GP bike in stock form.

“Nearly” is, of course, a loaded world. If you race out west, you know that a steering stabilizer is mandatory. It has been like that for over 30 years. The KTM 250XC is actually much more stable than the bikes back in the day when the Scott’s steering stabilizer first came out, but it still needs one to be competitive. If you don’t know that already, you’re giving away two or three places each time you race. No joke. The damper we put on the XC has been moved from bike to bike for years. It just takes a new mounting kit and an annual tuneup at Scott’s.

Another good idea for racing out west is an extra wheel set. You need a spare just so you can get to the line in back-to-back races if you have a flat. For this bike, we did something a little different. Instead of duplicating the stock 18-inch rear wheel, we ordered a set of $700 AOMC AMP wheels with a 19-inch wheel in the rear. You can still use it as a spare (both rear wheels got a 50-tooth Supersprox sprocket), but you can fine tune your tire selection for different events. Much of the National Grand Prix Championship and WORCS races take place on and around an existing motocross course, where a 19 works better. The 18 would be the starting tire for events that take place in the desert. The bike got a set of Hi-Point tires with the oversize 90/100-21 in front. The chain was Regina, and we used SealSavers to protect the stock WP AER 48 air fork.

KEEPER
Apparently, jetting a two-stroke doesn’t have to be that hard. We expected to spend a day or two working to get the carb just right—that’s what history has taught us about two-strokes. Instead, we spent about 30 minutes. The Lectron came to us nearly perfect for a cool, 70-degree day at 1500 feet MSL. It started easily and seemed absolutely perfect for trail riding. It wasn’t until we put the motor under a big load climbing a sandy hill that we noticed slight detonation. Our first move was to turn the metering rod clockwise a full turn. That eliminated the pinging, but then it was a little rich down low. Eventually, we settled on half that much. We also rode the bike at 3500 feet on a warmer day and noticed no difference in jetting. We don’t know what to expect as far as the bike’s amenability to greater changes in altitude and temperature, but already it’s an improvement over the Mikuni. The bike ran cleaner and didn’t have that lean-surge feeling that KTM two-strokes have had for years now. We can’t say, however, if the Lectron was responsible for an increase in horsepower. If it was, it wasn’t significant enough for seat-of-the-pants testing. 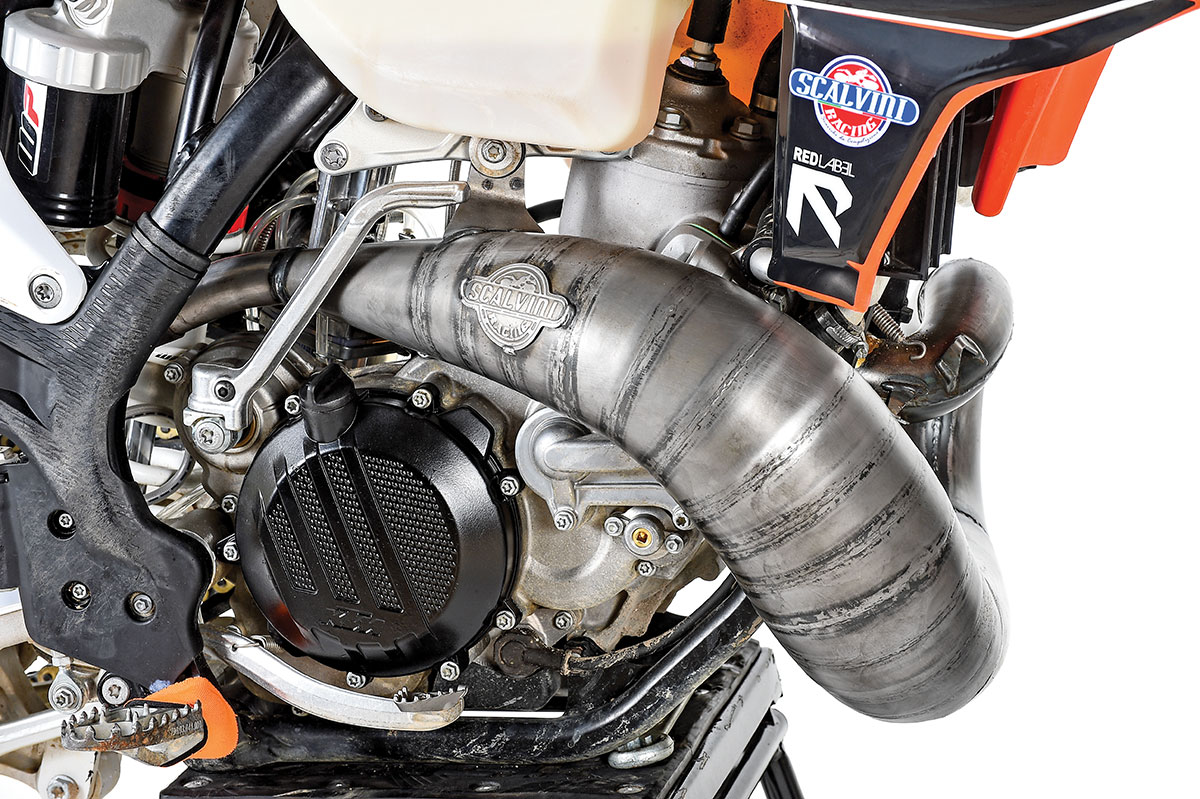 Maybe this bike is the pinnacle of two-stroke technology. As impressed as we are with TPI, the advantages aren’t yet that clear. Yes, TPI machines get good fuel mileage, and yes they deal with altitude well, but our project bike was pretty good on both counts without the complexity. Let’s put it this way: if two-strokes really do get better than this bike, we’re going to be very, very happy riders. 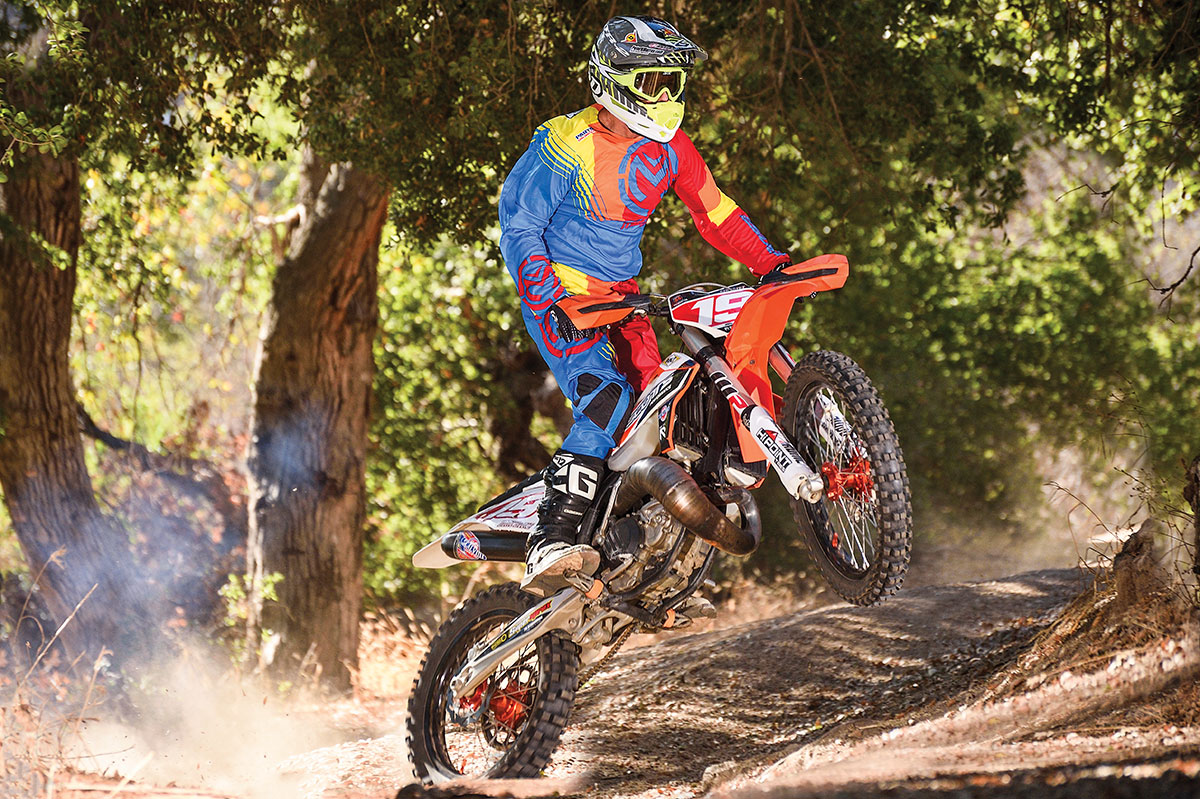