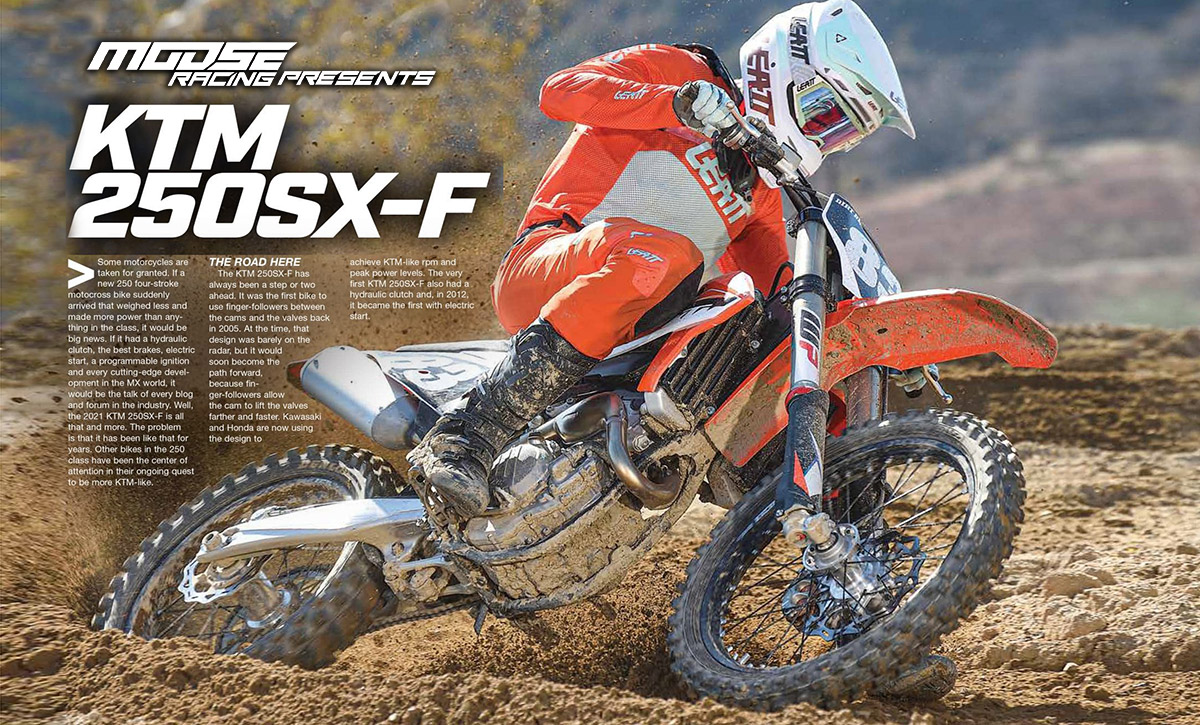 Some motorcycles are taken for granted. If a new 250 four-stroke motocross bike suddenly arrived that weighed less and made more power than anything in the class, it would be big news. If it had a hydraulic clutch, the best brakes, electric start, a programmable ignition and every cutting-edge development in the MX world, it would be the talk of every blog and forum in the industry. Well, the 2021 KTM 250SX-F is all that and more. The problem is that it has been like that for years. Other bikes in the 250 class have been the center of attention in their ongoing quest to be more KTM-like. 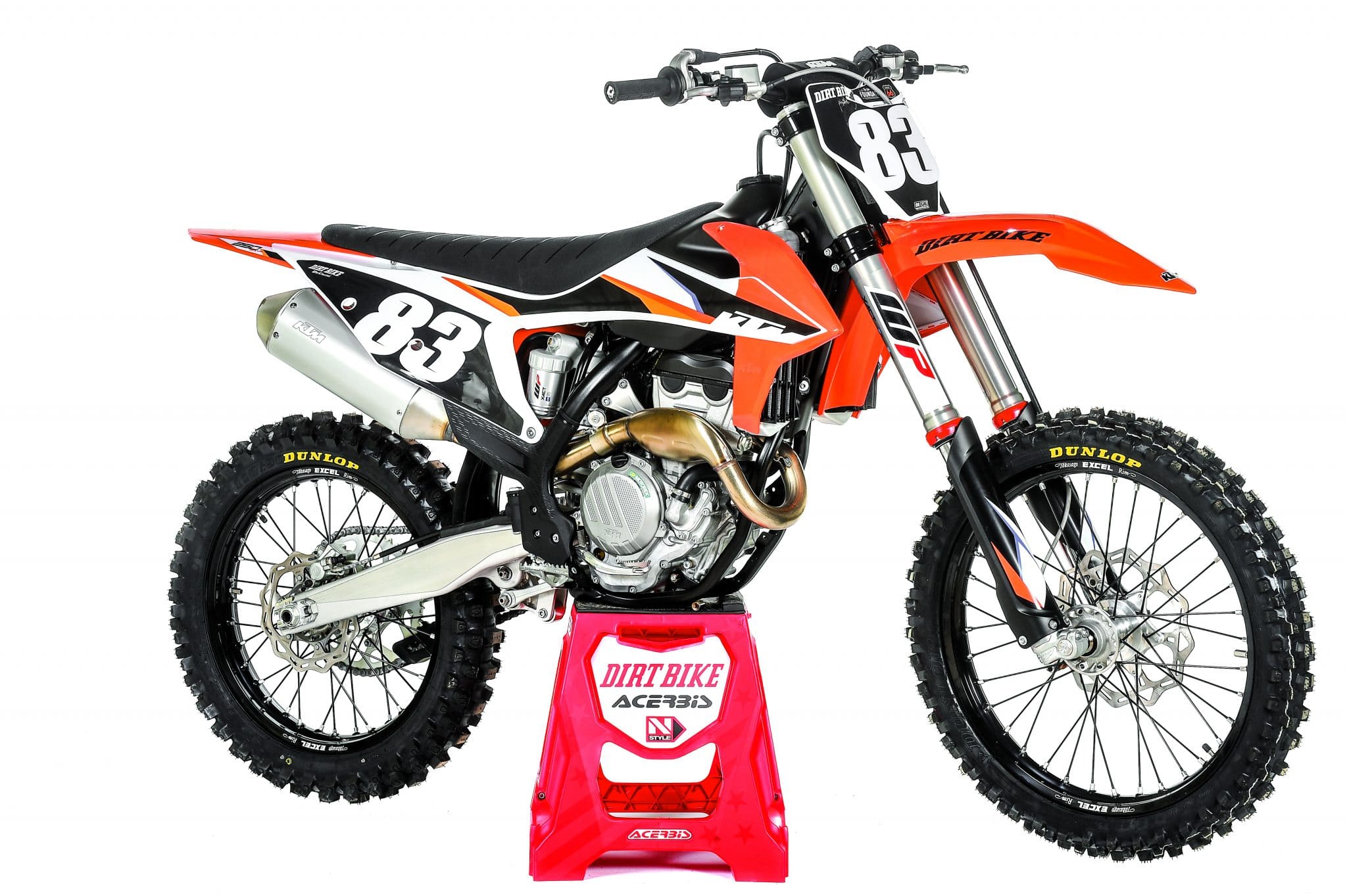 The 2021 KTM 250SX-F has few changes aside from the internal fork design. It remains the 250-class benchmark in terms of weight and power.

THE ROAD HERE
The KTM 250SX-F has always been a step or two ahead. It was the first bike to use finger-followers between the cams and the valves back in 2005. At the time, that design was barely on the radar, but it would soon become the path forward, because finger-followers allow the cam to lift the valves farther and faster. Kawasaki and Honda are now using the design to achieve KTM-like rpm and peak power levels. The very first KTM 250SX-F also had a hydraulic clutch and, in 2012, it became the first with electric start.

For 2021, the 250SX-F has very little that’s new, but it did receive attention where it needs it the most. The WP XACT air fork has a number of new internal designs, including a redesigned mid-valve, an elastomer bottoming cushion and tool-free damping clickers. The primary air chamber is opposed by a balance chamber that is self-filling by way of a little slot partway through the stroke, and that slot has been repositioned this year. The air is still contained in the left leg, while the damping functions are in the right. It was always the best of the air-fork designs, which is why it survived, while Showa and KYB have gone back to coil springs.

Other changes for 2021 are limited to low-friction seals in the linkage and miscellaneous details. All of KTM’s four-stroke motocross bikes will be compatible with the company’s new smartphone-based tuner, which has yet to be rolled out. There’s no transmitter on the bike as delivered; you have to buy that yourself. It will, however, be standard equipment on the Troy Lee Designs Edition later in the spring. That bike will also have cosmetic upgrades, special graphics, an Akrapovic cylinder, anodized triple clamps, a holeshot device, special wheels, a Hinson clutch cover and a semi-floating front disc. It will sell for $10,299, which is $1000 more than the standard version. As an interesting side note, the Troy Lee team will be mounted on GasGas motorcycles for 2021. KTM’s in-house factory 250 rider is Max Vohland. 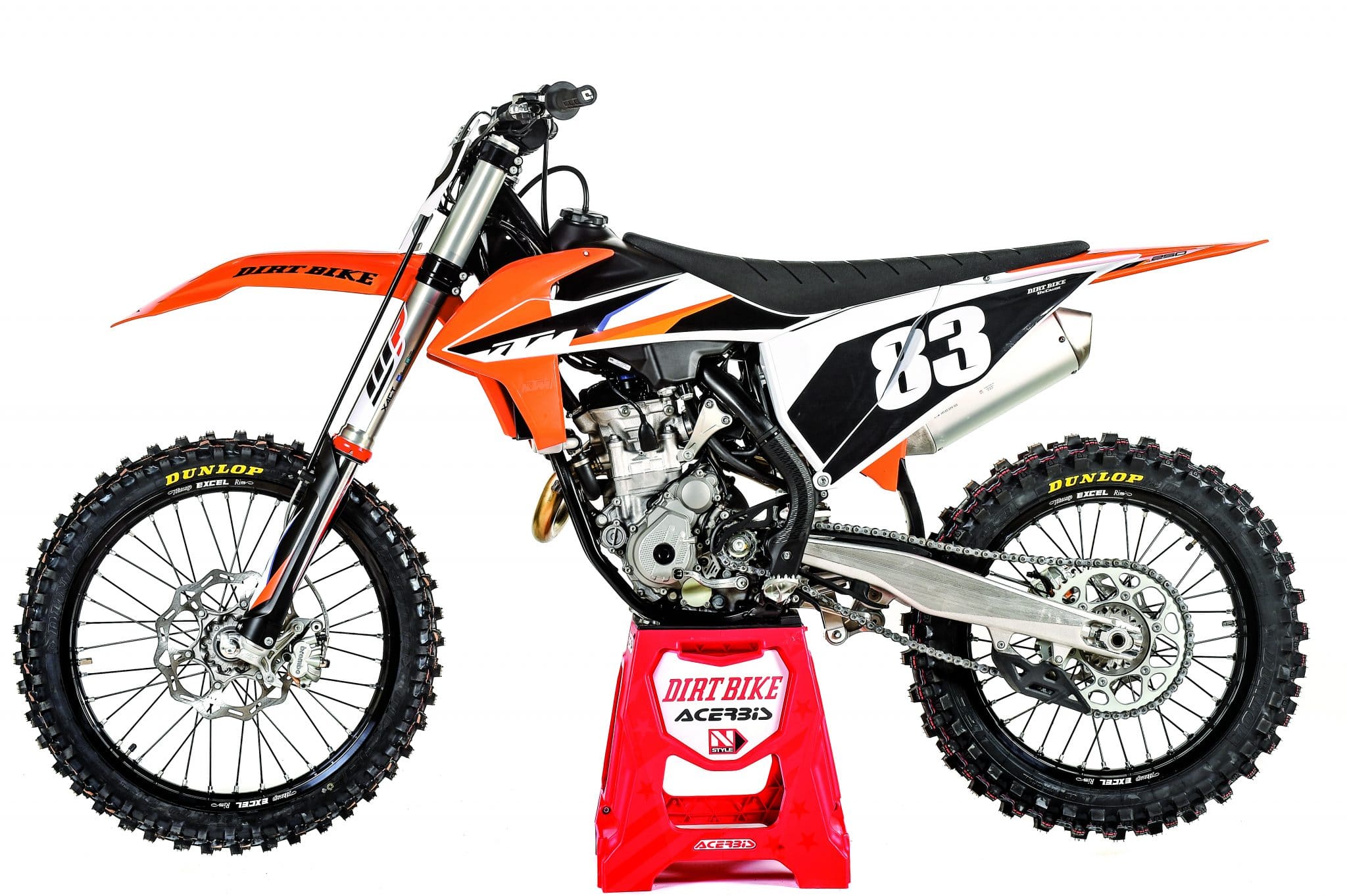 At 218 pounds without fuel, the KTM is still the lightest in the class, even though its siblings from GasGas and Husqvarna are very close.

RIDE LIKE MAX
The first lesson you learn when you ride the KTM 250SX-F is that you can’t be passive. This is a bike that gives you as much as you give it. The motor likes to be revved, so much that you feel like you’re abusing it. Get over it. You can’t hurt the KTM by holding it wide open. On top, it still makes power that can match anything in the class. KTM gives you an extra airbox cover when you buy the bike, which allows the motor to breathe better and hit harder. There’s no real downside to using it instead of the standard cover, unless you ride in wet conditions. The vents are so large, you can actually touch the element with your finger.

Down low, the KTM doesn’t feel like it’s producing much power, but it’s deceptive. On the dyno, the KTM actually looks great through the middle and bottom, but the trick is that you have to open the throttle. It doesn’t respond that well to partial throttle opening and half-hearted efforts. The bike comes with a handlebar-mounted map switch that allows you to choose between two different maps and also provides traction control and launch assist. Most riders prefer map one, although the differences aren’t that striking. Very few riders use traction control or launch assist, although they both have value in the right conditions.

The KTM remains the lightest bike in the class by a significant margin. On our scale, it weighs 218 pounds without fuel. That compares to 227 for the Honda, Yamaha and Suzuki, and 228 pounds for the Kawasaki. That’s a big advantage. The KTM also might have the best overall cornering manners. Suspension, on the other hand, is historically the weakest point in the KTM’s personality. It gets better every year, although that’s a little misleading. The days of the WP 4CS fork were dark times. The air fork came in 2017 and was a huge improvement, as well as being superior to the other air forks of the day. Now, against a new generation of coil-spring forks from Japan, the WP air fork is falling behind again. The improvements for 2021 are dramatic, especially when it comes to comfort on small chop and square edges. We also like the fact that it’s the most adjustable fork on the market. That’s especially valuable for a 250 when the buyer can be anywhere between 110 pounds and 200 pounds. Still, a well-tuned coil-spring fork like the one that comes on the Yamaha YZ250F gives better feedback, more comfort and better performance.

THE COMPLETE PACKAGE
KTM doesn’t shy away from supplying its bike with good parts. The Brembo brakes are excellent. The hydraulic clutch has a light pull and good feel, and the levers, grips, rims and handlebar are top-notch. On paper, it’s hard to find fault with the 250SX-F. Between the weight and the power, it’s an amazing machine, just as it has been for years. This is clearly the bike that has driven the advancement and innovation in the 250 class. Most of its appeal, however, is limited to the top of the food chain. It’s a demanding bike to ride. Not everyone is up for it. For some, the KTM leaves a great deal of potential on the table, waiting for the rider to catch up.