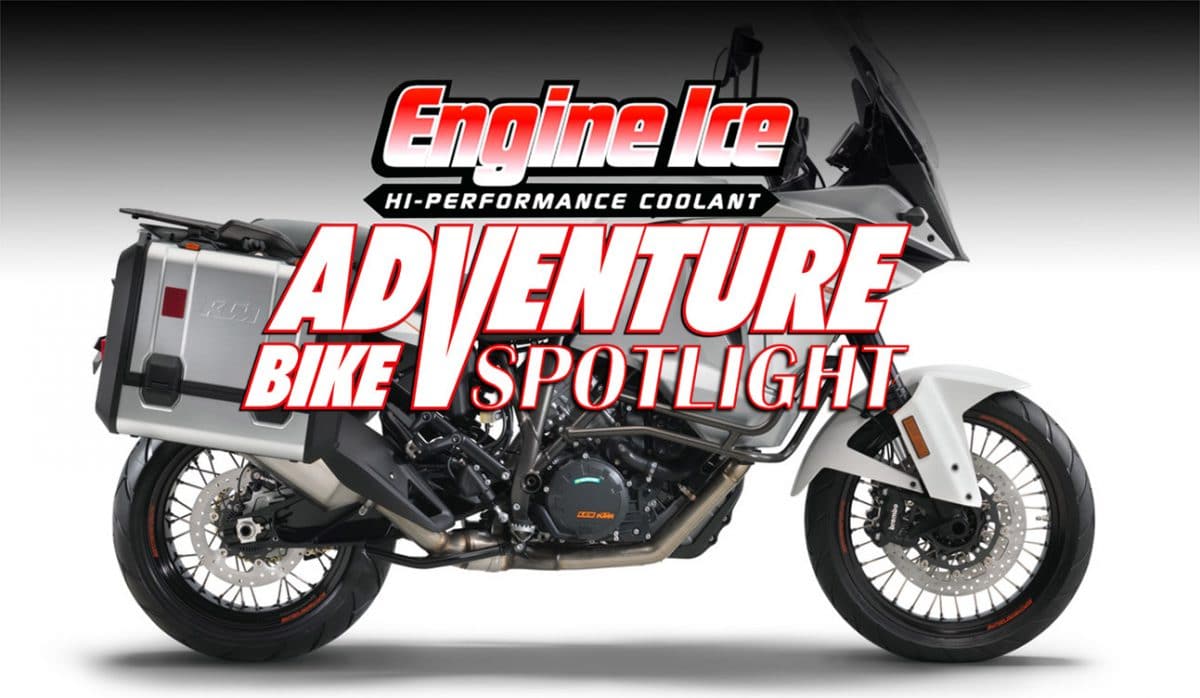 The KTM 1290 Super Adventure R is in the center of this week’s Adventure Bike Spotlight. This is the flagship of the KTM adventure bike line-up, more street oriented and more powerful than the 1090. 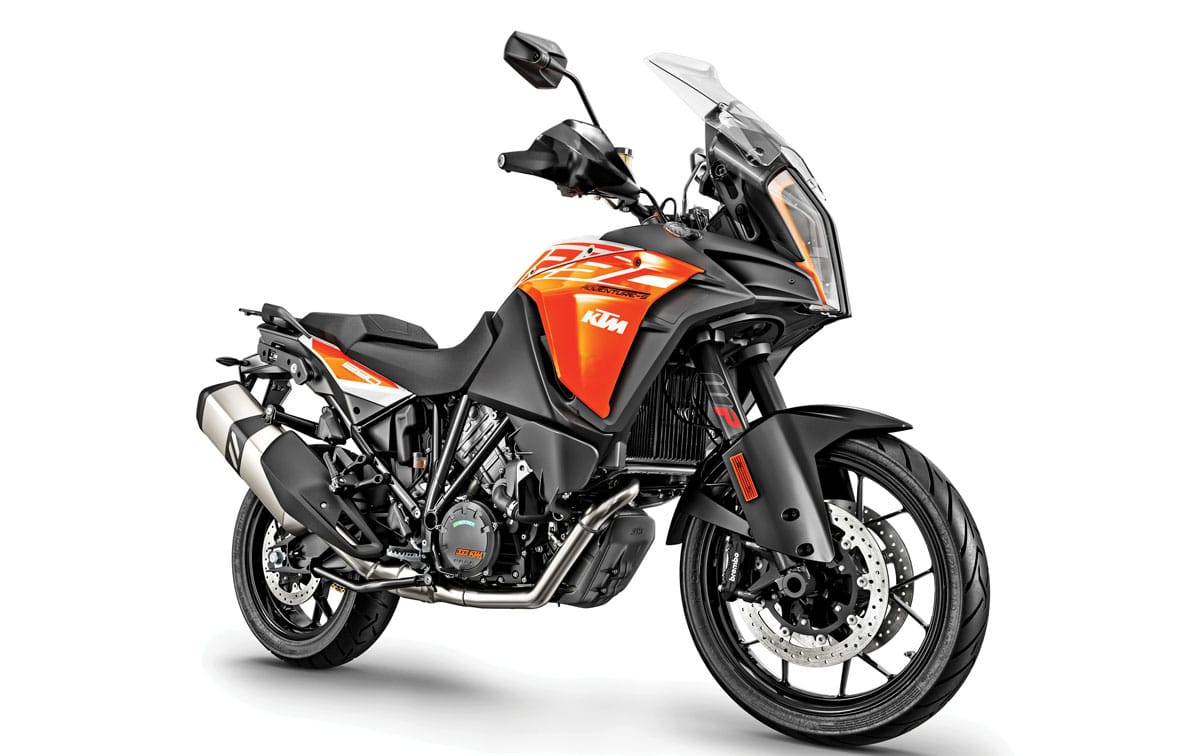 The 1290 Super Adventure R’s heritage is in the dirt, and its WP suspension, steering damper, brakes and chassis transform the machine into a 160-horsepower, six-speed, electronically advanced two-wheeled machine that rips. It weighs just under 500 pounds (dry) and has a Motorcycle Stability Control (MSC) package with multi-mode combined ABS and Multi-mode Traction Control (MTC), including Sport, Street, Off-Road and Rain settings that allow the rider to fine-tune the power application in any situation. Turn-by-turn navigation is new on the TFT dash, with distance to next turn, street names, arrival time and distance to destination. 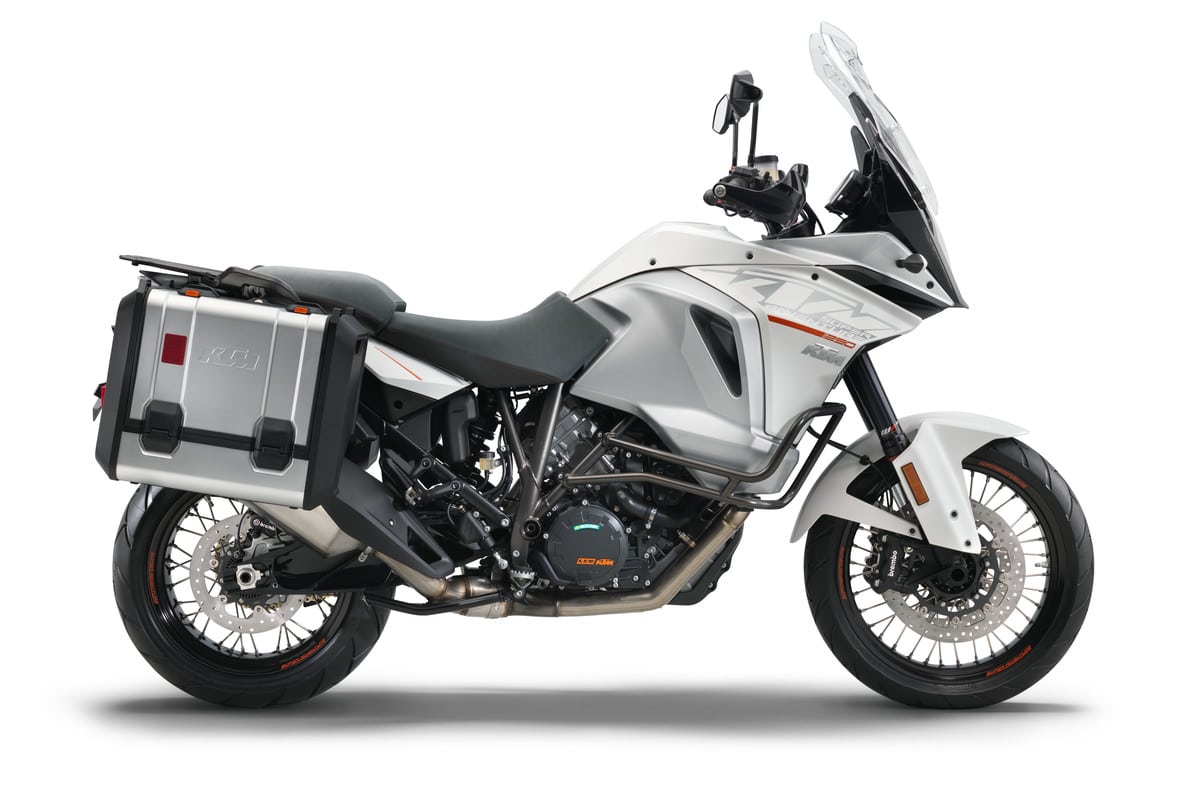 New Zealand’s Chris Birch is well known for riding the KTM 1190 in wild places. He is the current and eight times New Zealand Enduro overall champion, three time Roof of Africa winner, he has been on the podium seven times at Red Bull Romaniacs including winning it in 2010. In this KTM Australia video, he gives the rundown of the 1290 after its international launch in 2017.

You have to study the owner’s manual for a while just to understand what the bike does without being asked. It’s at a whole new level of computer sophistication. The first time we rode it at night we became aware that the driving lights are activated by lean angle and point to the blind spot in turns. There are a number of new features like engine drag reduction, which works with the slipper clutch to keep the rear wheel from chirping, and there’s even an optional hill-hold mechanism that keeps the bike from rolling backwards.

But, the new features that the target rider will really appreciate are the cruise control and the heated grips and seat. They’re both a big deal when it comes to spending hours in the saddle crossing whole states. The 1290 has a comfortable riding position. It might be a little more cramped in the legs than a more dirt-oriented adventure bike, but its upper-body riding position is fairly spread out with tall its bars and great wind protection. The windscreen is tall and adjustable. And then there’s the range. The 1290 has a 7-gallon fuel tank, which is enough to carry you close to 300 miles. By KTM’s standards, this bike is a virtual Gold Wing.

The interesting part is that the guys in charge of this bike couldn’t help themselves. It still works well off-road. If you took the 1190 out of the picture, in fact, it would be one of the best big adventure bikes in the dirt. Ground clearance is okay, crash protection is actually very good, and the fact that the seat height is lower than the 1190 gives most people more confidence. The functioning traction control puts it a step ahead of most other makers, including BMW and Yamaha. The soft suspension isn’t a problem on most dirt roads, as long as you’re not having motocross flashbacks and riding too fast. As you know, the definition of “too fast” is anyone who’s going faster than you.

We admit that we did fewer off-road miles than usual with this bike. It’s aimed for a ride that’s 85 percent pavement and 15 percent bad pavement. Most riders won’t ride any dirt at all. We’ll give the guys at KTM credit and respect for making a bike that can handle itself in the dirt, even if it’s not expected to. Just between us, we know who they really are.