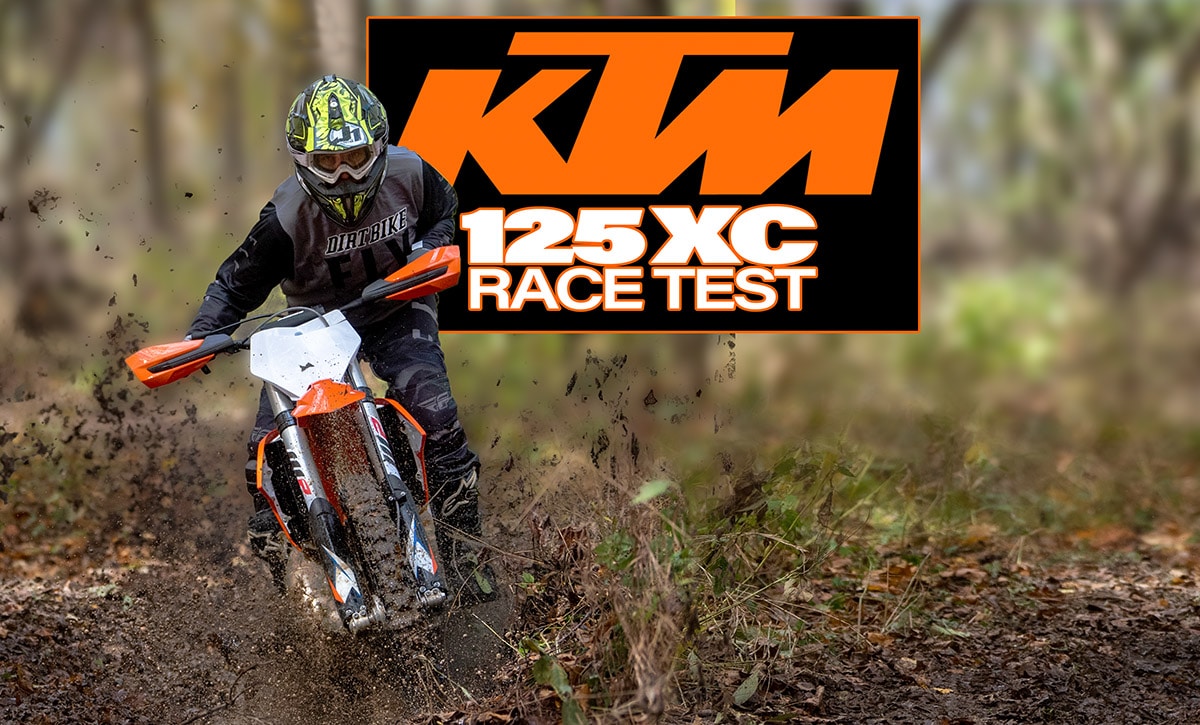 Let’s get the faint irony out of the way. The new KTM 125XC is not new. It’s actually the oldest bike in KTM’s line-up. Back in 1968, John Penton sold a 125 two-stroke off-road bike called the Six-Day in the U.S. It was manufactured by KTM and it was what got the company started in the dirt bike business. The fact that there’s a KTM 125cc off-road two-stroke in 2021 is very cool, but also points out the fact that there hasn’t been one in the line for a long time. Weird–100cc and 125cc two-strokes got America started in the dirt.

Here’s what else is weird: we tend to relegate 125s to a certain profile rider: Young, skinny, and inexperienced. I am none of those things. Yet, I love 125s. I don’t understand why all old, thick and decidedly over-experienced riders don’t glom to small two-strokes. There are plenty of big, powerful bikes out there that provide evidence that I’m not as fast or strong as I once was. The 125 two-stroke, on the other hand, allows guys like me to hold the throttle wide open, dive deeper into turns and get away with bigger mistakes. They let me ride faster, longer and stronger. The 125 two-stroke is a hero maker.

The main reason that KTM brought back the 125 off-road bike was to support the GNCC’s new FMF XC-3 Pro-Am class. This is a money-paying class limited to 125cc bikes–not 144s and not 150s. The offical thinking is that 125s allow a better transition from the mini ranks. I concur. The whole idea of a 144 in the first place was to put two-strokes on a more even playing field with 250cc four-strokes. You give up too much for that. The current KTM 150SX motocrosser is demanding and harsh–exactly what you don’t want for a kid just off an 85. Or an old, thick, decidedly over-experienced guy like me. The KTM 150XC-W is a much sweeter bike for beginners and old men, but never really designed to be a racer.

It wasn’t hard for KTM to create the 2021 125XC. It’s kind of like a 150XC-W off-road bike and a 125SX motocrosser had a kid. The suspension components, top-end and gearbox are from the SX, while the electric starter, the 18-inch rear wheel, the kickstand and the handguards are from the XC-W. The valving in the WP shock and the Xact air fork are aimed more for off-road riding, and the piston is slightly different, as well, but most of the parts that go into the 125XC can be found on some other models in the KTM line.

For me, the Ironman GNCC was the perfect place to race and learn about the new 125XC. I’m a west-coast guy and frankly, the Ironman is less of a culture shock than most other eastern off-road events. I’ve ridden there before; the trails are wide (by Indiana standards) and have a good flow. A few days of rain preceded the event making for hero dirt.

What I didn’t know going into the race was that the Ironman had become the most popular race on the GNCC schedule. The Sunday morning sportsman race actually set a record for most riders on the course at one time: almost 1000. My class was lined up about 20 rows deep. When it started, I instantly lost track of the other riders on my row. I merged in with the wave in front about the same time that the next wave caught up. Then we all dove into the woods. The course was 13 miles long and consisted of an ATV-width main line with criss-crossing single tracks branching out. It was a constant exchange of passing and being passed. When I would come up on a slower rider, I would branch off the main line into a smaller one. Out of the corner of my eye, I would see another rider doing the same thing on the other side. Then we usually race to some point where the lines crossed each other, resulting in a game of Chicken like a figure 8 race. This went on for two hours. In 40 years of racing, I can’t say I’ve ever experienced anything quite like it.

There’s no motorcycle made that would have made this harsh indoctrination any easier. The magic of the 125XC is that you spend most of your time coasting. The Indiana trails had an even flow of turns in the woods broken by brief straights in cornfields. The procedure was simple: gas it up and catch as many gears as possible in the straights and then do damage control when you get back in the trees. The gas-it-up part was hard at first. The bike made plenty of power, but it didn’t have a long pull. It started late and ended early, so you have to shift. A lot. There’s a learning curve involved. At first you attempt to make each gear last longer than it should by abusing the clutch on the bottom and over-revving on the top. The clutch has such a light pull and is so fade proof that you can actually get away with it for a while. But the more quickly you adapt to the shift,-shift-and-shift-some-more way of thinking, the better. Before you dive back into the trees, you learn to knock it down at least a couple of gears (never downshift one gear at a time). The greatest aspect of the 125XC is that you can dive deep and brake late. It will stop faster than any dirt bike made. Then the damage control part of the process comes into play. The woods are dark and you can’t always see what’s coming, so you have to react fast. The Ironman is all about dodging things: trees, other riders and big bumps. Again, the 125 is sheer magic for this. It weighs less than pretty much any other dirt bike as well as most dirt bike riders. At first, I thought I was going too fast for the chaos that came with every dark clump of trees. But the bike forgives all. Eventually I understood that “too fast” was actually much, much faster than I was going. That’s where the fun starts.

Suspensionwise, the bike was soft for me. I’m 190 pounds, which is considerably outside the bike’s target envelope. We bumped up the fork pressure and compression damping beforehand, and it probably would have been fine if not for the damage that those other 999 riders did to the course each lap. It got rougher and rougher each lap while I got weaker and weaker. Again, having the lightest on the course was a life saver. As I came around at the end of my third lap I was mentally preparing for the final loop, and I was surprised to get the checkered flag. The race was regulated by time, not laps, so whoever crossed the finish line at the two-hour mark got the flag, regardless of his position. I was one of the first ones in. At first, I was relieved. That faded quickly. If I had gone just a little faster, I would have made the cut for another lap. And, to my surprise, I had another lap in me. I felt robbed.

That’s probably the most important takeaway from my weekend on the 125XC. When an old, thick and decidedly over-experienced guy can ride for two hours on one of the roughest courses in the GNCC world and still want more, that’s unusual. I guarantee it wouldn’t have happened that way with any other bike.

LIVING WITH THE HUSKY FE450 DUAL-SPORT