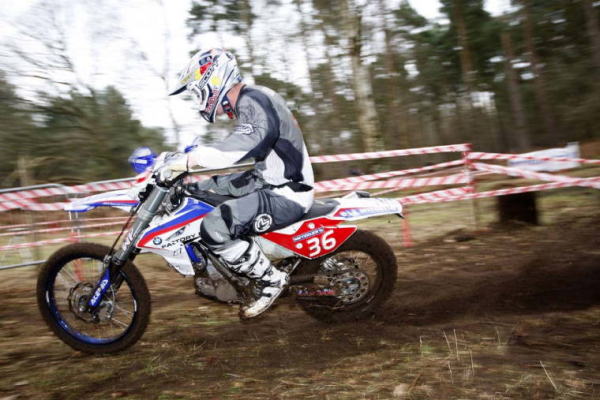 BMW Motorrad Motorsport team rider David Knight has made the perfect start to his participation in the ’09 British Enduro Championship by winning the opening round of the five-event series, the Diss MCC organised Muntjac Enduro. Competing in the event for the first time, and returning to the BEC after a two-year absence, Knighter ended the one-day event ahead of 450cc Husqvarna mounted Si Wakely and 450cc Husaberg rider Tom Sagar.

Following several weeks of testing with the BMW Motorrad Motorsport team in preparation for the ’09 World Enduro Championship all eyes were on Knight at the start of the Muntjac Enduro as he made his first ever outing on his 480cc BMW in a time-card enduro. Knowing that mistakes on the event’s special test would be costly, David made a cautious start to the day and placed third on the opening test. Just one-second behind the fastest rider Si Wakely, David then placed fifth on the second test having staled his bike in one of the tight, rutted turns. The second test was won by won by TM mounted Frenchman Rodrig Thain.

Close to four seconds behind Si Wakely in the overall results with only the final special tests remaining, David comfortably cleaned the event’s tight time control after completing the rough and sandy 41-minute loop notably faster than any other rider.

With the third and final special tests set to decide the event’s finishing order Knight made sure he didn’t make any mistakes. Feeling more and more comfortable on the test with each passing lap Knight set a time close to seven seconds quicker than any other rider and in doing so moved to the top of the results and claimed victory at the Muntjac Enduro.

David Knight: “It’s great to start my return to the British Enduro Championship with a win. The Muntjac is a tough old event, especially because there are two tests early in the day and then one right at the very end. It’s the type of special tests where it’s hard t pull any real advantage but easy to lose time if you make any mistakes. I didn’t make too many mistakes but the first test was really slippery. I tried to push hard in a few corners and almost came off, so I took it easy.

“The second test was much better. There were a few lines in the corners, which made it a lot easier. I was going well but then I stalled it in a corner, which made it hard to keep my rhythm. I knew that me performances were going in the right direction, and although I didn’t win that second test I was quite confident that I could go a fair bit quicker in the last test.
“The unique thing about the Muntjac Enduro is that after your first two tests you have all day to think about the last test because you don’t ride it again until right at the end of the day.

“The tight time controls sorted me out. I knew that I wouldn’t lose any time. The final tight time control was great – I knew I was up on time so I took it steady during the second half. I was able to carry that pace into the final test. I’d also made a few small adjustments to the bike, which helped, so I felt good during the last test. I knew I needed to do and had a good run. I guess not winning the first two tests meant I had it all to do in the last one but that’s the way it goes with a test like this. I didn’t win the first two but I wasn’t too far behind. If I’d have pushed too hard too soon there’s a good chance I would have made a mistake, crashed, and then winning probably wouldn’t have been possible at all.”