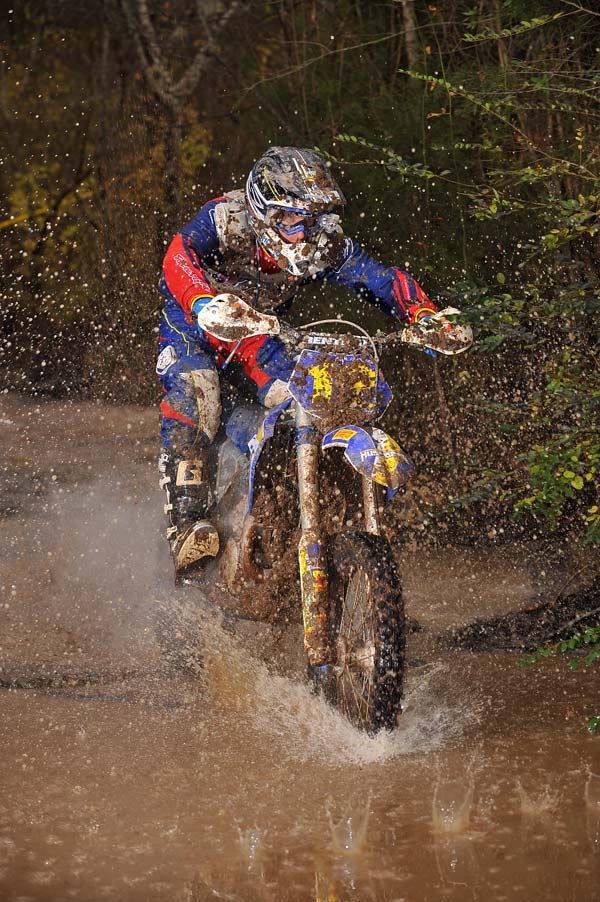 A month after the series kicked off on a beautiful autumn day, round two of the new Parts Unlimited Off-road Motorcycle and ATV Winter Nationals began living up to its name, with cold, cloudy weather greeting competitors at the Motion Pro Bone Yard Cross-country National, round two of the series. But it didn’t rain or snow, unlike other parts of Tennessee, which made for nearly ideal riding on Ricky Doores’ farm on the outskirts of Nashville.

Zach Klamforth recovered from a few spills to win round two of the Parts Unlimited OMA Winter Nationals, the first time he’d ever ridden Pro.

When the checkered flag fell, Ohio’s Zach Klamforth was at the head of the pack on his Sport Cycles Racing/Enduro Engineering Suspension/Moose-sponsored YZ250—a rather unexpected result in light of the fact that this marked the first time he’d ever stepped up to the Pro division.

“I got the holeshot and crashed in the first turn, then I crashed over there in the woods—hit a tree and got tangled up, like my foot got caught in the tree and everybody got by me—and then I started picking people off,” he said.

Husaberg’s Nick Fahringer led the middle stages of the race on his Pirelli/Motorex/Troy Lee Designs FX 450 after getting a horrible start. But he got a bit complacent, allowing Klamforth to sneak up and catch him as they both pitted. Due to having a dry break, Klamforth had the faster pit, as Fahringer’s bike retained the stock screw-on gas cap. Though the pass woke Fahringer up, he wasn’t able to repass and had to settle for second.

After getting off the line last, Nick Fahringer led the middle portion of the race but then grew complacent, which allowed Klamforth to catch him napping. A slower pit stop put him in second to stay.

In the meantime, RM250-mounted Shane Klimek had his hands full with Moto-X Dreams/Factory Connection KX250F rider Nathan Alering. A veteran of OMA races, Klimek held the upper hand in the end as OMA first-timer Alering eventually dropped back, unable to thread through the single-track quite as quickly.

Shane Klimek had his hands full with Nathan Alering for a while but ended up pulling away to a secure third place.

Gas Gas EC 250-mounted Daniel Janus was fifth overall and took both first A overall and the Open A victory after a tight battle with fellow Open A racer Charlie Deutscher on his YZ250 and Lite A winner Derek Spangler, who lost the rear brake on his WR250F in the late going.

Harvey Whitaker made it to the finish in eighth with a nearly collapsed rear wheel on his Husaberg FE 570, but he still bested Yamaha-mounted Ralph Feld for the 40+ A division win. Newcomer Robbie King rounded out the top 10 overall and was fifth Pro aboard his North Texas Yamaha/SMS Racing/Hinson YZ450F.