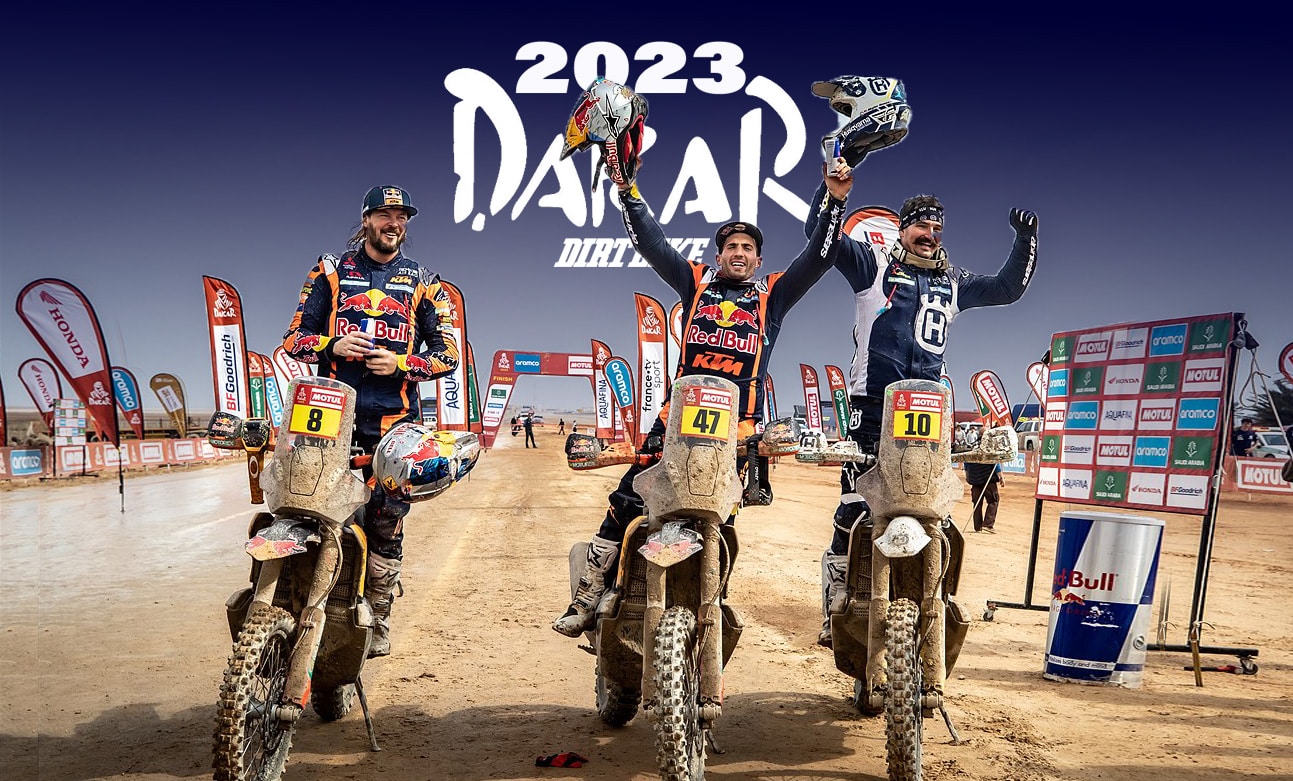 After taking the win on the last two stages, Kevin Benavides has won the 2023 Dakar rally. The start order was reversed for the final day of racing from Al Hofuf to Dammam, so the Benavides and Toby Price set off back to back at the tail end of the pack with Benavides leaving three minutes ahead of his teammate. American Skyler Howes started in front of them both, but could not make up the time he needed to take the big prize. Although the final timed special had been regarded as a relatively simple sprint to the finish, the 136 kilometers of gravel tracks, sand, and dry lake beds threw up a considerable challenge to all riders.

Kevin Benavides: “It’s been an amazing day! I just focused on every kilometer from the first to the last. I didn’t think about the position or the result I just gave my 100 percent over the whole stage and tried to enjoy the day. The special was really fast and tricky, and so muddy – thankfully I didn’t make any big mistakes, but it would have been easy to have an issue out there today. I have worked so hard for this. This year’s rally has been one of the closest ever and there wasn’t a single day where you could afford to ease off. I couldn’t have done it without the support of my team, and all my family and friends. It’s going to take a little while to sink in, I can’t describe this feeling right now.”

A couple of issues early in the stage cost Toby Price the valuable seconds he needed to stay in front, and despite clawing back close to one minute on the latter half of the special, it wasn’t quite enough to overhaul the flying Benavides.

Toby Price: “The first point is disappointment. We’ve come so far, but look, Kevin’s done a great job. Just a little frustrated that, on the last day, they played with these 20-metre rules for the waypoints, and I had to turn back and get three of them. Yeah, hard to take at the moment, but at the end of the day I’m going home in one piece and we got a Dakar trophy. It hurts a little bit. Kevin said he only had to turn back for one waypoint, I think the two waypoints I missed kinda cost us the race. 2023 has definitely kicked off a lot better than 2022.” 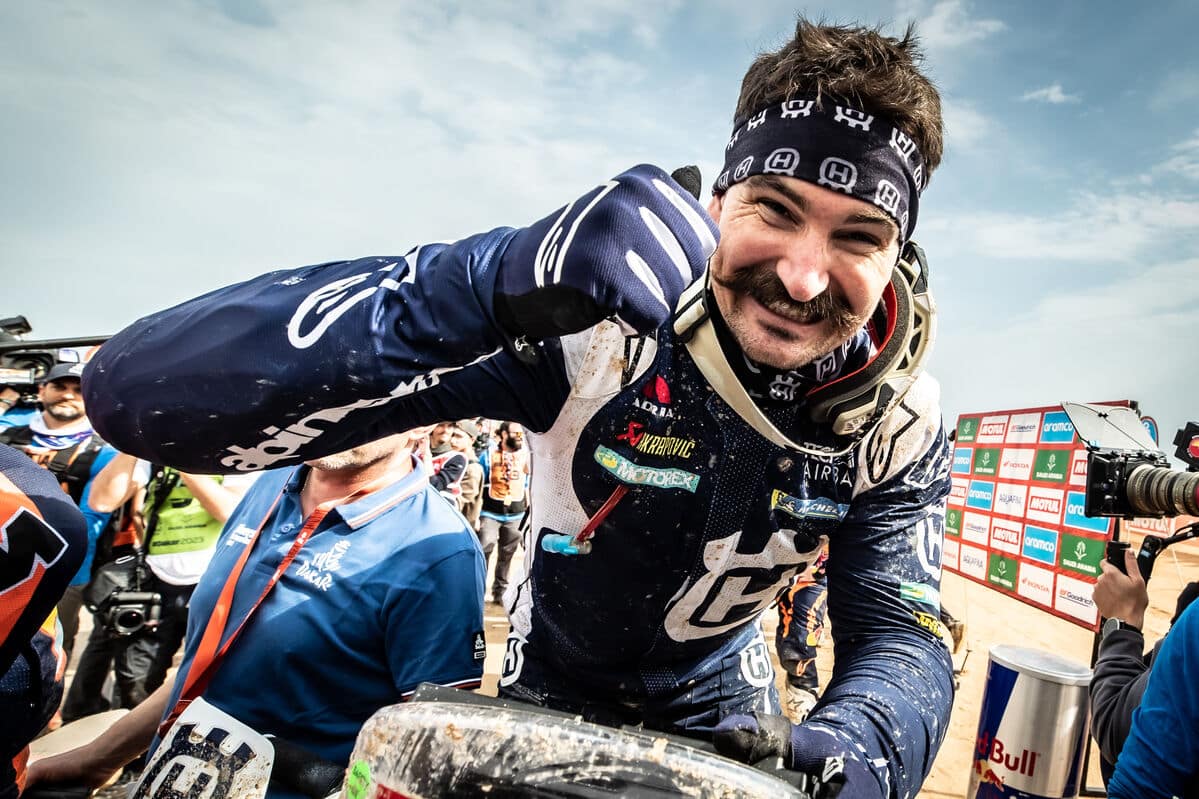 Coming into today’s 14th and final stage, Howes trailed the leader by just one minute and 31 seconds – an incredibly narrow margin after well over 43 hours of racing. As the third-to-last competitor to set off into the special, Skyler had a comfortable advantage over the fourth-placed rider and knew, with the two front runners fighting it out behind him, a smooth, calculated ride to the finish was all that was needed to secure his podium result.

Completing the final stage as fifth fastest, Howes was overjoyed with his overall result of third place on what was his fifth Dakar Rally appearance. In just a few years, the 30-year-old has gone from promising privateer to top-three Dakar racer. His podium at this year’s event added to his excellent 2022 season results bode well for Howes as he now looks ahead to the rest of the FIM World Rally-Raid Championship season.

Skyler Howes: “I am so happy! It’s been an incredible race with highs and lows, and it’s come right down to the wire on this final day. I knew the guys behind me would be pushing so hard today, and to go into this final day less than two minutes behind after well over 40 hours of racing is incredible. I arrived at the finish safely, and it feels like a dream come true and such an honor to share it with two legends like Toby (Price) and Kevin (Benavides). Everyone knows what you have to go through to get to this point, and after all that hard work, it makes this moment feel so sweet. Of course I want to come back and see what the other two steps of the podium feel like. But to now be one of five Americans to reach the podium at Dakar, it feels amazing.”

Jacob Argubright: “After almost sliding/swapping out on a short really greasy final beach stage I decided to enjoy the scenery a bit and enjoy my last racing moments in @dakarrally 2023 and finished P24. P22 in the final general classifications and I think P8 in Rally2. Not quite the result I hoped for in the end with some mechanical issues in the beginning but I am tremendously proud of my effort I put in everyday and my Duust.co rally team these past 2 weeks. Dakar is the coolest racing adventure ever and it will test you in every way mentally and physically. I feel like I’ve been here for months in this weird bubble of time where I don’t know what day it is and a sit here back hurting from the uncomfortable liaisons I am already thinking about next year and how it can’t come soon enough.  I want to thank all the people that invested and donated to my first Dakar effort, seriously it takes such a village of people and I’m proud to have each and everyone of you who donated or just chatted with me about this adventure, thank you so much. Ready to head home to see my family and doggos.”

For stage by stage results of the 2023 Dakar Rally, click here.